You’re always told to reach for the stars, and that’s exactly what 12-year-old Kate Jones plans to do one day. But for now she’s mapping a path with the help of the Girl Scouts’ new STEM badges. Visiting the NASA facility in Alabama and completing a mission earned Kate her STEM badge with the Girl Scouts of Eastern Oklahoma and a memory to last a lifetime.

TK: How long have you been a Girl Scout?

Kate: I joined Girl Scouts in kindergarten, when I was 5.

TK: How did you receive the STEM badge?

Kate: I went to Space Academy this summer through Girl Scout Destinations.

TK: What is the NASA Destination?

Kate: Girl Scout Destinations are adventures for Girl Scouts ages 11 and older. You apply by completing an application, writing an essay and getting references before you are accepted. The trips are individual as opposed to a troop activity. The destinations are a little further from home compared to where you would go with your troop, and they have all sorts of options to choose from. They even have international trips that I can apply for when I get a little older.

TK: Could you tell me more about the Space Academy?

Kate: Space Academy is at the U.S Space & Rocket Center, a NASA facility in Huntsville, Alabama. I was there from a Sunday to Friday in June and went with my friends Avery and Lucy Claire. Those attending camp are called Trainees and the sleeping area is Habitat I, II or III. There were 12 girls in my group, and we were called Team Intuitive. Our team worked together and completed two missions. I was Station Commander on one and CAPCOM on the other (which stands for Capsule Communicator). CAPCOM in responsible for communicating with the astronauts in space and mission control on Earth. We also trained like an astronaut on the Multi Axis Trainer (MAT), which is the chair that spins. We used the 1/6th Gravity Chair, which simulates how it would feel to walk on the moon. When we were at the airport in Huntsville waiting on our flight back to Tulsa, we met an astronaut. His name was Clayton Anderson, and he gave us an autographed picture. We did some research and found out that he logged over 38 Extravehicular Activity (space walk) hours. I learned that he was rejected 15 times by NASA before being accepted into the astronaut program in 1998. Just shows that you should never give up!

TK: What are your hobbies and interests?

Kate: I love animals and enjoy walking my dogs, learning about space and collecting rocks. I like camping and hiking and love going to Camp Tallchief (Girl Scout Camp) each summer. At school I am in the Middle School Honor Choir, I play the flute, run cross country in the fall and play soccer in the spring. I am also a member of National Charity League of Greater Tulsa.

TK: Where are your favorite places to learn about STEM and space in the Tulsa area?

Kate:  With Girl Scouts of Eastern Oklahoma and First Lego League, I have been on a Robotics team where we competed against other fourth through eighth graders in the Tulsa area. I’ve gone to the Tulsa Air & Space Museum with my Girl Scout troop where I made and launched a rocket, played a space simulator game and went to a show at the planetarium. I also learn a lot about STEM at Holland Hall. During fourth grade, I was in the Science Club and attended a science campout where an astronomer spoke with us about stars and space, and let us look at constellations through her telescope. We also went digging for crystals in the Great Salt Plains. For the fifth grade Engineering Fair I made a Rube Goldberg machine that had many steps before completing the simple task of unzipping a 6” zipper. In sixth grade, my friend Amber and I chose to research gemstones for our Genius Hour project in Science. We interviewed three geologists at Atalaya Resources in downtown Tulsa and a geology professor at the University of Tulsa. They were all so helpful, and we learned a lot from them!

Kate: My parents. They inspire me to keep trying, and they always support me. They take me to neat places. My mom volunteers her time at the school, with Girl Scouts, NCL or helping with any activity that my brother and I are involved in. My dad is an engineer, so I probably got my love and curiosity for STEM from him. My teachers, Girl Scout leader, family and friends also inspire me.

TK: What are your plans for the future?

Kate: Currently, my goal is to either attend Colorado School of Mines and major in Geology or attend the University of Hawaii and major in Astronomy. Or perhaps I could combine them and major in Planetary Geology.

Kate: I was born in Tulsa, but moved to Egypt when I was 4 years old and lived there for three years. We then moved to West Texas for two years before moving back to Tulsa in 2015. My parents like to travel, so I have been to a lot of interesting places. A favorite memory is going to Istanbul, Turkey, on my 7th birthday. The food there was amazing, and everyone was so nice! 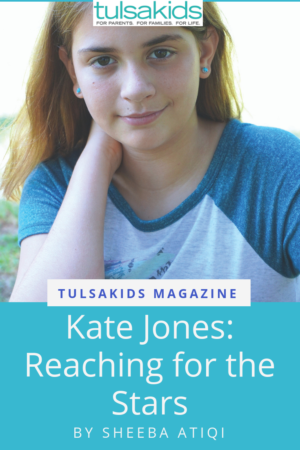