How We Manage a Pescatarian Diet in a Busy House:

One thing people ask us about pretty frequently is how we manage a busy life on a pescatarian diet. Two of our kids, Arthur and Lucy, do not eat meat products outside of fish. I wrote about this last year, but basically Arthur doesn’t eat meat for ethical reasons pertaining to the treatment of animals and the carbon footprint of eating meat. He converted Lucy to his hippie ways, leaving us with a 2 to 3 split between carnivores and pescatarians.

Guess who determines what we eat most of the time?

Although it was frustrating at first, we really don’t think much about it these days. We’re not the healthiest family around, but we do try to be cognizant of the content of our food and keep meals fairly healthy.

After having two more people this week ask about how we manage the pescatarian diet with busy lifestyles, I decided to put some notes together and blog about it.

Here are a few ways we manage to get by most of the time without meat. This isn’t to be taken as health advice, but more as “here’s the good, the bad, and the meh” of living with a fish-heavy but otherwise meatless diet.

This was a little tricky when they were younger because they were both too timid to articulate what they wanted in the school line. I did call the school and talk to the lunch manager, but that wasn’t very helpful. I wanted to make sure the kids could ask for extra veggies on the days there wasn’t a meatless option, but this ended up with the lunch staff thinking my kids were vegetarian, which meant they got a salad and Cheez-Its no matter what was being served, which meant they weren’t really getting enough nutrients in their diets. These days, they are judicious in what they select and they’re responsible for making sure they get enough to eat. I rarely make school lunch because their entire school is on a free lunch program, so it doesn’t make sense economically if they can get a healthy lunch at school.

2. Breakfast is the easiest meal.

For the most part, we rarely have meat with breakfast anyway. During the school year, the kids have breakfast at school unless we’re running late, which is more often than I’d like to admit. At home, we mostly eat what anyone else would–cereal, fruit, eggs, and that sort of thing.

This falls under the “meh” category. Because we are very busy, we end up pulling from the same go-to menu items pretty frequently. Like many working parents, we don’t have a lot of spare time, which means in order to get everyone to bed on time, we sometimes end up doing only quick grocery store runs and then cooking fast meals.

Because it’s so incredibly versatile and doesn’t require pre-cooking, our pescatarian diet involves eating an awfully lot of canned tuna. It’s usually on the menu about two or three times a week, so probably not enough to have to worry about mercury poisoning. It’s one of our family’s favorite foods, and every time we have cheesy tuna casserole, almost everyone helps themselves to a little extra.

We’re pretty guilty of eating at odd times, which means we’ll sometimes have lunch very late in the afternoon or dinner at an early hour. If we just let the kids munch on granola bars and the like when they were hungry, they would just keep eating them, so we do keep easy-to-heat foods around for when we’re a little extra hungry but it’s not quite time for a meal. A few of our favorite no-meat toaster oven options are toasted cheese ravioli, mozzarella sticks, and Morningstar corn dogs (which are great because we keep a box of the meat kind around for us carnivores to get our fix).

6. Fast food is not too hard if you have your go-to options in mind.

We don’t eat a lot of fast food, but with three kids, you do sometimes end up in a situation where you have to be somewhere in 20 minutes and if you don’t eat in the car, you don’t eat. For a long time, these moments were really stressful because it was hard to figure out where the kids could get food options that were meat-free other than fish sandwiches, which start about $4 each at most places.

These days, we’ve figured out which fast food options are easy, meatless, and cheap. Here are a few of our pescatarian diet staples:

7. We have two set meal traditions.

If you’ve been reading my blog a while, you know we spent a few years living below the poverty level, something that only changed when I left my job in education this fall. Once our pay started to improve, we decided to give ourselves a break by having two easy meal nights a week. On Wednesday nights, we get half-price sushi from Reasor’s and eat it family style. Our kids love sushi. On Fridays, we almost always have pizza, which is perhaps the easiest food possible.

8. We stick to simple menu items.

If you’re not sure what to pick up at the store, here are some of our regular rotation menu items. This isn’t necessarily the healthiest, most well-rounded menu, but it is an easy, functional menu for people who barely find time to shower. If you fall into that category, I hope this helps. We also keep staples like Pasta-roni on hand.

Do you manage to somehow balance a pescatarian or other special diet with a chaotic life? How do you get by? Leave me your favorite suggestions and recipes below and thanks for reading. 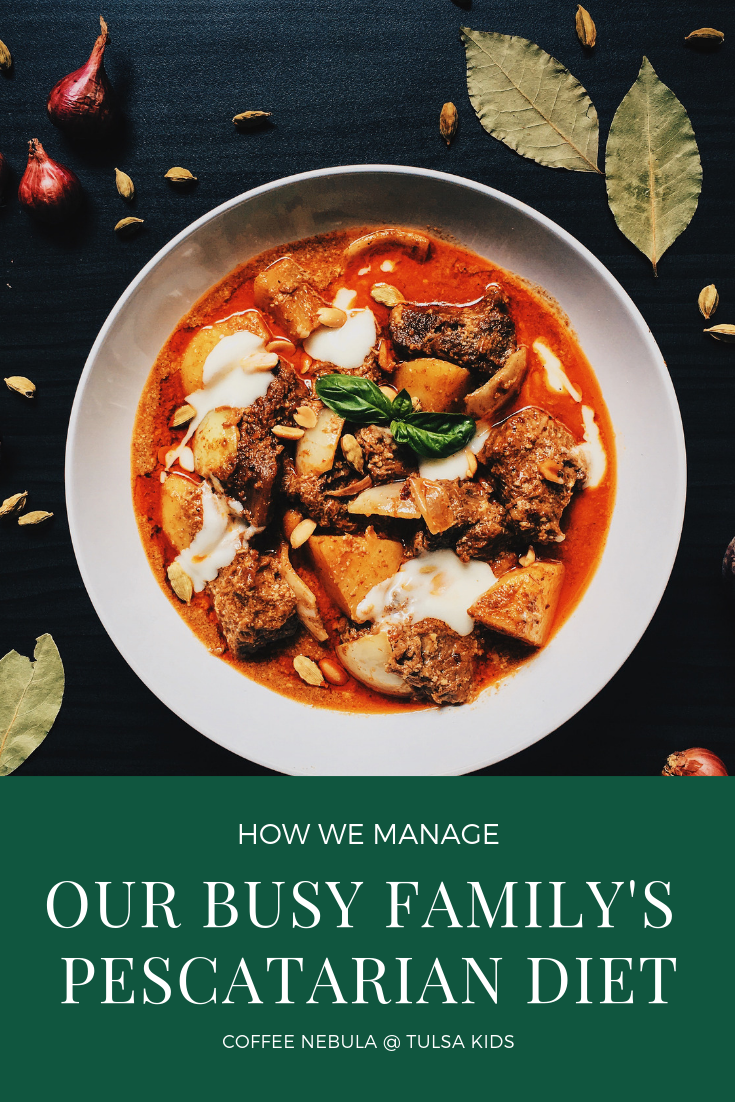