Here We Are Once Again…

How to talk to kids about White supremacy

I had hoped to write a somewhat lighthearted blog about how dogs are like kids, but I don’t feel lighthearted today. Like you, my heart is heavy with the reality of two mass shootings, one in Texas and one in Ohio. Those followed a shooting at a festival in California.

In his remarks this morning, President Trump condemned hatred and White supremacists. He also cited violent video games, the internet and mental illness as contributing factors in the mass murders. I know that some of these domestic terrorists use the internet to connect to other White supremacist terrorists in the United States. Certainly violent video games and mental health problems may contribute to violence, but other countries have these three things without having mass murders. The one difference is that people in the U.S. have easy access to guns, even military-style rifles.

As I drove to work this morning, I was listening to 1-A on NPR. A Puerto Rican mom called in and said she and her husband moved from Philadelphia because they were afraid that their two sons would be the victims of crime. They moved to a smaller city, hoping to feel safer. She said that while most people she meets are nice, her sons have been taunted at school. They are asked if they’re Hispanic or Middle Eastern. She has been told that she “speaks good English,” even though she and her family members are American. She said one of her sons was riding his bike to the grocery store this morning and she texted him to be careful, to not act “weird” or do anything “weird” to call attention to himself. She is fearful for her son just riding his bike.

All parents must be thinking about how to explain or comfort children in the wake of these types of incidents. They happen far too often. Kids are taught to be vigilant. As they start school, they’ll probably be taught what to do if an intruder enters the building. I know I have started looking around for exits when I’m in a public place, or thinking about what I would do if a shooter came to the farmers’ market or other outdoor gathering. I worry about my adult children going anywhere. I’m white. They’re white.

But what if I had children of color like the NPR caller? Hearing her story made me think that my own worries are miniscule compared with hers. What would I say? How much greater would my fear be if my children had a darker skin color?

An article in COLORLINES that was written after the White supremacist march in Charlottesville talks about what to say to children post-Charlottesville, but I think the points are relevant to the recent mass murders as well. The article, “The Dos and Don’ts of Talking to Kids of Color About White Supremacy,” gives parents of all colors some suggestions. The author, Hilary Beard, writes, “Now is not the time to tiptoe around tough topics or give your children unclear messages about your values and beliefs or the realities of what happens when bigotry and terror suddenly escalate.”

The Dos and Don’ts in the article are great suggestion for parents of all colors, including white. I suggest reading the full article, but here are the tips, edited for length:

Do put on your own mask first. Your children will pick up on your anxiety if you don’t.

Do reflect on your experiences with bias and bigotry. Many parents struggle with what to tell their children about difficult topics because they don’t want to pass along their own baggage and unresolved issues, so they don’t talk about the subject at all. Thinking about your history with these issues will help you clarify the values you want to convey and the behaviors you want your children to demonstrate.

Do protect them from your own internalized bias. Beard suggests taking the Implicit Association Test, which measures unconscious, or implicit, bias that you hold around race, gender, sexual orientation, mental health and other dimensions of the human experiences. It helps you become aware of your own feelings and behaviors.

Don’t wait for your children to initiate the conversation about what happened in Charlottesville. I would expand this to any mass murder attributed to homeland terrorism. Beard suggests asking them what they’ve seen and heard. Reassure them that they and their loved ones are safe and that you will take care of them. Use age-appropriate language, explaining to younger children that sometimes people are mean and unfair to different groups of people and you don’t like it.

Do ground your children in a worldview that includes their spirituality, family traditions, heritage, cultural values and self-respect. Beard says it’s never too early to start. The story you tell your children about who they are must be stronger than the story they hear from the people who don’t care about them.

Don’t perpetuate the myth that we live in a colorblind society. Everyone is not treated the same, and race and color do matter and America is not a meritocracy where they will succeed if they just try hard enough. Even if you believed this in the past, those ideas lack credibility today.

Do teach your high-school student about institutional and systemic racism. Understanding the various dimensions of racism and bias will help keep your young adult from internalizing structural factors as either their own or their identity group’s deficiencies.

Do proactively discuss encounters your children may experience with racists and other bigots. …if your child is bullied, harassed or told that they are not welcome at their school, notify the administration immediately. Help your children understand that federal civil rights laws protect them from hate speech, violence and bullying.

Do counteract messages that children of color aren’t as smart or innocent as their White counterparts. Many schools begin sorting students into academic levels in the third grade. Racial hostility toward Black boys from both adults and their peers increases significantly during the tween years. Misperceptions such as Black boys being viewed as being older than they are and Black girls being viewed as sexually mature and less innocent than their White peers leads to the children being vulnerable to mistreatment.

Don’t shut down your teenager’s urge to debate you on difficult social issues. As long as your young person maintains a respectful tone, consider leaving room for constructive pushback. It helps develop critical-thinking skills. It teaches them that their opinions matter, and you will gain insight into what’s on their mind.

Do role-play to help them practice what to say during stressful encounters. Help them come up with a response to a classmate telling them to go back to their country, to Islamophobic remarks from a teacher or a transphobic street bully.

Don’t be silent on issues of misogyny, xenophobia, homophobia, ableism, religious intolerance or other racial or social-justice issues. Model for your children that they should not put up with bigotry, whether it’s directed at them or others. Arm them with strategies to use in different environments.

Do teach your adolescent to be aware of their surroundings. Teach them to recognize the iconography of Neo-Nazism, White supremacists and other hate groups. If you have a college-bound student, read and share the Southern Poverty Law Center’s publication about how the alt-right operates on college campuses.

Do teach older students media literacy. This will help them dissect biased images and messages, debate stereotypes, stand up for themselves and manage conflict and stress that can arise when others challenge their identities.

I hope you will read Beard’s complete article, no matter what your skin color. If you feel helpless in the face of the lack of gun legislation, there is a chapter of Moms Demand Action for Gun Sense in America that meets in Tulsa. Moms Demand Action is a national organization modeled after Mothers Against Drunk Driving (MADD) that supports common-sense gun safety legislation. It originated after the children were killed at Sandy Hook. The next meeting is Sunday, August 11 at Southminster Presbyterian Church Community Building, 3500 S. Peoria, 3-4 p.m. RSVP here. 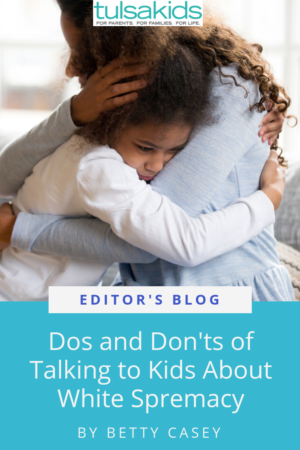