Have You Seen This Wizard?

If you missed the Central Library's Harry Potter New Year's Bash earlier this month, here are some things the Library did to create a fun and magical experience.

A couple weeks ago, the Central Library threw an incredible Harry Potter party, which I think may become an annual event–so keep your eyes out for information next year! There were hundreds of attendees and fairly long lines, so I was glad we showed up early for the Tulsa Zoo’s Care of Magical Creatures class because this meant we got to go through the lines before the floods of witches and wizards arrived (and probably got a better parking spot! From now on, I am always going to show up an hour early before any event.)

There were several activities stations set up throughout the party area: the Three Broomsticks, which served free popcorn and magical snacks, a Sorting Hat Ceremony, where a witch placed a sorting hat on your head and you reached into a cauldron of buttons to choose your house (no peeking!), Ollivander’s Wand Emporium, where kids could try out various wands–and a witch with an iPhone had a speaker make different sounds depending on whether or not the wand was well-matched with the child, a Hogwarts-House-colored-scarf-making station, coloring stations, a photo booth and more! 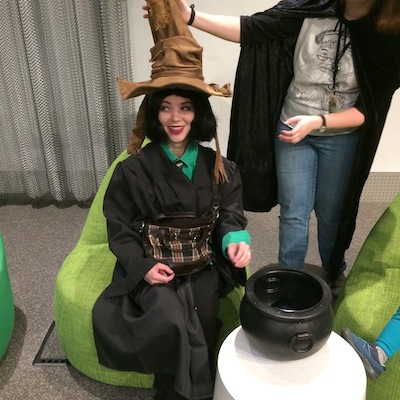 In case you want to throw your own Harry Potter party, I thought I’d link to a few DIYs so you can replicate some of these activities at home.

These simple felt scarfs were based off of a No-sew Rainbow Scarf tutorial found here. Whether or not you’re into Harry Potter, this is a fantastic craft to do with kids! It is easy, practical and should be cheap. I’ve been making Joss wear his Slytherin-colored scarf every day since the deep cold hit.

The hardest part is cutting out a bunch of circles–and I couldn’t BELIEVE that the library had pre-cut and organized all the scarf materials! The amount of work that went into this party was truly astounding, and I am grateful to the library staff and any volunteers who may have helped for doing this for the community. Here’s a picture of Joss wearing his finished scarf: 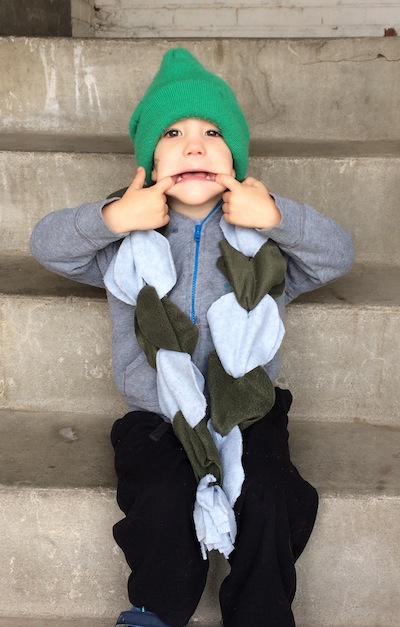 Wands for Witches and Wizards

The library had also pre-made all of the wands!! This involves using hot glue to make handles and wand-like decorations on chopsticks and painting them in a variety of colors. A very simple project–but time consuming when you have to make a couple (few?) hundred! I do want to make my own wand someday, so if you’d like to, too, here’s an easy tutorial.

If you want to up-the-ante on your wand-making skills, check out this tutorial from one of my favorite blogs, Epbot, for a light-up wand. My favorite thing about this second tutorial is that it uses Paperclay to fashion a handle–which looks a lot nicer than just using hot glue. (Epbot has a ton of amazing Harry Potter content, including recipes, a tutorial for making a life-size thestral, and–my favorite–a mandrake-root Valentine bouquet! So if you want to throw the ultimate-ultimate Harry Potter party, just head over there and get inspired! As someone who is not terribly crafty, though, I do like the idea of just grabbing chopsticks, hot glue and some paint. That I can handle.)

The photo booth accessories used at the library looked similar to these; you can purchase the digital downloads on Etsy for just $7.12 but need to print them out yourself. Here’s a link to a “Have You Seen This Witch?” frame prop digital download for just $4.13; the same Etsy shop has a Wizard option, too. 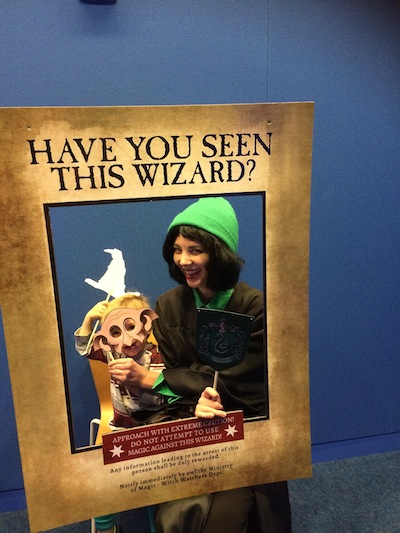 Have you seen this house elf?

What Harry Potter party is complete without butterbeer? I think the easiest way to make a tasty butterbeer beverage would be to buy some butterscotch-flavored syrup, club soda and heavy cream. Basically, a butterscotch-flavored Italian Cream Soda. If you want to make a fun milkshake version, check out this video by Rosanna Pansino of Nerdy Nummies (although I have tried to make milkshakes at a party before, and let me tell you, making milkshakes for a group can be time consuming!)

The Central Library also made chocolate frogs packaged in authentic-looking Chocolate Frog Boxes, which would be easy to do using this frog mold and melted chocolate. I’m sure there are multiple online sources for Chocolate Frog Box templates, but I like that this one on Etsy because the digital download includes various wizard cards, just like the Chocolate Frogs in the Harry Potter universe. You can also find Bertie Bott’s Every-Flavored Beans templates that can be filled with regular jelly beans packaged in small ziplocs, which is what Central Library did.

Thanks again to the Central Library for hosting this event! It was so fun to see the kids dressed up like Harry Potter characters–including a sleeping baby Harry! I love how Harry Potter continues to bring people together and give them something to get excited about, even 20+ years after the first book’s publication!

Have you thrown a Harry Potter party? Tell us about it! What are some other easy DIYs you’d recommend?