Keeping your child from being a victim.

Like many Oklahomans, Casie Brim has been around guns her entire life. When she was growing up, she understood exactly how dangerous they were and was given extensive safety training. There was nothing glamorous about it. “Guns were taken very seriously in our household,” Brim said. “We knew everything about them. Even with our toy guns, water guns even, we were never to aim them at each other.” She models that same level of seriousness in her own home now: treat every gun as if it is loaded.

What has always been a hot button issue has reached a boiling point in recent years, with both sides of the gun debate pushing their agendas even farther. Last month, President Obama issued an executive order to close loopholes in Internet and gun show sales. Other measures included added funding for 200 new ATF agents, and increased mental health treatment and reporting to the background check system. The New York Times published a poll in October that revealed 92 percent of Americans would favor background checks for all gun buyers.

While those measures are primarily geared toward keeping guns out of the hands of criminals or those who may be dangerous to themselves or others due to mental illness, they do very little to remind responsible gun owners about the dangers of unsecured firearms in homes. Oklahoma ranks high in the number of children accidentally injured by firearms.

The most recent data from the National Center for Health Statistics released in 2013 shows that Oklahoma reported the 8th highest number of gun deaths in the country. The Center for Disease Control and Prevention (CDC) reported the leading cause of death for ages 1-14 in 2014 was unintentional injury. Of those unintentional injuries, the 10th and 9th leading causes were unintentional firearm injuries for ages 5-9 and 10-14 respectively. Unfortunately, 2013 is the last year of reported data because of a congressional ban on gun violence research performed by the CDC. Without current data, it is nearly impossible to track the number of gun deaths the country experiences now.

One of the organizations aiming for congressional legislation strengthening gun safety measures is Mothers Demand Action for Better Gun Sense (MDA), which formed after the Sandy Hook Elementary School shooting in Dec. 2013. It is a grassroots movement comprised of mothers, grandmothers, and dads who want a safer world for their families. Judy Brown, a local representative for the group, explains that the organization’s main goal is to educate people about gun safety and to push for legislation that would eliminate gun-related violence in their lifetime. MDA speaks to a number of local groups about gun safety using the BeSMART acronym.

The campaign pushes for optimal safety, which means keeping all guns unloaded and locked up with the ammunition stored separately. MDA Research shows that 70 percent of children under the age of 10 know where guns are kept and 36 percent of them admit to handling them when their parents were not around.

Brown believes that children’s natural curiosity can lead them to devastating results when firearms are involved, even when those children have been told to never touch a gun. “Remember when you were kids?” Brown said. “You knew where your parents hid the Christmas presents, some of us even shook them or unwrapped them. All without our parent’s knowledge.”

A New York Times report, “Children and Guns: The Hidden Toll,” investigated the gun deaths of children in households by combing through public records in states where they were available. The Times review found that accidental gun deaths of children are underreported because official records often list the manner of death as a homicide, rather than an accident. In most cases where children had access to guns, children either accidentally shot themselves or shot another child, which was sometimes listed as a homicide.

One consistent pattern discovered by the report was “the almost magnetic attraction of firearms among boys. In all but a handful of instances, the shooter was male. Boys also accounted for more than 80 percent of victims.”

“I’ll ask about pools, or if they smoke, so whether or not they have guns is on that list as well,” Brim said.

Because Brim and her husband are experienced and trained with firearms, they follow strict safety measures for the guns in their home. “It is all part of a mental checklist I go through every day,” Brim said.

For those wishing to learn how to broach the topic of guns in someone else’s home, Moms Demand Action holds educational seminars that give tips for parents and others. While it may be a sensitive issue for some, both Brown and Brim emphasize that a child’s safety is paramount. Brown advises that parents should always keep the conversation about the children, explaining that their natural curiosity could lead them to find unlocked guns, even if they are hidden. If parents discover that the host family does have unsecured guns or suspects that there may be unsafe guns in the home, they can then suggest a neutral spot for the play date or host it at their home without causing offense.

Brim explains that asking about firearms should just be another item on any parents’ list before their children go to new friends’ homes. “I’ll ask about pools, or if they smoke, so whether or not they have guns is on that list as well,” Brim said. “And if you are going to invite someone into your home, you should have no problem answering those questions.”

While the debate over Second Amendment rights continues, Brown and Brim are two Tulsa moms who agree about keeping children safe from firearms in the home. As Brown says, “We all want our children to grow up happy and healthy. We each have the right to make responsible decisions about how to protect our home and families, including whether or not to have a gun in our home. If we can prevent even one child gun death, it is our responsibility to do so.”

Owning a gun is a personal decision, but responsible storage is a public safety issue. Kids and unsecured guns are a potentially lethal combination. Fortunately, a simple conversation can help keep children out of harm’s way. It can feel strange or awkward to bring up the issue of how guns are stored, but it shouldn’t. Here are some things to keep in mind when you start the conversation. 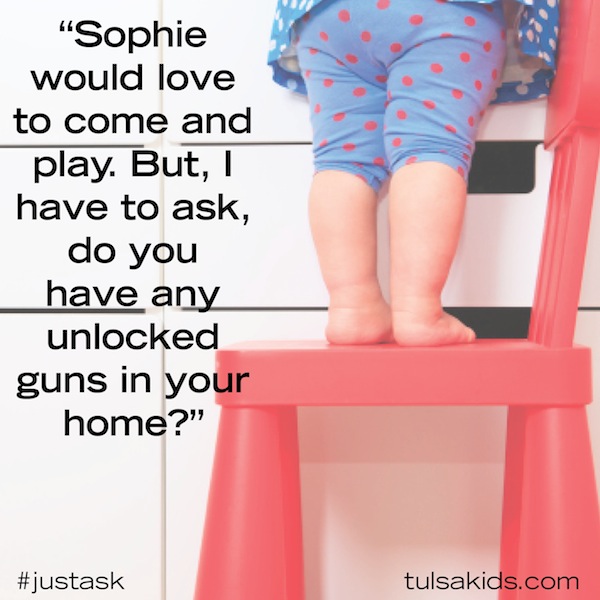 MAKE IT PART OF A GENERAL SAFETY DISCUSSION

DON’T WAIT TO BE ASKED: VOLUNTEER INFORMATION ABOUT YOUR OWN HOME

REMEMBER: IT’S NOT ABOUT THE GUN; IT’S ABOUT WHETHER IT’S SECURED

USE TECHNOLOGY TO YOUR ADVANTAGE

DON’T FORGET TO TALK TO FAMILY