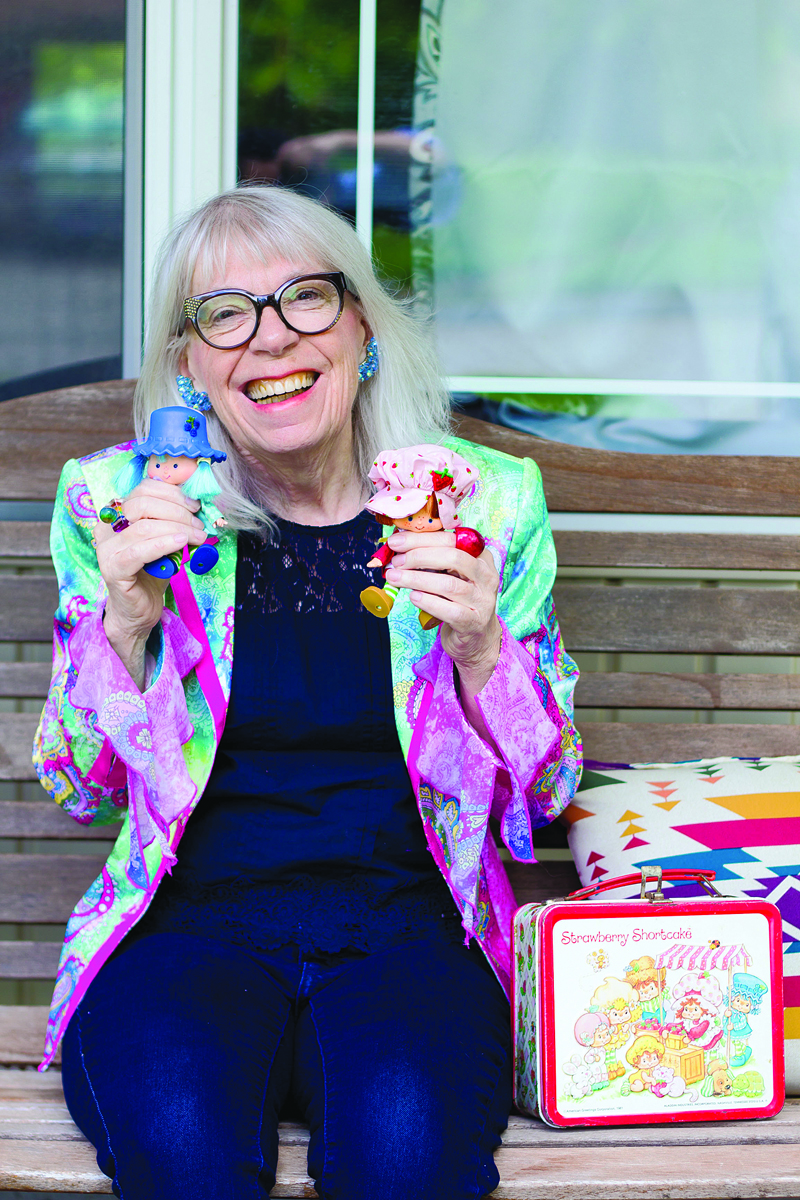 Small in stature and big in creativity, Muriel Fahrion’s artistic ability was evident even at a young age. Being one of seven children, money was tight, so imaginative play and crafting creations from things around the house were primary sources of entertainment.  As she got older, she searched for ways to develop and grow in her artistic ability.

Through hard work and determination, she was a top graduate from the commercial art school she attended, which earned her a spot working for American Greetings card company. During those early years, she was assigned to work on a greeting card line creating characters that she thought would live solely on cardstock. It was only a short time later that the drawings she created – such as Strawberry Shortcake – turned into the characters beloved by so many.

She relocated to Oklahoma several years ago for a job opportunity followed by what she considered “retirement” in Medicine Park, Oklahoma. However, after her husband fell ill with cancer, she moved to Tulsa to be closer to her daughter. Sadly, her husband lost his battle with cancer at the end of 2018. During this difficult time, she has found solace and joy through drawing and creating.

TK: Tell us a little about your childhood.

Muriel: I grew up in Cleveland, Ohio. I was one of seven children and was very quiet. I considered myself the middle child because the first son in our family was born after me. We grew up in a house that was 924 square feet. We didn’t have a lot of money, but there was a lot of imaginative play and creating.

TK: As a child, did you know what you wanted to be when you grew up?

Muriel: I remember my parents asking me when I was very young what I wanted to be when I grew up, and I knew that I wanted to be an artist. I actually said three things: a mommy, an artist and a secretary. I think the secretary part of the answer was that it involved writing. I liked to write stories and poems. I was young when I developed an interest in art and considered myself an artist at the age of four. I could sit and work on things and be very content for hours at a time.

TK: What was your favorite childhood memory?

Muriel: My dad worked for Greyhound most of his career. I remember being in kindergarten and it was my birthday. At that time, he was a bus driver and took me on his bus ride from Cleveland to Toledo – around 100 miles – and sat me in the seat behind him. I enjoyed it very much because it was just me with him. Once in Toledo, he let me pick out a plaid school bag and a storybook doll for my birthday. It was really a privilege to be the only one with him when I was one of seven kids. I remember someone on the bus asking me where my parents were because I was sitting behind him in a seat by myself on the bus. I smiled and replied, “My dad is the bus driver.”

TK: When did you first realize that you had a love for art?

Muriel: When I was 4 years old, I remember sitting under the dining room table and drawing. My parents encouraged it, and it was something that I enjoyed.

TK: To further develop your talent, did you attend art school?

Muriel: I earned a half scholarship at the Coopers School of Art in Cleveland. I showed up, worked hard and would not miss class. That eventually earned me a spot as one of the top five students from the school, who automatically earned a job at American Greetings. Following graduation, I walked into American Greetings and into a job. It wasn’t long before I found my niche in humor and juvenile greetings.

TK: How did the iconic characters such as Strawberry Shortcake come to be?

Muriel: When I worked for American Greetings, I was asked to develop characters for some cards that were considered “promotional” greeting cards – a line that fit between holiday lines. It was fun to work on promotionals. The complete direction for the concept was that they wanted a rag doll character with strawberries, daisies and the color pink. A short time after she was created, it was Bernie Loomis, head of General Mills, who was looking for a girls’ property to promote; several lines were brought in, and he chose Strawberry Shortcake. A little later the corporation formed a new department that was a toy and licensing think tank. I wanted to be a part of that and eventually was able to make that move. The Care Bears concept was generated from that think tank and was developed for licensing.

TK: Have you ever been faced with criticism about your art? How did you handle it?

Muriel: I had a teacher in commercial art school who recognized my talent, but told me that women don’t belong in art. That didn’t stop me. You have to believe in yourself. It’s good to have others believe in you, but sometimes it’s just you and that inner strength – believing in yourself has to be enough.

TK: What advice would you give to others who are thinking about pursuing a career as an artist?

Muriel: I got advice, at a young age, from my dad telling me to find what I really loved to do and do it. For me, it was art. I was fortunate because my parents both recognized and encouraged my passion for art. I found every opportunity to work on and view art. We didn’t have the money, so for my birthday, I would ask for money to pay for the bus fare to the Cleveland Museum of Art. They had art classes that were free of charge.

TK: Where do you find your inspiration?

Muriel: My company is called “Outta Thin Air” and that’s where my ideas come from – outta thin air. I wake up in the middle of the night with a visual in my head, and I have to get it down. It also helps to be removed from your regular situation; vacation can spur on ideas. Recently, I joined a local group called Ink Slingers, and I love their energy. I love to draw or create every day. Strawberry Shortcake was created 40 years ago, and have I continued to create every day since then! It’s something I do that never gets old.

TK: Was there ever a time in your career when you lacked confidence? What did you do about it?

Muriel: Of course, we all get them! I have another artist friend who refers to being down as having a case of the “whim-whams.” When self-doubt creeps in, just know that it doesn’t have to last long! I get past things pretty quickly. When I have the “whim-whams,” I just decide to get over them and move on.

TK: What are you working on now?

Muriel: I am staying very busy working on new characters such as Giggle the Guardian Angel; these will soon become greeting cards sold locally. I taught myself 3D animation and am working on a project using that. I’m also working on commissioned pieces, too.

Muriel: My purpose in life is to bring a little light into the lives of those I meet.

National Strawberry Shortcake Day is this month – June 14 – and Muriel is working with a local retailer to celebrate! Check out details about this event along with upcoming speaking events and meet-and-greets on her social media accounts: Instagram: @outtathinairstudio & Facebook: Outtathinairstudio. 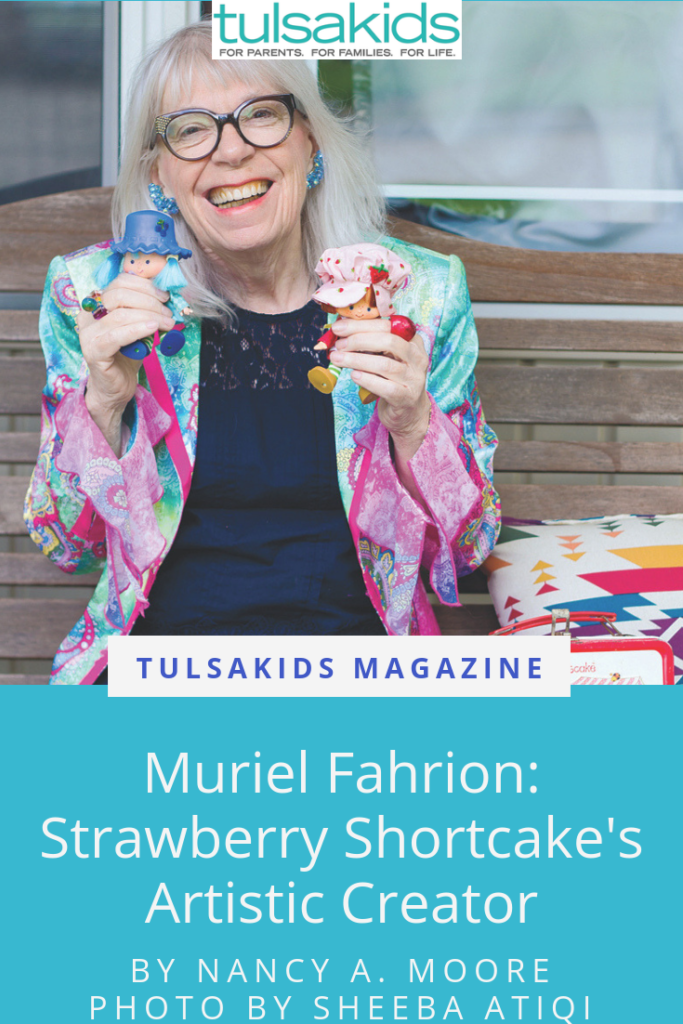