There's nothing like trying one of the Great British Baking Show's infamous technical challenges with the help of a two year old.

I love baking and adore the Great British Baking Show. The GBBS has inspired me to make cream puffs, religieuse, floating islands and more. Appearance-wise, all of my creations would receive an “It’s a bit messy,” from Paul Hollywood, but I’ve always enjoyed eating them. A few weeks ago, I decided to try the Lace Pancakes recipe that was Season 4, Episode 4’s technical challenge. Guess how many ingredients it has? Just five! And that’s including the egg and egg yolk as two different ingredients as well as counting the butter that’s used to coat the pan. Easy, right?

Well, cooking with kids is rarely easy, but to be honest, Joss isn’t at fault for the mangled horrors that resulted from my attempts at lacy perfection. I’m simply not a perfectionist, and I missed watching the first half of Season 4 so was unable to get a head’s up on potential pancake pitfalls. My batter was lumpy, the heat was too low (and then too high), and how do you keep butter from burning?! Nevertheless, these were fun to make and would be a good recipe to make with slightly older kids.

The texture of the pancakes and the fact that they are cooked in butter as opposed to plain ol’ cooking spray reminded me of crepes, and despite the simplicity of the recipe, they were tasty. We ate them plain, but I’m sure they would be good topped with your favorite crepe fillings–lemon juice and powdered sugar, for example, or jam.

Sift the flour into a large bowl and make a well in the middle. In a separate bowl, whisk together the egg and yolk as well as a couple Tablespoons of milk. Pour this mixture into the center of the dry ingredients. 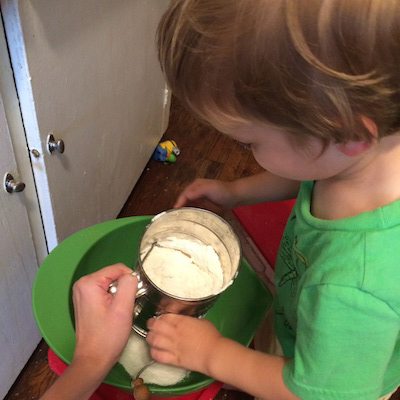 The sifting should have helped eliminate lumps. We dutifully sifted, but it was all to no avail because somebody decided to try building sandcastles in the flour afterwards.

Gradually and gently whisk in half of the remaining milk, incorporating the flour from the outside of the well gradually in order to achieve a smooth batter. Stir in the rest of the milk. Let rest 15 minutes, then pour into squeeze bottle. 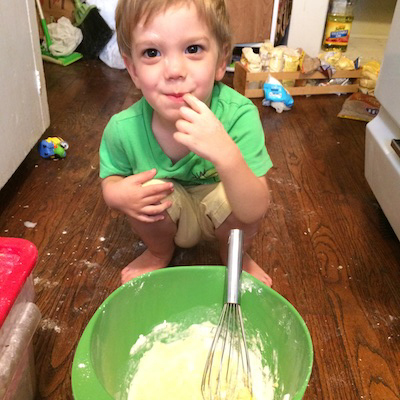 Taste test. Also, an important part of baking with kids is to ignore the fact that everything has been taken out of your pantry and other cupboards.

Heat frying pan over medium heat along with a small portion of the melted butter. When the pan is heated, use the squeeze bottle to freestyle a heart or other shape into the pan. 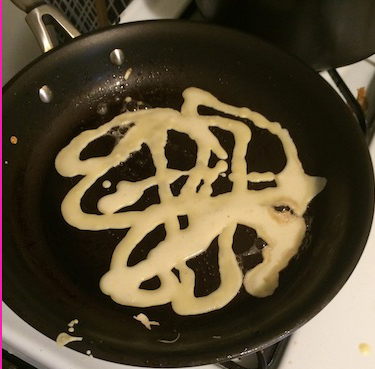 Joss helped with this one. This is why it could be really fun to make these with an older kid!

Cook the pancake until lightly browned underneath, then flip and cook the remaining side until done. 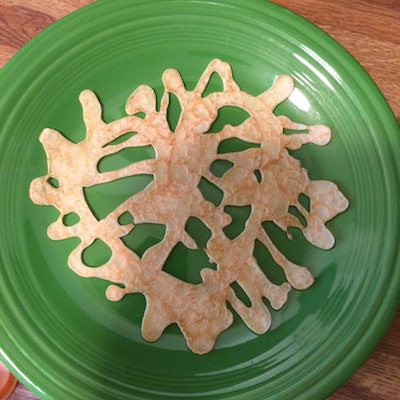 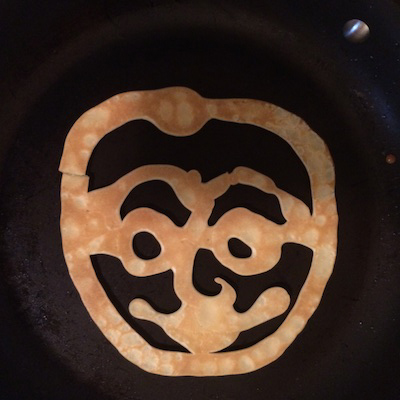 For reference, here’s a picture from the BBC website so you know how these were supposed to look: 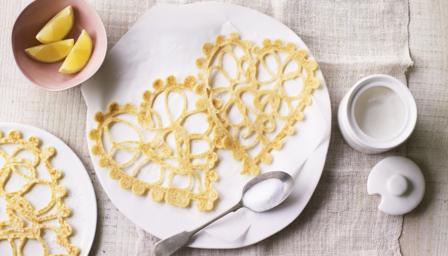 Cooking with kids can be fun and challenging. I like knowing that Joss will be familiar with the kitchen by letting him help stir, whisk, and measure when he can. But to be honest, sometimes I just set him up in the living room with Sarah and Duck or distract him with food.

What recipes do you like to make with your kids? What recipes have you tackled that proved to be more difficult than you bargained for?