If you’re looking for a great place to take your grandkids, I highly recommend the Oklahoma Aquarium located just over the bridge from Tulsa in Jenks. It passes all my “Grandmom Adventure” tests; it’s climate controlled, stroller accessible, has changing tables in the bathroom, a snack bar, benches scattered at good intervals, and it’s educational and interesting to both of us!  We love the Oklahoma Aquarium and, judging by the summer crowds, we’re far from alone in our fandom of fish. Now that schools are back in session we decided to take another visit, and we were rewarded with a sparsely occupied aquarium. 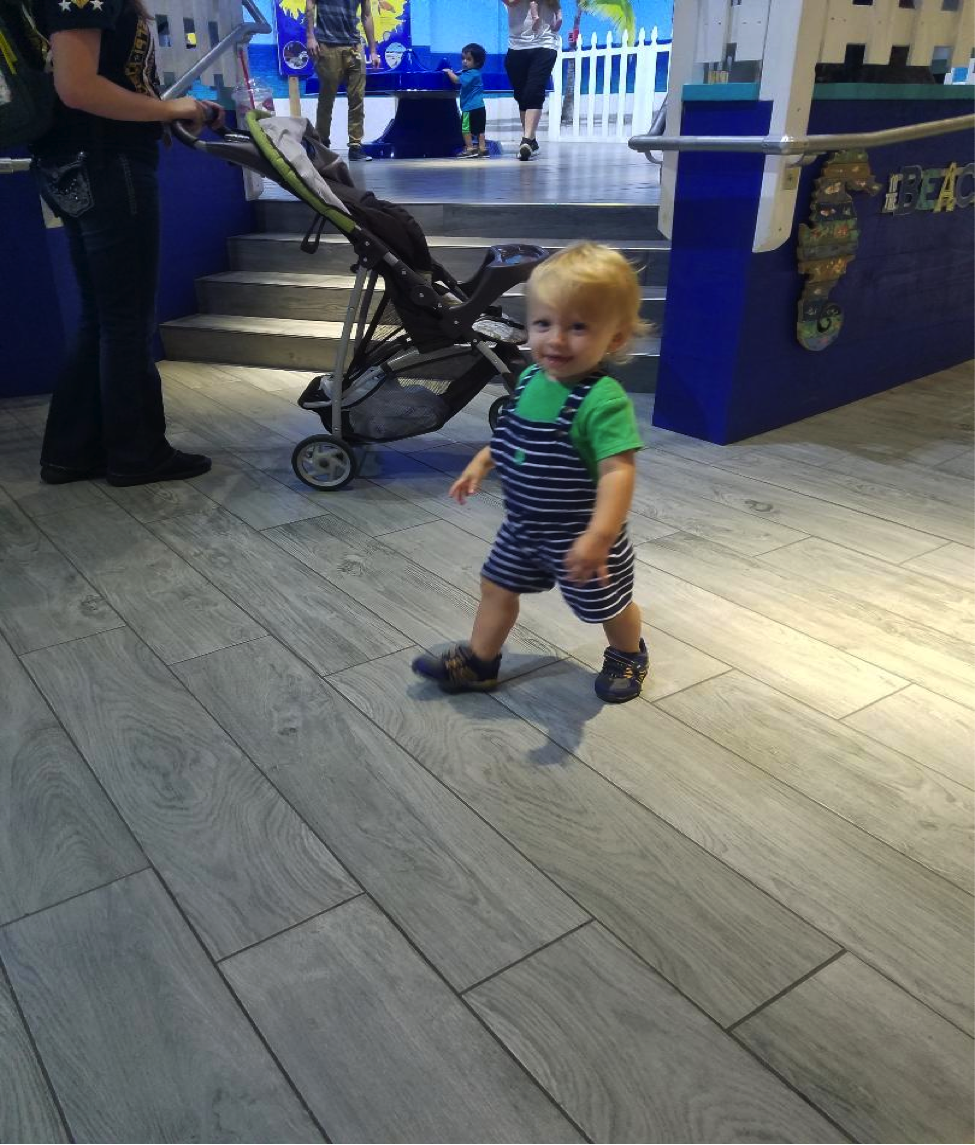 I decided to follow his lead but his 15-month-old feet are faster than my 60-year-old feet!

Because we got there about 11 a.m., a little past snack time (mine and his), we decided our first stop would be to the snack bar. I was happy to see lots of choices, including some reasonably priced and somewhat healthy snacks. As I discussed in a previous blog, Callister is being raised as a vegetarian and although his parents have given me permission to feed him whatever I’m eating, I’m choosing to follow their dietary guidelines. We ordered carrots and celery with ranch dip and hummus with pretzel chips, not lunch but enough fuel for a few hours of aquarium visiting. Although we chose inside seating to avoid the heat, there is also a nice option for outside seating at picnic-style tables. 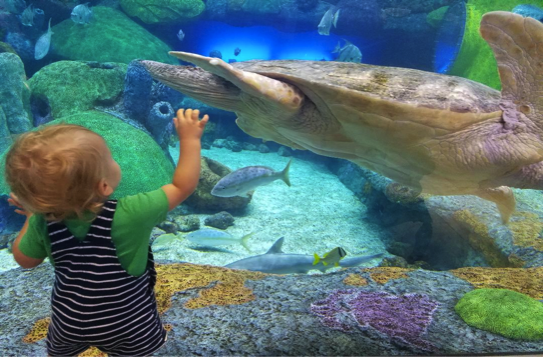 Sea Turtle Island is one of our favorite exhibits!

With happy tummies we proceeded to the exhibits, bypassing the gift shop because I have no willpower to not buy my grandchild anything and everything. Fortunately, he didn’t notice the enticing colorful displays and headed straight to the exhibits, and I made the decision to follow wherever his 15-month-old feet took us. With minimal crowds I felt very safe and comfortable allowing him to roam a few feet in front of me, and he was thrilled to have that little bit of freedom to explore, yet with the security of grandmom close by. The aquarium is a big space, 72,000 square feet divided into regions such as South Pacific Reef, Aquatic Oklahoma and Ozark Stream. Callister’s absolute favorite area was the Sea Turtle Island, and I agreed with him. With a huge wall of windows, we were as close to the sea life as possible without being wet! The sea turtle had him transfixed for a long period of time as the turtle swam close to the window over and over. In the same area, up a ramp, is the observation station. It’s like climbing into a submarine and having a closeup look at the sea life, and when my athletic, agile husband is with us, he climbs right in there with Callister. I have a bit of claustrophobia (ok, a lot) so fortunately my grandson climbed right in independently while I sat on the bench and watched him. He must have climbed in and out twenty times, and since there was no one else nearby, I let him have his fun while I took my much needed “grandmom break”. We spent almost an hour in the Sea Turtle area before moving on. He bypassed the Aquatic Oklahoma section to head straight for the sharks! A boy after my heart, the shark area is one of my favorites! My hobby is open water swimming so I should be scared of sharks, but I seem to have some weird fascination with them.  Whoever designed the aquarium must have been a grandparent because once again there is a conveniently placed bench right in front of the full-length glass wall so I could sit while Callister stood and watched the graceful swim of the sharks. This area is a prime spot for great photos, including a shark cage kids can climb in to imagine what it’s like to swim with the sharks. There is also a tunnel so you can walk surrounded by sharks on both sides above your head. 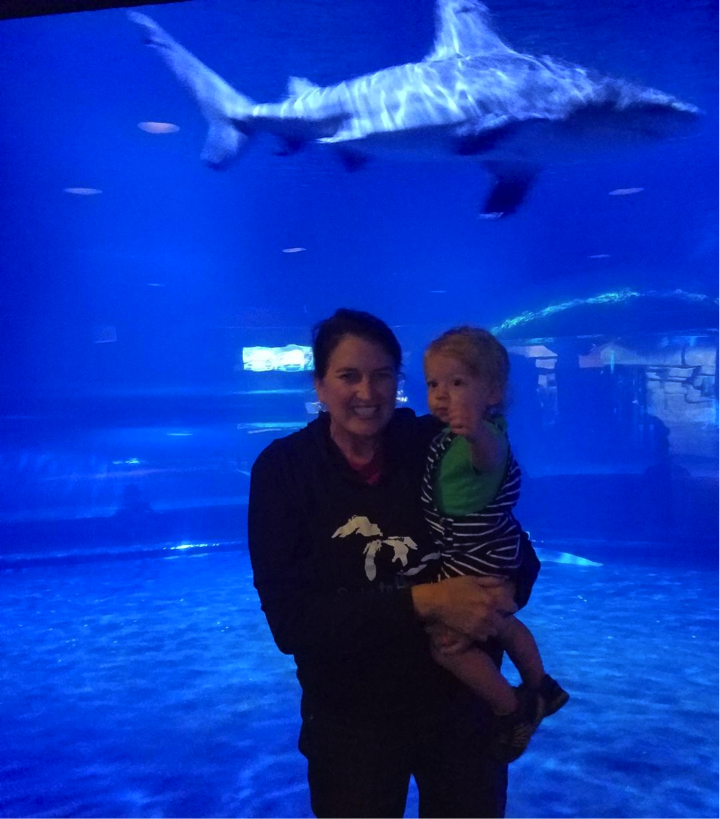 He also enjoyed feeding the turtles. For two dollars your child or grandchild is given a small fishing pole-like device with a clothespin at the end to hold carrot shavings. In the interest of the turtles’ well-being I helped Callister hold the carrots close to the turtles without bopping them on their poor heads. You can also feed the Stingrays shrimp for three dollars, but the turtles are more enthusiastic and energetic, just make sure to keep hands out of the water. 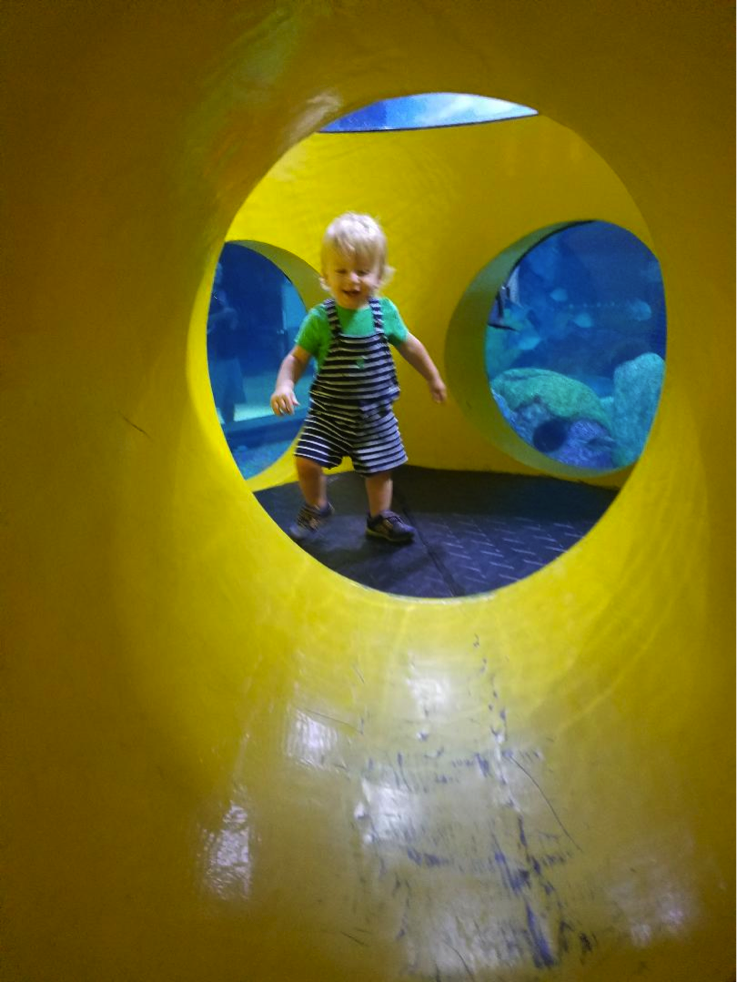 If you’re not claustrophobic you can have a great view of Sea Turtle Island from the observation station!

The forecasters are predicting a long winter, so I decided to buy a yearly pass for the Oklahoma Aquarium. It’s a great place to get your grandkids out to exercise and learn while not totally wearing yourself out. The aquarium has a wide range of age appeal, I can’t imagine any age that wouldn’t enjoy it, and with the new Polynesian Reef exhibit opening this weekend, there will be even more to love! I have a feeling Callister and I will be making frequent visits, so if you see us, a blonde, smiley little dynamo with a slightly tired-looking grandmother in tow, give us a shout out! I’d love to know what are your favorite places in the Tulsa area to take your grandkids?

Hours- The Aquarium is open 10-6 every day except for Christmas, last admission is sold one hour prior to closing

Costs- The cost for adults is 15.95 per ticket, senior adults (62 and over) and military are 13.95, children 3-12 are 11.95 and kids 2 and under are free! There are some good deals on memberships if you plan to visit often, check here for the prices. If you can prove you are a Jenks resident you get half off those prices! 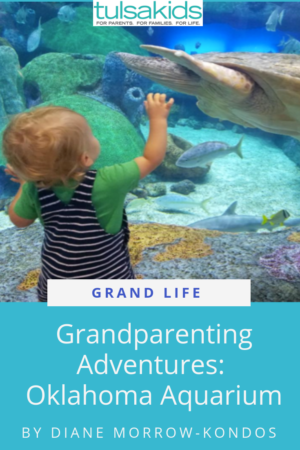