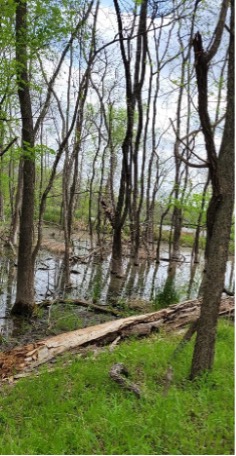 The title is a little misleading as this was not my first field trip ever. I went on dozens of field trips when my children were growing up. They attended a private school that seemed very keen on field trips, so dozens may even be an underestimation, but you get the point. As a mother, I was a well-seasoned field trip chaperone. My kids are in their mid-thirties, so you can figure out that it’s been a minute since those days. However, this past Friday was my first field trip as a grandmother.

My daughter had to work on the day Callister’s K-4 class scheduled an excursion to Oxley Nature Center, so she asked me to step into her place. I wish I could say I immediately and enthusiastically jumped at the chance, but I don’t like to lie. I hesitated. I hesitated not because of any lack of desire to spend time with my grandson. I hesitated because I was rusty at my field trip skills, and I had insecurities and concerns. My fitness level has fallen off drastically in the last few years. Would I be able to keep up on the hike, or would I hold the group back? Then I thought about the fact I would be supervising other people’s kids. Although I’m a retired teacher, it’s been more than a few years since I had to practice any supervisory skills with any kids except my grandkids. Then I worried about the overall energy level I would need for a three-hour interaction with four and five-year-olds. Since retiring, I’ve become a little too accustomed to moving at a slower pace with many breaks and even occasional naps. Honest translation – I’ve become lazy.

He reluctantly agreed to a photo. The compromise was making a silly face.

I expected my grandson to be happy when I told him I was going on his class’s field trip. He and I are buddies, and I was sure he was a fan of mine as I am of him. I did not get the response I expected. The ungrateful little kid crossed his arms, stuck out his lower lip, and said, “I wanted Granddad to go with me!” Ouch! I should be used to this, my husband is everyone’s favorite, and I’m always the runner-up. Since my husband had to work, Callister was stuck with me.

I tossed and turned in bed the night before, worrying about my first field trip as a grandmother. Thankfully all my worries were unnecessary. As I was driving into Oxley, I spotted two deer and took that as a good omen. The adult-to-child ratio was impressive. My grandson and his best friend were assigned to his friend’s dad and me, so my task was easy. There was a bathroom in the Oxley Nature Center, so another fear was alleviated, and after a quick stop there, we began the hike.

There are nine miles of beautiful hiking trails at Oxley, and mercifully, they’re mostly flat! We walked through woods surrounded by trees and marshes. We paused at a pond’s edge to watch turtles and a snake swimming. We looked at the trees where it was apparent beavers had been working, and we climbed an observation tower. There were birds everywhere, and if I’d had binoculars, I would have actually seen them rather than trusting the people with younger eyes to tell me about them. It has been documented that there are two hundred and sixty-three species of birds at Oxley! If you haven’t hiked at Oxley, I urge you to go! I don’t know how long our hike was, but by the last quarter mile, the kids were giving out and starting to complain about being tired and hungry. I didn’t want to admit it, but I was also quite happy to see the trail’s end.

Checking out what we might see along the trail.

After another bathroom break, we went to a picnic area that was shady and beautiful. When I pulled out my surprise stash of bacon for my grandson, he was happy I was the one that came on the field trip. Yeah, I sometimes resort to bribery to gain the affection of my grandkids. I’m not above that. Lunchtime was surprisingly quiet for a group of Pre-K kids as they hungrily devoured their lunches. I was impressed that they all cleaned up their areas and took the trash to the receptacle. It was fun to watch the kids run, throw leaves around, chase each other, and look for worms in the dirt. Some of the joys of childhood never change.

Callister was excited that I brought bacon for his lunch!

I watched the Pre-K kids climb the steps to the school bus, waved goodbye to my grandson, and then headed to the peace of my car. I loved going on my first field trip as a grandmother, and next time the sign-up sheet goes around, I won’t be as hesitant to volunteer. I may be a senior citizen, but I can still keep up with those little ones for three hours. We don’t need to mention the nap I took as soon as I got home. 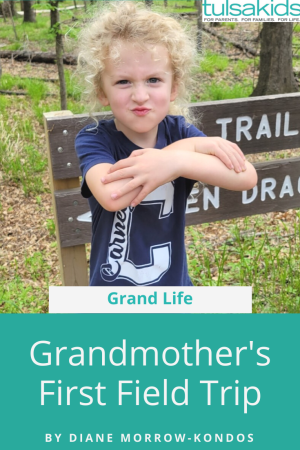