In the age of iPads, Android, Hulu, and all the other technological timewasters we have available to glue our eye sockets to these days, it’s refreshing when a family can sit down to play a good board game and still have a good time. What constitutes a good board game is, of course, highly subjective. Most know the classics like Monopoly and Clue, either of which make for an evening of fine entertainment, but if you want to venture out into more unknown board game territory, it’s all too easy to spend way too much time figuring out how to set  up and play something that ends up being a real dud. 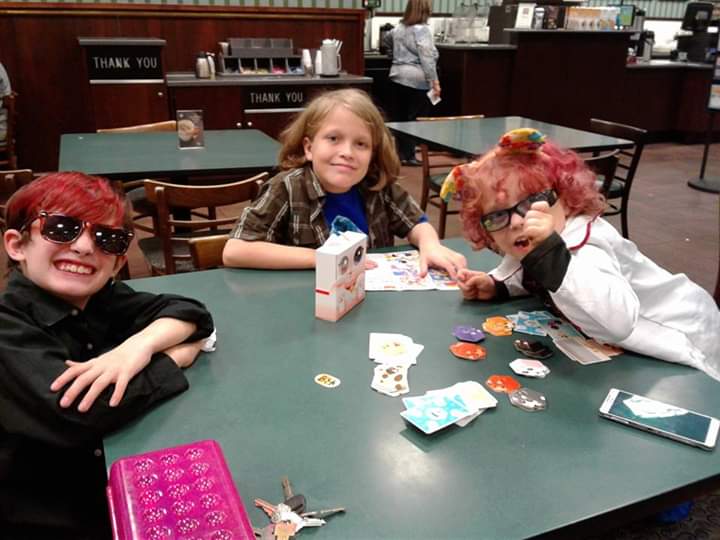 My first experience with a cooperative board game was a couple of decades ago before we ever had kids. I once picked up a game from a thrift store way too intriguing to pass up, and at a mere six bucks, it seemed imperative to do so. “The X Game” as it was called turned out to be a futile struggle where players worked together to advance their tokens to the end before an autonomous token known as “the system” could advance all the way to the finish, ending the game. Despite several attempts, we never beat the system. Go figure.

Years later, someone gifted us a game of Hoot Owl Hoot!, a cooperative board game with much the same concept but with a decidedly more whimsical theme. Instead of people going up against systems of oppression, players are adorable owl children playing against the sunrise. The game, which features attractive, bold graphics, is young kid-friendly but still fun for older kids and adults. In the game, a little family of owls has to fly home before the sun rises. 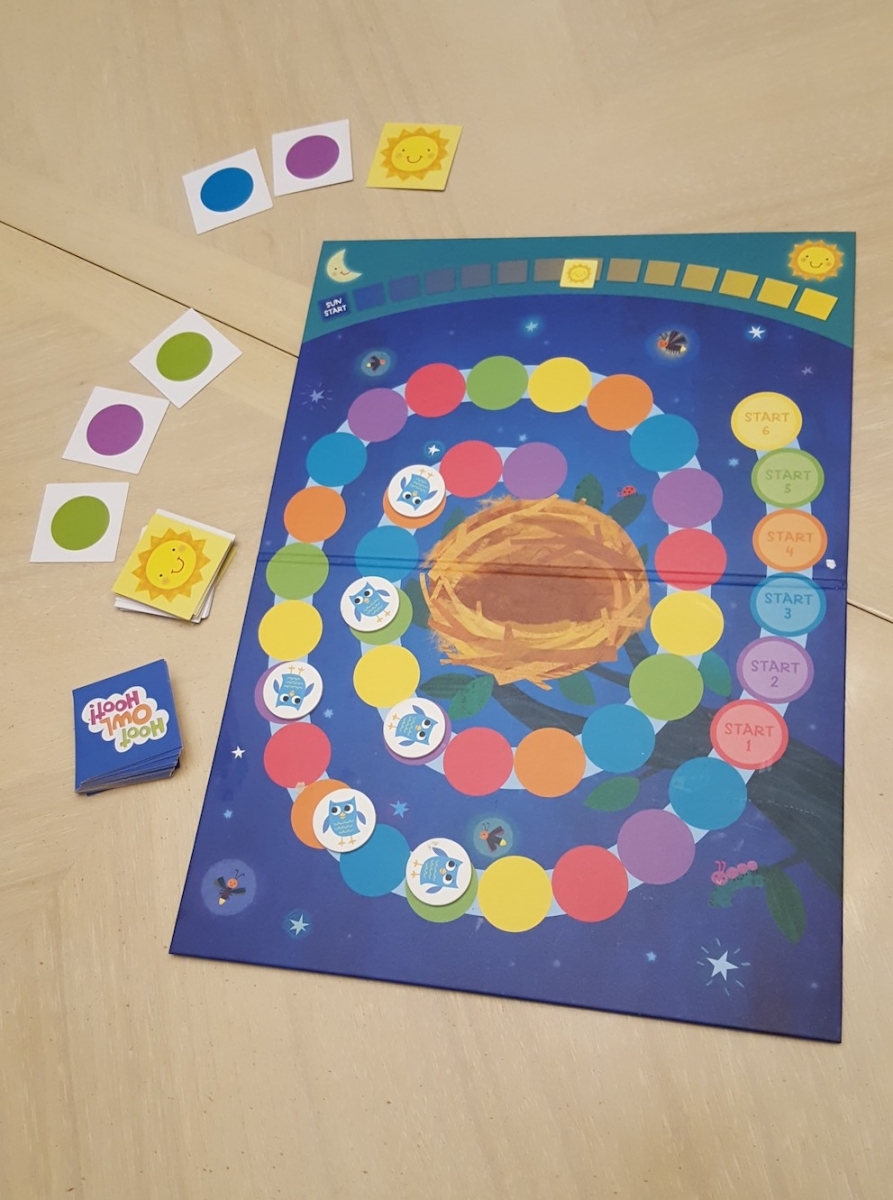 Players move by drawing cards. If they draw a color, they can fly to that color, but players have to be mindful of helping other players get to the nest so it becomes necessary to work together. If players draw a sun card, they have to move the card at the top of the board closer to dawn. What’s great about this is that even the sun and moon are smiling and adorable, which reinforces the idea that just because things didn’t go as you wanted does not make them bad or wrong. In life, things don’t always go as we planned. We don’t have to get mad about it, just work together for a solution. 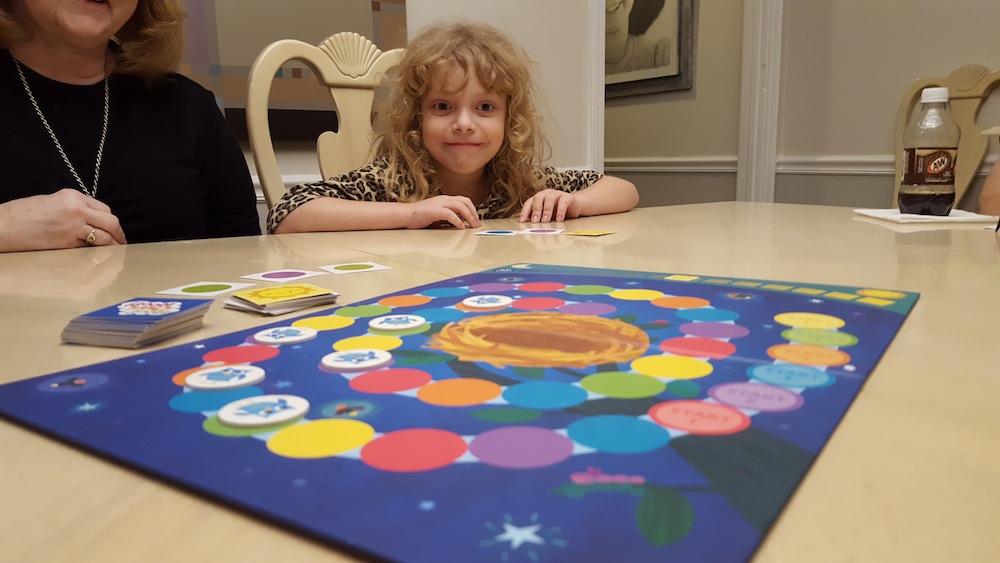 The game is meant for ages four and up, with up to six players per game. It requires no reading, so kids who are old enough to play Candyland can handle this game. But one of the best features of this game is how quickly it can be played. With smaller kids especially, it can be easy to lose kids’ attention long before a game ends. Hoot Owl Hoot! can be played in about 15-20 minutes, at which point you can decide to play another round or throw in the towel.

When Tara asked us to review a game – Gnomes at Night – by the same maker, Peaceable Kingdom, I had the opportunity to try out with the kids on an impromptu most-of-the-family game night.

Like Hoot Owl Hoot! and The X Game, Gnomes at Night from is a cooperative game where the players must work together. The game board sets up with two players or two teams on opposite sides of a game board placed vertically à la old-school Battleship. The players or teams play as a bright blue or red garden gnome with a magnet under its feet. The two gnomes are placed on opposite sides of the board, where the magnets in their feet cause them to stick together. This means where one gnome moves, the other moves as well. 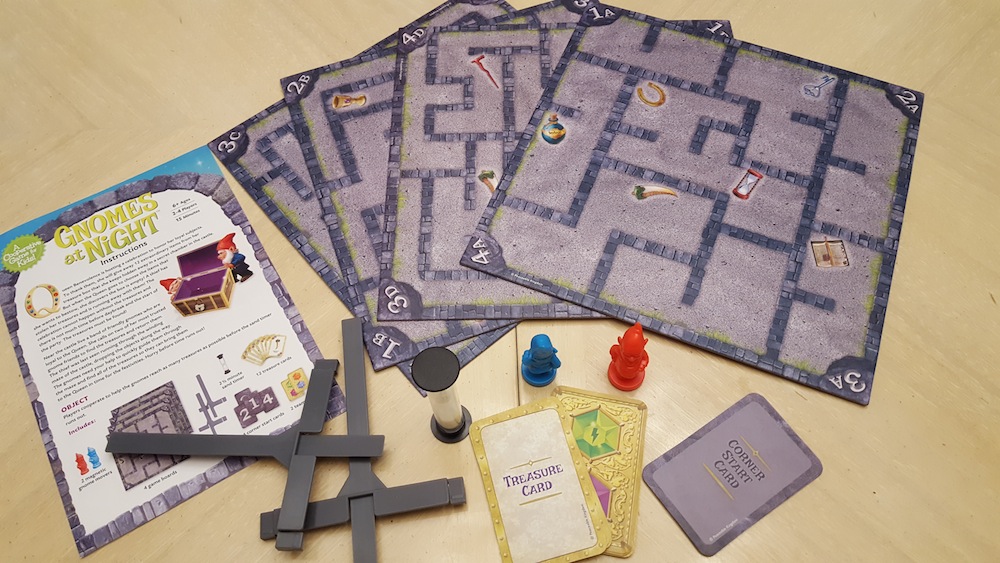 With their gnomes stuck together, each player must move his or her gnome through a sort of labyrinth toward 12 hidden treasures (think gems, potions, and magical keys) with only six on each side of the board. There are four different boards to choose from, and the labyrinth on each side is different from its counterpart.

Which treasure your player moves toward is dictated by cards flipped over from a deck. The players or teams must work together to move their gnome to the selected items. On each side of the board, the gnome may move through the labyrinth but may be obstructed by a wall in the path, leaving no way to get the item. This is where cooperation comes in. A player will need to vocally guide the other player which way to go as their gnomes may not have a wall in the way and can advance both gnomes toward winning another point. 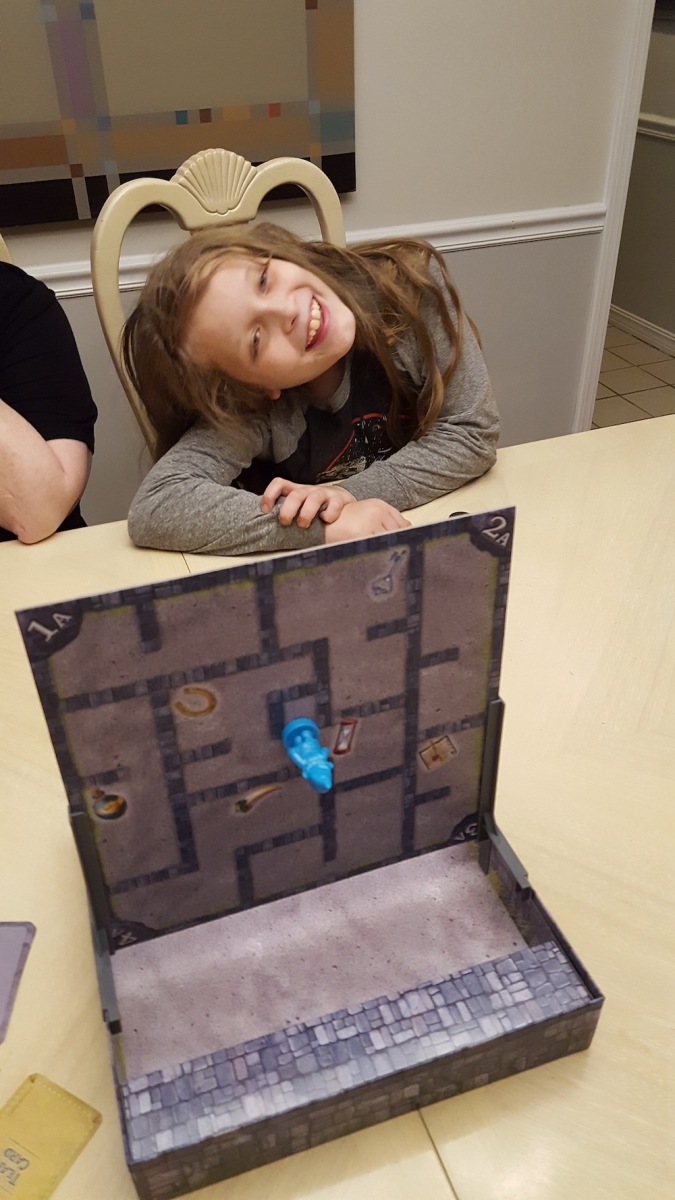 Sound confusing? That’s probably because it is. However, Gnomes at Night does not take long to get used to and become a fun challenge. At least that’s my perception as an adult playing the game. Although I’ve done my best to explain gameplay, a simple overview really would not suffice and adds to the level of how confusing and difficult this game really is.

Is it fun? Yes. Is it fun for kids and adults? Yes. Would it be fun for kids only? I’m not so sure. I think the specific ways in which you must move and work together could cause a lot of frustration without adults around to keep it on track. Although the game is rated for ages six and up, it is far more complex than Hoot Owl Hoot! and is a much more complex game. Like Hoot Owl Hoot!, a game is rated to take about 15 minutes, and if you were playing it with all older kids who did not require a lot of guidance, that might be the case. However, if your kids are under 12, you might end up doing a lot of situation management that can inflate the game time.

Both Gnomes at Night and Hoot Owl Hoot are great for a family night, and the concept of a cooperative game offers a fresh experience and new types of problem-solving. It also reinforces the idea that a family has each others’ backs. Peaceable Kingdom specializes in cooperative games, and their collection is fairly varied. They offer a wide range of games for younger kids in the 4 to 8-year-old range, but there are a few more complicated games like Cauldron Quest and Mole Rats in Space. One of the best things about these games is their clever premises.

Do you have a favorite family game? Have you ever tried a cooperative game before? Give our family your recommendations in the comments, and thanks for checking out my first post!

[Editor’s Note: Gnomes at Night received an ASTRA (American Specialty Toy Retailing Association) award for Game Play Under 7. TulsaKids was given a copy in exchange for a review.]