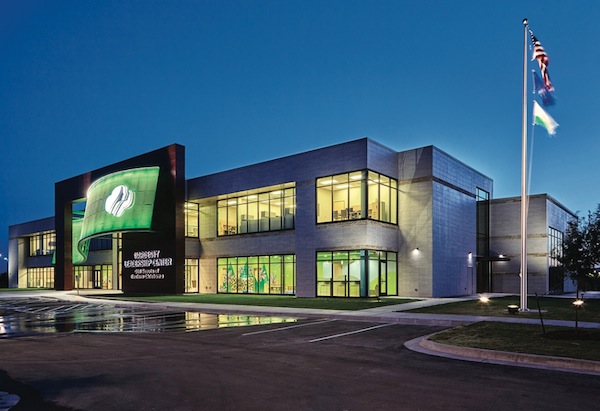 “I’ve not seen one Girl Scout office with the design detail of this one,” said Roberta Preston, Girl Scouts of Eastern Oklahoma CEO. “I’ve been to half a dozen to 10 around the country, and none of them are as beautiful as this. We waited for the right time and held on to the land for 10 years so that we knew we had the support of the philanthropic community. We were very fortunate with the timing and did all of our pledges before the oil prices dropped. I think that made a difference.”

Built by Flintco and concepted by Beck Design, the building illustrates the Girl Scouts theme throughout the facility. Beck Design met with each department to determine the needs for each area.

“Beck Design really delved into the Girl Scouts’ story and history, and as a result, their concept really incorporated all of the Girl Scouts elements – the green sash on the front of the building, the wavy line that goes from the front of the building to the outdoors, the outdoor fire pit and even a bridge above the first floor that reflects the transition of the girls from one level to the next,” said Susan Kenny, chief development officer. “All of the colors throughout the building are based on colors of our cookie boxes – they are seen all throughout the building in the flooring, paint colors and upholstery. This is another example of how the Girl Scouts component was incorporated into the building.”

The first floor was designed for girls and volunteers, with a separate wing for each.  The first floor also includes a catering kitchen, meeting rooms, store, museum, warehouse space and in-house print shop.  Several of the rooms even double as safe rooms with FEMA doors.

Twice the size of the old store, the new Girl Scouts store is a cheery space near the lobby with its own entrance that can be accessed on weekends if the building is closed. “The store is bright with lots of light and stocked with everything you need depending on what level, from Daisy to Cadette,” Kenny said.

The Girl Scouts’ former building at 51st and Lewis was almost 50 years old, and space was tight. “It was designed for a staff serving 3,000 people. Now we’re serving almost 13,000 people,” Kenny said.

The new space was designed to allow the organization to offer multiple activities at the same time. “We now have so much more space to have so much more going on over the course of a weekend or in the evenings than we were ever able to have before,” Kenny said.

The new building even features a small Girl Scouts museum that will showcase vintage uniforms, interactive exhibits and more. “We partnered with the University of Tulsa Museum Program to develop the museum. Working with TU really helped us by having someone with expertise,” Kenny said.

A climate-controlled warehouse space is another key part of the new facility, which is where the cookies are stored.  The old building storage space consisted of a basement that was a fraction of the new storage space. “The old building had a sloped driveway and the cookie truck couldn’t even make it down the driveway, so staff had to help unload the truck,” Kenny said.

The building’s second floor provides office space for their 50 employees, including a staff kitchen and employee break area. The new space contributes to how the staff can better serve the volunteers and the girls. “Having more space has really made an impact for our employees,” Kenny said. “What a difference having a new building makes!”

The building was financed through a capital campaign that began in 2013, and the campaign is nearing its end.  “Our goal was to fund the building completely through philanthropy, and we are currently in a closing the gap campaign,” Kenny said. “The campaign has been funded through the generosity of our family foundations and corporations.”

“I think this building really invites kids. It’s warm, and it welcomes children,” said Lauren Zeligson, communications director. “In the other building, there just wasn’t enough space for kids to come, except to visit the store. This new building is kidcentric.”

The Girl Scouts of Eastern Oklahoma serves 30 counties, with almost 11,000 girls and 2,500 volunteers. One of their special programs includes Girl Scouts Beyond Bars, a national initiative to strengthen parent-child relationships for girls with incarcerated parents.  “Our goal is to reach every girl where she is,” Kenny said.