Gingerbread, Both Edible and Not

Inspired by Joss's school's Holiday Market, we tried making some Gingerbread Playdough. Of course, we had to make some real gingerbread, too!

Every year, Joss’s school has a Holiday Market, where parents have the opportunity to buy craft items that the kids have made. This year, Joss’s class made some beautiful ornaments using beads they had shaped and painted themselves, painted note cards, nature collages, vases filled with beaded or painted sticks, and more. 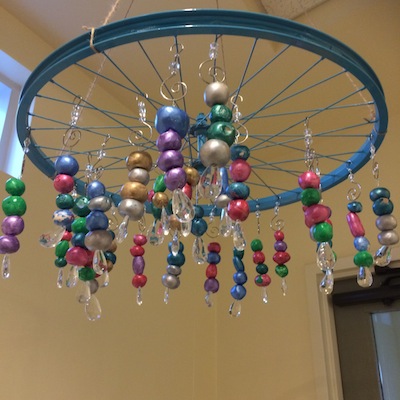 I’d love this entire display in my house! 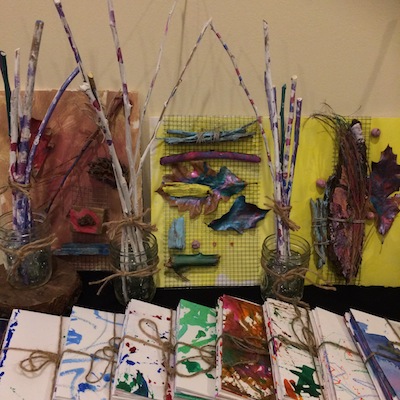 It is hard not to spend an entire paycheck at the market, especially because the other classes come up with so many interesting things, too, including hand-made lotion, rosemary-scented bath salts and Kool-Aid lip gloss (which is at the top of my things-to-make-someday list). So instead of buying one of everything, which I couldn’t afford, I purchased primarily from Joss’s classroom and then took note of future craft ideas.

One of my favorite things at this year’s market was the Gingerbread Playdough–spiced, homemade playdough that was packaged in mason jars topped with a circle of plaid fabric and a gingerbread cookie cutter. While I didn’t plan ahead enough to duplicate the festive packaging, I did look up a recipe for Gingerbread Playdough that proved very simple to make. (Although there are many similar recipes out there, the recipe I used was from www.sweetsugarbelle.com, mainly because it reminded me of Sweetie Belle from My Little Pony.)

The original post says, “[This gingerbread playdough is] a beautiful brown color and has a rich enticing aroma, just like real gingerbread. It looks almost like the real thing, minus one thing…taste. You won’t have to worry about your kids eating this dough. Although it smells good, it tastes every bit as yucky as every day play-dough.”

As someone who’s never really minded the taste of playdough (In small doses, of course) I read this statement with a dose of skepticism. And as the mother of a toddler who still loves putting everything in his mouth, even dirt, and then swearing that it tastes “yummy,” I assumed there was a high likelihood that this playdough, which really does smell amazing, would end up in a mouth at some point, and it did. Repeatedly. (Not mine, though.) Regardless, put Gingerbread Playdough on your Snowy Day Activities list, as it is easy to make, fun to play with, and smells delightful. 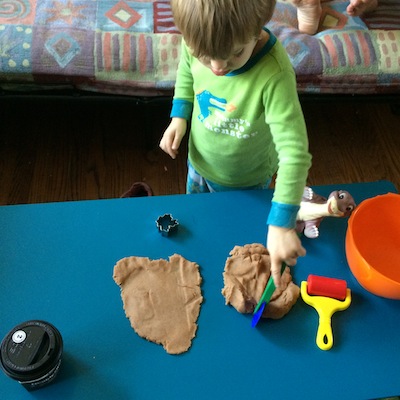 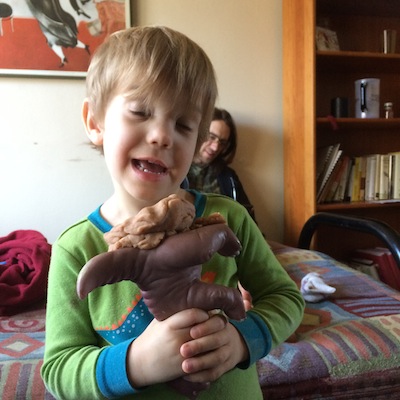 This is a gingerbread dino-cone. Joss just can’t get enough ice cream in his life, even in the winter. 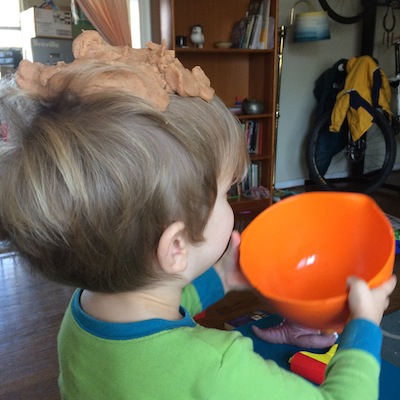 And a playdough hat…oh yeah, this is why I don’t usually keep playdough around the house…

And now to the truly delicious part:

One of my favorite baking books is the Fat Witch Brownies cookbook by Patricia Helding, which I received from my Dad several years ago. The best thing about this book is that all the recipes are really easy–without being boring–and they all fit in a 9×9″ pan. It’s perfect for moms who love baking but don’t have time for anything complicated and who are slightly concerned that they may end up eating the entire pan of brownies themselves. So when Joss asked to make brownies the other day, I grabbed the Fat Witch and decided to make their Gingerbread Bars, on the assumption that he wouldn’t realize until too late that they weren’t technically brownies. 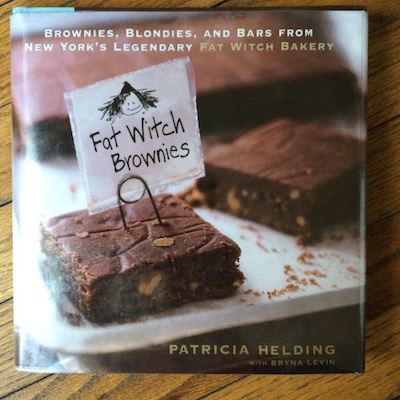 Unfortunately, I didn’t check to see if the gingerbread was done in the middle because taking-them-out-of-the-oven time was conflicting with bed time, and they were still very raw in the middle, meaning I had to cut off the edges and stick the pan back in the oven the following morning! But as long as you test your gingerbread to make sure it’s done, these should turn out delicious.