It’s the gift-giving season, and if toys or children’s items are on your list this year, you might pause before you hit the stores for those last-minute sales. Older kids are pretty good about telling us exactly what they’d like for gifts, and babies love everything. But for our toddler to pre-k tikes, gift buying can sometimes be a challenge, especially for those of us looking to break the mold of gender stereotypes.

There are plenty of reasons to get children gifts that defy gender stereotypes. Maybe you’ve made a conscious decision to raise your kids in a gender-neutral way or your child self-identifies as fluid or nonconforming, or perhaps you’re the cool aunt who wants to help your niece or nephew start a gender revolution in middle school. Maybe you’re like me and simply want to raise kids who don’t feel tied to traditional gender roles.

As a mom of both a girl and a boy, I hear comments all the time about how nice it must be to have one of each. “You must get the best of both worlds,” one friend will say. “A sweet little girl and a rowdy, silly boy.” While my children do have very different personalities, something rubs me the wrong way about suggesting that it’s simply left to their anatomy to decide their behavior. In fact, this idea of gender roles influencing behavior is a big topic of debate. While it’s easy to get sucked into the extremes of each side, experts in the field say that gender stereotypes are real and aren’t the product of the child, but rather their environment.

This environmental impact can be seen front and center in the world of retail. According to whoever arranges toys in the big box stores, boys’ stuff is about sports, action and aggression (think footballs, action figures and light sabers) and girls’ stuff is about appearances, nurturing and quieter play (think baby dolls, dress-up/make-up kits and crafts kits).

According to researchers, science projects and construction toys are more likely to feature pictures of boys on the boxes while kitchen sets picture girls. Doctor kits are still marketed for boys and nursing kits for girls despite the fact that more women than men are graduating from medical schools and nursing has long embraced men into its ranks.

What we choose for our children is something to consider. If we want to let our girls know it’s okay to be strong and even tough and our boys know that it’s all right to be sensitive and to care for babies; if we want to encourage scientific curiosity in our girls and appreciation for the arts in our boys, how do we expose them to all that is possible when toys are packaged and marketed in such gender-specific ways? If we want to give our kids every chance to discover who they are rather than what the marketing departments of manufacturers think they ought to be, how do we offer more choices?

Why is it important to get beyond the idea that certain toys are girly or boyish? Because play matters. Play is the “work” of childhood. The kids are having a good time but they are also rehearsing the roles they will play as adults and integrating the not-so-subtle messages they see and hear into their identity. Research shows that kids who are encouraged to play with gender-neutral toys do better academically, socially, artistically and physically. When toys are limited by gender, it limits a child’s imagination and goals. 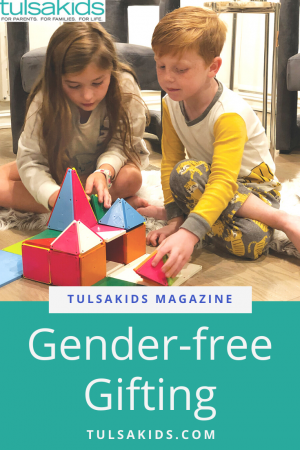 What You Should Know about Pregnancy, Your Baby & Covid