Joss and I review three games for ages 3 and up.

Please note: I was given these fun games for kids in exchange for writing a blog post about them. However, all comments, opinions, etc. are my own!

As I’ve written before, Joss is still in his formative gaming stage. By which I mean, he gets distracted easily and prefers to make up his own “rules,” which change every five seconds. We’ve played a few games for kids: Candy Land (mostly, the gingerbread game pieces just end up moving around to whatever portion of the game board looks the most delicious), The Sneaky Snacky Squirrel Game (very cute…plastic acorns EVERYWHERE!) and I Can Do That!, which has probably been the most successful of our gaming attempts, since it involves movement and silliness.

So when offered the chance to review some games for kids from University Games, it sounded like a fun opportunity to expand our games repertoire and, hopefully, Joss’s skills/understanding. I chose three that I was fairly certain Joss would enjoy, since two of them are based on popular book characters, and the other just sounded fun. Another bonus is that all three of these games can be played with just two players, which was perfect for us.

And, lest you think this was all fun and games (ha!), let me submit the following picture with the caution: If you hand your child three new games at once, and all of them involve cards in some way…and if you also have to work from home on a day your child doesn’t have school, you may end up with the following: 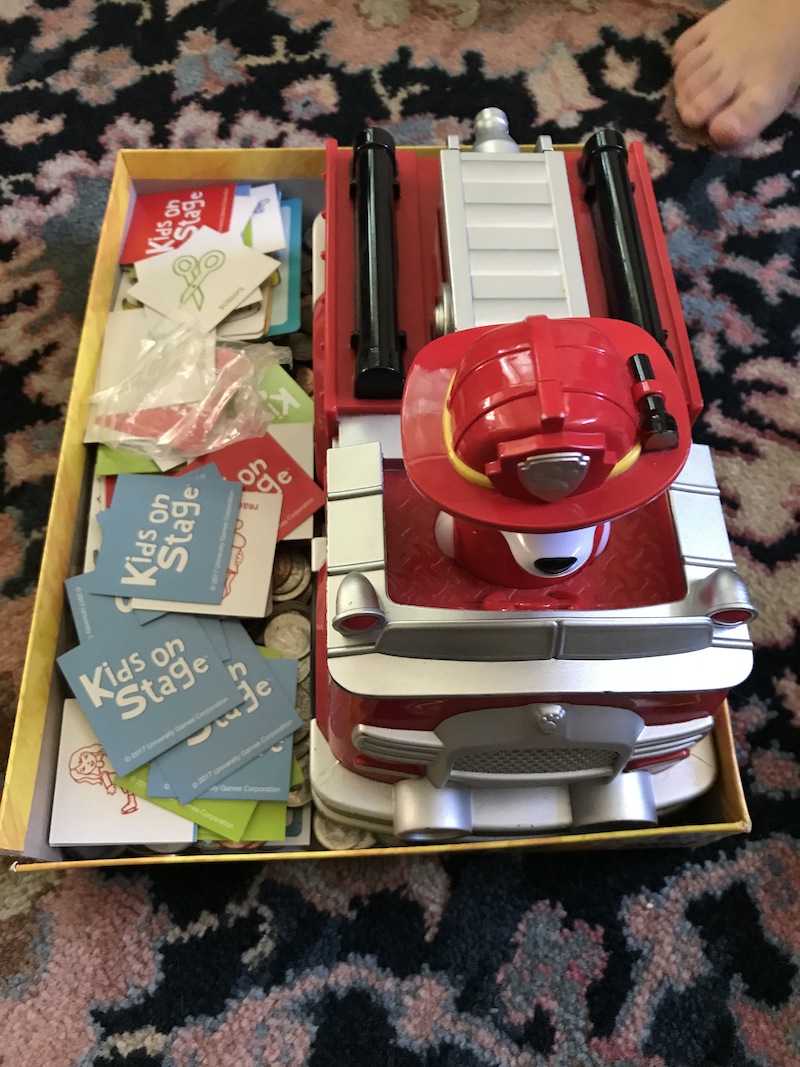 This is cards from all three games, plus money, buttons and a Paw Patrol Fire Truck all mixed together in a kind of horrendous messy soup. *shudder* 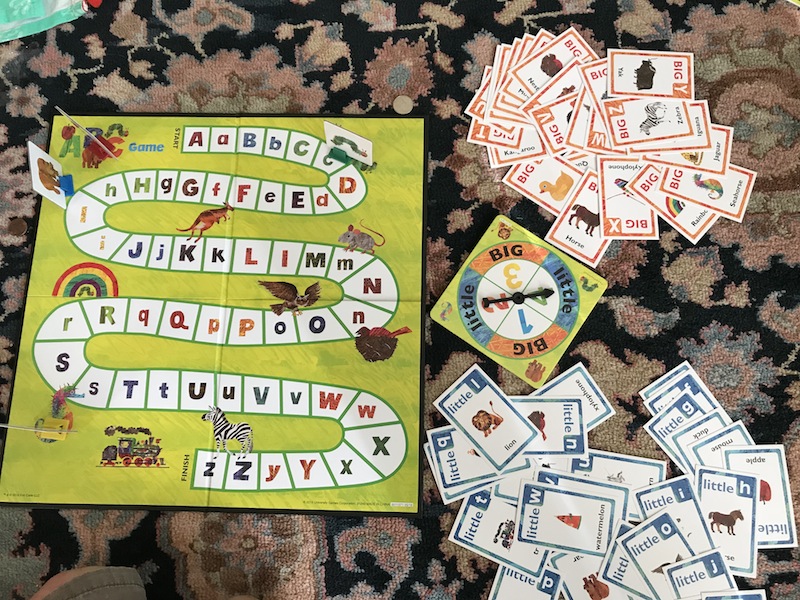 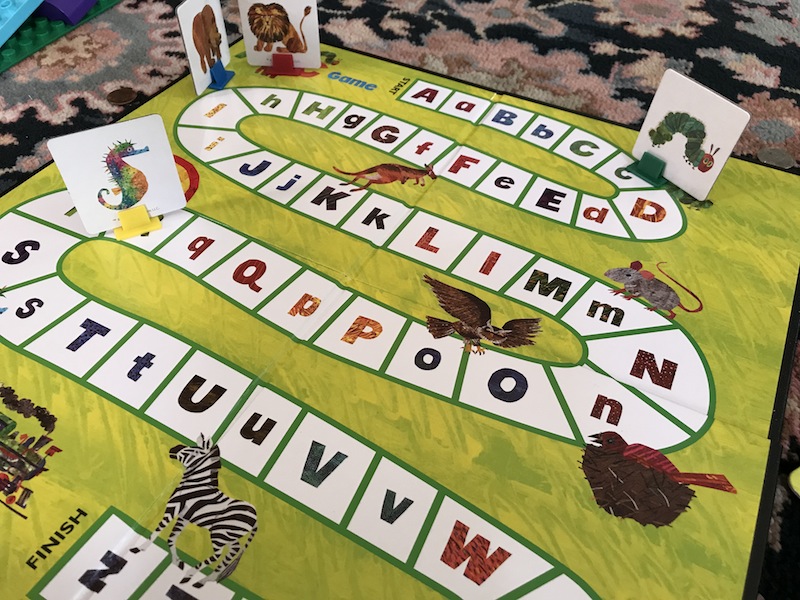 This game is the most educational of the lot, as part of the game play involves recognizing letters of the alphabet, and particularly, big vs. little letters. Of course, because the letters are written on the board as well, it can also be as simple as finding the letter card that matches the square you landed on.

The object of this game is to collect as many letter cards (which are divided into two piles, big letters and little letters) as possible before reaching the finish line. The game doesn’t end until the final person has crossed the line, and whoever has the most cards wins. As you can see in the picture above, the spinner has two rings: the inner circle has the options 1, 2, 3 and 4, and the second has BIG-LITTLE-BIG-LITTLE. This is because every time you spin you have either the option to move your piece the number of spaces indicated (1-4) or to the next big or little letter. Since there is only one big and one little letter card for each letter, once someone has landed on a square and obtained the matching letter, it doesn’t help you to land on that square again. So it’s nice to have a couple options! Plus, it adds a light strategical element to the game.

Joss lasted about five minutes into this game before he got distracted by trying to fit his cards into the box lid like a “puzzle” (see below). So we never made it more than halfway through the game, but he still had fun, so that’s a win! 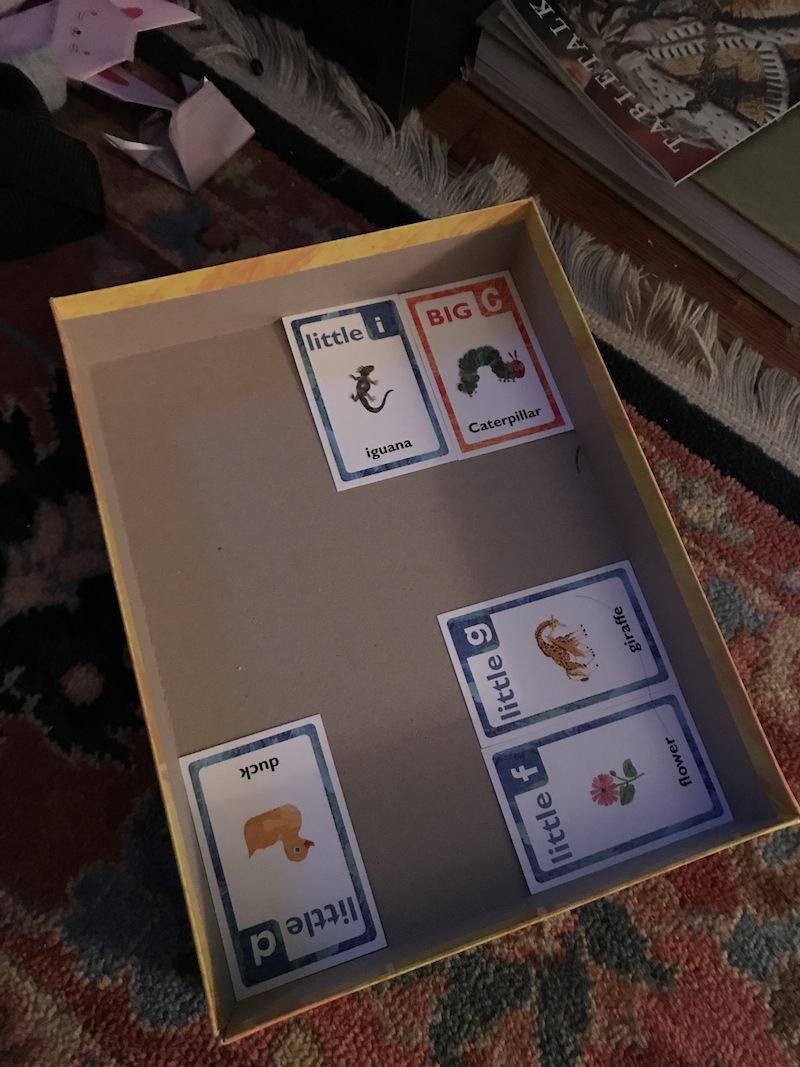 Next, we moved to Pete the Cat Big Lunch Card Game. Of the three games for kids here, this was probably the best suited to Joss’s current skill-level, although I did help him through it. Plus, you get to build a “groovy sandwich” incorporating tasty ingredients like fish, beans and crackers, so it’s got an element of hilarity, too. 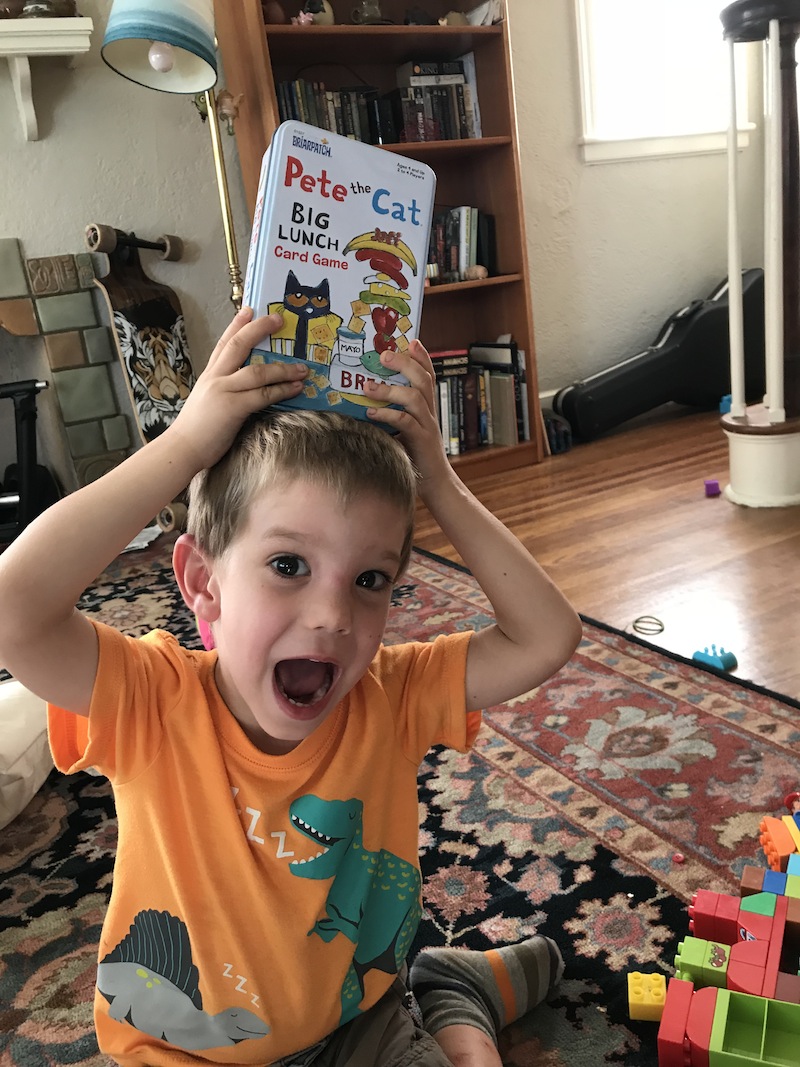 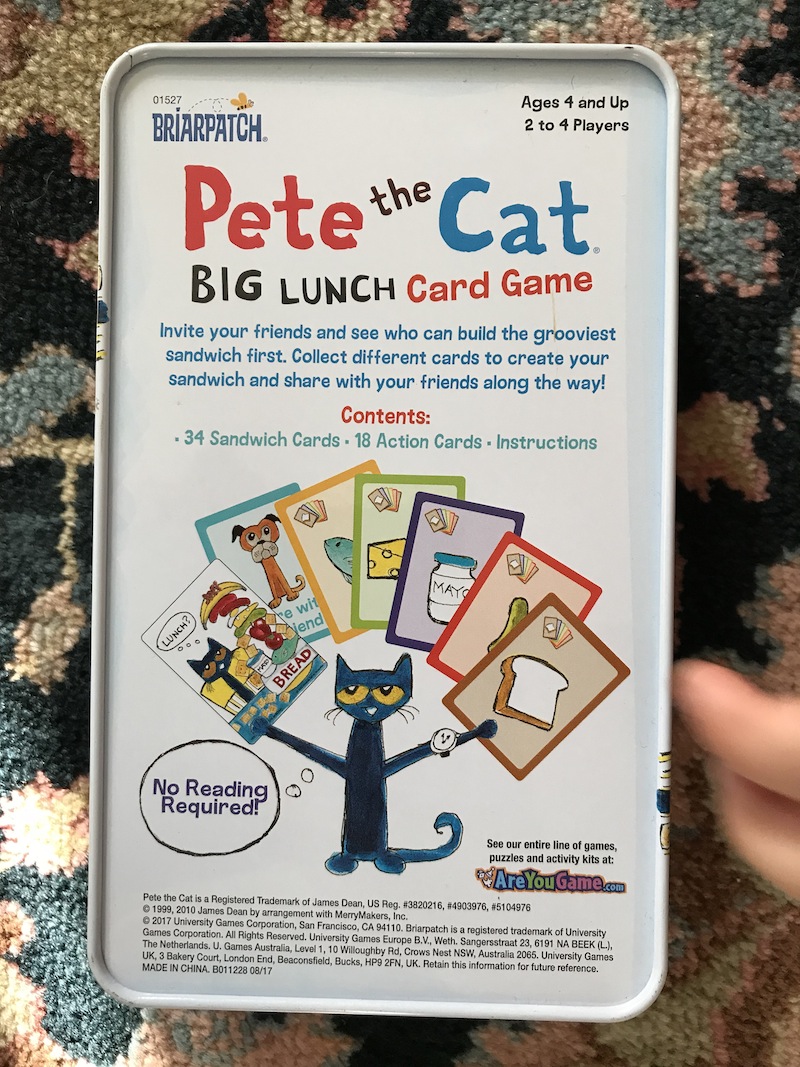 As you can see, the goal of this game is to “build the grooviest sandwich first.” At the beginning of the game, each person is dealt six cards. The sandwich will eventually be made up of two bread slices, a red card, green card, yellow card, and purple card. The red, green, yellow and purple cards all picture different sandwich filling ingredients.

This is a pick-up and discard game, so the remaining cards in the deck are placed in the middle, next to a discard pile. In addition to the “ingredients” cards, there are also three types of action cards: skip, share with a friend, and share with everybody.

I love that sharing is incorporated into the game play. Obviously, you still want to win, and you can skip someone else’s turn, but it’s also about sharing your cards with a friend to help them build their sandwich faster. For example, if you have two purple cards and discard a “share with a friend” card, you can then trade your purple card to a friend who needs it, in exchange for something they don’t need. Sweet! 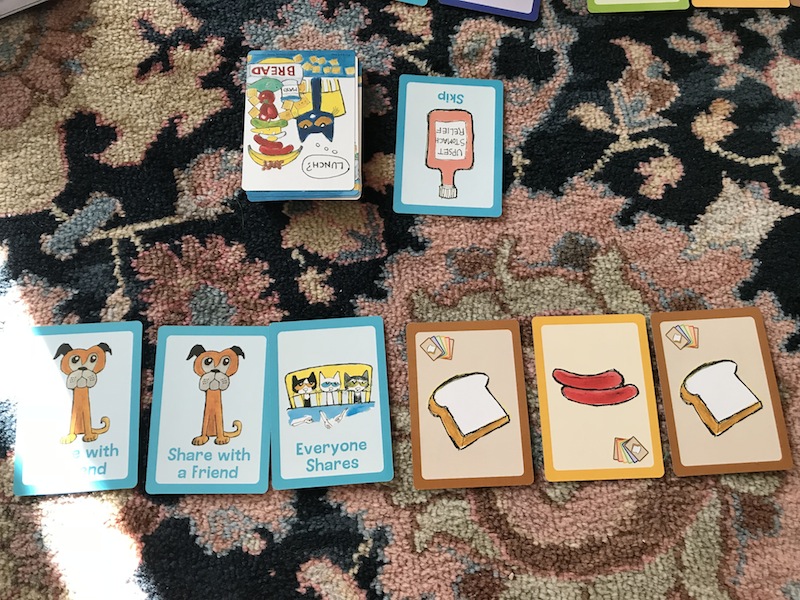 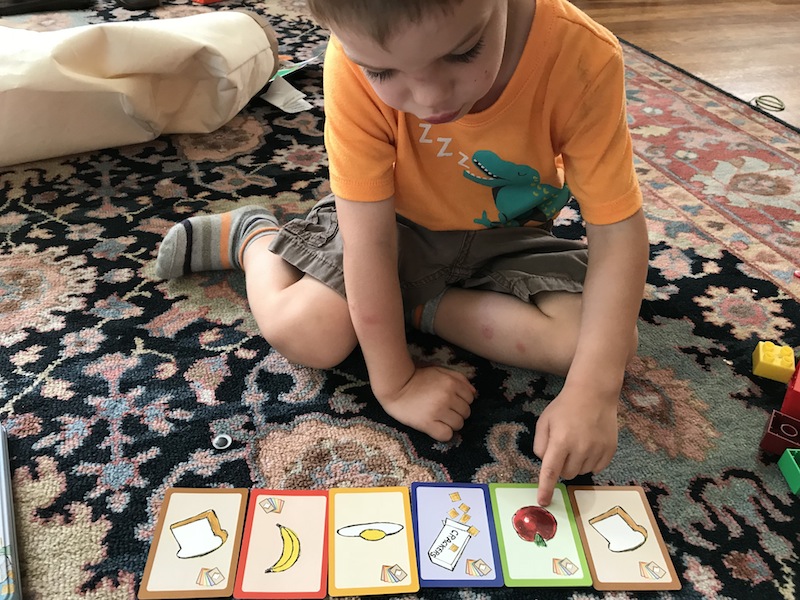 To the right: Joss’s finished banana-egg-cracker-and-tomato sandwich. He won almost every time! 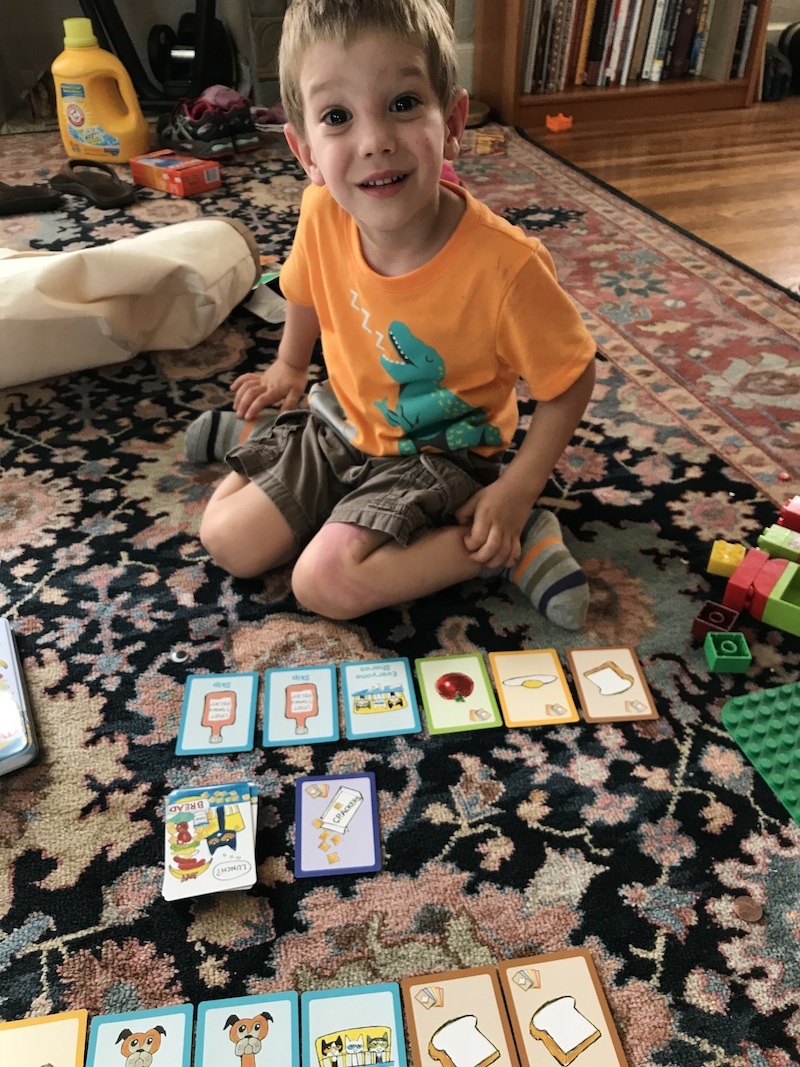 Our final game was Kids on Stage, a variation of Charades that incorporates a game board and three sets of colored cards: green for objects, blue for animals, and red for actions. I know people have been playing Charades for years without these additional elements, but it is kind of nice to let the cards choose for you rather than having to come up with an idea yourself; plus, it is probably helpful for younger children. Joss can pick up most of the cards and recognize the picture, which I think would be easier for him at this age than trying to come up with something to act out on his own. 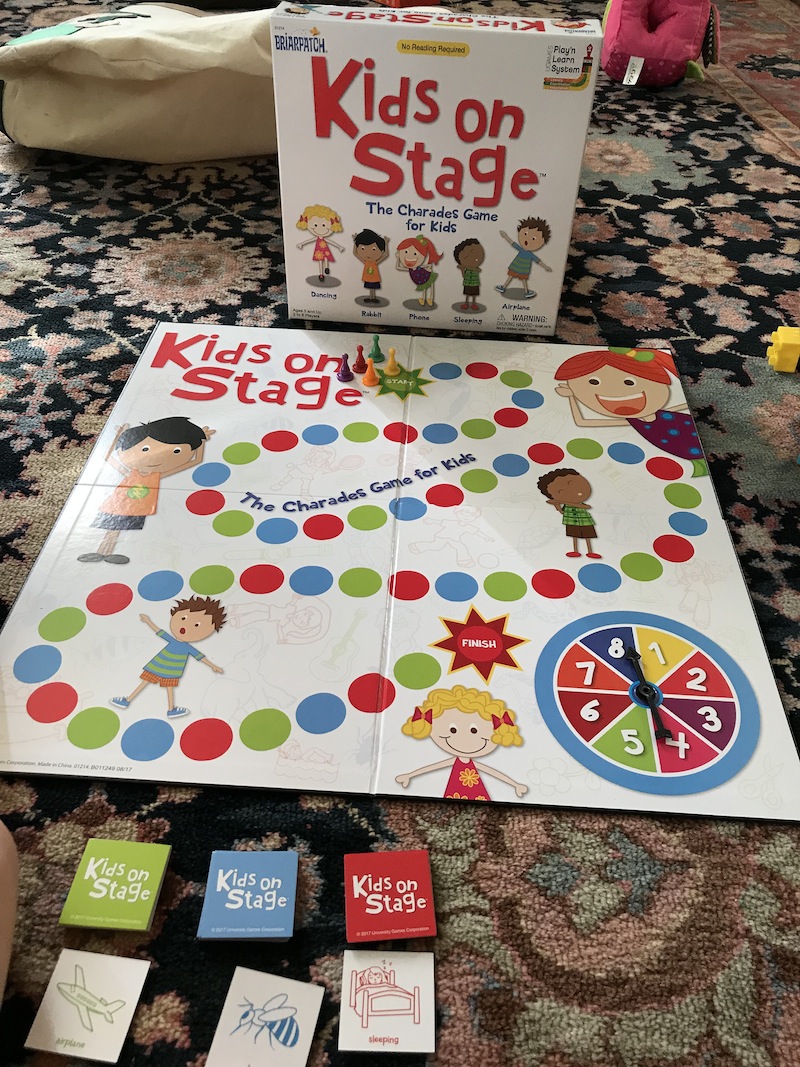 The spinner is used to see how many spaces you move, and then whether you land on a green, blue or red space determines which pile of cards you draw from. I think the person who wins is whoever gets to the finish line first, but the instructions say that you are supposed to keep acting until someone guesses the correct answer. So, if you’re of a more competitive mindset, you might want to add some kind of time element–for example, if no one guesses the correct answer in two minutes, you get to move an extra space or something. 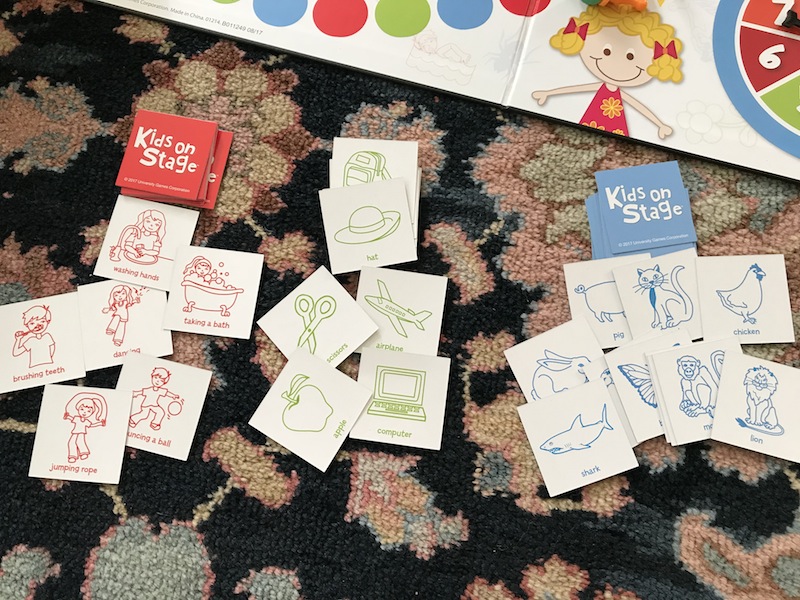 Some of the items on the cards would have been over Joss’s head (I could have acted out “skating” for hours, and I doubt he would have come up with an answer…but you never know! He does enjoy watching “Trolls”), while others were just right for his age. He got my “penguin” interpretation right away, and then wanted to follow it up with his own. So it is definitely a fun way to encourage your kids to “act out” in the best way possible 😉 To be honest, we’ve mostly ended up just choosing cards and acting them out, ignoring the board/spinner altogether.

Which of these games appeals to you the most? What are some of your other favorite games for kids ages 3 and up? I’d love to hear! 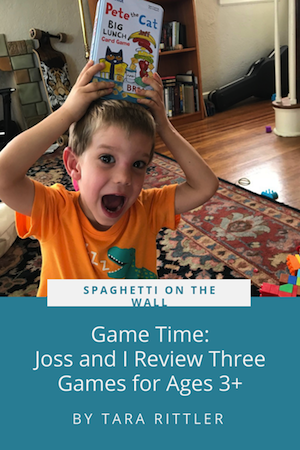