Sometimes when your child wakes up early, Netflix is necessary.

As I mentioned in my first Spaghetti on the Wall post, I’m more of a “wing-it” type of person than a researcher, and every now and then I am forced to recognize that this approach has its limitations. For example, Joss has recently been going to sleep at 7:30 p.m. and waking up at (the horror!) 5:30 a.m. “Why?!?” I ask myself, when awake enough for conscious thought. “What has gone wrong?? And where’s the coffee??”

It turns out, 7:30 p.m. may be early for two-year-olds to go to sleep, at least ones who still nap regularly, as Joss does. When I Googled “How many hours do toddlers sleep at night?” (the extent of my research capabilities, aside from asking more knowledgeable friends), the answer I found was that they sleep an average of 10 hours a night. In other words, there is nothing unusual about Joss waking up at 5:30 a.m. if I put him down at 7:30 p.m. So his bedtime is now 8:30 p.m., something we are still adjusting to, but I have high hopes that longer sleep will be in my future soon!

But this is not a post about toddler sleep issues. It is a post in praise of four kids’ shows that make those wee hours of the morning tolerable–in the sense that, when I turn on Netflix and curl up on the couch trying to sleep while Joss does whatever he does before 6 a.m., the music and voices of these shows not only do not grate on my nerves, they are downright pleasant.

Sarah and Duck search for the Christmas Sea Cow

“Sarah and Duck,” which tells of the adventures of a young girl, Sarah, and her best friend/roommate, Duck, was Joss’s first favorite show, and we have watched it several thousand times in the past year. He even had a Sarah and Duck-themed birthday party–which I highly recommend, as it is very simple. Just serve lemonade, a round cake with chocolate icing and a face (see below), and decorate with sea cow and donkey figurines. 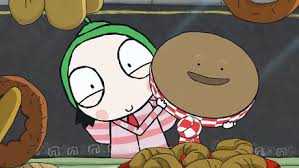 “Sarah and Duck” is a BBC show and is much slower-paced than many American shows, I think, which makes it the perfect early-morning option. (Although it is equally enjoyable any time of day.) The music and accents are both soothing, and I think the most stressful thing that happens in the series is when Plate Girl temporarily loses her favorite plate when she unknowingly sets it down on Tortoise during a fog, and he walks off with it.

My favorite episodes involve the town library, which is magical. The books about aquatic things float in fish tanks, the books in the “Getting Dressed Department” are housed in a giant armoire, books about marshmallows can be found in the “Pink, White, and Squishy” section…if I am ever granted three wishes, one of them may be to visit Sarah and Duck’s library.

It’s always “a beautiful day on Puffin Rock,” where pufflings Oona and Baba explore their small island with their friends, including Mossy the pygmy shrew, May the rabbit, Silky the seal and Bernie the wise old hermit crab. Puffin Rock is an Irish show narrated by Chris O’Dowd, whom I first learned about thanks to “The IT Crowd,” which is not a kids’ show but is hilarious.

Like “Sarah and Duck,” “Puffin Rock” is full of lovely music (and scenery!), tales of friendship, humor–and even educational tidbits! For example, did you know that pygmy shrews have to eat nearly constantly and have stink glands that come in very handy when it comes to scaring away grumpy foxes?

“Mouk” is a French show that follows Mouk and his friend Chavapa on their bicycling adventures around the world. Mouk and Chavapa make many friends as they enjoy experiencing different cultures. Although Chavapa is sometimes a little reluctant to try new things–like skiing–they are good role models for being kind, helpful and curious.

We haven’t watched “Mouk” as much as “Sarah and Duck” or “Puffin Rock”–but I’m always happy when Joss asks for “the bear on the bicycle” because the colorful animation and variety of settings makes it a treat for me to watch as well as him.

Joss had only just started watching the original “Magic School Bus” series when Netflix released “The Magic School Bus Rides Again” earlier this month. Initially, I felt curmudgeonly and skeptical: why mess with a classic? But the new series grew on me pretty quickly. Joss’s favorite episodes are “The Three Little Pigs,” “Becca Blue, My Fish,” and “Captain Rocket Man”–his titles. My favorite thing about the new series is that the kids all seem to have more fully developed personalities and interests, and Kate McKinnon as Fiona Frizzle is predictably great. (I will never get tired of saying, along with her, “How DO we do that, jingle jingle of the keys?”)

But the old “Magic School Bus” is still fun, and Joss loves the dinosaur, bee and bat episodes especially. While “The Magic School Bus” isn’t as soothing as “Puffin Rock” or “Sarah and Duck,” I’m still glad Joss asks for it (at all hours of the day) because I know he is learning something, not just about science, but about how great it is to be curious about the world around you. As Ms. Frizzle tells her class during each episode, “It’s time to take chances, make mistakes and get messy!”

What are your favorite kids’ shows?