How does your family celebrate Father’s Day? I’m feeling unprepared, but we did get a head start on some Father’s Day crafts that I wanted to share!

True story: I thought these would be something fun for Joss to do on a “stay-home day.” But we quickly ran into a snag when he wanted to put monster arms on a trophy I’d drawn, rather than the monster they were intended for. This led to an extended crying session, although I didn’t realize that had been the trigger. Later, when I did, I realized this wasn’t a big deal. I could remake the crafts myself later, so we ended up with a monster trophy. 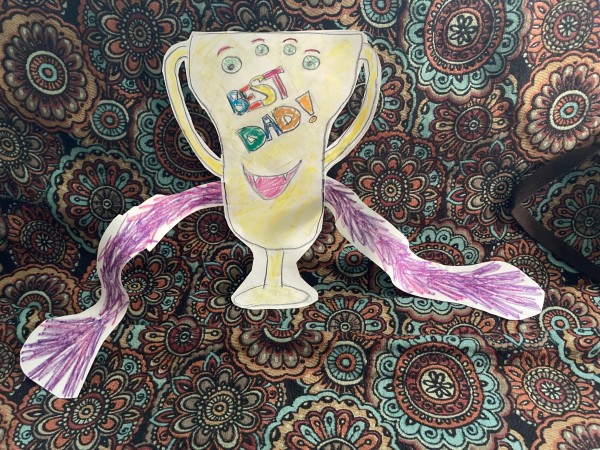 I mean, you just never know how things are going to go. But hopefully your kids can enjoy these creative activities! 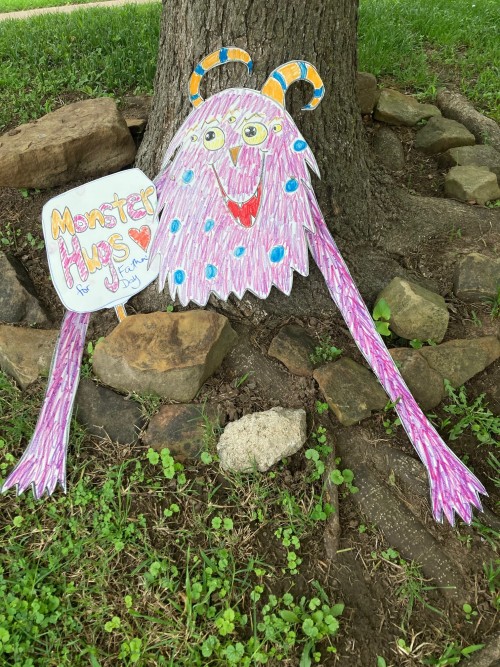 I like this craft because it’s so personalizable! Your kids can have a blast drawing and decorating their own monster. If they’re on the younger side, an adult could always draw the outline and let the kids color it in. So no iteration of this will look the same. Plus, it’s easy.

All you need is poster board and something to color with. Draw your monster shape, and two long arms separately. Color them in, then cut them out and attach the arms to the monster using brads. These let the arms rotate into hugging position!

I gave my monster a sign to accompany it, reading “Monster hugs for Father’s Day.” But the original tutorial I found for this project had the phrase written directly onto the monster’s belly. I just forgot to do that 🙂 They also have their monster a little smaller with extra-oversized arms made out of construction paper. So that’s another option. 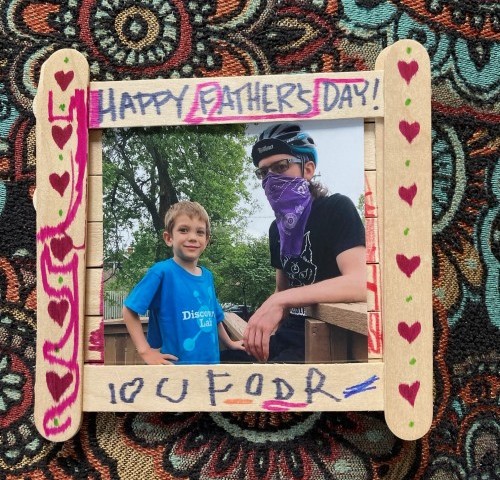 Popsicle sticks are such a great tool to keep in your craft closet. I used them to make photo frame ornaments. This version is a little larger. Simply choose a favorite “Daddy and Me” photo, and lay out your frame base accordingly. You can see in the photo above that I didn’t check the sizing ahead of time. Oops!

I kind of just made this one up based on crafts I’ve made in the past. But here’s an article listing 11 Creative Popsicle Stick Picture Frames, if you’d like specific instructions. And we just decorated it with Sharpies, but if you have Washi tape, stickers, etc., those could be fun to work with as well. 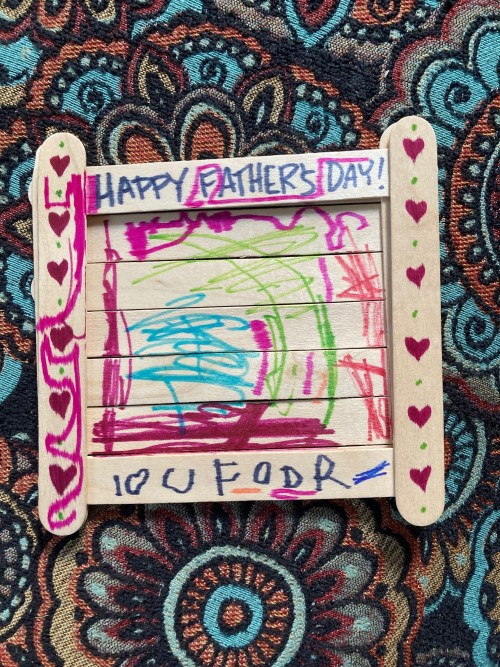 Joss has already wrapped this frame up, but I plan to glue a ribbon to the back so it can hang up somewhere. 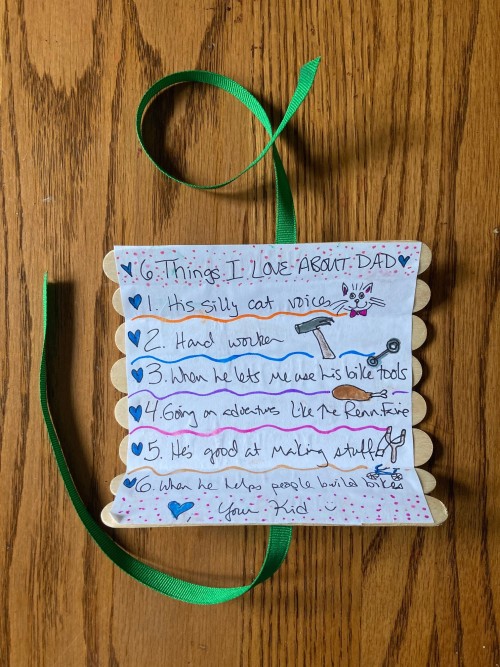 Next, glue your paper to the popsicle sticks. Don’t use too much glue, or your paper will have unsightly ridges in it.

On the top popsicle stick, write “Six Things I Love About Dad.” On the subsequent sticks, write down what you love about dad! For younger kids, an adult may want to interview them and record their answers. Then, decorate your paper!

To finish, glue a length of ribbon to the back of the popsicle sticks. This will allow you to roll up the project like a scroll and tie it together, so it’s a nice surprise!

I found this idea at michaels.com/craft-stick-roll-up-card/B_66311.html.

Unfortunately, I never got around to remaking this one after my first version got turned into a monster (see photo above). But head on over to mericherry.com for an example. Basically, just grab some posterboard or cardboard and draw a large trophy on it. Write “Best Dad,” “#1 Dad” or another Father’s Day sentiment in the middle of the trophy. Then, let your kids decorate it using their favorite craft supplies. Anything goes! Of course, if you have older kids, they can design the trophy and draw on it as they like.

Check out this blog post I wrote for Father’s Day 2020 for six more Father’s Day crafts! Including: draw a portrait, an origami shirt card, spice rub and more.

And if you want to do some crafting as a family, Tiny Things by Bowen will be at Heirloom Rustic Ales on Father’s Day 2021 for “Drafts and Crafts.” I may try to convince Daniel we need to stop by 🙂 Find additional local Father’s Day events and deals here. 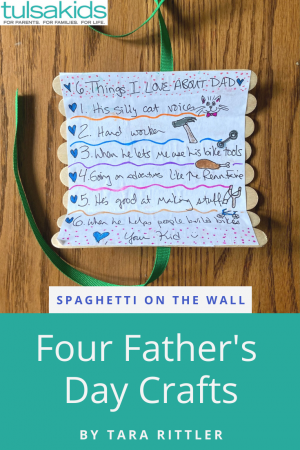