I’ve always been a fan of slumber parties, going to countless sleepovers as a teenager and later, as a mom, hosting slumber parties for my daughters and their friends. In this stage of life slumber parties have taken on an entirely new composition, the grandchild sleepover!

We have several friends who have their grandchildren spend the night every weekend, and while I doubt we’ll ever ascend to that level of grandparenting perfection, we’re aiming for once a month. Our grandson is only 16 months, so we haven’t been as consistent as we’d like, but as he gets older, we’re hoping it becomes more of a regular routine.

We had him sleepover this past weekend, and although we’re still learning and making adjustments (and mistakes) as we go, here are the five lessons I’ve acquired so far:

Safety always has to be the top priority, and with a curious, busy toddler that likes to put everything in his mouth, having a safe environment requires some preparation. Although we have childproofed the house, we tend to get lax in our habits between visits. My husband and I do a sweep of the house before Callister gets here, making sure all medications are off our nightstands and secured in the high medicine cabinet. Coins that have fallen out of pockets onto the floor are picked up, all outlets covered and cleaning supplies put in secured cabinets. We also do an occasional check of smoke detectors to make sure the batteries are good.

Speaking of batteries, stories of children dying from swallowing small batteries scare the heck out of me, so all of our batteries are now stored in a sealed container on a top shelf.

We had our television mounted securely to the wall as soon as he became mobile and curious.

If you have a pool, you need a complete pool safety routine to ensure your grandchild doesn’t drown.

I have the pediatrician’s number on my cell phone, and their office has me listed as someone permitted to seek medical care for our grandson. This section could go on and on and make us all paranoid, but the main thing to remember is that nothing replaces constant vigilance. 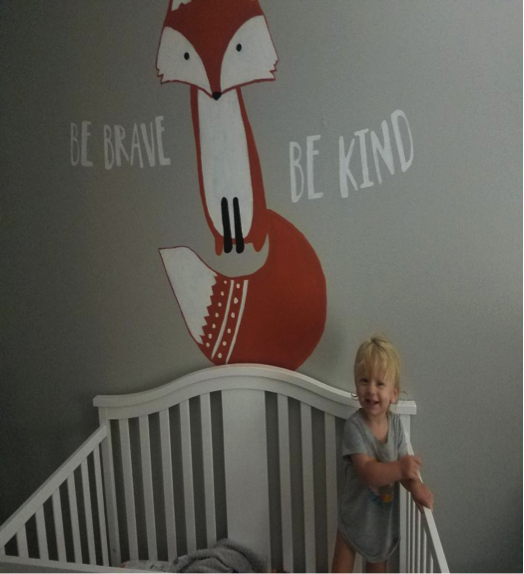 His nursery at our house is childproofed, but he can still find danger. We hope he lives up to the words his Aunt Caroline painted on the wall behind his crib.

2. Stick with the routine.

This will probably become less important as he gets older but for now, we try to approximate his bedtime routine as close as possible. Because I took care of him a lot during the first year of his life, we have a nursery set up, and he is very familiar with his crib at our house. His parents take a walk with him every night before bed so we do also; it seems to be a wonderful calming part of the evening signifying it’s almost bedtime. I know we probably don’t get him to sleep quite as easily or as early as they do, but we make an effort not to undermine their effort at establishing a routine. When he gets older, we’ll bend the rules and let him stay up longer, but we learned the hard way that if we don’t stick with his schedule, we end up returning a tired, cranky boy to his parents the next day. No one wants that. 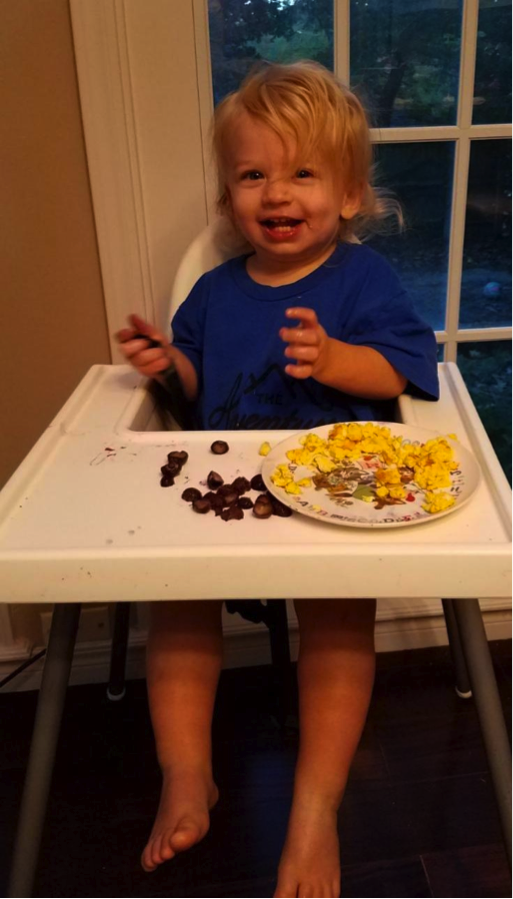 When we offered a sleepover, we’d forgotten it was time change, so we were up by 5:30 instead of 6:30. I made his favorite breakfast of scrambled eggs and blueberries and as a special treat, he got chocolate milk. He was excited!

3. Create a place that feels comfortable and familiar to them.

Although we have the luxury of having a nursery in our home, many grandparents have downsized, making that option impossible. Don’t worry, they don’t actually need an entire room, but do try to have a place that feels comfortable and familiar to them. A pack and play for little ones or a blowup mattress for older kids is absolutely fine. You can make it homey and inviting with a fun, cozy comforter, a few books and a stuffed animal that’s always there for them. We bought a duplicate of his nighttime stuffed animal so he can have it at both houses. 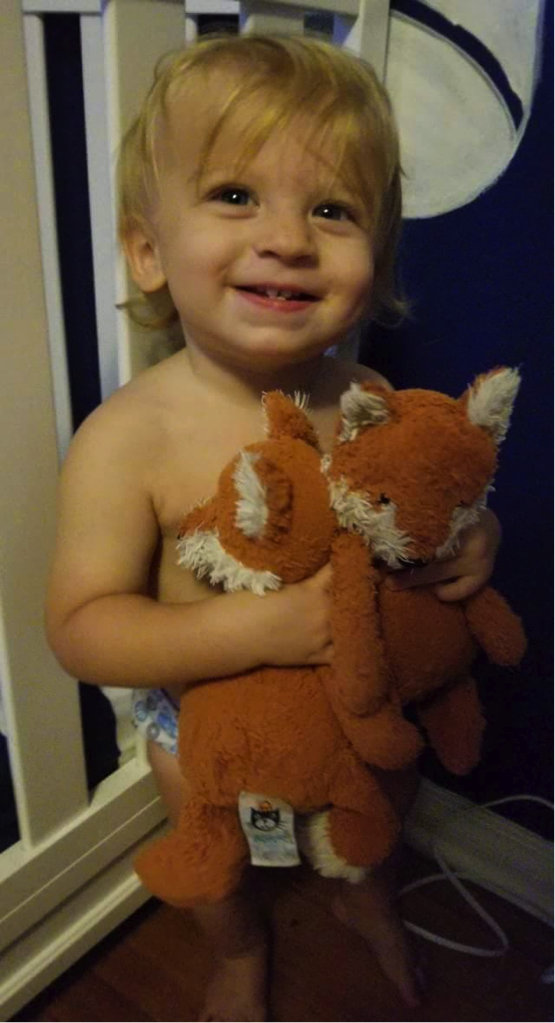 He was pretty happy when he discovered there were two sleepy time foxes!

We try to make it fun, taking a trip to the park and always having dinner at our favorite pizza place. I’ve tried one baking project with him that was a moderate success, and I’m looking forward to the days when we can create a tradition of baking cookies together on his nights with us.

But the most important element of the activities is the focus on our grandchild, spending time creating a relationship with him. Kids crave time and attention, and the memories that will last don’t require going places or spending money. My goal is to create a feeling of being loved that will endure after we’re gone. Somewhere down the unimaginable road when he’s an adult, I know he won’t remember many specifics of our time together, but when the topic of grandparents arises, I hope he has a glimmer of warm memories and a sensation of pure love. 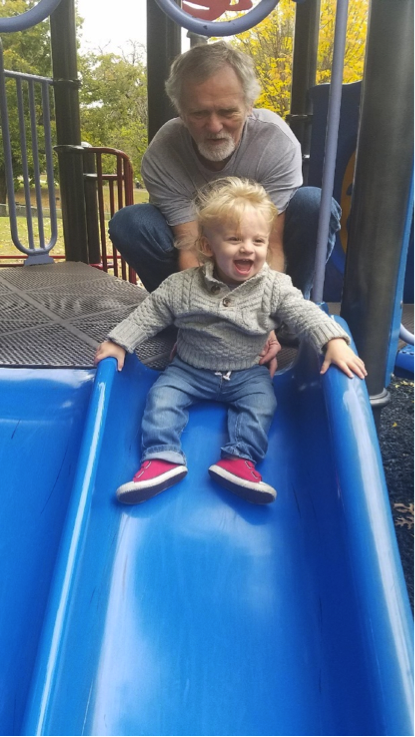 A trip to the park is almost always included in the grandchild sleepover!

5. Expect to be exhausted.

My grandson is a great little sleeper, but when he’s here, I’m not. I listen to the monitor too intently, awaken at any unexpected noise or movement and go in his room frequently to check on him.

When I was in my thirties and my mom was in her sixties, I didn’t understand why she wasn’t enthused about having grandchildren sleepovers, but now that I’m in my sixties, I am amazed she did it at all with eight grandkids in line! I plan the sleepovers for weekends so I can set aside the next day to rest! I attempt to maintain the enthusiasm, keeping a grandmotherly loving smile plastered on my face until their car drives away but before they turn the corner I dissolve into a puddle of tired grandmother, barely making it to the closest couch! 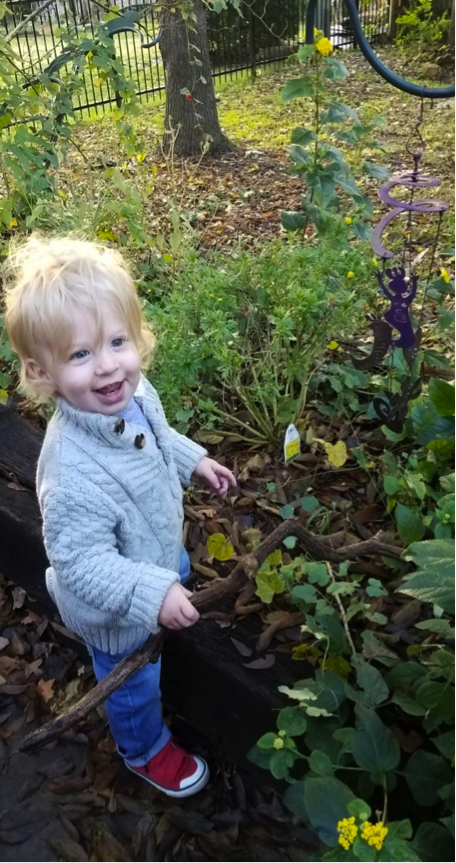 He’s an outdoor boy, so we had some early morning outside playtime after breakfast and before a shower.

My primary motivation for having regular grandchild sleepovers is to establish a fun tradition with my grandchild and create memories. I also remember vividly what it was like to be a parent of young children, in desperate need for sleep and adult time, so my daughter’s well-being is also my inspiration. I want to do for my daughter what I wish had been done for me.

I’m aware that there will be a time when sleepovers with the grandparents are no longer desired, a day when the allure of hanging out with friends beats out a night with grandparents playing board games and watching movies. That’s the normal progression of life but for now, we’re soaking up every bit of grandchild time we can and basking in the naïve bliss that he thinks we’re the cat’s meow. The feeling is mutual, my little grandlove! 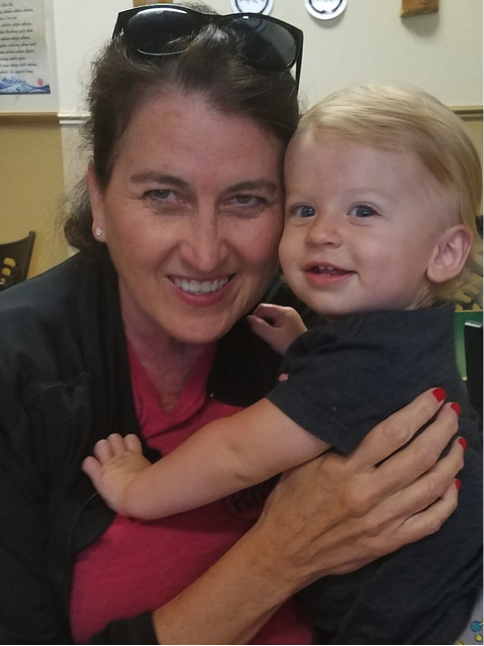