If you’ve been reading this blog for any time at all, you know that our family’s favorite bonding activity is to watch TV together. At our house, TV watching is anything but a passive experience. Think MST3000 meets Statler and Waldorf. And while we love a good cerebral drama, we’ll eagerly play limbo and hang out on the lower rungs of the quality ladder, which is exactly how we recently ended up watching the Celebrity Wife Swap where Tracey Gold and Carnie Wilson switched places.

Carnie and her husband Rob live in a messy, chaotic home where they spend their days pursuing separate interests, while Tracey and her fella Roby live a highly organized life in a not-so-little box made out of ticky tacky with their four boys. Tracey micromanages her house, lamenting to Carnie that her 14-year-old had been insistent on choosing his own clothing for the day of late, while Carnie would rather blow off responsibilities and spend the day at the park getting into silly string fights.

But while our family initially balked in horror at the Gold-Marshall home’s obsession with neatness and order and their insistence on filling the kids’ schedules from sunup to sunset without so much as a minute of breathing room from their responsibilities or each other, we had to concede that they did seem incredibly happy and in love.

Nonetheless, I realized, the Gold-Marshalls would be mortified if they had to spend a day in our home for some of the same reasons I suspect are behind why we’re no longer invited to a certain relative’s MLM parties.

Like Carnie and Rob, we prefer things at a slower pace and don’t tend to fret over things like a messy countertop (unless I’ve just cleaned that thing for the third time today, at which time someone’s likely to get an earful). We embody a chaos core aesthetic, our resident aesthetic expert Lucy tells me. So in honor of Tracey Gold’s impressive household organization skills, I’m breaking down five reasons we’re the chaos core family on our block:

1. We like a good cuss every now and then.

I’d like to say we tried to care about this at some point, but we knew we wouldn’t care if our kids used profanity long before we ever had them on that fateful day when our friend’s then-preschooler Chloe named her My Little Pony a name that rhymes with “Duckety” and all we could do was laugh.

The product of hard-cussing parents myself and a lover of language to boot, I’ve always found it amusing that people arbitrarily decide that certain Anglo-Saxon words are too sassy for the English language while others with roughly the same meaning are adequate euphemisms. When our kids were young, we quickly realized that the only reason to teach them not to use profanity was other people outside of our homes since we didn’t care.

Most adults, even those who don’t curse, employ some type of formality switching in their daily lives, so we wanted to emphasize the importance of reading the room and not using language to harm or offend others. Like all words, expletives, we reasoned, had power in their impact.

When you’ve dropped a brick on your toe, there’s really no substitute for a good cuss, and sometimes, a good strong curse is the most delightfully perfect word in your arsenal. At the same time, we taught the kids that just like spicy peppers, overuse of cusses can offend the senses or even dull the flavor.

The kids have learned if they say a curse word in front of a teacher or use it just for the fun of it, they’re going to get a good talking to, but when the dog drags half a rabbit onto their bed in the middle of the night or they witness a seemingly superhuman skateboarding trick, all systems are go for a big old-fashioned cussaroo. 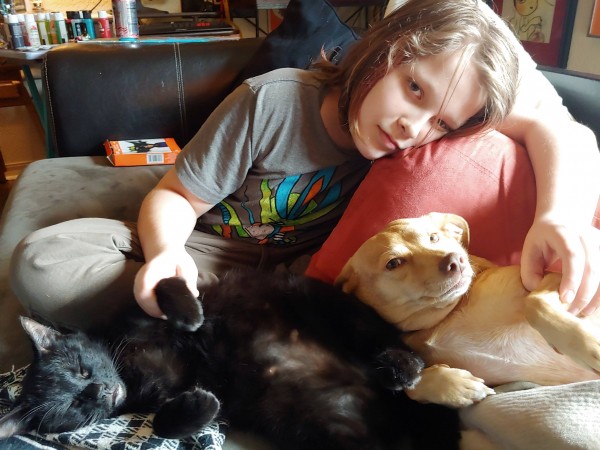 2. We don’t care how the kids dress or wear their hair.

We’ve always felt that bodily autonomy is important as long as the kids are dressed appropriately for the occasion at hand, which is why our kids will fret over the dress code of a party and ask for help picking out a tie but end up decked out in a cape, cloak, or even cosplay when they’re hanging out at home. 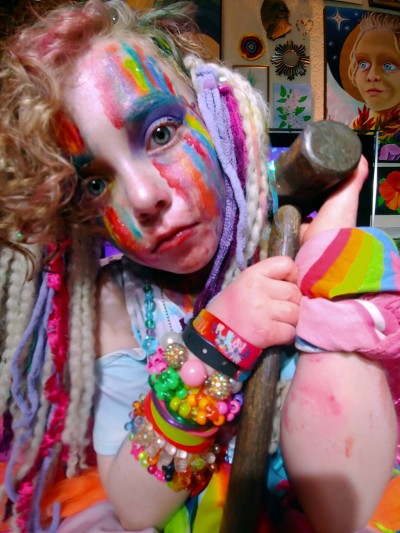 At one point during Celebrity Wife Swap, Roby fretted that his kids had been paraded around town with colorful spray paint in their hair. But our take is that people expect kids to look like kids, to dress in fun ways that adults really don’t usually have the luxury of dressing. Why not let them?

We also let our kids wear their hair however they want to, which for Noah has always meant short and simple. Arthur, on the other hand, has preferred long hair since he was old enough to voice an opinion about it. He doesn’t really understand why men insist on cutting their hair short constantly, and he’d rather just let his grow. 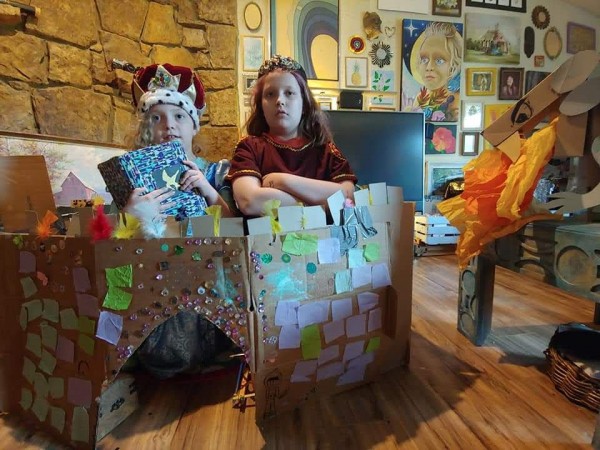 Lucy is on the opposite end of the spectrum, having mostly preferred keeping her curls cut very short, which she feels is more practical and lower maintenance. I do sometimes wish one of my kids would let me braid or style their hair, but I like that they have their own minds and find it important to respect that.

People still make comments about Arthur having “girl hair” and call Lucy a boy, but they don’t even react. As Arthur once told me, “If they’re too stupid to tell I’m a boy because my hair is long, that’s their problem.”

I would never want to judge anyone for pushing their kids into a ton of extracurricular activities. After all, the Simone Bileses and Stjepan Hausers of the world didn’t get to be that way without years of practice starting at a young age.

But we’ll never be the family with the packed schedule where the kids rarely get time to read books or play video games, and we have a hard time understanding how people can live under that much pressure. I’ve known parents who will complain that they have so little free time between taking their kids to all of their activities, and that seems asphyxiating to me. If the parents are exhausted, how must the kids feel? Some of these kids work more hours than most adults between school, sports, and lessons.

That’s not to say our kids don’t participate in extracurricular activities. We’ve spent many a Saturday taking Arthur to debate tournaments, shelled out for Lucy’s guitar lessons and cosplays, and made room in the schedule for chess club and robotics at various times. But we don’t pressure them to sign up for anything, and we would never want them to be involved in clubs and activities so much that downtime is a rare occasion. And there’s simply no way we would spend every day of the week taking all three kids to constant activities at the expense of family time.

4. We aren’t morning people unless we have to be.

During the school year, of course we want everyone to be up with plenty of time to spare before class. But during the summer months, we don’t really see any reason to stay on a typical schedule, and we’ll often stay up well past midnight and then let everyone sleep in.

Although this seems shocking to some of our friends and family, as people who spent years working late schedules in the service industry, we’re not as constrained by societal expectations about daytime productivity. During the summer, we also find evening and night hours are cooler and more pleasant compared to the summer heat.

In our home, the emphasis is always on treating each other with love and respect as opposed to a lot of strict expectations. We don’t require the kids’ bedrooms to be cleaned until they’re fairly messy as long as they’re not throwing things all over the floor or leaving dirty dishes all over the place.

When it’s time to clean, we don’t have set chores for anyone. Instead, we emphasize teamwork. The kids don’t “help” us clean; we all clean together because all of us live here. We don’t allow complaints about who left what where or how it’s “not my mess.” While we don’t let anyone get away with leaving their messes for others, when something needs to be done, we’re all responsible for making sure it’s handled. 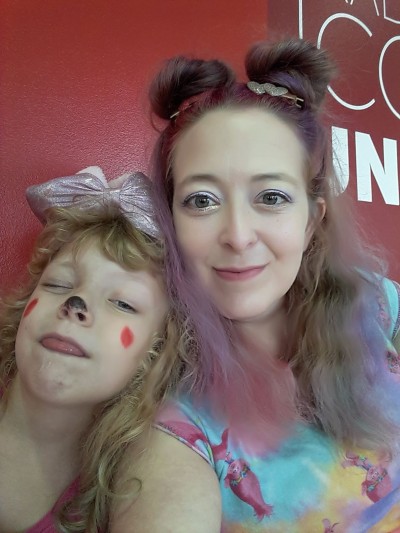 We also emphasize taking responsibility for mistakes. No one will get in a lot of trouble for accidentally breaking or spilling something as long as they’re willing to evaluate whether they could have done things differently, honestly admit their mistake, and help clean it up and make it right. And it’s not whether you lose your cool or say something hurtful; it’s whether you realize how your actions impacted others and try to make it right and do better next time.

It takes all kinds of families to make the world go ‘round, and chaos core living isn’t for everyone! Is your family neat and tidy or do you live a spontaneous existence of mayhem and zaniness? Let me know in the comments, and have a beautiful week in your nebula! 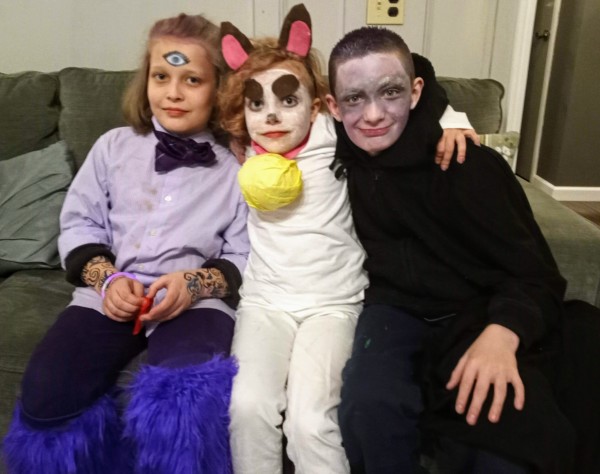 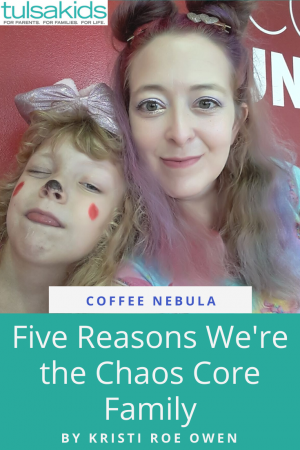