Fist Bump or a Hug?

The importance of teaching kids that they have ownership over their own bodies.

Fist bump or a hug? That’s the question Callister’s teachers ask as they say goodbye to each child at the end of the day. He started attending a parent’s day out program two days a week last fall, and he loves it so much. Since this was his first experience being in the care of someone that wasn’t family, I had some apprehensions–until I heard their question, fist bump or hug? This simple question is indicative of a good understanding not only of respecting a child’s choice but on a deeper level, making sure children feel autonomy over their own body.

The first time I heard the statistics on child molestation I thought I surely must have heard it wrong, but unfortunately, I didn’t. One in four girls and one in six boys will be sexually abused by the time they are 18, and 20% of those will be abused before the age of eight. It’s not the seedy looking stranger in a dark alley we need to fear; 90% of the time it is someone the child knows, often a trusted family member, neighbor, teacher, coach, minister, or friend. The younger the victim, the greater the chance it is a family member. Of those molesting children six and under, 50% were family members. The majority of the abusers are adult males.

Many perpetrators begin sexual abuse through a process called grooming, a slow process designed to gain the trust of the child and the parents. The perpetrators identify a vulnerable child and work to gain their trust by providing special treats and favors. Once trust has been established, they begin isolating the child by offering rides or arranging special outings. Their next step is to create an atmosphere of secrecy, sometimes even threatening harm to the child or their loved ones if the child reveals their secrets. The actual physical contact begins slowly with touches on the arm, a long hug, an arm around the shoulder. Tickling is often used by the groomer since it’s seen by most as an acceptable form of an adult touching a child. Not all tickling is a precursor to sexual abuse, but it is something that should be monitored closely. Excessive tickling can lead to inappropriate touching or if done excessively, can qualify as sadistic behavior. By introducing physical touch slowly and casually, inhibitions are broken down and the child becomes desensitized.

This is not to say every hug is evil and will lead to sexual abuse. Healthy hugs from loving people are beneficial and in fact, some studies show children hugged by their parents on a frequent basis are actually smarter! But the child needs to have the right to choose. The point is to give the child ownership of their body, to instill in them a strong sense of propriety over their bodies. They and they alone get to make the choice over who touches them. If they don’t want Uncle to hug them, they have the right to say no. If your child tells you they don’t feel comfortable going to a neighbor’s house, listen to your child. My father and I had a rare argument over this very issue. He insisted that my young daughters hug my brother (who has intellectual challenges), and when I intervened on their behalf, my father became upset and insisted they had to hug him. My children were afraid of my volatile brother, and I knew I had to make sure my daughters felt safe in the knowledge I would always defend their rights to their choices regarding who touched them. Too often girls are socialized to be polite and submit to touch they don’t want, a dangerous precedent.

There are some things you can do to help reduce the risk of your child being sexually abused. These aren’t one-time discussions; they will need to be repeated often. Here are some pro-active steps you can take but this is not meant as an all-inclusive list.

This all sounds paranoid and cynical but once again, the statistics prove there is a need to be vigilant. I love the idea of giving young kids a choice between a fist bump or a hug. It gives them the power of choice and acknowledges the ownership of their bodies. Taking a cue from his teachers, I now ask Callister, fist bump or a hug? He loves the fist bump and will often make that choice. Of course, I’m always hoping he’ll choose a hug because there’s really nothing better than when he puts his arms around me and gives me one of his big kisses on my cheek. Knowing it’s his choice makes it even sweeter. 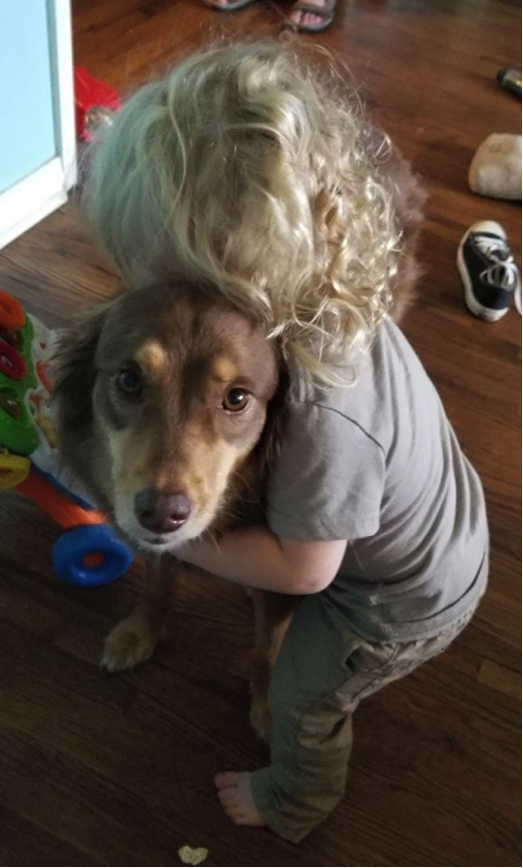 I often get the fist bump but the dog always gets a hug! 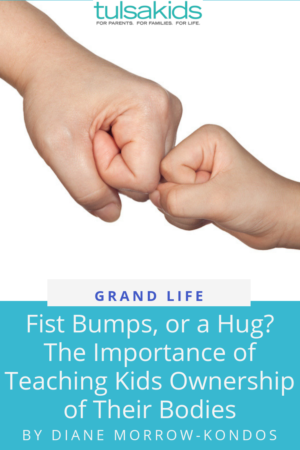