Tulsa’s Family & Children’s Services is primed to host its once-annual poster contest this month. Serving as the agency’s 22nd art competition, the event makes its grand return after a several-year-longs hiatus.

Since becoming the organization’s Chief Communications Officer in 2016, Dee Harris has kept the idea of re-introducing the contest in the back of her mind.

“When I started, I knew I wanted to bring it back because it holds true to the values we hold as an agency,” she said. “Plus, it’s fun and whimsical, and with our 100-year anniversary arriving in 2021, I figured we should ease back into it.”

The competition will kick off August 10 at the Philbrook Museum of Art. Every second Saturday of the month from then until November 15, any kindergarten-through-12th-grade student can use the Philbrook space to work on their project. Second Saturdays are from 9 a.m. to 4 p.m. The F&CS Art Content events will be from 10 a.m. to 2 p.m. There is no admission on Second Saturdays.

On top of providing room to work, though, the kickoff event will also feature several side activities, including a dunk tank. Additionally, counselors will host 15-20-minute sessions about topics ranging from sibling rivalry to preventing bullying.

With the theme of this year’s contest being “Family Traditions,” students are tasked with creating artwork that tells a story about their particular family traditions.

Following the submission deadline on November 15, the posters will be judged over the holidays. Winners will then be selected across several categories: kindergarten and first grade, second and third, fourth and fifth, sixth through eighth, and ninth through 12th.

From there, the Best of Show winner will receive $250, as well as have their piece featured on the cover of Tulsa Kids’ February 2020 issue. Additionally, all winning submissions will be showcased at Philbrook on February 8.

“We have over 53 programs, many of which serve mental health,” Harris said. “Through this contest in particular, we’re promoting awareness to the fact that kids use art therapeutically. This is kind of a fun spin on that that unifies families and helps them talk about the traditions and values they have as a family.”

Just as importantly, this contest highlights the amazing things children are capable of.

“I come from a family of artists, and one thing I’ve learned is that children’s art is still art,” she said. “There are some people who think these lines and scribbles don’t have value, but they really do. Throughout the halls of our nine facilities, you can see that they’re lined with their art – it’s not tucked away in some drawer somewhere. More than anything, this contest is about the value of imagination and helping a kid realize that they have a voice.” 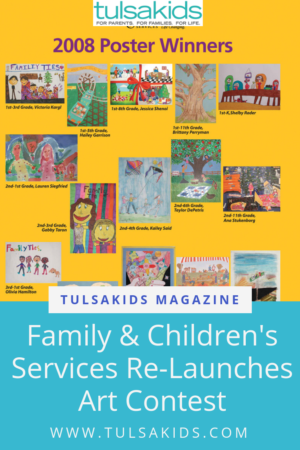