Everything You Need to Know About Tokyo, OK for Next Year

If you love anime and pop culture as much as our family does, Tokyo, OK should be on the top of your to-do list for 2022. Recently name-changed from its former Tokyo in Tulsa and happily settling into its new location with a few new pandemic-related rules, this year’s convention was a testament to the heart behind Tulsa’s anime community and the commitment of the convention’s creators to keep bringing an excellent convention to Oklahomans.

As we milled about at the Hyatt-Regency downtown this year surrounded by incredible cosplays and vendors, it was easy to forget that the pandemic ever threw a wrench in all of our genre convention plans over the past couple of years. The magic and energy were palpable as fans buzzed around the upper and lower levels of the hotel, grateful and inspired to be in each others’ company. One thing that was super cool about the Hyatt for this year’s venue is the setup of the upstairs lobby and the outdoor courtyard, which made it really easy to mingle with other anime fans and run into people we know who we haven’t seen since before the pandemic. 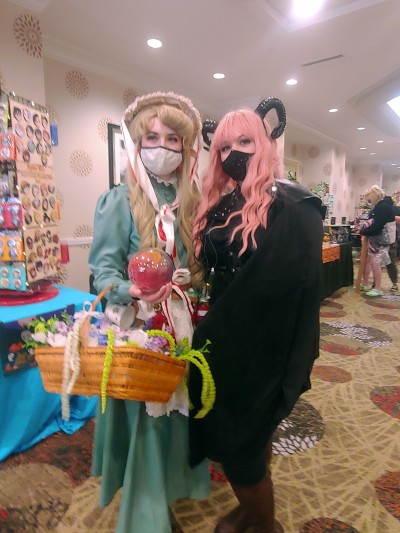 Although this was our family’s first time to use the convention guide app Fan Guru, Tokyo, OK has used it for a few years, and as soon as I realized how easy it was, I started preaching its gospel to everyone I met at the convention like a roadside revival preacher.

The app lets you check out all of the available panels and events and then customize your own schedule. It even gives you notifications when it’s time for an upcoming event. In years past, I’ve struggled to keep track of all of the panels I wanted to attend, but this handy little app made it easy to know what was on my agenda and make it there with plenty of time to spare. The only challenge was choosing between some pretty fantastic panels. 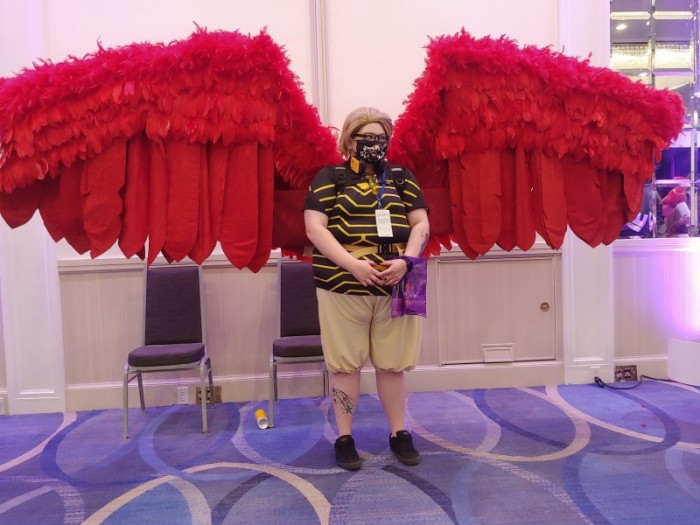 I’ve been to other conventions with a sparse collection of panels. But with Tokyo, OK, there is so much quality content it can be tough to narrow down all of the panels you really want to hit. Since some of the rooms at Hyatt Regency are a bit on the smaller side, it’s important to get to your favorite panels early to make sure you get a seat. Arthur and Lucy were super stoked about checking out a My Hero Academia panel, and there was only room for about 45 attendees, so they were pretty lucky to get in. 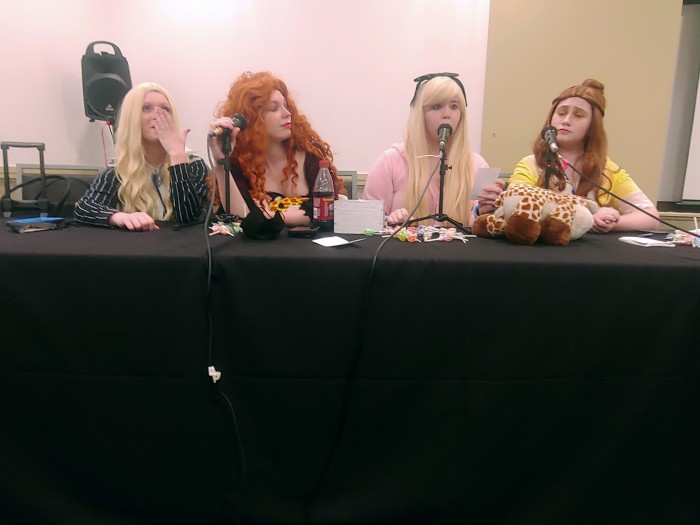 There was also a good range of content including topics in anime, manga, cosplay art, drawing/animation, and voice acting, among others. Another thing I thought was especially cool was the range of activities for younger fans. It’s clear that Tokyo, OK is aware of how many younger anime and manga fans are around, and they’re working to offer more family-friendly opportunities during the convention. 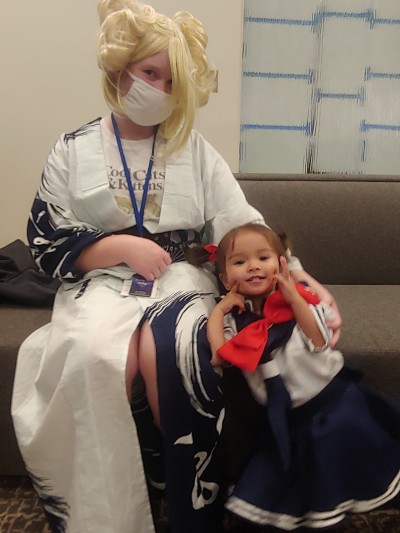 Here is a small sample of some of the panels available this year:

One of the best parts of checking out a convention like Tokyo, OK is the opportunity to pick up all kinds of great merchandise and art and talk with some of the talented folks that create or curate their selections. It is also super exciting to get to meet with some of the fantastic digital artists and voice artists that make some of our favorite animes a reality! 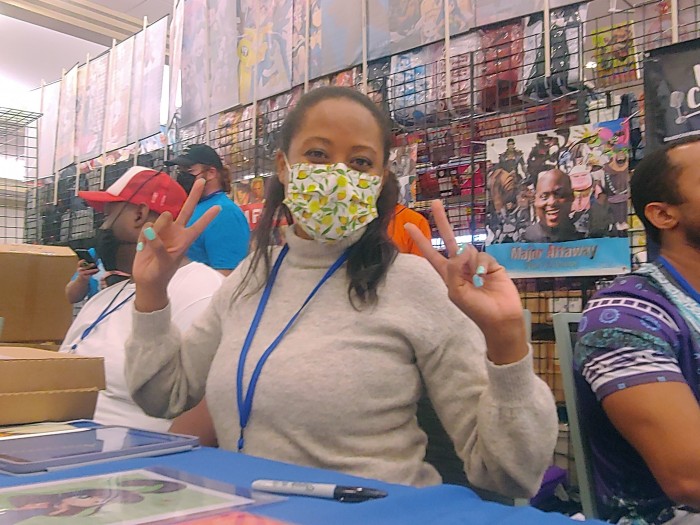 Gorgeous fan art, original manga, cosplay pieces, armor, custom weapons, and clothing are just a few of the things you can purchase while supporting artists and small businesses, many of them local. Even when you don’t have enough hands or storage space in your Bag of Holding to pick up everything you want, the vendors’ alley is a good way to find out who has what and follow them on social media so you can pick up their fantastic merch later on. 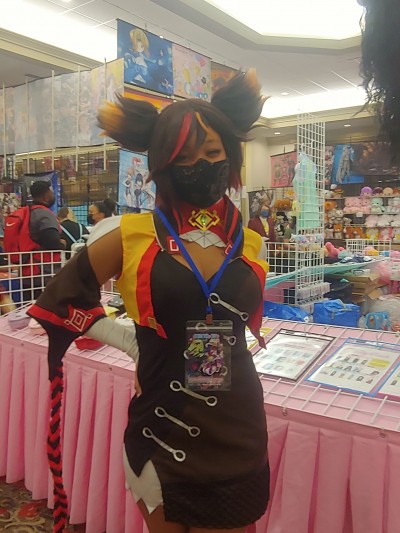 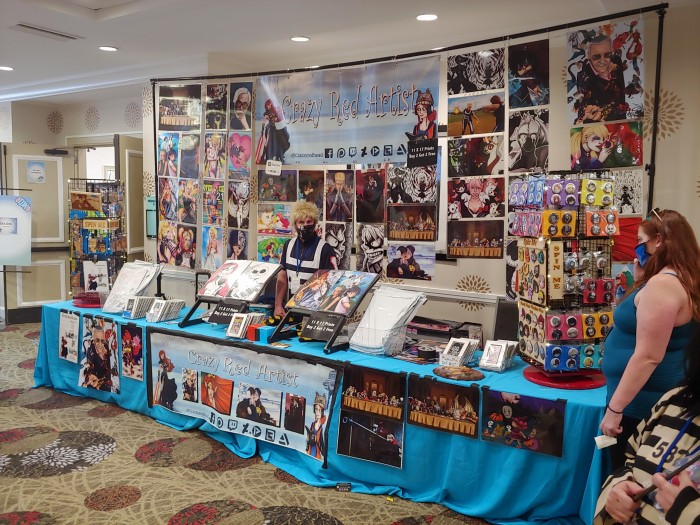 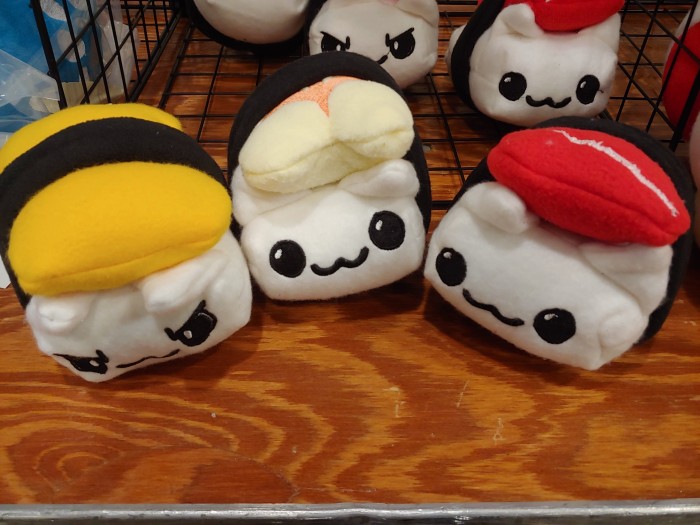 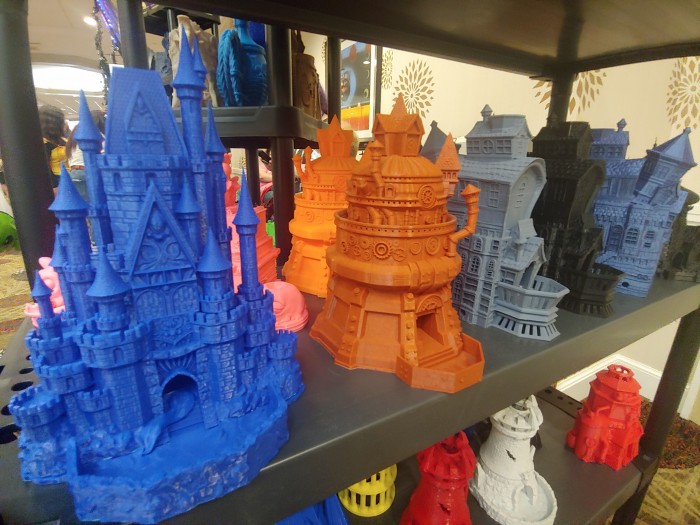 If you only prioritize one thing for next year’s Tokyo, OK, make sure it’s the big cosplay competition. The cosplay stage show gives hard-working cosplayers a chance to show off all of the countless hours they’ve put into their creations. It’s also incredibly inspiring to see some of the incredible creativity at work. Try to show up early, since every seat will probably end up getting filled. 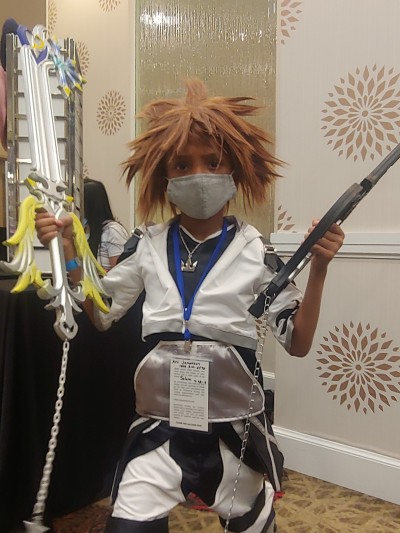 If you have kids who are just getting interested in cosplay, this is a great way to introduce them to the level of work and commitment that goes into each cosplay. It’s also a good opportunity to teach kids some important cosplay etiquette. 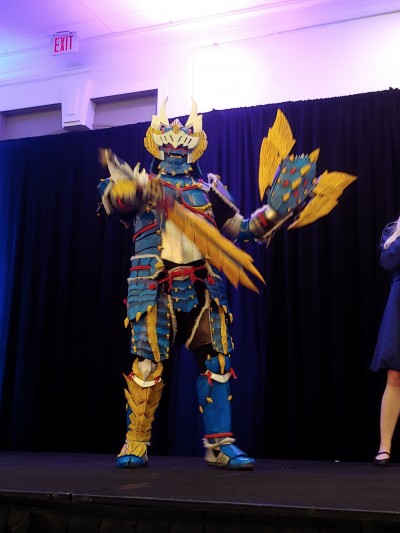 Here are a few things to remember when you’re teaching your kids about cosplay and conventions: 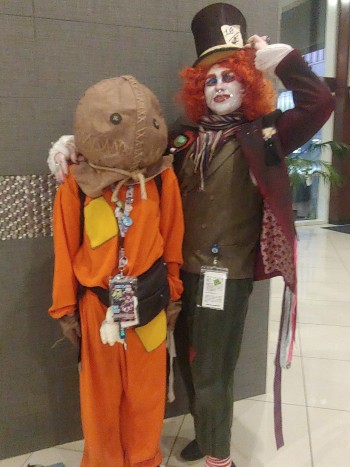 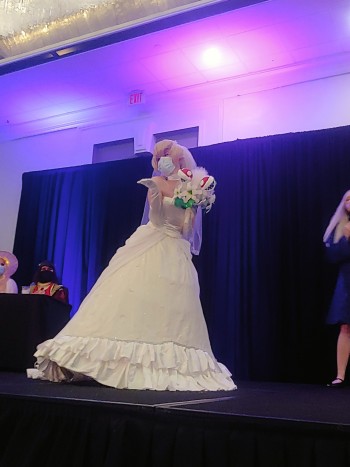 The venue setups were nice, and this gave attendees plenty of room so they weren’t crammed into the main venue. However, if I had older teens or young adults I knew were attending on their own or with friends, I would direct them to take an Uber and check in before and after changing venue sites. 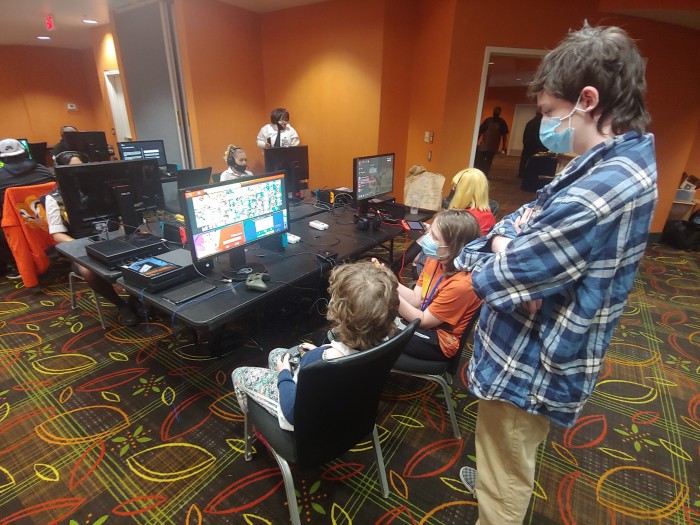 As I walked with Arthur and Lucy from Hyatt to Holiday Inn around sunset, we ran into a couple of young adults who couldn’t access the map without wifi and had gotten lost. Of course, we were more than happy to “adopt” them for our walk, but I also made a mental note to let readers know to plan ahead so this doesn’t happen to their kids. Downtown Tulsa is like any other city, meaning it’s important to consider safety and be aware of one’s surroundings when walking around, especially at night. It can also be eerily sparse as it was when we were there. Since cosplays can make movement difficult, it’s especially important to be careful if a person is wearing a cosplay. 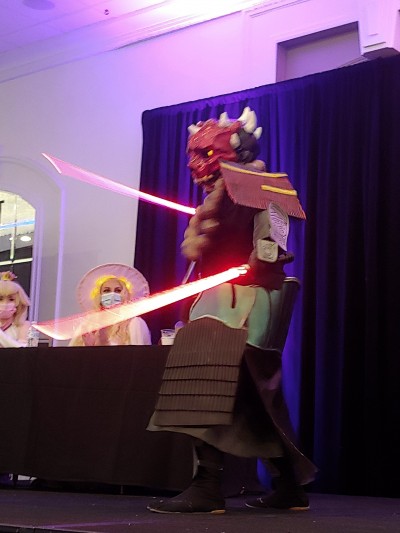 Before we parted ways, I gave the kids we ran into one of my personal alarms that I carry in such situations. A six-pack is like $18, and they’re loud enough when you pull the pin that no one wants to stick around. They have a carabiner on them that can easily (and discreetly) hook to a cosplay or a bag.

A convention is just as safe as any other big event, possibly safer because there’s loads of security around and a really fantastic community that’s eager to have someone’s back. But it’s always a good idea to plan smart for safety, especially if someone plans to walk around downtown at night. If you’ve got a teenager, adult child, or loved one who plans to visit a convention on their own, here are a few safety tips: 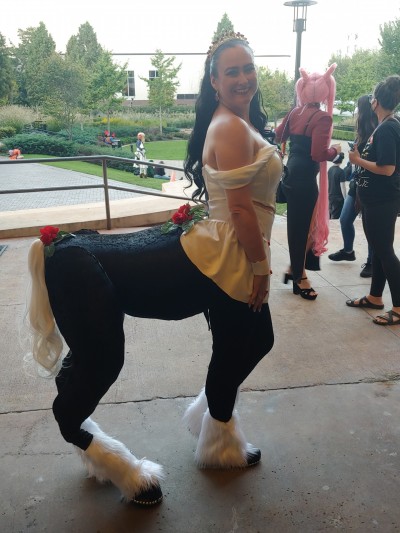 Now that you’ve got the DL on Tokyo, OK, it’s time to start getting ready for next year and planning your cosplay! Get a head start on the fun with Early Bird Passes, or go all out with a Sakura Club Membership. A friend of mine got one and assured me they’re worth every bit of the hype. Be sure to binge my favorite anime, Sword Art Online, on Crunchy Roll or Hulu while you’re working on your amazing creation, and have a beautifully artistic week in your little nebula! 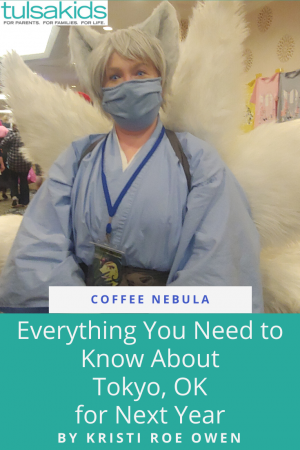