Every Person Is Worthy of Dignity and Respect

When Dr. Tamecca Rogers’ young son Keith wanted dreadlocks, Rogers’ immediate response was “no!” She didn’t want Keith to be unfairly judged because of his hairstyle choice. Having been through the hair discussion with one of her older sons, who is now 24, Dr. Tamecca Rogers felt the familiar protective fear that mothers of Black sons feel. 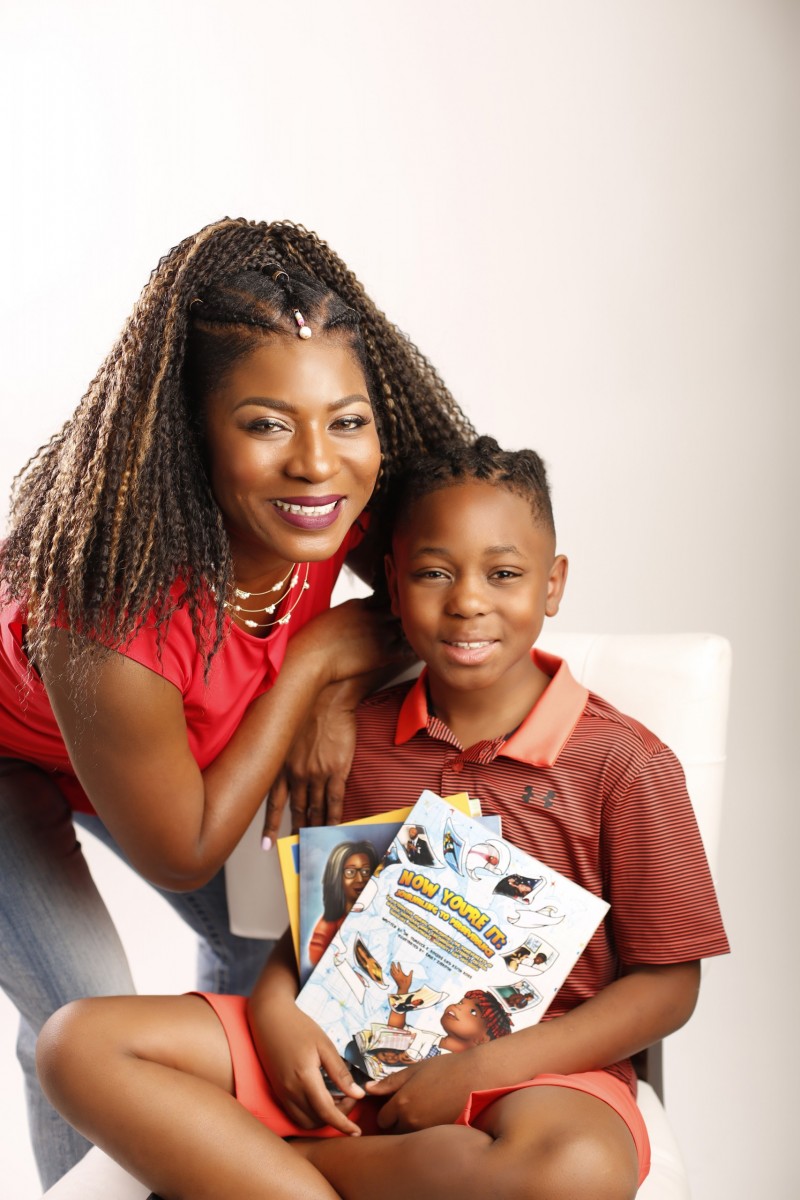 “I think as a mom, I’ve done a lot of growing over the years,” Rogers said. “So with Ian, my first baby, he wanted dreadlocks, and I said ‘They’re going to judge you if you wear dreadlocks. You have to have a clean cut at all times.’”

When Ian was looking for a job, Rogers told him that an employer wouldn’t look at him twice. “I know when I was looking for jobs, I would wear straight hair,” Rogers reflected. “That’s how we talk, and we pass that along to our kids. And a lot of that is fear, but it’s not unjustified fear.”

With 10-year-old Keith, Rogers faced her fears and allowed Keith to wear his hair the way he wanted to wear it.

“I have grown,” she said. “It was a fear of mine that he would be judged and portrayed a certain way. I just didn’t want that stereotype on him just because of a hairstyle.”

For now, Keith is “the cool guy” at school, Rogers says. “He loves it and takes pride in it. It’s a part of him.”

That learning process was the impetus for Rogers’ first children’s book, “Momma, May I Be Me” by Dr. Tamecca S. Rogers and Keith Ross; illustrated by K-Shaniece M. Smith. Written in English and Spanish, the book is a conversation between a mother and son about the son’s wish to grow his hair long and get dreadlocks. The book  includes some history of dreadlocks and, armed with information, how the son comes to his ultimate decision.

Dr. Rogers is a Tulsa native, a mother of three boys, and the Director of Diversity, Inclusion, and Equality for Tulsa Technology Center.  She served five years as a hospital corpsman in the United States Navy and a combined six years as a high school instructor and college enrollment counselor.

“I have called Tulsa my home for 38 years,” Rogers said.  “I am a proud mom of Ian, 24, Chazen, 19, and Keith, 10. Ian is my oldest son and he is responsible, confident, and a hard worker. Chazen is my middle son, and he is caring and typically the peacemaker. Keith is my youngest son, and he is outgoing and dances to his own beat.”

“Momma, May I Be Me” was the first of seven books for children that Rogers has written, all but one with her son Keith. 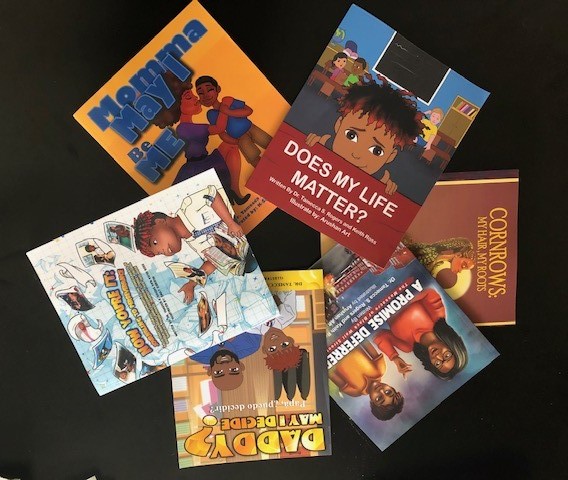 Rogers uses the books as an opportunity to educate both children and adults through storytelling. At the same time, the projects allow her to learn together with Keith.

One recent book, “Now You’re It: Journaling to Perseverance,” is an interactive book packed with projects, inspiring quotes and brief biographies of famous Black figures throughout history. It includes writing prompts that encourage children to think about their own identities.

In the past year, due to the COVID-19 pandemic, like most families, Rogers and Keith had extra time together. They spend a portion of this time researching and writing about the Tulsa Race Massacre.

May 30, 2021 will mark 100 years since the destruction of the once vibrant and prosperous neighborhood of Greenwood in the then segregated city of Tulsa. This neighborhood was the hub for black businesses, schools, stores, and more.  The neighborhood flourished despite the Jim Crow laws of the time.  The neighborhood was so influential, it was referred to as Black Wall Street. Due to an accusation by a young white woman about a young Black man in an elevator on May 30, 1921, the entire community was gone. In less than 48 hours it was burned and pillaged by angry white residents, leaving most of its Black residents with nothing.

Many history courses do not address the Tulsa Race Massacre even though it is a turning point in the history of the city.  It is common to hear an Oklahoma native say they never heard of the massacre, and that includes people born and raised in Tulsa.  Most Tulsa natives learned of the horrific event for the first time within the last decade.  That means so much time has passed with such a historical and tragic event going unrecognized by many of its residents.

“My children did not learn about the Tulsa Race Massacre in school and neither did I,” Rogers said. “I recently learned about it a few years ago and I was absolutely shocked. I couldn’t understand why we weren’t taught this in school, especially since it is mandatory to take and pass Oklahoma History.”

Rogers seized the opportunity to teach Keith about Black Wall Street and the Tulsa Race Massacre.

“My son asked questions that were hard to answer,” she said, “not only because of the devastation that happened, but because of the disappointment and disbelief in his face. He looked at me and said, ‘Momma, I think everyone should learn about this.’” 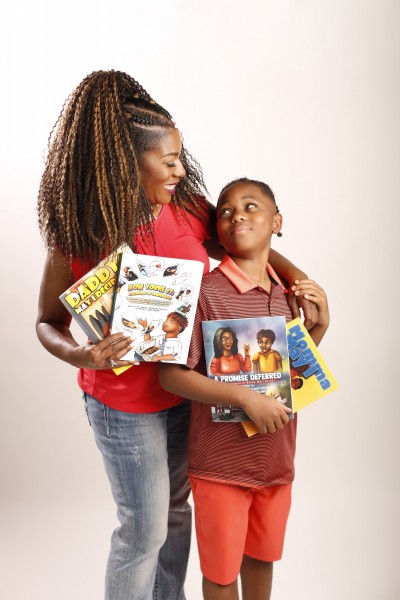 The many incidents involving police brutality that occurred or resurfaced in 2020 have stirred the conversations about race relations in America.  To some it may seem like a new exchange of ideas, but to others it may seem like much of the same.  Navigating this climate of race and human rights can be overwhelming.  This task could be twice as difficult for parents. Rogers hopes her books will help provide a starting point for direct and meaningful conversations.

While Rogers says she loves Tulsa, she also sees that the citizens of the city have a lot of work ahead of them to improve life for all Tulsans.

“If I am being perfectly honest,” she said, “Tulsa has a lot of work to do pertaining to diversity, equity, and inclusion. I remember when I decided to move back to Tulsa from California, after serving my country for five years, to be close to family. I was excited to come back home. I figured I would be able to land a job quickly. At the time, I had a master’s degree, I was a veteran, and I had medical experience.”

Rogers said she sent out “tons” of resumes, but never received one call for an interview.

“I had a feeling that it was my name,” she said.  “I have an ethnic name and, therefore, when my name is the first thing some people see on a resume, they tend not to call back for an interview.”

To test her name theory, Rogers changed the name on her resume from Tamecca to Tammy.

“I sent my resumes out to the same companies,” she said, “and within a few days, I received several callbacks for interviews. With that being said, I didn’t get hired at the time, but I did get interviews.”

She said that, even with her education and qualifications, it took several months to land a job, one for which she was overqualified with low pay and undesirable hours.

“I have struggled with my views of Tulsa because it’s bittersweet,” she said. “I have an amazing family and great friends, but it is clear that discriminatory policies and systematic racism still exist.”

Not long after she had returned from California, Rogers said she and a friend were stopped by police just for driving to pick up some food. She also experienced on-going racism when she was teaching at a school district outside of Tulsa. She was the only Black teacher, and there was only one Black student. Some of her students would call her derogatory names and exhibit other racist behaviors. When Rogers reported the incidents to the administration, nothing was done. Because of the toxic, disrespectful environment, Rogers said she cried going to work every day, but she had children to support, so she kept the job for two years.

Her two older children have also experienced racism. One son expressed frustration in math class at not getting a question answered after having his hand up for some time. He took his glasses off and flung them on his desk, a gesture most would consider mild. The movement was not directed at anyone. The teacher, however, felt the act was aggressive, called Rogers, and referred her son to anger management counseling.

Even though Rogers thought the punishment was extreme, her son complied. At the time she warned him, “Know that your moves and your actions can be considered as aggressive because you are a Black boy.”

While her two older sons have had experiences with racism, she is thankful that Keith has not, at least to her knowledge. She does, however, wonder when Keith will stop being the “cute” boy that everyone sees. At what age will he, like her other sons, grow tall, have a lower voice and perhaps be perceived as a threat.

“Unfortunately, it’s an experience that we expect and sometimes become numb to,” Rogers said. “As a mom, it’s hard raising Black young men. I worry about their safety. I have to give them ‘the talk’ about how they can be perceived as a threat, although they are loving children. I must talk to them about the importance of making it home safe. It’s hard for them to understand, and it’s hard for me to talk about.”

As the anniversary of the Tulsa Race Massacre approaches, Rogers hopes the future can be instructed by the lessons of the past.

“I hope that the Tulsa community could commit on every level to end systemic racism in all forms,” Rogers said, “to ensure that my sons and other minority children can grow up in a community that values them as full human beings worthy of dignity and respect.

NOTE: If you’re a parent wanting to speak with your child about the Tulsa Race Massacre, The Greenwood Cultural Center is a good place to start.  Also, there are several books available including the one mentioned in this article by Dr. Tamecca Rogers. All of Dr. Rogers and Keith Ross’s books are available on Amazon.  If you are in the area of downtown Tulsa, consider taking your children by the John Hope Franklin Reconciliation Park to read the plaques and learn of some of the good work that occurred in the Tulsa community after the tragic events of May 2021.  TulsaKids also keeps a list of resources at www.tulsakids.com. 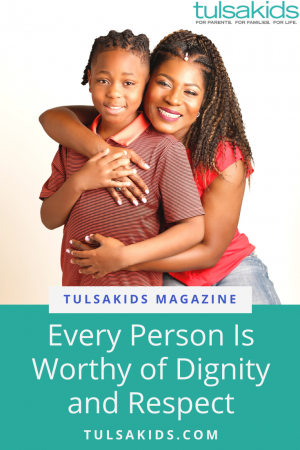 Thank You for Reading This! Naming and Explaining “Gratitude” and Other Abstract Concepts in Children’s Books