10 Ways of Remembering a Friend

I‘ve been writing this in my head all weekend, but now I don’t know how to start. To be direct, an acquaintance–someone I would have called a friend 8-9 years ago but had drifted apart from–passed away just over a week ago of natural and frustratingly, heartbreakingly uncontrollable causes. I was low-key worried all week that snow, ice (and later, car problems) would keep us from attending the memorial service this past Saturday and am so grateful none of that came to pass and we were able to be there, listening to friends and family share memories and realizing more and more just what a loss his life is.

So I just wanted to share a few ideas from the memorial service that I think would be good to hold on to:

1. You don’t have to be the loudest person in the room to make a big impact

As a self-acknowledging Quiet Person, it was encouraging to be reminded that, although this friend was described multiple times as “stoic” and “calm,” he had a huge impact on a large group of people, for reasons that will be made clear as you read.

2. Be there for the ones you care about

Reaching out to someone going through a tough time can really make a difference, just letting them know that you are there if they need anything. I’m not always great at this–some things I might be willing to do to help a friend but others (usually involving driving any distance), I’m not. I think it’s fine to not commit to doing things you really don’t want to do, but I want to remember to be generous and dependable as well.

Several of the stories told at the service involved impromptu road trips–something I have probably never gotten excited about, and that’s fine. Adventure can be found closer to home, too. But I shouldn’t be so scared of car accidents that I miss out on making some really great memories with friends and family.

4. Be respectful of the people who serve you

As an erstwhile barista, I know how frustrating it can be to be treated like you’re nothing, that your experience and knowledge doesn’t matter, etc. And also how obnoxious it is to, on the other hand, have a customer be overly familiar like you should be their best friend even though they’ve just brought a giant group in behind them and the stress level has just exploded. Since I met this friend through coffee–back in the days when we both were at Doubleshot daily–it wasn’t surprising to learn that he treated his baristas with respect, but what was how many genuine friendships developed because of that.

Since ‘excellence’ is one of my themes for this year, I wanted to include this. Back when we were friends, we bonded over an interest in learning more about quality food, flavors, etc. We had a flour-tasting meal, in which everyone brought a dish made with a different kind of flour (rice flour, almond flour, etc.)–just so we could experience what made them different and some new tastes. Another time, a group of us spent an evening making chocolate–from scratch. Like, from raw cacao nibs to a finished (grainy and perhaps barely edible), bar of chocolate. It took forever, it was frustrating and there was little payoff–but I’m glad I have that memory. Another group of us went to Palace Cafe for the first time, back when there were way fewer high-quality local restaurant options. And although neither of us had been daily Doubleshot regulars for awhile, I know from hearing other people’s stories that that love of really quality food and drinks hadn’t changed.

6. But enjoy simple comfort, too

Just because you have high standards doesn’t mean you have to be uptight. Game nights, movie nights and pizza were brought up a lot at the memorial service–hanging out with friends regularly. A couple people brought up that they didn’t have any BIG memories to share regarding this friend, but what stood out was the way he impacted their everyday lives, time and again. It’s hard when you have kids and schedules that can be whack/hectic, but I’d like to remember how great it is to just have friends over and enjoy time with them. It doesn’t have to be a big to-do (although I do usually use any get-togethers as a house-cleaning incentive), but just having a space available for friends can really be a blessing to them, not to mention yourself.

7. Just because you lose touch with someone doesn’t mean the time you had was insignificant

I know I wasn’t the only person at the memorial service who hadn’t spoken with Matt in several years, other than to wave or say hello in passing. Family members spoke who mostly knew him as a child, and it’s just the nature of relationships that they change–evolving or fading away at times. And at first, I didn’t know how to feel about his death, or if it was even okay to cry over someone who was, at this point, not a significant presence in my life. But after spending a week thinking about all the good memories I did have, and how this was someone who was important to many people I know, I realized that of course it’s okay to mourn alongside people who knew him better because the point is to honor his memory, and that being part of a community can be hard but you’re there for each other, and because the thought of never seeing someone again really hurts, whether you saw them every day or just a few times a year. People matter, and their loss is significant no matter what.

I know “Buy Local”/”Eat Local” etc. are catchphrases and hashtags, and to be honest I’m not great at this because the main factors I take into consideration when shopping are price and convenience, which means Amazon gets way more of my spending dollars than they probably should. And I don’t know if that will change, to be honest. But hearing from local business owners/employees how much Matt’s support meant to them should cause me to think about where I’m spending my money and to consider the value of spending it locally, not just to support the local economy but to support people and the things they are passionate about because truly does make the world better.

I’m not talking about Nike, but another trait that impressed me from the service was that Matt didn’t put things off, he got them done. If he noticed that something needed to be fixed, he fixed it. I don’t know how often I say, “I’ve been meaning to do that…” but it’s a lot. If there’s a deadline, I can meet or exceed it, but if it’s just something I have vague intentions about, it may not get done for weeks, months or years.

I know this sounds like point #2, but I’m thinking more about romantic relationships here. It really is easy to fall into a routine of doing just the basics, making dinner, vacuuming, washing dishes, etc., and while this can be showing love, in my case it’s a lot more just “doing what has to be done,” accompanied by low-key resentment when I don’t feel like I’m getting enough help. So a key takeaway from the memorial service was that, despite worsening health problems, Matt always seemed to put his partner first, going above and beyond to make their house into a home, and that’s just something else I’d like to be more mindful of. Not in a “Why aren’t you doing this for me?” way, but in a “How can I do this for you?” way because the only person I can change is myself.

I have more thoughts, but ten seems like a nice number. The main thing is to be a kind person, to respect and reach out to those around you, whether they’re family, friends, baristas or strangers who need help. One final thing is that some of Matt’s photos are currently on display at Chimera, and there are a lot of great photos of Tulsa, in particular the Tulsa cycling scene. So if you like any of them and want to purchase a print for a suggested donation of $20, the money will be donated to the National Organization for Rare Disorders. I think they will be up till the end of the month. 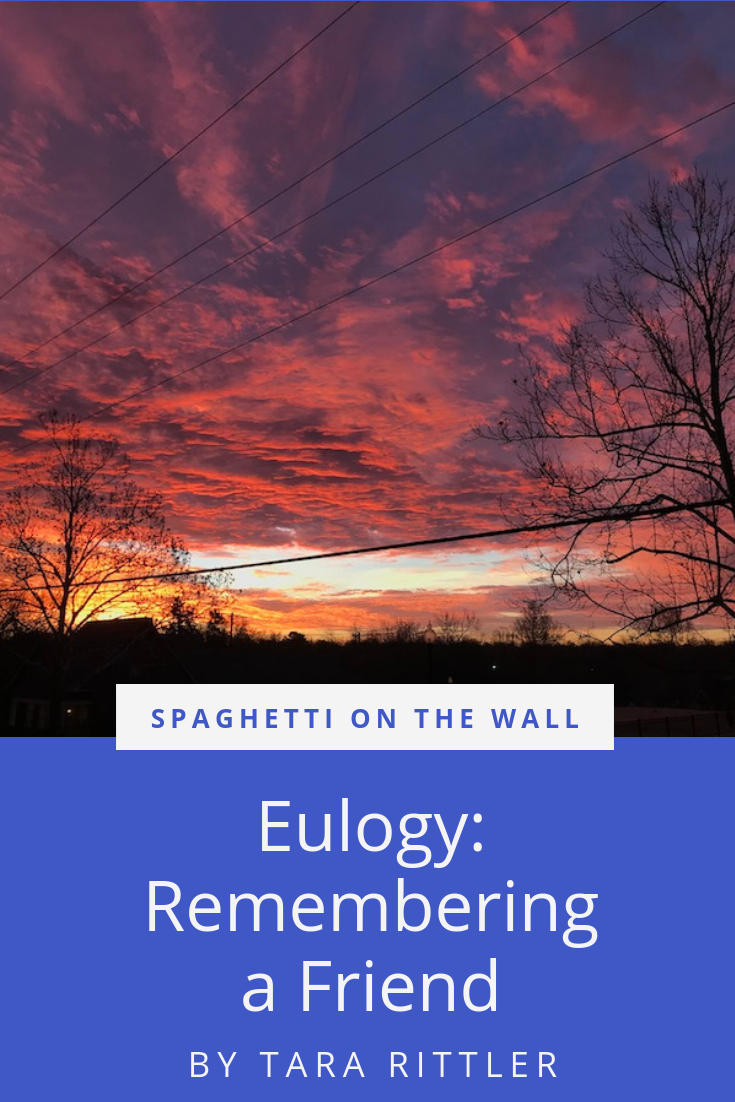