Last Sunday, we’d been planning to drive up to Wichita for the day. Our plans changed, but I still wanted a mini-adventure! Thankfully, Daniel agreed to help me cross a couple items off my bucket list: Ed Galloway’s Totem Pole Park and the Blue Whale of Catoosa!

If you take I-44 E, Totem Pole Park is just 45 minutes northeast of Tulsa, in Foyil, Oklahoma. According to nps.gov, it is “the oldest and largest example of a folk art environment in Oklahoma; its construction lasting from 1937 to 1961.” Galloway was a folk artist who worked in a variety of media. His 90-foot totem pole and surrounding objects are made out of stone and concrete, “reinforced with steel rebar and wood.” 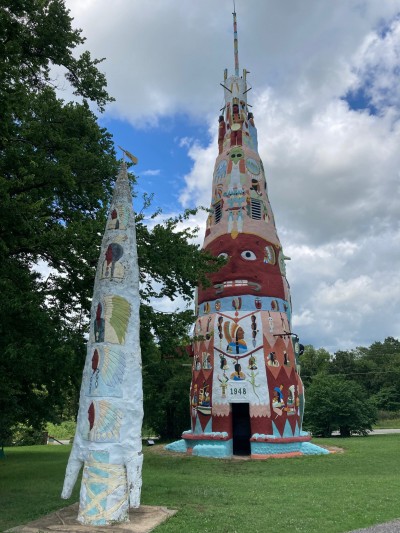 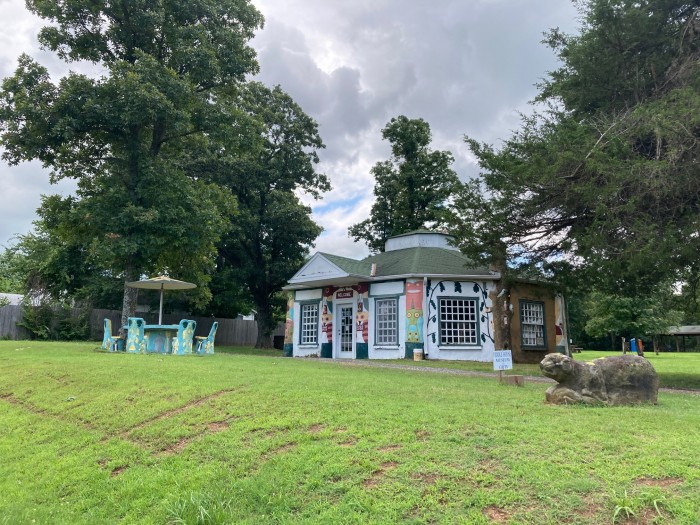 But Galloway also made beautiful wood furniture and his famous collection of 300 fiddles, all carved using a different type of wood. I asked the woman in the gift shop if he played the fiddle, and she said, no. He just liked the shape as a way to show off the different grains of wood. Furthermore, he made the fiddles for display, not for anyone to play. 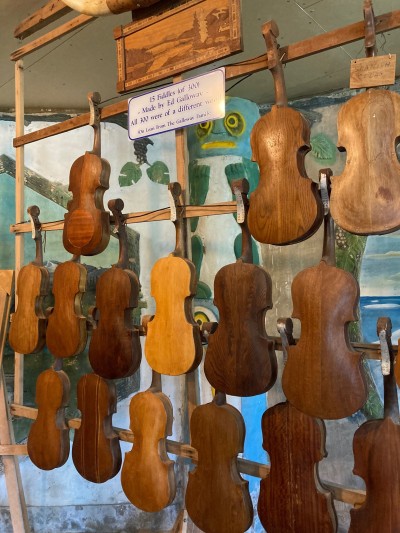 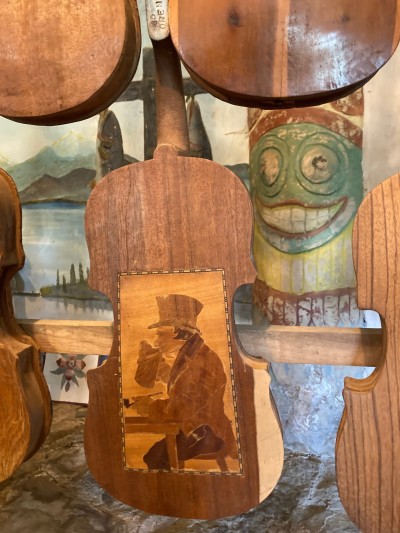 You can buy a variety of reasonably priced items in the gift shop. Proceeds go are used to continue restoration work on Galloway’s monuments. (You can see in the photo below that the large totem pole has been repainted, while some of the other work has faded.) A family leaving as we arrived had purchased $3 wooden whistles for their kids. The mom sighed, “I have some regrets right now.” Thankfully, Joss was happy with a carved pen and bag of candy rocks. The gift shop is open Monday-Saturday, 11 a.m.-3 p.m. and Sunday, 12:30-4 p.m. 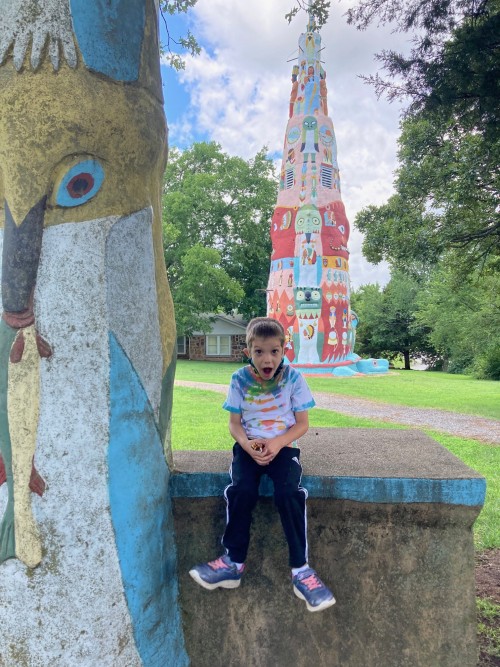 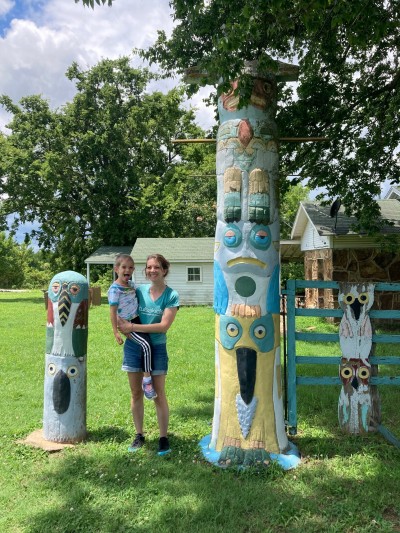 If you visit, I’d recommend bringing a picnic. There are some Galloway-made tables to eat at, and a large grassy area for dogs to run around in. It doesn’t take too long to walk around the park and Fiddle House. You can go walk inside the large totem pole, and then enjoy looking at the other art. But I think we were probably only there about 30-45 minutes. Although there is a large collection of newspaper clippings giving a larger insight into the history of Ed Galloway and his art, so you could definitely spend time reading through that. But I don’t know if Joss would have appreciated that. 🙂 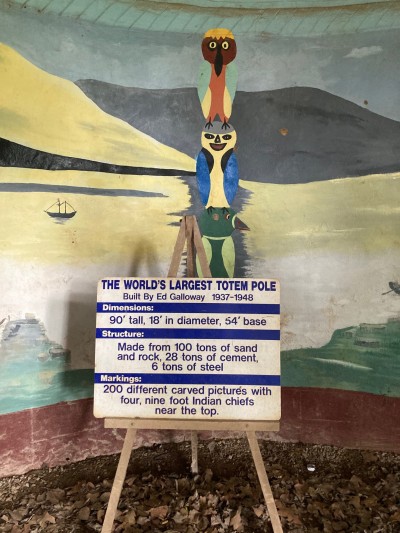 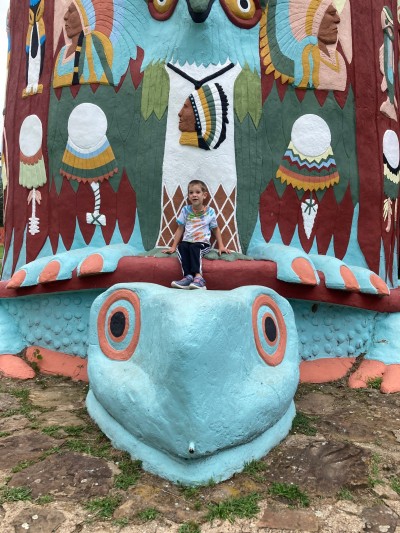 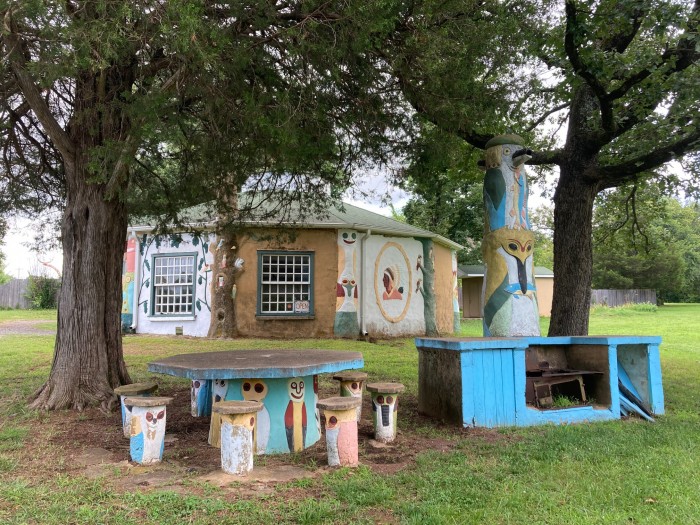 I’d never seen the Blue Whale before Sunday, so I’m happy to say that, despite the rain, we paid a visit! It’s not far out of the way between Foyil and home, so the opportunity was too good to pass up. 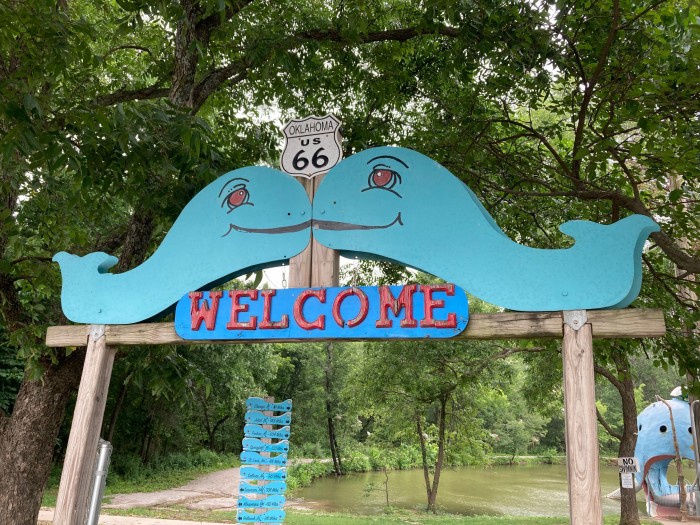 Like Ed Galloway’s Totem Poles, The Blue Whale is a made of hand-mixed cement and a metal frame. Travelok.com says, “The Blue Whale was originally built by Hugh S. Davis, a zoologist and family man who envisioned the whale as a special place where his grandchildren could play and swim in the nearby pond. His sketches of the mammal grew until they reached 20 feet tall and 80 feet long. With the help of a friend, Harold Thomas, the duo spent two years welding the metal framework and applying the hand-mixed cement, one five-gallon bucket at a time.” Here’s some more information about the history of The Blue Whale. I love that this was originally a surprise for Hugh’s wife on their 34th wedding anniversary. What a unique gift! And certainly surprising, I’m sure!

You can fish in the pond, but not swim. There are several picnic tables on-site, although the concessions area was closed when we were there. I don’t know what their hours are. However, if you’re feeling peckish, there was a sno cone shack in the parking lot. The on-site restrooms were a little buggy. Joss needed to use them but was put off by the bugs. But they’re there if you really need them. 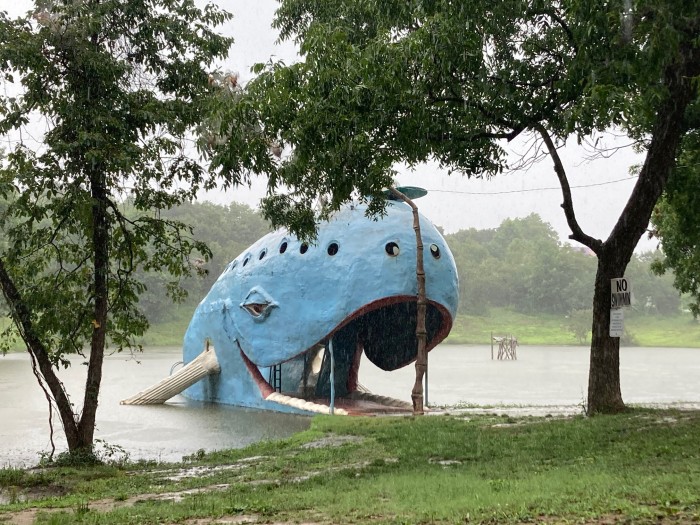 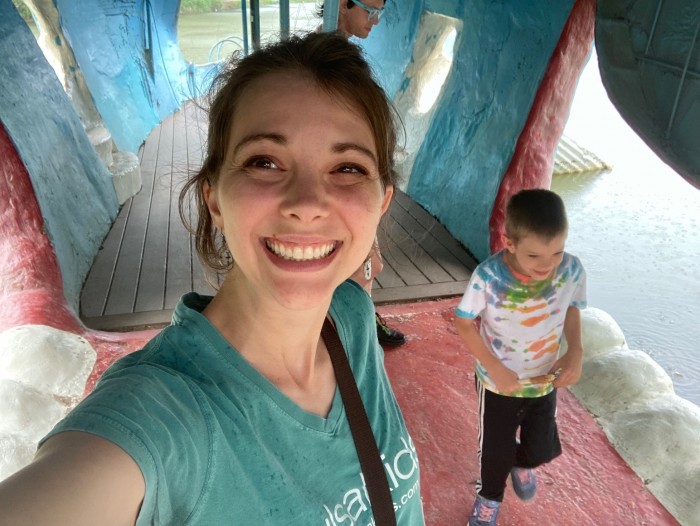 Again, unless you’re picnic-ing or fishing, a trip to The Blue Whale probably won’t take your whole afternoon. If we’d planned ahead, I would have tried to visit Totem Pole Park, followed by the Will Rogers Memorial Museum, and then The Blue Whale on the way home. 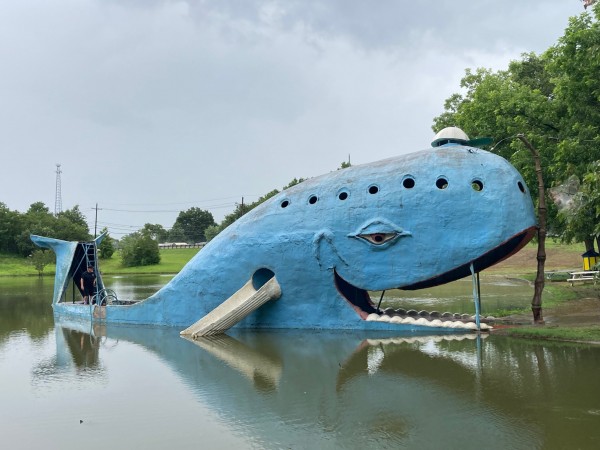 We saw several other families both at Ed Galloway’s Totem Pole Park and The Blue Whale. Doing some short, mini-Route 66 road trips is a great summer activity! For some more Route 66 ideas, check out this article I wrote for TulsaKids a couple years ago: https://www.tulsakids.com/route-66-road-trip-tips/. It covers Mother Road attractions from Miami, OK to Oklahoma City.  Do you have a favorite Route 66 attraction? What should we visit next? Let me know in the comments! 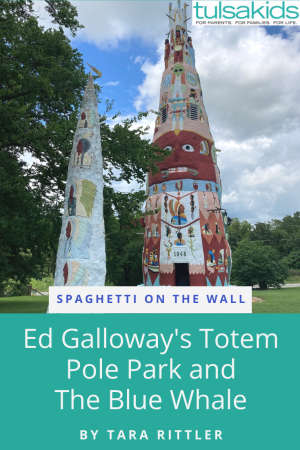