Down Syndrome and Up Syndrome:

Maybe she will be a journalist when she grows up, because Lily McKenzie is always asking “W questions” – those that start who, what, where, when and why. Lily is 6 years old. She loves sports. She’s outspoken, independent and what her mom calls “fiery.” She also has Down syndrome.

When Kalyn McKenzie and her husband James began their parenthood journey, things didn’t go as expected.

“I had gone to the doctor, and we discovered that I had a congenital birth defect that gave me an odd-shaped uterus, and was told our chances of conception were low and that carrying the baby would be even lower,” Kalyn says. “I got pregnant the next month. It was kind of ironic.”

When Kalyn was 16 weeks pregnant, she had a routine anatomy ultrasound and was told her baby had about five soft markers for Down syndrome, “a genetic disorder caused when abnormal cell division results in a an extra full or partial copy of chromosome 21,” according to Mayo Clinic. Kalyn and James declined the amniocentesis, a procedure where amniotic fluid is removed from the uterus for testing, which would have given them a definite answer.

Lily was born by emergency cesarean delivery and stayed in the NICU for 11 days. Kalyn remembers when a whole team of doctors filled their hospital room and gave the official news.

“I didn’t feel sad anymore, and I think it was because I could look at her and go, ‘She’s okay. I got what I wanted,’” Kalyn remembers.

Thankfully, Lily doesn’t have any major health issues, none of the ones that often accompany Down syndrome.

“I often kind of joke that all she has is Down syndrome,” Kalyn says. “The older that she’s getting, the more we’re noticing the difference between her and her peers. I call those my ‘down days’ when I get confronted with, ‘Oh yeah, I forgot. She has Down syndrome. Damn.’ But, it’s not an everyday thing. I mean, she’s just Lily to us.”

While Kalyn often forgets about Lily’s differences, she says one of the hard parts is watching her child realize she can’t always keep up with friends. Lily took her first steps around 18 months but didn’t take off walking until she was 2 1/2.

“That was the first milestone that she was so late on,” Kalyn remembers. “She saw all her little friends get up and walk off. There were a few defining moments where she would watch them walk away and sit there with her shoulders slumped.”

There are other challenging moments. Kalyn says it’s stressful to think too far into the future, and one of her greatest fears is that her daughter won’t have true friends. Then again, Lily’s Down syndrome has also brought the McKenzie family a beautiful perspective.

“One thing Lily has gifted us with is just the ability to be in the moment,” Kalyn explains. “That’s a real hard thing for me, or used to be. She lives in this moment, so to be with Lily is to be in that moment. It’s hard to explain the intense freedom that comes from just being in the moment. There’s no pressure in the moment. There’s no worry. You’re just with your kid. And I’ve learned to do that with my other kids – just be in their moments. It doesn’t take a special needs child to learn that, but I don’t know that I would have without her.”

Lily has two siblings: a 5-year-old brother Oz and a 3-year-old sister Faye. Kalyn says her kids are just now starting to realize Lily’s differences — that she has a lot of therapy appointments and she often comes home from her school, The Little Lighthouse, with gifts. The McKenzies recently sat down with Oz to talk about Down syndrome. He, in turn, wanted to explain it to his sister Faye.

“They don’t understand it entirely, but they know Lily needs extra help with things and extra time to do things, and that she doesn’t always understand what she’s supposed to do,” Kalyn says. “They’re real cute though. The other day Oz said, ‘Mom I feel sad that Lily has Down syndrome.’” Kalyn responded by saying, “Oh, okay, how come?” “I just wish she could have up syndrome like me,” Oz replied.

Kalyn says their family is at a crossroads. Although Oz is younger, he’s starting to surpass Lily in some ways and is becoming more of a big brother.

“Its an interesting dynamic shift,” she says. “Lily is very competitive. I’m pretty sure she decided to walk because her brother was about to walk, and she did not want him to be first.”

The McKenzies have told Oz and Faye it’s okay to get frustrated with their sister. It’s okay to not like the way she does certain things.

“I want them to be able to express their full range of emotions, because it’s not easy having a sibling with special needs,” she says. “It’s okay for them to say, ‘I hate Down syndrome.’”

As this story is written, Lily is preparing for a new transition, a new adventure as she starts kindergarten at Wright Elementary School. Then again, everything is an adventure, according to Kalyn.

“It’s kind of a strange thing, but I love that we’re on an adventure,” she says. “We will never have a boring life. We will never do things like everyone else. Lily teaches us things.”

A note to special needs families

Claudette L. Grinnell-Davis, Ph.D, is an assistant professor at the University of Oklahoma Anne and Henry Zarrow School of Social Work. She shares a few notes for families who have a family member with special needs:

Have open dialogue about the hard things, especially with kids.

“One of the most important things, especially when there are other children in the family, is to let your children know that it’s okay to talk about how sometimes you get frustrated. People feel guilty because they get frustrated with family members, especially family members who can’t help the way they’re acting. It’s important to be able to say, ‘This makes me sad. This makes me angry, and I need to have a safe place to talk about it.’”

Find space to just be you.

“I think one of the things that’s important is maintaining an identity or allowing yourself to have an identity that’s solely about you and not in relationship to your family member with a disability. One of the biggest pieces of balance is finding space to just be you.”

Be mindful of how stress is negotiated.

“A family is an organic living entity itself made up of components. When one component of the family needs a little bit more help or a little bit more support, the family negotiates stress and negotiates change as to minimize the amount of stress.” Grinnell-Davis mentioned that sometimes stress is shifted to a family member unduly or inappropriately.

Be a part of organizations that understand your family member’s special needs.

“It’s really important to be a part of those types of organizations, because they’re normalizing, they’re supportive, and they give you hope. They give inspiration.” 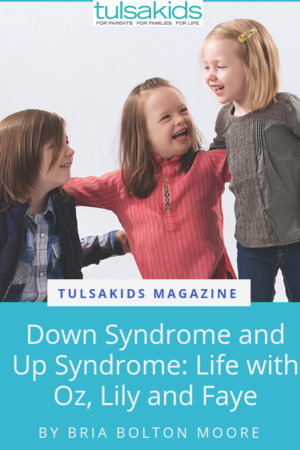