Last weekend, Joss and I paid a visit to Discovery Lab because they just opened not one, but THREE new exhibits! They’ve added a few new climbing elements to the Tape Tunnel room in the past several months, but all of these except for the original Tape Tunnel were moved to make room for the impressive “Circus! Science Under the Big Top” exhibit. 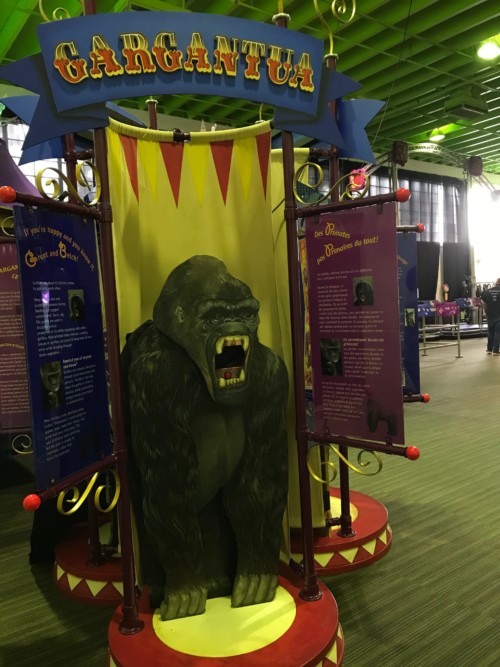 As you walk in, you are greeted by a life-size, 2-D gorilla that grunts and snarls when you press a button, and a larger-than-life clown. To the left is a tent set-up, housing the circus’s sideshow/so-called “freak show,” complete (of course) with explanations of the science behind their abilities. 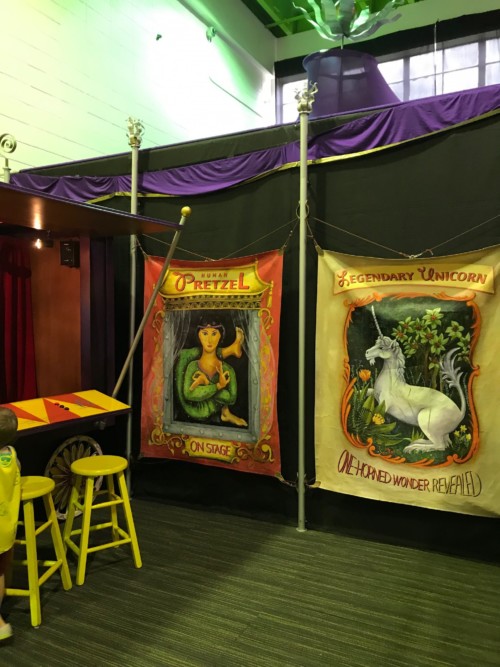 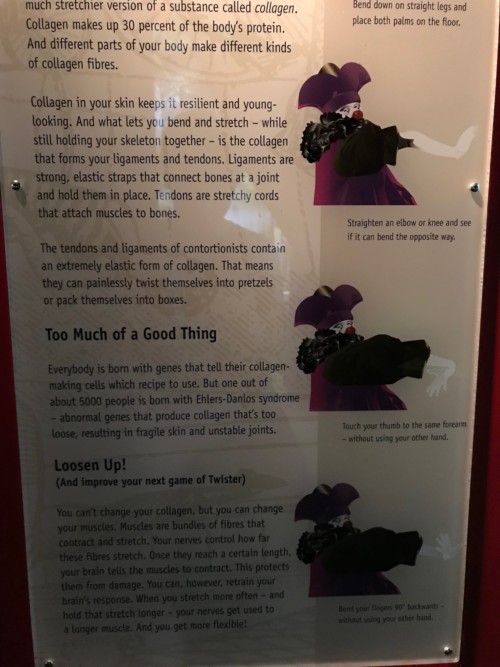 Under the tent, kids can play the part of a contortionist, seeing if they can fit inside a small box, try to bend a steel bar like a strong man, and get an X-ray view of a sword swallower at work. Plus, there’s a genuine unicorn skull! *wink* 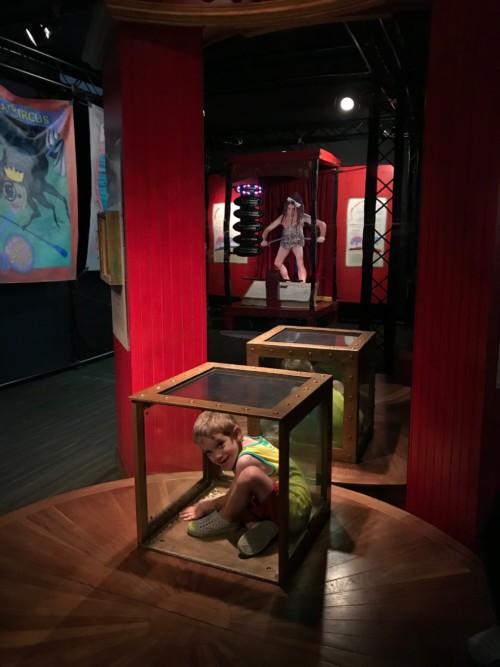 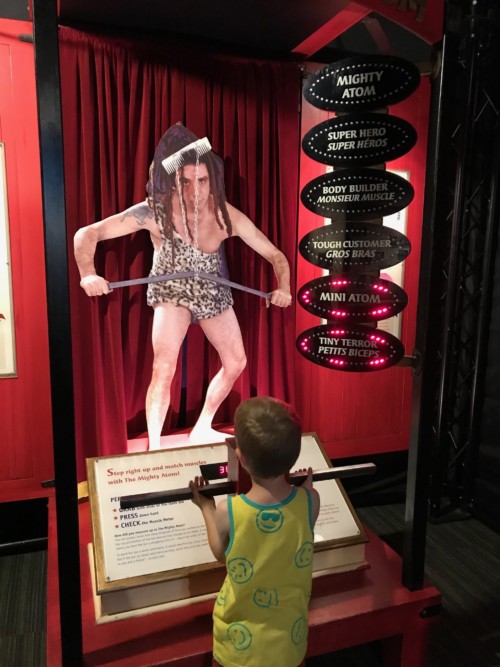 Outside of the tent, there’s a lot more to explore! Most impressively, a high wire where kids can get strapped into a harness and walk across the wire several feet above the ground. Sadly, Joss was too short for this activity, which is meant for slightly older kids. It looked like a lot of fun, though. There is also an acrobatics set-up, where kids can strap into a harness attached to a couple of long bungee cords, and turn flips in the air, etc. 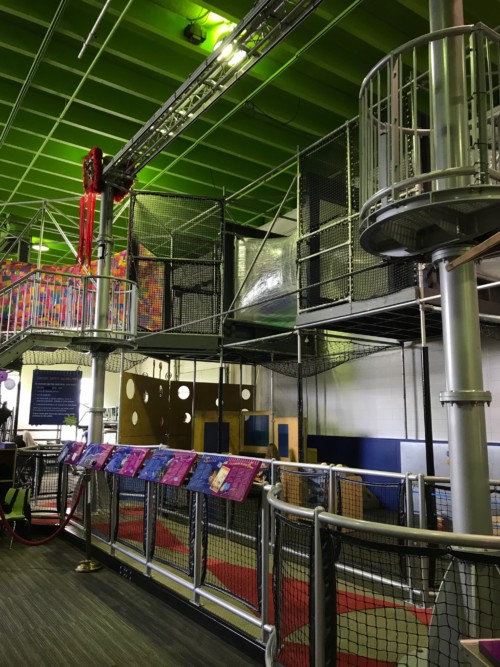 For kids who want to keep their feet on the ground, there is a less lofty balancing activity as well. 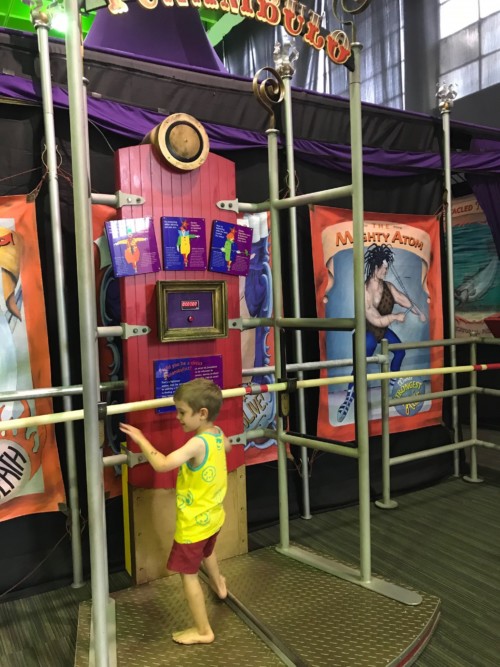 One corner of the room is a large dress-up area, complete with a stage, so kids can put on their own circus! There are animal costumes, clown costumes, ringmaster attire, etc. Joss was the fiercest, cutest little lion ever! 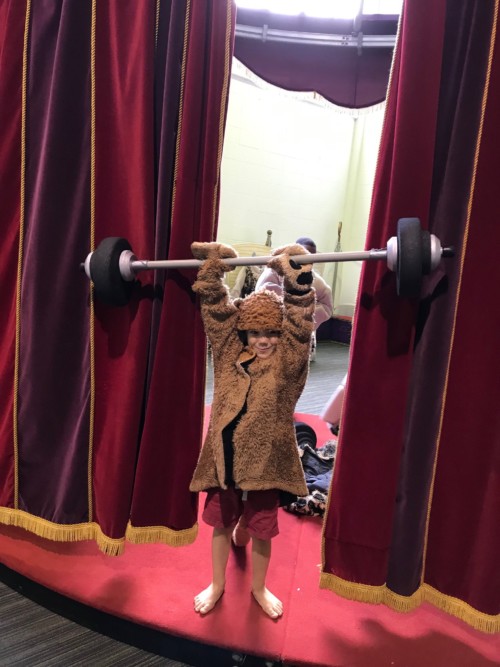 Another thing that greets you on walking in is animal poop! It’s fake, of course, but there are several different dung samples, with clues as to which circus animal made them. Turns out, I’m terrible at dung recognition–although the elephant poop was pretty easy to guess 🙂 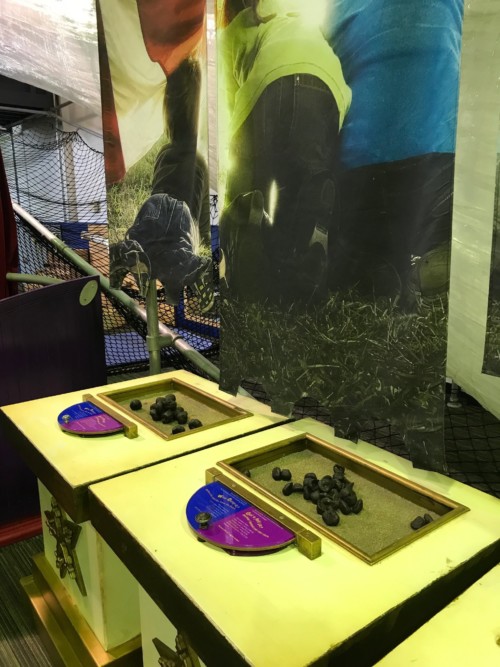 Another slightly gross-out element was the “name that smell” cart. Some of the smells were pleasant (buttery popcorn), but others (sweat)–not so much! 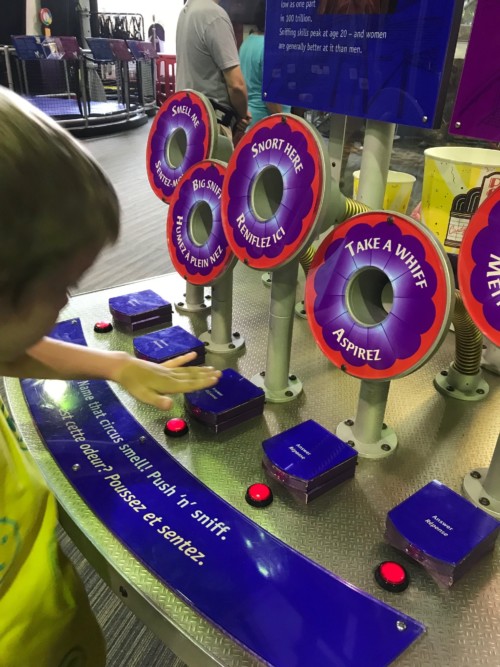 All in all, “Circus!” is probably my favorite Discovery Lab exhibit that we’ve been to in the past year. The sheer size of the exhibit and variety of activities/information is impressive, plus the circus theme is a lot of fun! 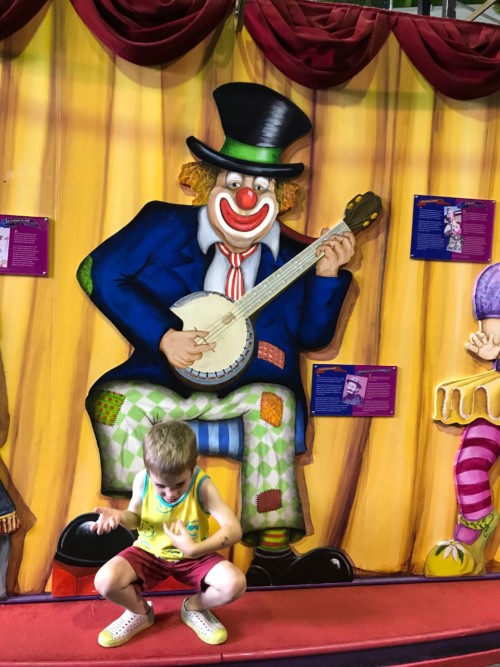 Of course, if you’re scared of clowns, you may want to give it a miss 🙂

We didn’t spend as much time in the other exhibit rooms, but the Featured Hall currently houses “Move It!” described on the Discovery Lab website as being “inspired by fun kinesthetic experiences and classic physics concepts that come together in ways that delight visitors of all ages.” 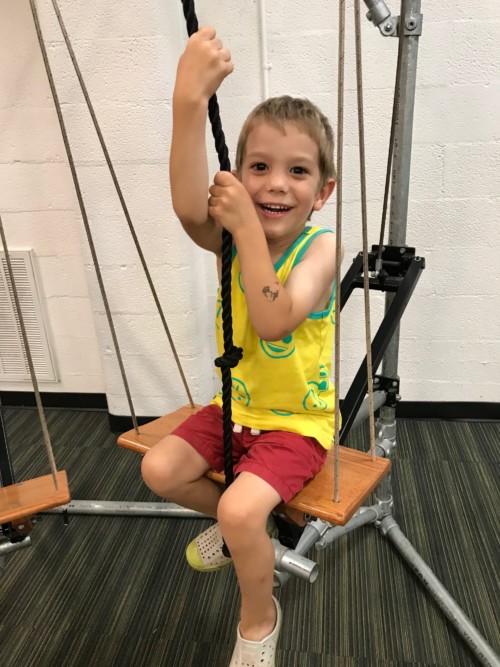 Inside the Workshop is a special exhibit called “Sun, Earth, Universe!” where kids can build their own model space station, making sure to equip it with all the necessities, then testing it to make sure it could withstand turbulence, etc. 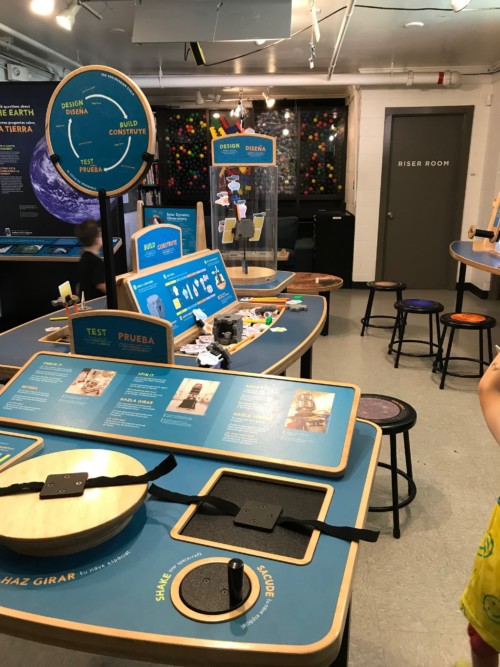 Another activity Joss really enjoyed was using colored blocks to represent Mars’ surface geography. I don’t know how much he understood the point of the activity, but matching the blocks to the numbers was a hit! 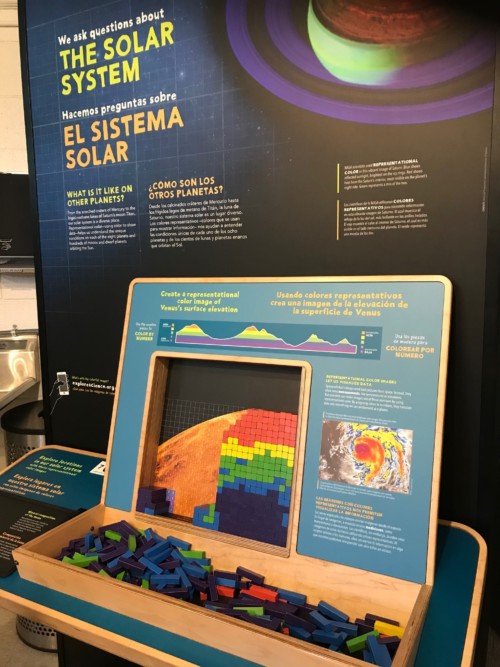 A Quick Word on Memberships

Writing this post convinced me to go ahead and renew our membership to Discovery Lab, which was set to expire October 1, haha.

Joss and I have the “Just for Two” membership, which covers 1 adult and 1 child for just $48–one of the cheaper memberships in the area, I believe! Additional kids can be added to any membership for $24 per child. Family Memberships, which cover 2 named adults and 2 named children, are $96.

This last perk, “Admission at participating ASTC Passport Program museums,” is something Joss and I have failed to take advantage of, but it’s definitely something to keep in mind if you get a Discovery Lab membership! ASTC stands for the Association of Science and Technology, so Passport Program participants include science museums and centers across the United States (see full list of participants here). There are also a few international participants.

So if you have a Discovery Lab membership and are planning a vacation, check to see if there’s a science museum on the list that you could visit for free!

Have you been to Discovery Lab’s “Circus” exhibit, or visited any of the other Passport Program participating museums? Which do you recommend? 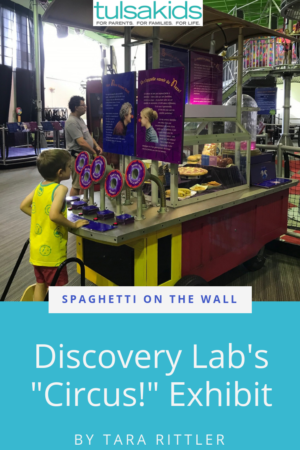