Carter’s preschool teacher was the first educator to notice that Carter was struggling to keep up with his peers. He was having trouble paying attention and was hyperactive. Carter’s parents, Bill and Kelly McCollough, co-owners of Landstar Homes in Tulsa, decided to keep Carter in the 3-year-old classroom at Metro Christian Academy for another year. Even so, Carter continued to lag behind – in comparison to other 4-year-old children, he was not meeting growth, behavioral or social maturation milestones.

From birth, Carter’s development worried Kelly. He was adopted and Kelly was aware that poor fetal growth had been an issue in utero, and Carter continued to be small for his age. Although Carter saw geneticists annually until he was 6 years old, the geneticists found no abnormal genetic-related condition.

Carter also had problems learning to eat solid food, Kelly said. “He would only eat a handful of food at a time and would start gagging as he was sensitive to food texture, tastes and smells. We saw a nutritionist and a gastroenterologist.”

Working alongside their pediatrician, Carter was evaluated for ADHD at age 4 and was diagnosed and treated at 5. ADHD medication was prescribed and new behavior modification techniques were employed at home. Kelly said these methods slightly improved Carter’s symptoms. “Honestly, we probably needed to increase the dose of medication, but he was experiencing side effects; he was having headaches.”

By the end of Carter’s second semester in kindergarten, his teacher noticed that while most of the kids had picked up on classroom routines, were able to begin and complete work in a timely fashion and exhibited self awareness, Carter was not able to do any of these things. “School was a struggle for him. We thought he would always struggle,” Kelly said.

A family friend whose child had experienced positive results from a program called Brain Balance recommended the couple try the program with Carter. Although skeptical, the couple enrolled Carter, and he started Brain Balance shortly after his kindergarten mid-year review.

Brain Balance was created by Dr. Robert Melillo, a chiropractic neurologist and researcher. In his book, Disconnected Kids, Dr. Melillo says the left and right hemispheres of the brain use electrical impulses to communicate. When these two sides do not mature at the same rate, these impulses get out of balance and interfere with communication, which is responsible for myriad behavioral, social and learning difficulties. Dr. Melillo’s Brain Balance techniques teach and strengthen the weak areas of the brain to catch up to the stronger areas, reconnect, and get back into normal, syncopated rhythm. 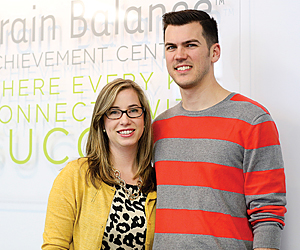 Kristen and Dr. Isaac Johnson, D.C., are co-owners of Brain Balance in Tulsa. Kristen explained that the Brain Balance program addresses any learning, social or behavioral developmental delays in children, including autism, ADHD, Aspergers, and dyslexia, with the exception of chromosome disorders, such as Down syndrome.

Before a child is admitted to the program, a two-day assessment is performed to determine if there are any developmental delays. This includes testing motor skills, timing and rhythm, and how visual and verbal and other sensory information are processed. Then the findings and whether or not Brain Balance can help the child are discussed with the parents.

The program entails three, one-hour sessions per week for 12 weeks. These sessions include a series of sensory, physical and academic exercises. The child is then placed on an in-home nutrition and exercise program, and any family-based environmental lifestyle influences are addressed. Kristen said changes may include limiting screen time, getting into healthy waking and sleeping routines or setting other expectations.

After starting the program, Kelly said the changes in Carter came slowly and were small, but together, the changes were significant. “At home there were less meltdowns,” she said. “You could actually talk to him to rationalize, and he would recover from a meltdown quicker instead of spiraling into more meltdowns.”

By the end of the year, Carter’s kindergarten teacher observed huge improvements in his ability to focus, to start work in a timely fashion, and to follow routines and verbal instructions.

“She teared up and said she had never seen anything like this,” Kelly said.

Carter’s parents decided to enroll him in a second session. “We really wanted to address his eating and to reinforce what he had already gained, and [to address] his impulsivity,” Kelly said, “for example, not getting in people’s personal space, hugging someone to tightly, spatial/personal boundaries.”

Carter, who is now in first grade, is off ADHD medication and is a straight-A student, reading one to two years above his grade level.

Kathy McCauley, a former practicing dietician who is a stay-at-home mom, said she knew she wanted to seek help from Brain Balance for her son, Connor, 10, when while driving she heard a commercial along the lines of: “Does your child dread or have trouble at his Christmas program? Is it painful for you as a parent to watch?”

Kathy said that when Connor was 4 years old, he ran off the stage at his Christmas program. And in kindergarten, he was wiggling, scratching and was terribly uncomfortable with that many people looking at him. It was as if it were painful for him.

Kristen explained that many times a public program such as a Christmas performance is one of the first experiences where parents really start to see their child struggling developmentally. “It’s very much in your face,” she said. “It’s just a visual reminder of where we are developmentally. There may be a handful of kids that were struggling a little, but Connor was sticking out.”

Kathy had some concerns earlier on, but said she was mostly in denial. As a 2-year-old, Connor didn’t begin speaking normally on his own. Kathy said she had to teach language to him; he didn’t seem to naturally acquire it.

Kathy and her husband, Dr. Colm McCauley, DO, family physician at Cushing Medical Specialists, sought help for their son at that time. Connor underwent pediatric developmental screening and testing. Later, at 3-and-a-half years old, he was diagnosed with sensory integration disorder. Connor was treated with occupational and speech therapy, which Kathy said did not help.

The McCauleys believed Connor possibly had Asperger’s syndrome, although he was highly functioning and did not meet all of the criteria for any diagnosis. Connor, who was very much in his own world, had trouble relating to others. Everything from learning others’ names, experiencing feelings for others, even using personal pronouns – she, I, we, me, your – had to be taught. 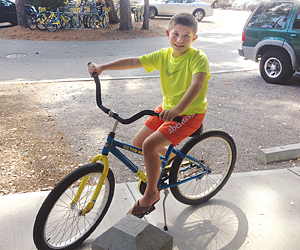 Connor also was extremely literal and did not engage in imaginary play. “At Halloween, he would not dress up. He is not Thomas, he’s Connor,” Kathy said. He was strongly drawn to only one interest at a time – he never wanted to talk about anything else or do anything else. “He could recite the name of every single Thomas [The Train] character, how to spell each of their names, and he knew every fact about trains. However, he would never make up stories or play creatively with them.”

By second grade, he was struggling in reading. He could read and comprehend a non-fiction book – and even recite all of the facts — without studying. But he could not understand the humor or the make-believe aspect of a fictional book. “When reading the Magic Tree House book, he would get stuck on the concept that Jack cannot take a tree house to other places and would really struggle to finish,” Kathy said.

However, memorization was second nature. In third grade, he was in the two-minute multiplication club within a couple of weeks – he could write the answer to 100 multiplication questions within two minutes – while most of his peers were in the five-minute club.

After the first meeting with Kristen at Brain Balance, Kathy was hopeful and excited that the Brain Balance approach could help Connor. “When they spoke to us, it spoke to me,” she said. “And it doesn’t matter what he has or doesn’t have, there is still something out there that can help my child.”

Kathy said the Brain Balance program was a commitment. She drove from Cushing to the center after school, one hour each way. She thought the four-week restrictive diet was difficult, but in the end it ensured that Connor got the foods his body needs.

This year, after the fourth-grade Christmas program and then after the church program, Kathy said her phone went crazy. Between both programs, Kathy said she received about 30 comments/texts/phone calls from teachers, church members and friends about Connor’s performance.

“He had such a good time,” Kathy said. “He sang all of the songs, he broke out into a borderline dance move, spoke loudly, clearly into the microphone, put himself into the role of the character, dressed up as the son of David. For the first time in his life, he was able to shine in this role. His kindergarten teacher sat on the front row and cried.”

Before Brain Balance, Connor only had two friends, which were made through association with close friends of the family. His social anxiety was so severe that instead of playing with kids, he would isolate himself. Since Brain Balance, “he has started to make friends rather than me doing it for him,” Kathy said, “because now he can reach out and find common interests and start conversations. He wants to be on the basketball team now.”

Regardless of the cause of the delay, the good news is that the brain can change. “The research used to say what you have at age 5, is what you’ve got,” Kristen said. “The latest research says the brain actually does change throughout your lifetime. We can employ environmental factors to positively influence how the brain is changing and growing. We expect an average of a two-year functional increase in clients over a three-month period.”

Kristen provided a couple examples of what may cause a developmental delay, such as one’s genetics. For example, very left-brained parents such as engineers, accountants, and so on, may have strong left-brained children. Another factor is technology, including too much television, video games, or any screen time, which stimulates the left hemisphere of the brain.

“The national average for screen use for kids is six hours per day,” she said. “In the first three years, the right brain should mainly be stimulated. Kids under age 3 should have no exposure to screen time. When you’re bored, the right brain has to find out what to do. The right brain has to look around and observe facial expressions, observe people in social settings. Being outside is right-brain stimulating.”

Kristen points to a clinical trial incorporating the Brain Balance program. Conducted in Tel Aviv, the results were published on the web-based “Frontiers in Pubic Health” journal in July 2013. This trial found that 81 percent of control participants who underwent this 12-week hemispheric specific intervention (the Brain Balance program) were considered to yield significant improvement of greater than two years in grade level in all domains except in math and displayed significant improvement in ADD/ADHD-related behaviors.

Mom Time: Discover Your Essential Self

Why I Love Tulsa!

Moms from the Tulsa metro tell why they love living in Tulsa.

Capturing the beauty of everyday life.