Deck the Halls with Owencorn

Our winter break was a whirlwind of cookies, cosplay, frozen pipes and plenty of family time.

I was going to write a deeply compelling intellectual discussion of how we can all evaluate our lives for casual ableism, but as I sat here at the keyboard for the past 45 minutes watching the cursor blink and occasionally typing and then deleting things, I realized my mind is numb from the overstimulation of two weeks of three children fighting over who gets to use what Lego bricks.

This was an important year for us because it was the first time our entire family has had the opportunity to experience an extended holiday break together. In fact, the 2.5 weeks we’ve been home together is a family record for any time of year.

As I rounded out my last work day, belly full of Panera bagels and various holiday pastries as is customary for educators, we started off with Dickensian expectations. First, I have to tell you guys, no one does Christmas like the administrative team at Union High School. I can’t say enough about how amazing they are to go out of their way to bring the holiday spirit to their faculty and staff. Every year, they decorate the main office with twinkling holiday lights and Buddy the Elf that place right on up with cute decorations then load it up with hot cocoa, coffee, and dozens of yummy treats. I am not ashamed to admit I spent the last two days before Christmas break eating purse fudge during class. Union is great to their employees, it’s true, but it’s the purse fudge that keeps me coming back every year.

One of our family’s holiday traditions is waiting until the last minute to buy holiday gifts due to work and financial constraints. If you think that sounds absolutely awful, you’re wrong. It’s twice as bad as that. After some savvy Facebook Market-ing and a physically and psychologically punishing series of trips to Wal-Mart in search of basically what amounted to a few clothing items and a watch battery, the shopping was done, the gifts haphazardly wrapped in whatever we could find to secure them (including washi tape, duct tape, and packing tape) and gingerly nestled ‘neath the tree.

It was time for our family’s grand holiday light tour, which coincidentally happened to take place on the night the temperature decided to dip down into the upper noughts. We carefully bundled up the children, wrapping their little faces in scarves and tucking beanies over their ears, arguing relentlessly until everyone acquiesced to wearing gloves and buttoning their coats. We scooched into the car seats and took off down the road. Justin put on the My Morning Jacket Christmas album…soundtrack perfection achieved. And then came the sound that every parent knows all too well, in three-part harmony, the cries of “Mom, I’m hungry!” 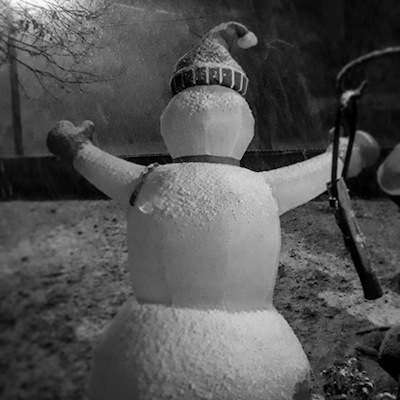 Who needs bucket lists when the weather is below freezing?

We hadn’t made it far through our McDinner when it was becoming slowly apparent that our kids weren’t currently up to the disciplinary challenge of sitting in a vehicle quietly looking at things. But because we are stubborn, we headed over to Rhema, where we were treated to twenty minutes of Lucy sobbing because we couldn’t get out of the car.

“Why can’t we walk around?”

“Because it’s 20 degrees outside and your brother spilled a glass of water all over my feet while you were fighting each other for the last french fry.”

Even as we vowed to try again, we knew we probably would not.

For the next few days, we were happy at home eating Owencorn (see below) and watching holiday movies. We introduced the kids to A Christmas Story and National Lampoon’s Christmas Vacation and even watched A Christmas Prince, which was every bit as ridiculous as you have probably imagined it is, and of course ⅘ of us loved it.

We spent Christmas day playing Uno with Justin’s fam and gorging ourselves on these incredible little cookies his very gifted mom makes. 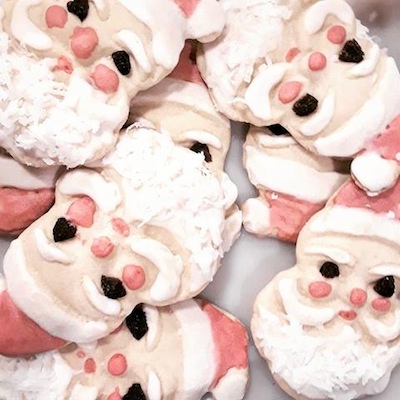 With the help of some amazing friends, our kids got some pretty cool Christmas gifts, including several Xbox games, which meant I got to spend the second week of Christmas break being lectured on my lack of hand-eye coordination by the boys. Laugh it up, kids, but when you get stuck in the next aperture chamber, you know you’re gonna come crying to Mama to get you through it.

As the temperature continued to drop, most of our house became pretty intolerable, so we holed up in the attic, which is where the grown-ups’ bedroom is, one kid snuggled on the sofa, another on a makeshift pallet, and the third in between us. We didn’t get a lot of adult alone time outside of Justin constantly annihilating me on Words with Friends, but it was fun to camp out as a fam right up until the pipes froze and we ended up going four days without showers. But if flushing the toilet by dumping a gallon of water down it doesn’t bring you closer as a family, I don’t know what will.

In the midst of the break, we ended up celebrating ten rotations around the sun for Noah at Incredible Pizza, which we all survived with no visible injuries or meltdowns. I realize it’s customary for parents to lament their children getting older, but I gotta say, I am really thrilled we’ve managed to make it through to double digits, and these kids are getting cooler and more fun to hang out with the older they get.

Somewhere at the top of week two, boredom gave way to creativity. Lucy developed a love of Five Nights at Freddy’s cosplay and began experimenting with it. I left for the store and when I came back, she had pretty competently transformed herself into Chica, which is apparently an animatronic chicken with a fondness for anthropomorphic cupcakes. Then we went on a YouTube bender and started creating all manner of weird stuff with felt and paint. 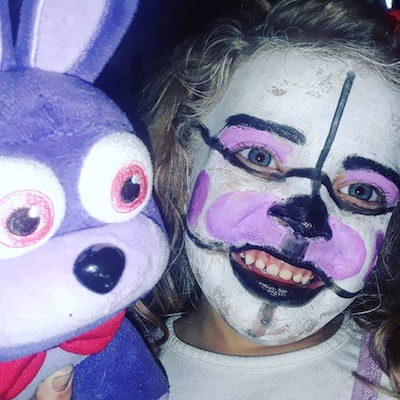 Super cool packages came in the mail from faraway friends; I read my new Star Trek book. The kids drew dozens of fan art pics, we watched the Doctor Who Christmas special, we played Monopoly, and Mom and Dad drank gallons of coffee. We ate all the cookies.

We celebrated New Year’s Eve singing karaoke (you guys should hear my rendition of Ursula’s “Poor Unfortunate Souls”) and playing YouTube trivia with friends (when it comes to naming that TV theme song, I stand as undefeated champion) then spent our final couple of break days binging Psych on Amazon and playing video games.

As I contemplate whether we’ll take our Christmas tree down by February 1st, I realize that we’re really probably not the holiday bucket list kind of family. But we are the kind of family where no matter what we’re doing, whether it’s Play-Dohing Pennywise the Clown noses onto each other or discussing whether transporters are actually suicide booths (they are), we all like to be in the same room together, and I think that says everything about us.

Here’s wishing you all a beautiful new year. 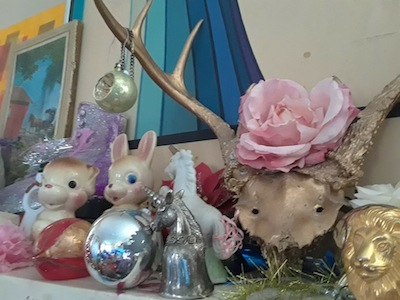 Throw some hearts on that tinsel, and it can last us till Valentine’s Day

Mix it up in the largest receptacle you can find and serve.