Lessons learned from Season One of My Little Pony: Friendship is Magic

Much to Daniel’s dismay, I’ve managed to get both Joss and myself hooked on “My Little Pony: Friendship is Magic,” although, to be honest, the only part Joss really cares about is when Pinkie Pie makes cupcakes with Apple Bloom. I think this has more to do with his love of cupcakes than his love of ponies, but Pinkie Pie’s cupcake song is pretty catchy, too…

Up until a couple weeks ago, all I knew about My Little Pony had to do with the controversial “Bronie” subculture, which I don’t want to get into here. But the show itself really is delightful, if you don’t mind a little squealing and lots of pink. I’ve been impressed by how relatable its lessons about friendship are; although it is a show geared toward young children, many of the situations the ponies find themselves in are quite likely situations that adults may find familiar. For example:

In this episode, Apple Jack tries to tackle the task of harvesting her family’s large apple orchard all by herself; furthermore, she has made several promises to help her friends with various things during the same time frame. Although Twilight Sparkle offers to help Apple Jack, she refuses the offer, too proud to admit that maybe she’s taken on more than she can handle. The lesson? Learn to say “no” and realize that you can’t always do everything by yourself.

“Call of the Cutie” marks the genesis of “The Cutie Mark Crusaders,” three young ponies who don’t yet have their cutie marks. (Cutie marks are the design on each Little Pony’s flank; they reflect each pony’s special talent, or “the thing that makes them unique.” Cutie marks appear when a pony recognizes and embraces their special talent, which, according to this episode, occurs generally within the same time frame for each pony–it’s basically an analogy for puberty.)

Apple Bloom is distressed when two of her classmates mock her for not having her cutie mark–especially because one of them is throwing a party to celebrate her new cutie mark. Apple Bloom fears that if she doesn’t get her cutie mark before the party, everypony will laugh at her! So she enlists the help of other ponies, trying everything she can think of (including hang-gliding, juggling, apple selling and of course cupcake-making) to discover a special talent and force her cutie mark to appear. Eventually, she ends up at the party–without her cutie mark–and as expected, the two classmates laugh at her in front of the other guests, saying she isn’t special. But then two other ponies (both without cutie marks themselves) stand up for her, announcing that not having a cutie mark doesn’t mean you’re not special, it means you’re full of potential. Apple Bloom may not know yet what her “super special talent” is, but that doesn’t mean she doesn’t have one. It’s just waiting to be discovered. Apple Bloom and the other two ponies become instant friends and form a secret club, “The Cutie Mark Crusaders,” vowing to help one another on the quest to discover their passions and earn their cutie marks.

While “Call of the Cutie” offers a nice lesson in being patient and not stressing out when you don’t know what you’re supposed to do with your life (a feeling I am all too familiar with!), “The Show Stoppers” has a moral that is even more compelling, I think. In this one, the Cutie Mark Crusaders further their quest by enrolling in a talent show, deciding to put on an amazing play.

While it is obvious to everyone else which production role each of the Crusaders should assume, the young ponies can’t seem to realize that, if they just slow down and think about it, their special talents are already manifesting themselves. Scootaloo rides a scooter like no one else; Sweetie Belle can compose music and has a beautiful voice; Apple Bloom is a genius at construction. But when dividing up the tasks of singer, set/costume designer and choreographer, Sweetie Belle announces that she wants to do costumes because that’s what her older sister is good at. Scootaloo wants to do lead vocals because they’re performing a rock ballad, and presumably, that’s where the glory lies. Apple Bloom knows she’s not much of a dancer but does like karate, so her dance moves are all kicks and punches. The show is a disaster, predictably, but they end up getting the award for “Best Comedy Act.” Sadly, the Cutie Mark Crusaders decide that their true talent must be comedy, meaning that they will have to keep waiting for their cutie marks a while longer.

One lesson here is that what you are good at and what you want to be good at may not always be the same thing; another is that you shouldn’t discount your passion just because it doesn’t seem “special” enough. It may be such an integral part of who you are that you just can’t recognize it.

Season One, Episode 14: “Suited for Success”

This may be my favorite episode because it reminds me so much of things I’ve heard people in the retail industry remark on. In “Suited for Success,” fashionista and seamstress-extraordinaire Rarity offers to make her friends gowns for an upcoming gala. She puts a lot of thought into each dress, choosing fabrics and designs that reflect each pony’s unique personality. But when her friends see the dresses, they are not impressed. Because Rarity wants to make her friends happy, she promises to remake the dresses to their exact specifications. The results are disastrous. The ponies show off their new dresses at a fashion show–complete with a celebrity guest designer–and Rarity is humiliated, certain her career is ruined. The ponies realize that Rarity is an expert and a professional and that they should have trusted her judgment and been grateful instead of hateful when she showed them her original designs.

Rarity’s song “The Art of the Dress” perfectly portrays the difference between taking joy in your skill and being overwhelmed by trying to please too many people. My favorite lines are sung by Rarity’s friends: “All we ever want is indecision/all we really like is what we know/gotta balance style with adherence/making sure we make a good appearance/even if you simply have to fudge it/make sure that it stays within our budget.” As someone who has heard professionals threaten to pull their hair out over customers who expect top-quality work but don’t want to pay for it, whether those lines are pure poetry or not, they ring true.

Anyway, our newfound love of My Little Pony seemed like the perfect excuse to make cupcakes, so Joss and I made a batch of strawberry cupcakes with strawberry frosting last Sunday. We colored part of them olive green, in honor of Apple Bloom’s crunchy charcoal cupcakes. We just used a box mix and jar of frosting, so I don’t have a recipe to share, but this was still a fun way to integrate something we’d watched on Netflix into our daily lives. 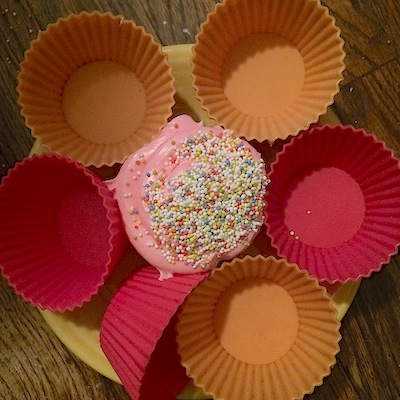 Joss already knows that, when it comes to food photography, you must accessorize. 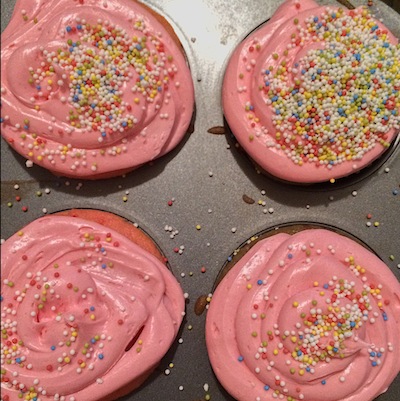 Joss’s job when it comes to cupcakes is 1) stirring 2) setting down the cupcake liners and 3) sprinkles! Although once he gets started sprinkling one cupcake, he finds it hard to move on to the next (see top right)…He is nothing if not thorough. 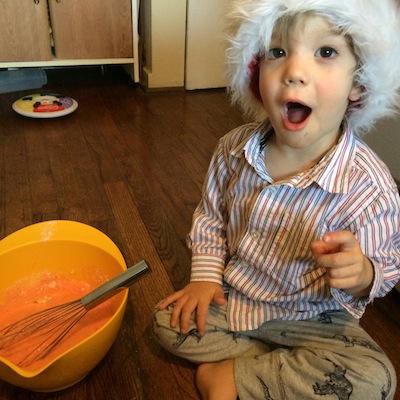