Surprise! It’s been a busy month here. I’m fairly sure you can all relate!! Adding to the stress of the holiday season was doing school tours, thinking too hard about what order to rank my top five choices for Joss’s schooling next year, and getting his TPS application turned in. (I hit that “submit” button last week and couldn’t be more relieved!)

I only toured four schools–Zarrow, Eisenhower, Mayo and Eliot–and I talked to one mother on a tour who had a total of eight scheduled, so I guess I didn’t go overboard. But when each tour requires you to leave the office in the middle of the day–it just feels like a lot!

Overall, it was nice to get to see some of Tulsa’s elementary schools and get a feel for the different environment they each offer. And I know we are super privileged in that all five of our options (including our neighborhood school) are pretty solid schools. I’ll be happy no matter where he ends up. It’s just nice to have it all in the hands of the lottery gods at this point.

Side Note About TPS Enrollment

BTW, I wrote a blog post about applying to magnet programs a couple months ago, right before TPS announced their new enrollment process. Oops. If you’re not aware, learn more about the new process here. Registration is open for the 2020-2021 school year and will close January 31.

Besides the streamlined enrollment period (enrollment dates are the same for al schools), you can now choose up to six elementary school options, ranked in order of preference. Just be aware that the magnet schools still require proof that you’ve toured, so get in touch with the school you’re interested in about upcoming tour dates ASAP!

What We’ve Been Up To

Now that I’ve got that enrollment stuff taken care of, I just want to take some time to reflect on some of the more enjoyable activities we’ve been up to this month.

I wrote an entire blog post about this last year so not going to duplicate that. However, Joss and I did return to Philbrook Festival this year–on opening night. It was raining. Just like last year. (How do I keep picking the worst possible night?!) 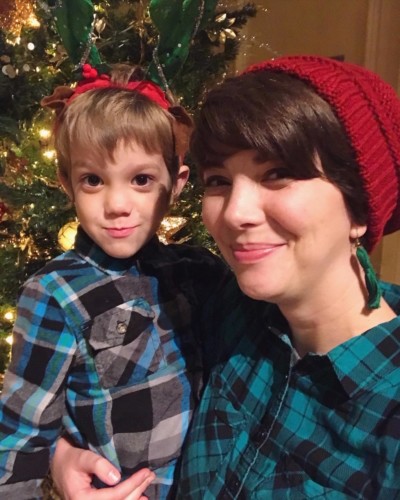 But again, just like last year, even though we missed out on visiting Santa in his Cabin (on rainy nights, he moves into the main Philbrook building) and taking a train ride around the grounds, the evening was pure magic. 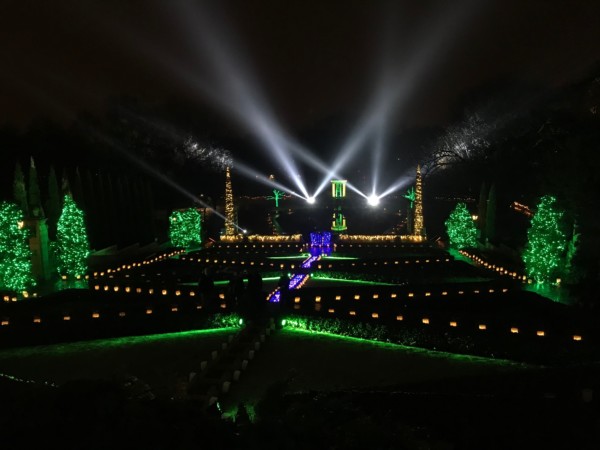 Even better, if you’re a Philbrook member, Festival tickets cost just $5 for adults–and, as always, kids 17 and under get in free. So it’s a very affordable evening! (Certain activities, like the train rides, cost extra. But it’s fun enough just watching the light shows and enjoying the decorations that you could have a wonderful time without those extras.)

We missed Cascia Hall’s annual Christmas Walk (featuring a home tour and boutique), but Joss and I did take an after-school trip to Cascia’s all-new Old-Fashioned Christmas Tree Lot + Santa’s Village! We happened to go on the evening of their Chili Cook-Off, and this may just have to be an annual tradition. 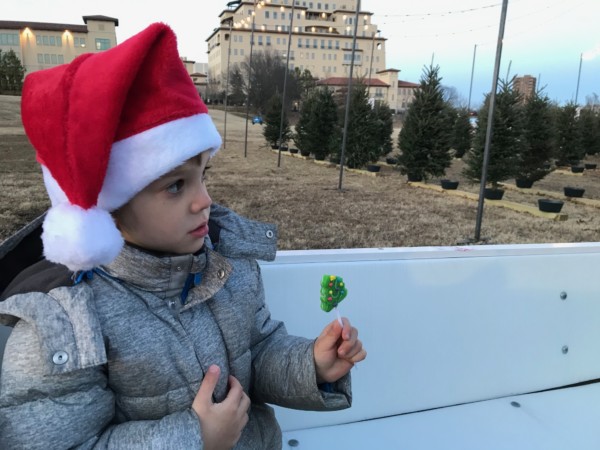 Yes, even though we missed the Philbrook Christmas train, Joss has ridden 3 other Christmas trains this year, so it’s not like we completely missed out!

For a mere $5, we got to sample as many types of chili as we wanted, plus there were fun activities for kids, like train rides, a Frozen 2 Bounce House (quite the hit with Joss!), and more. They also had live music, s’mores kits available for an additional $5, seating around two fire pits (complete with cozy blankets!), and everyone was so nice. They let Joss get in for free, so we shared our chili samples, which were all delicious. We tried brisket chili, chili over spaghetti noodles, chili verde served with quesadillas, etc. Yum…..

I really love choosing Christmas gifts! So may have gone a bit overboard this year. I’ve even purchased and wrapped a couple gifts for myself, ha. For example: 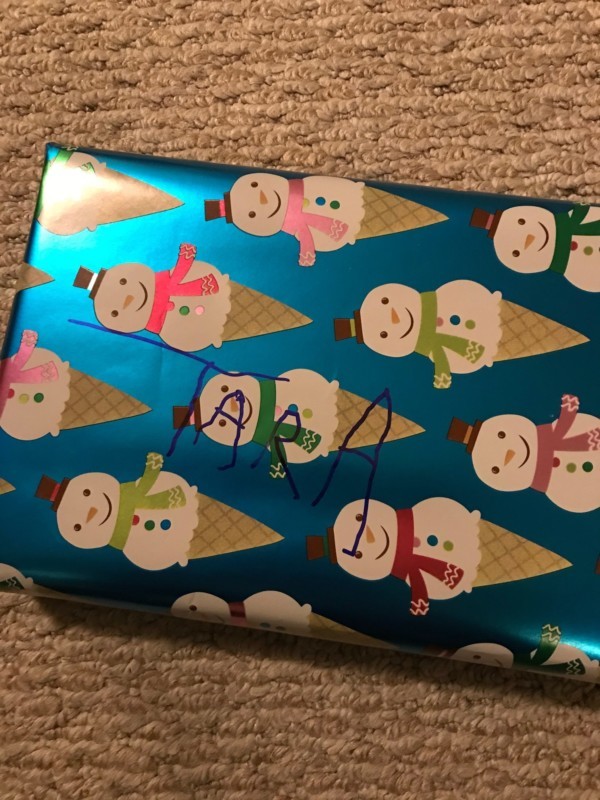 This is a copy of Tomi Adeyemi‘s “Children of Virtue and Vengeance,” the much-anticipated sequel to “Children of Blood and Bone.” Joss and I went to a pop-up shop for Fulton St. Books & Coffee at Mother Road Market, and they had such a wonderful selection of books! I couldn’t resist buying something for both of us.

But beyond slyly giving you a suggestion for your own Christmas Wish List, I wanted to share this photo because JOSS WROTE MY NAME ON THE PACKAGE! He’s been helping me wrap gifts this year by writing everyone’s names, and I’m so proud and astonished! He hardly needs any prompting for remembering how to write the letters, either. Last year, he could write his name. This year, he can write just about anything! 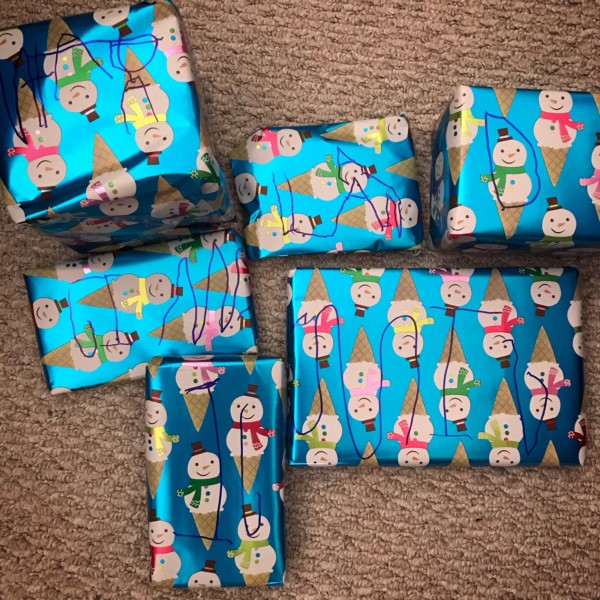 Also, I will definitely be writing a blog post about Fulton St. once they open, hopefully in a few months, in Brady Heights. I have a history with their future location and could not be more excited for this new business! Give them a follow on Facebook to stay updated on their progress. 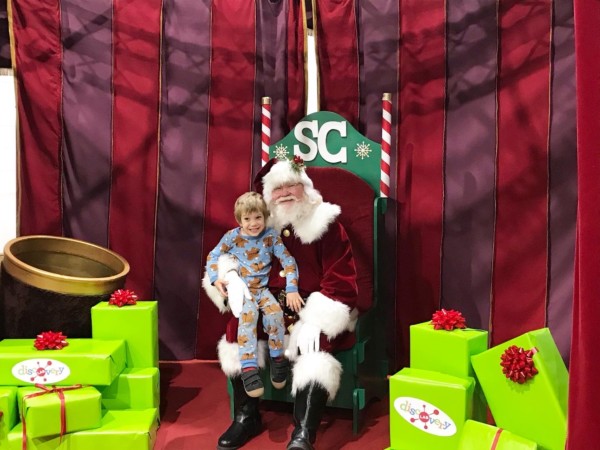 For our family, a Discovery Lab membership is probably the best deal in town. Their “Just for Two” membership is $48…and with tickets at $8 each (ages 2+), as long as you visit the museum at least 3 times throughout the year, you’ve gotten a good deal. Plus, they have special Members Only events like new exhibit previews and (as you can guess from the heading above) Cookies and Science with Santa! 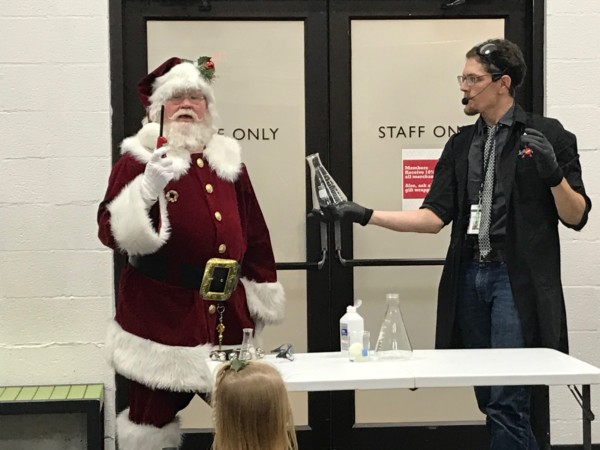 Joss’s favorite part was picking his cookie(s) and making paper ornaments. My favorite part was watching Santa play with fire, which was hilarious. They were doing the egg-in-a-bottle experiment to demonstrate how it is possible for Santa to get down a chimney.

Oh, my other favorite part was that Joss informed me that he asked Santa for a “Skin Sharpener” for Christmas. Apparently, this is a device that “sharpens your skin so you can stick your hand inside your body.” Um…what?!

This was a first for Joss, and a second for me. If I remember correctly, the only other Tulsa Christmas Parade I’ve attended was several years ago when it was still held in the evening. All I remember is being cold. Very cold. Cold enough that apparently I wasn’t in a hurry to go back.

But this year, Joss and I won two VIP tickets to the parade! The parade had a sweet little Who-ville set up at Tulsa Pop Culture Expo along with a Grinch photo op that doubled as an opportunity to win VIP tickets. Joss loves the Grinch anyway, so I figured, why not? All you had to do to enter was follow the Tulsa Christmas Parade on Instagram and Facebook and use the hashtag #tulsachristmasparade2019. 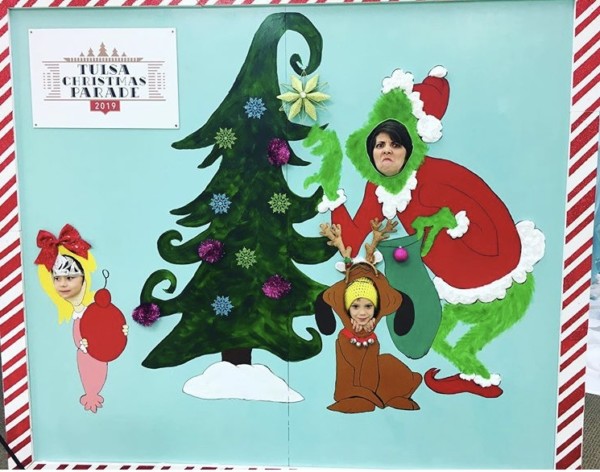 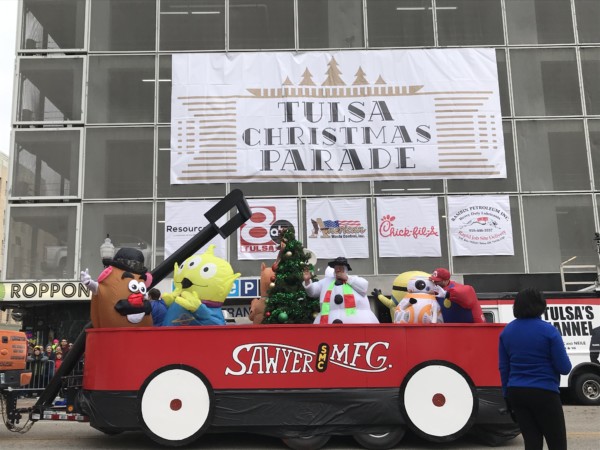 VIP tickets to the parade are fantastic. You get special seating right next to the primary announcer station, but even better, there is free food and hot chocolate! The only downside is that we had to be in our seats 30 minutes before the parade started, which gave Joss 30 minutes to beg me to take him across the street to Roppongi for some shrimp ramen. So our parade watching got off to a rough start…and to be honest, his attitude didn’t improve much from there. 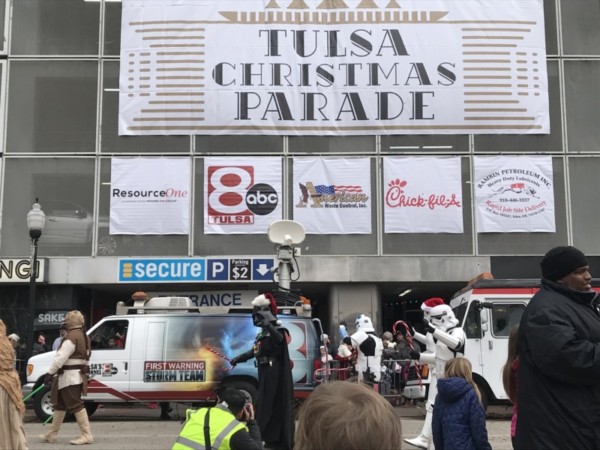 This year, to my understanding, Tulsa Pop! Kids played a big role in helping plan the parade, which was a fantastic partnership. They had groups of superheroes and Star Wars characters walking in the parade (complete with a giant Chewbacca!), Jurassic Park vehicles, etc. And the superheroes stayed for the Block Party at Chapman Green after the parade, handing out comic books. Joss got a Spider-Man comic from his favorite Spider-Man, and this was by far the biggest smile of the day: 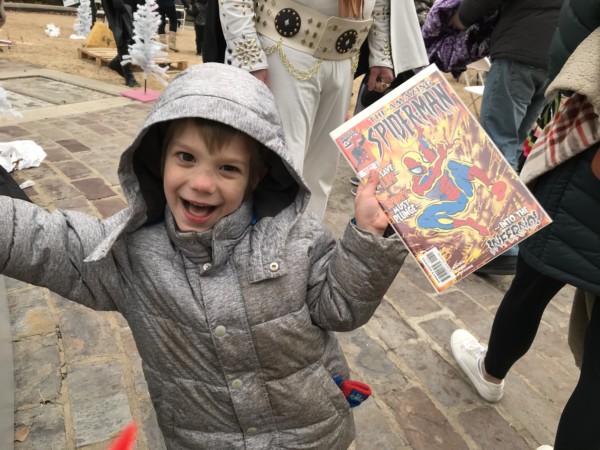 So that’s it! Now I’m just counting down the days to Christmas. This week should be a lot calmer, as far as scheduled activities go–and after that, a few days of vacation! Cannot wait.

One final note: If you’re looking for a good gingerbread cookie recipe, we made these Sunday evening. Make sure you leave enough time for the dough to chill a few hours. But it’s a pretty easy and tasty recipe! 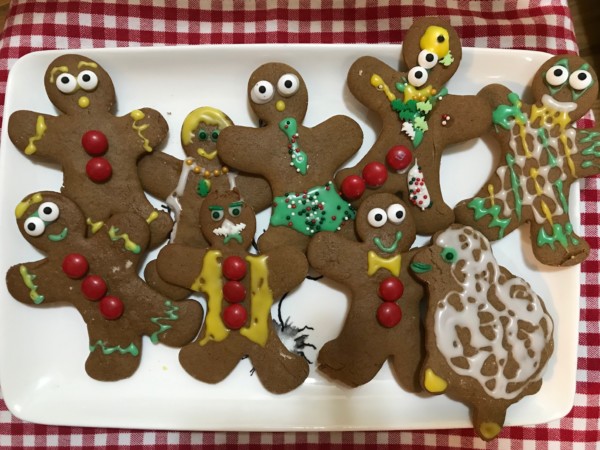 See if you can spot the one Joss decorated! 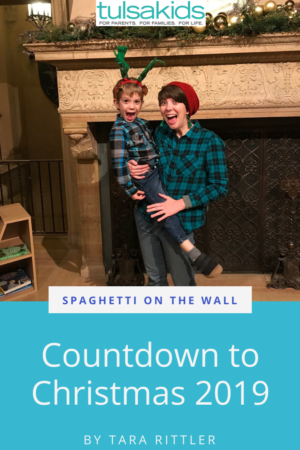