The Next Big Fight:

Concerns about the future of public education in Oklahoma

As a former teacher and a middle school dad, I’m very concerned about the future of public education in Oklahoma. As a state legislator, I’m worried about the direction in which we seem to be heading. We just finished rounds of interim studies in which we brought in experts to testify on issues of interest to the state Legislature. Many of them were convened in the Common Education committee. We looked at a bunch of problems we face – assessment challenges, the need for good professional development models and the massive teacher shortage. Some of my colleagues bridled at what they were hearing. After all, didn’t we just vote for big teacher raises? Why are education experts complaining? Some of them would say things like “Education spending is at record levels. Why aren’t districts using the money we gave them to do better?”

Those questions should concern us all and are worth addressing. As a history teacher, I’ll begin by pointing out that while we did increase salaries for teachers in 2018 and 2019, this followed a decade of flat salaries. Other states also raised salaries, and in this competitive job market we have to keep moving to keep up if we want people to consider teaching as a career. By the same token, record spending after a decade of drought brought us closer to where we need to be, but hardly means we solved the education crisis.

I’m not saying money is the only issue. But if we’re going to talk about the money we spend on education, we should do it honestly. After all, your school district is not sitting on a pile of cash. Most of the new money they received from the state went to salaries, and only for teachers. Support staff continue to receive shamefully poor salaries. And the pandemic has placed all kinds of new strain on our public schools. I’m hearing from teachers in the field, and even from administrators, about how tired and strapped everyone is.

Which brings us to the next big fight in public education. Public school critics are using the pandemic to tee up the next education reform agenda: privatization. If public schools are not giving us the results we want, why not use vouchers to move kids and public education dollars to private schools?

Now, full disclosure: I attended excellent private schools. Generous scholarships allowed this eighth of nine children raised by a single mom to afford the best education. That’s one of the reasons I entered teaching – I felt I needed to give something back. There will always be a place for private schools in America. But we should be careful about distorting the private school market with massive public subsidies. Right now people are demanding an audit of Tulsa Public Schools, something that already happens annually. Do you think we’ll be able to audit a private school even if it receives hundreds of thousands of public dollars? Oklahoma guarantees a right to a public education, but we have private schools in this city that expel students – even very young students – on the basis of their sexual orientation. Should they be eligible for public tuition dollars?

We’ll find out in the next legislative session. I remember back in 2018 when parents and students rallied behind teachers as they marched on the Capitol. The feeling of support, or mattering to the communities they served, buoyed teachers up in a tough period. Since then, we’ve seen our leaders return to the old rhetoric bashing public schools. I wonder sometimes how much this has to do with the lobbyists who would benefit from privatization. In any event, it’s a shame to see our public schools under so much pressure, and our teaching corps feeling so low. That’s something I’ll be taking up when I head back into the fight next February. 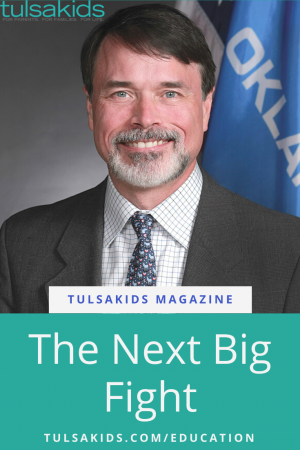