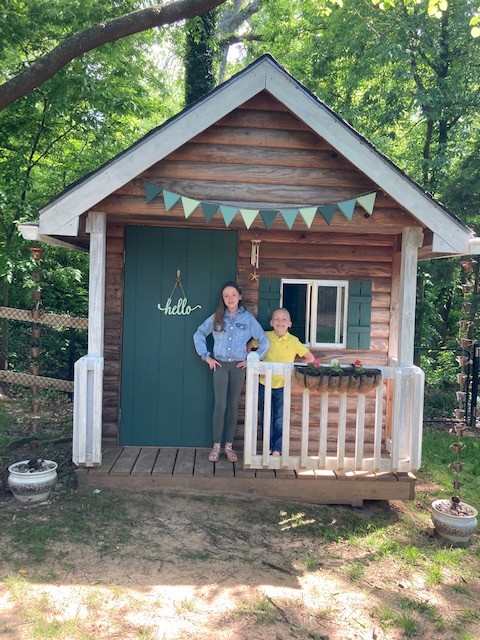 When Caryn Arnold put an offer on her house, it was with one condition.

She and her husband asked it be written into the contract that the old gardening shed in the backyard would stay.

She laughs thinking about it now.

“I’m sure they were thinking, ‘No problem,’” she said.

The shed was covered in dirt, filled with cobwebs and the inside hadn’t been cleaned in years. 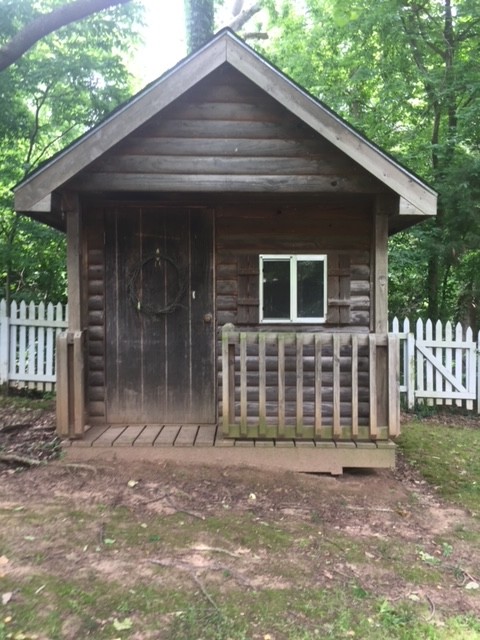 But Caryn had a vision. She saw past all of that to a playhouse for her kids, 10-year-old Vivi and 7-year-old Jack. She saw a fun place for their imaginations to soar, for making mudpies and for inviting friends to play.

Making that vision come to life was another thing. In between work, after-school activities and making improvements to their home, there was little time left to work on a kids’ playhouse.

It was in the spring of 2020, when Caryn suddenly found herself with more time on her hands, that she could begin tackling the shed. Step one was power washing the 7-foot-by-10-foot shed and porch.

“I thought I would just power wash, paint and be done with it,” Caryn said.

But after years’ worth of grime and mud were washed away, it revealed a beautiful red cedar. That’s when Caryn’s vision went to the next level. All of a sudden this old garden shed had charm and personality.

Caryn decided to make a Facebook poll among her friends, asking them to choose a color for the playhouse door.

“Everyone had a different opinion, and everybody got really involved,” she said.

Some thought she needed a bright color – like turquoise – that popped. Others thought a warm forest green fit the woodsy, log-cabin feel. She ended up with a pretty shade of juniper blue. And with that, friends and family became interested in the step-by-step process of the renovation, which she documented online. 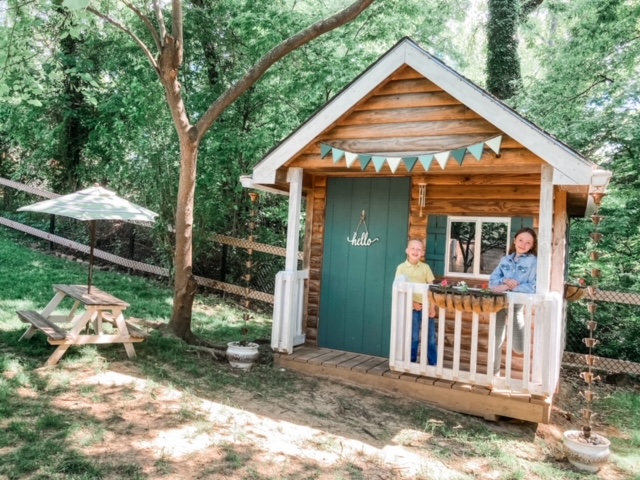 From there, she began cleaning the inside, pulling out old birds’ nests, dusting hundreds of cobwebs and pulling up the carpet from the floor.

The old garden shed became an If You Give a Mouse a Cookie project, with one thing leading to another and another.

Caryn scanned Pinterest for ideas and added peel-and-stick vinyl floor tiles, then added window boxes and guttering. Her husband, Frank, used scrap wood to create a bunting flag in shades of green and blue. The flag hangs above the doorframe.

One of her favorite additions are rain chains – an attractive way to pull water flow from the roof to a basin. This project took some time, as Caryn and Frank had to watch This Old House videos to learn how to dig a hole and then add stone to redirect the water flow toward a creek behind their home. The result is both functional and whimsical, and every time it rains, water trickles down through the chains – little metal gardening cans – that frame the sides of the playhouse. 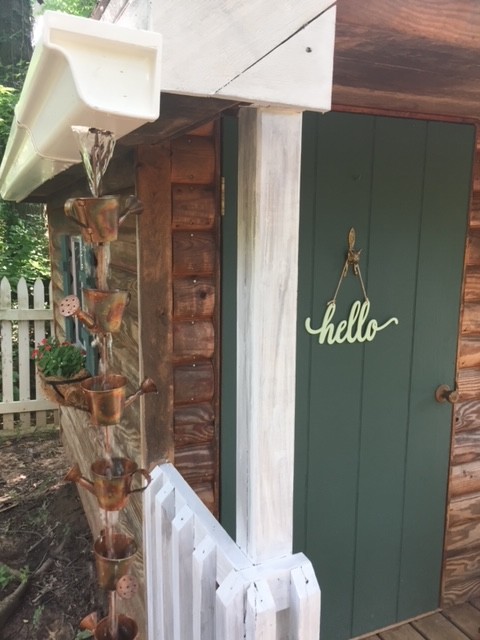 The rain chains are reflective of Caryn’s perspective in designing the playhouse.

“It has to be cute,” she says emphatically. “But I want it to be functional, too.”

When it came to the inside, Caryn didn’t add much besides a large chalkboard and chairs. Frank created a small bar top so the kids would have a place to sit, eat and play. 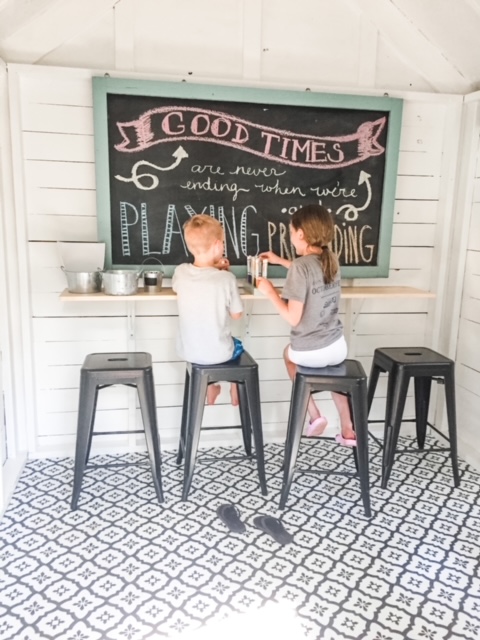 Playing store and restaurant are the kids’ favorite things to do in the playhouse. They take orders at the window, make pretend food and then slide it back to their “customers.” She also added a red rotary phone and phone book (both relics she had to explain to her kids), plus art supplies.

Caryn, who is an elementary school teacher, said she knew the playhouse would be an opening for hours of free play for her kids. 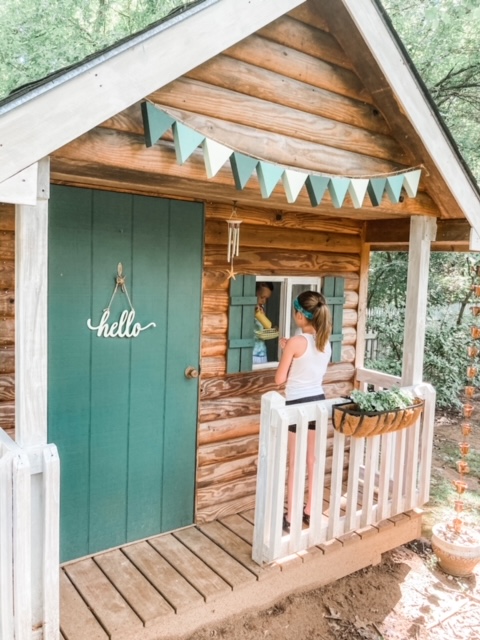 “I’m big on imaginative play. You don’t have to have a playdate in order to play,” she said. “I tell my kids all the time, ‘I’m giving you the gift of boredom.’”

And while that sentiment is sometimes met with an eye roll, Caryn says they often end up finding something to do or making up a game, so long as she allows the space and time for it to happen.

As for the playhouse, it has become as beloved to her as it has to the children. Working on it became an outlet – for creativity and for quiet time for herself. She has documented the process on her Instagram page (@18dollstreet).

Caryn’s shed to playhouse transformation caught the eye of the editors at HGTV Magazine, where she is featured in the September issue. 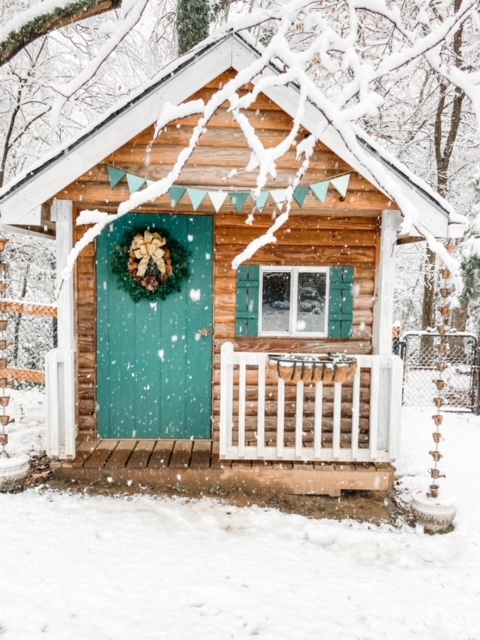 5 Tips for Turning a Backyard Shed into a Kids’ Playhouse 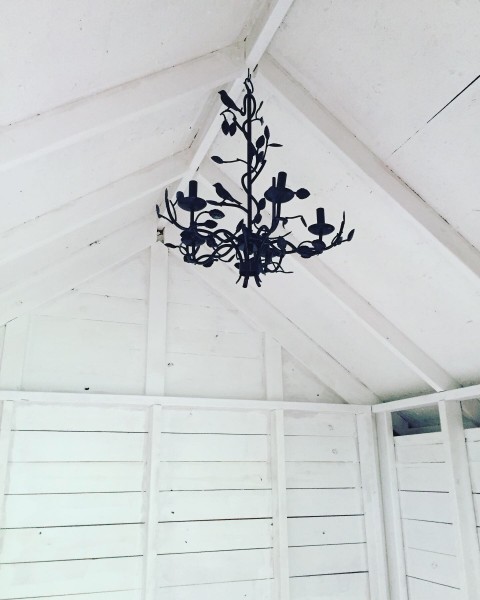 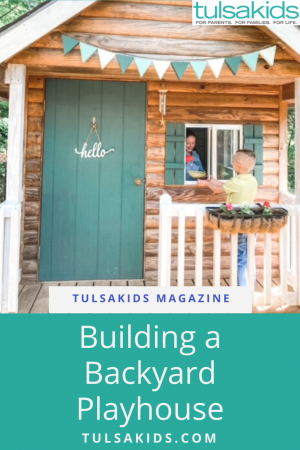