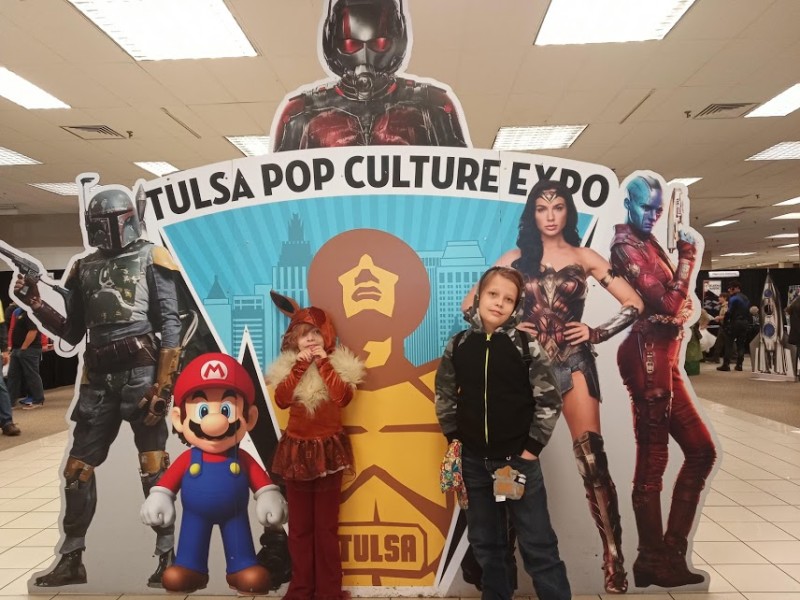 There are many things to love about Tulsa Pop Culture Expo, not the least of which is that it’s the kid-friendliest local convention. Between the Coffee Nebula famdom and Tara and Joss of Spaghetti on the Wall, TulsaKids was represented as heck at this con. On Coffee Nebula, we share a lot about taking tweens to pop culture events, but Tulsa Pop is a great place to dip your toes in the convention waters if you’ve got littler kiddos. To get a feel for what it’s like with young Padawans, read all about the Spaghettios’ T-Pop adventures here. 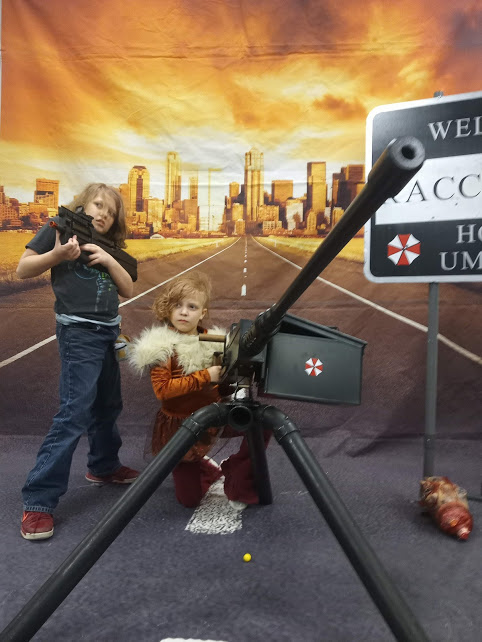 Here are just a few ways this convention is accessible to families:

For families with neurologically diverse sensory needs like ours, having a quiet space to retreat to can be a gamechanger. Soaring on Hope, a pediatric therapy and autism center, provided this dedicated space located in the kids’ area was set apart and filled with comfy seating, pillows, and tactile sensory toys. Here’s a fantastic clip of the room from YouTuber Life With Steph Beth, who was a panelist at Tulsa Pop Culture Expo. She’s fantastic, so don’t forget to give her a sub! 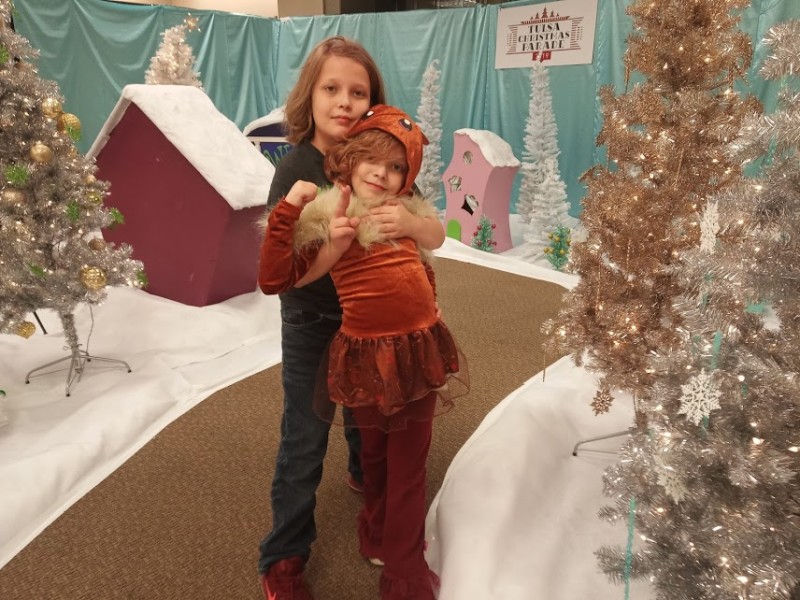 There are always loads of cosplayers at conventions, and they’re usually more than happy to stop for a pose with a kiddo. But Tulsa Pop stands out for its amazing backdrops and scenes. Christmas scenes in Whoville, a Borg alcove, in front of Toothless the dragon, and inside a tiny TARDIS were just a few of the places I forced my children to pose again, and again, and again.

Tulsa Pop has the most space expressly devoted to kids with arts and crafts, space to play, and a little reading area. Here, Lucy took great pleasure in creating her own Forky, the terrifying spork creature from Toy Story 4 that children inexplicably fawn over. Clary Sage also generously offered free face painting for the second year in a row and did such a good job I told them they should start an Instagram channel doing cosplay makeup. Clary Sage friends, @coffeenebulakristi will be your first subscriber, and you can totally use the Nebulite kids as models! Just look at this amazing face paint inspired by one of Arthur’s favorite animes, Bleach. 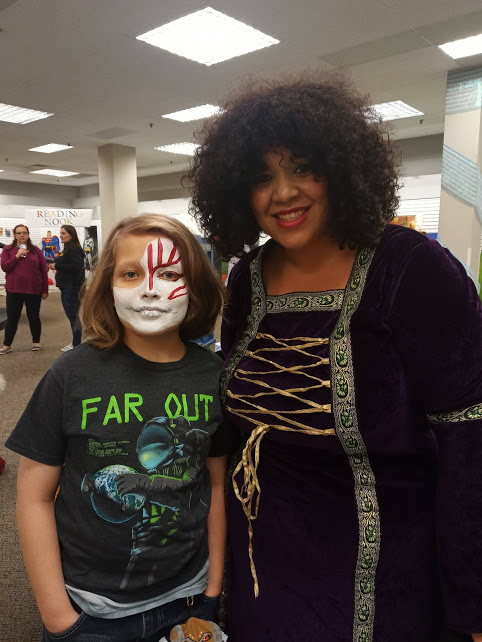 It might seem like a minor thing, but when you’ve got three tweens, they eat freaking everything. The ability to buy snacks at an affordable price is huge. It also let us stay at the convention longer than we might have otherwise been able to. We’ve been to other cosplay conventions where you were looking at a minimum of $3 for a beverage and food trucks only. I love supporting local business, but food trucks add up so fast when you have three kids. There were a few places to grab some food in the convention, including bags of chips and soda cans for a buck and hot dogs for $2.

This year’s convention was housed in the old Sears store at Woodland Hills Mall, which surprisingly made for a pretty good convention center. A little birdie told me that there’s a rumor about next year’s convention possibly being held at the fairgrounds’ Expo Pavilion, which would be super cool, too. 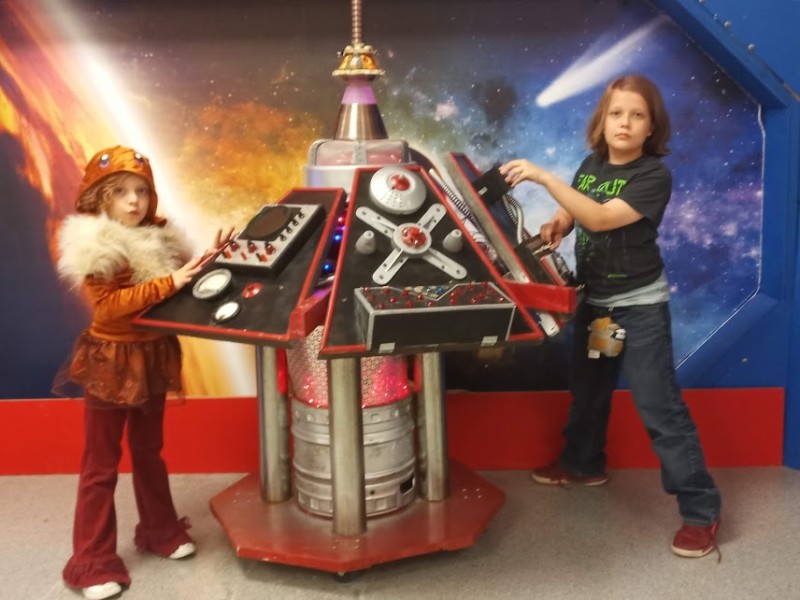 Here are our top moments from Tulsa Pop this year:

We saw Shazam! at the Admiral Twin when it came out and the kids loved it so much they couldn’t stop talking about it, especially Arthur. That’s why I was surprised when we walked up and said hello to Asher Angel, who played Billy Batson in the film, and Arthur didn’t recognize him.

To be fair, I totally get how weird it is to see someone out of context, especially someone you’ve seen on the big screen and weren’t really expecting to bump into in real life. But Asher, who is a pretty funny guy IRL, was a good sport about it, and afterward, Arthur was really stoked about getting to meet him.

We didn’t get to make it to many panels, but the one we didn’t want to miss was the State of Trek panel with Fanboys918, who I am now, in turn, fangirling over, so that officially makes me a Fanboys918 918 Fangirl, but I digress. If you don’t already know, my blog name comes from this quote on Star Trek Voyager and embodies some of my favorite things: strong women, the Lord’s own sweet beans, and the United Federation of Planets. TLDR I am a massive Trekkie, and so are my kids. 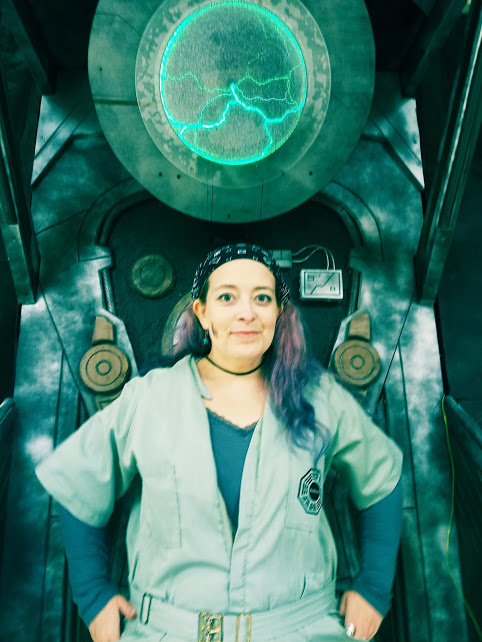 The panelists covered all the burning Trek issues like the upcoming Picard series and the Deep Space Nine film What We Left Behind. I’ve never been prouder of Arthur than when his knowledge of Trek earned him a T-shirt from the panelists.

The first thing we did when we got to the convention was to sign up to be the last group in the escape room the following day. When we got there, another fella and his daughter were waiting to see if a spot would open up, so we invited them to hang with us. Our friends Odessa, Max, and Oliver joined in the fun, too. It took us almost a full hour to solve and we did have to use some hints, but we had a blast mixing potions, casting spells, and luring a dragon away from its egg. 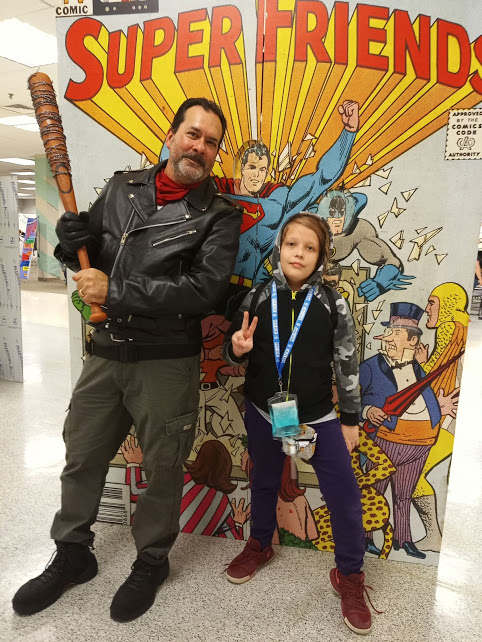 All in all, we had a fantastic time. Did you make it out to T-Pop this year? Share your pics with me on Facebook. Thanks for reading, and have a beautiful week in your nebula! 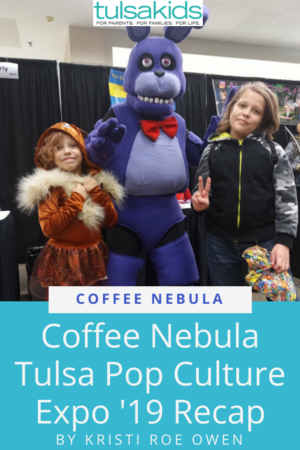