Coach Paul Mills: Practicing Intentional Communication On and Off the Court

In honor of Father’s Day, we visited with Paul Mills, Head Basketball Coach at Oral Roberts University, who seems to be winning in life on and off the court. Despite the pandemic, Coach Mills led his team through an impressive season, which garnered national attention, and earned ORU a spot in the Sweet Sixteen. Making it that far was part of his plan, but that loss was bitter-sweet. Forced to move on, he is already focusing on next season.

Learning a little more about the man behind his position revealed his genuine love of the game, passion for developing players on and off the court, and his focus on faith and family. His immediate family includes wife, Wendy, and two teenage daughters, Audrey and Abbey. So how does he handle the demands of his career while successfully managing his personal life? Coach Mills admits that he is intentional with his time and prioritizes communication.

TK: Tell us a little about your background growing up.

Coach Paul Mills: I grew up in a poor neighborhood in Houston, Texas. My dad was a pastor of a church and made $100 a week, so we didn’t have much money. To me, basketball is the sport of the poor in America. I couldn’t afford a baseball glove and bat or a helmet and shoulder pads but could go down at the end of the street with a basketball and play with 20 other kids. I loved being around other people, the joy, and the competition. All those things drove me to get better. For a lot of us who lived in that area, sports were a great avenue to get out of that socio-economic situation. I knew in order to improve my life, it would have to happen either academically or athletically, so I worked hard at both – making straight A’s while playing basketball.

TK: Why did you go into coaching?

Coach Paul Mills: After my freshman year of college basketball, I realized that the NBA was not a realistic plan for me. And eventually I got to a point where I realized my gift was not playing; my gift was helping others.  I also realized that I wanted to serve and assist others with similar backgrounds in their dreams and their endeavors. I definitely feel I’m doing what I was called to do.

TK: How did the pandemic influence this season?

TK: Would you agree that you are coaching them in life as well as basketball?

TK: How do you help your team handle a loss?

Coach Paul Mills: We do understand in life that everything isn’t always going to go our way. We use the analogy of a ball dropping but then bouncing back up. We have something internally in us, a core belief, a resiliency, so on the bounce back up, we think about the take-aways including what we can learn from it.

TK: Is there a favorite saying you reference? Why do you like it?

Coach Paul Mills: The New Zealand All Blacks rugby team has a saying, “Good people make good players.” I 100% believe that. It takes a team in order to get things done. It works that way in your family and in your organizations.

TK: What are some ways that coaching and parenting are alike?

Coach Paul Mills: One of the things you’ll hear me say a lot is, “Communication prevents disaster.” It works that way on the basketball court, and it also works that way at home. I’m very intentional about communicating. My daughters are 15 and 13. Every single day I ask my children to tell me one thing that happened during the day that I would know only if they told me. Sometimes it leads to something small, but other times it leads to something bigger. We’ve been doing this five nights a week since they were 3 years old. I do have to be very intentional about our communication.

TK: How would your girls describe you as a dad?

Coach Paul Mills: The first thing I hope they would say is that my dad loves me based on his level of interaction with me. Secondly, they would probably say, given my age, is that I’m really corny. And third, there’s nothing I can’t talk with him about. There’s nothing I couldn’t approach my dad with and he wouldn’t help me with whatever it is.

TK: What’s your favorite part about being a father?

Coach Paul Mills: I think it’s watching their growth, development and maturation process over time. One of the things I’ve done since they were in kindergarten is to write them a letter at the end of each school year. In it, I share what I’ve seen in them over the course of the year and acknowledge how they’ve grown. I get great joy out of watching them grow! And children just love to get mail! Now, my daughters are in 10th grade and 8th grade, but they still like getting mail!

TK: How did the idea of writing them a handwritten note come about?

Coach Paul Mills: Years ago, I started writing a letter every single day to people I know. I write 365 notes a year to let people know that I am thinking about them. Because I would write a letter every day, I started writing to my children. From my perspective, it takes some time to actually sit down and write something out. It’s more than sending a text with an emoji. At the end of the day, it’s a five-minute procedure. I can promise you that those people on the other end of it are usually going to get more out of it than you did writing it.

I think we need to be very deliberate and intentional in our communication, not only at home, but with our colleagues. We can communicate in a loving way that expresses belief in that person!

TK: What is some of the best advice you’ve received?

Coach Paul Mills: Some of the best advice I’ve gotten is to ‘Sleep on it.’ Sometimes we get in a mode and realize that if you make a decision at that point, it may be different if you’d slept on it. I do know if a decision is keeping me awake at night, I might need to take another 24 hours to think about it before I make that decision. I try to make rational decisions rather than emotional, reactionary decisions.

Also, my father was diagnosed with early onset Alzheimer’s at 58 and ended up dying at 62.  I attribute that to a lack of sleep. He regularly went to bed at 11 p.m. and woke up at 2 a.m. He was a pastor and drove a truck to make ends meet. I watched him go to bed late and wake up early all for his family. So, I would tell you to prioritize sleep for many reasons.

TK: What are you thankful for right at this moment?

To listen to the full interview, check out the Sharing Passion and Purpose Podcast by Nancy Moore on your favorite podcasting platform. 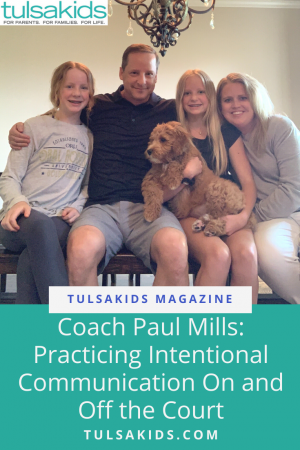