Childbirth Now and Then

In anticipation of the publication of our annual Baby Guide (coming out in early May), some of our bloggers will be sharing their stories of childbirth. If you missed last week’s Grand Life post, you can find the birth story of Diane’s grandson here, as written by his mother, Alexandra Kondos.

I gave birth to my first child in May of 1987 when I was just a few days shy of 29 years old. My husband and I had been trying to get pregnant for a year, and I had gone through many months of tearfully worrying it might never happen for me, so I was ecstatic when the dot turned blue. Women have been giving birth since the beginning of time, but there have been some changes along the way, and those have led to changes in the infant mortality rate. When my daughter was born in 1987 the infant mortality rate in the United States was 10 deaths per 1,000 births. Thirty years later when my daughter gave birth to my grandson, the infant mortality rate had dropped to 5.9 deaths per 1,000 births.

The differences between my daughter and I began in pregnancy. I was very nauseated for the entire nine months. Although the doctor never gave me the diagnosis of hyperemesis, I suspect I was very close to that point. I rarely had a day that I didn’t throw up numerous times, and there were many days I wasn’t able to leave the bathroom for hours. My daughter had a bit of nausea the first trimester, but for the most part seemed to sail through her pregnancy with very few issues. Another difference was in the clarity of ultrasounds. The one ultrasound I had during pregnancy was a blurry gray picture, similar to static on a television. I believed it was a baby only because they assured me it was indeed a human baby. My daughter had numerous ultrasounds, and they were amazingly clear, like 3D photographs! I could hardly believe the details I could see in these pictures of my grandson. Because of the quality of ultrasounds in the ’80s I chose to not have the doctor guess the sex of the baby because it was often just a guess unless you had chromosomal testing. My daughter knew without a doubt that she was having a boy. 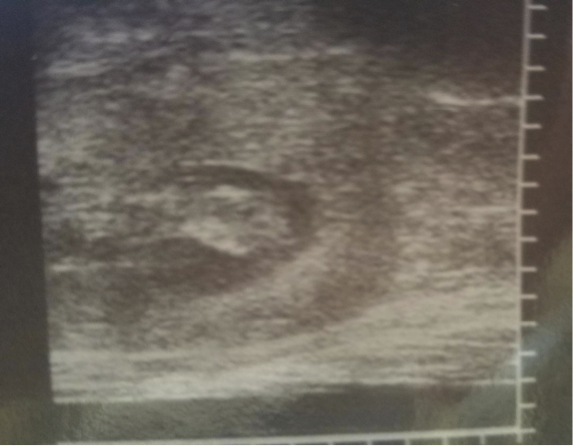 Because of the uncertainty of the baby’s sex, gender reveal parties were unheard of, and that’s one trend I’m not sorry I missed. One of the generational changes I do love is the inclusion of men at the baby showers. I had several showers, and there were only women in attendance, which was the norm at the time. My husband was just as excited about our baby and would have loved to have been included. My daughter and son-in-law had a shower where all their friends, men and women, were invited. I also love the new trend of “sip and see” showers! It gives the parents a chance to show off their new baby, and the mom is more likely to feel ready for a party. 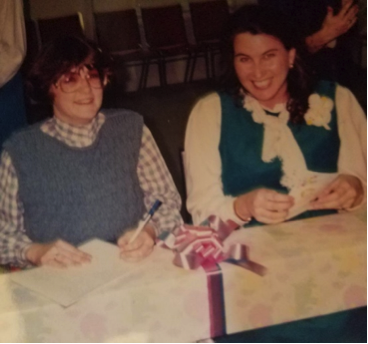 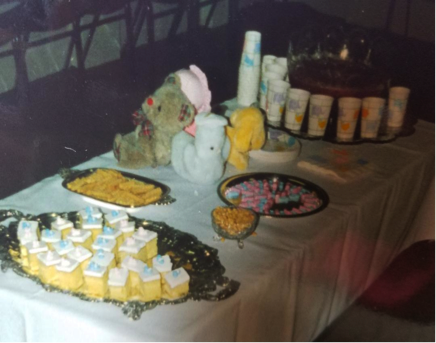 I had two very traditional showers. No party in North Carolina is complete without homemade cheese straws!

I was living in a rural area in North Carolina during my first pregnancy, and the closest hospital was a small, rural hospital thirty miles away. It may have been 1987 on the calendar, but the doors of this hospital were a time machine and once you entered, you were in 1950. My obstetrician, who was also a friend, had warned me ahead of time that he wasn’t comfortable with the anesthesiologist’s skill level with epidurals, citing a near fatal incident during a delivery the week before. That should have been a clear warning signal, but there were no other options in the area besides a home birth.

My due date was April 27th and I had an appointment scheduled for May 1st to check on how things were progressing. I had been having Braxton Hicks contractions for weeks and was dilated to three for the last week. When the doctor did the exam, he discovered I was leaking amniotic fluid so the decision was made to admit me and begin Pitocin. I was laid on a metal table, comparable to a gurney and strapped down flat on my back. After three failed painful attempts they finally were able to insert an IV and began Pitocin. The nurse had never administered Pitocin before and gave me way too much, resulting in almost constant contractions causing the baby’s heart rate to fluctuate dramatically and for her to pass meconium. The contractions were painful, but the back pain from lying on that metal table for 12 hours was almost unbearable so when the doctor announced we needed to do a C-section, I didn’t voice any opposition. After 12 hours of labor I was given a spinal block and an emergency Caesarean was done to deliver my daughter. She was immediately whisked away, but I did get to see her after about an hour. 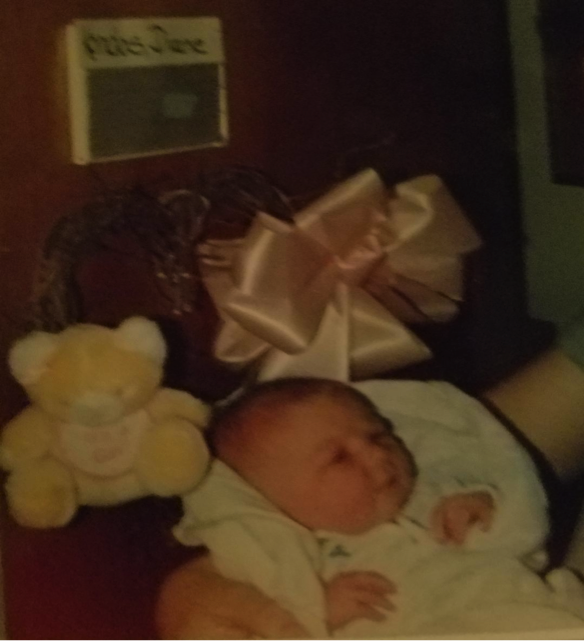 My firstborn on her second day of life!

Babies typically stayed in the nursery except for feeding time, but I requested she be kept in my room most of the time. I recovered from the C-section fairly quickly and because I had been so horribly sick during my pregnancy I gained only seventeen pounds and lost it before I left the hospital. But not everything went smoothly; I had a very difficult time nursing.  I had always assumed it would be an easy undertaking that would come naturally, but it was anything but simple for me. When I asked the nurses for help, they responded by telling me they hadn’t had a woman choose to nurse in several years and they had no idea how to help me. This was before the internet so I was on my own. It was a frustrating struggle for me and my daughter, so after the first 6 weeks I went to bottle feeding and we were both much happier! I realize breastfeeding is best, but feeding your child, however that is accomplished, is paramount. 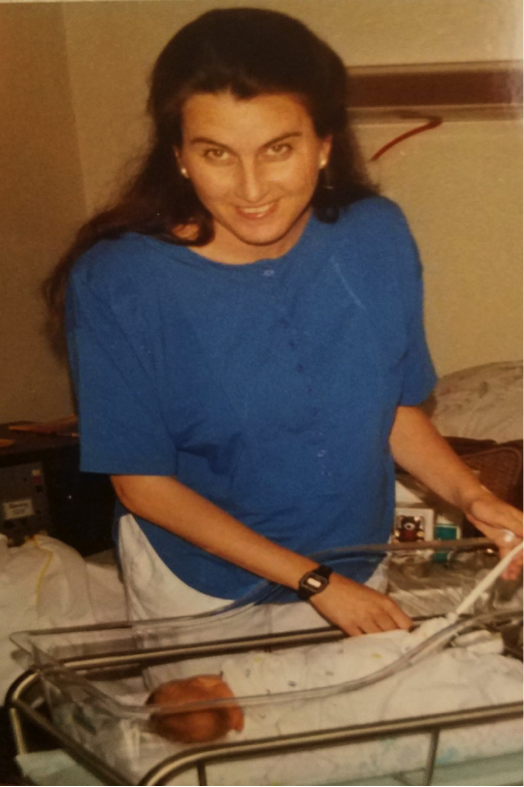 Last day at the hospital with my first born; I couldn’t wait to go home!

I’m not sure how much my experiences were dictated by the rural area I was living in or the time period. When I gave birth to my second daughter in Tulsa 15 months later I was in a modern hospital and the procedures were so much smoother. My new obstetrician recommended that I have another caesarean since the births were so close together. I know some women struggle with not having a vaginal birth, but I had no problem agreeing to another C-section. At the time, five days in the hospital post caesarean was typical, and that’s how long I stayed with each birth. The first time that seemed way too long, but the second time I wished I could stay a bit longer because I knew it was going to be awhile before I got anymore rest. 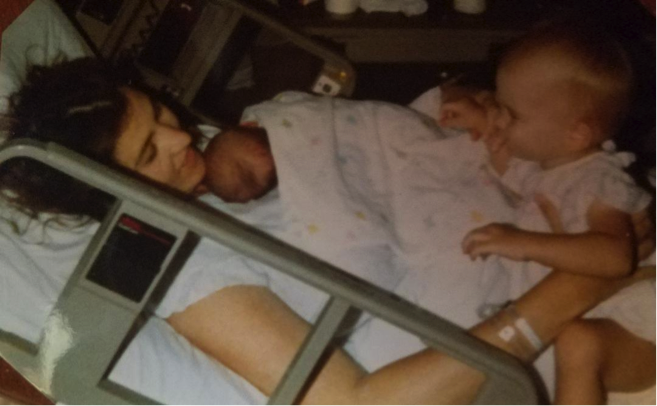 My daughters meet for the first time, the calm before the storm. I wanted to stay longer, they almost had to kick me out of the hospital!

I had a very difficult time recovering from the second C-section. That child turns thirty this summer and I’m still not sure I’ve recovered, and I know I haven’t lost the weight! I attribute my difficult recovery to several things. With a 15-month-old and a newborn there was no opportunity to rest and mend. My husband worked long hours so I was on my own with two babies as I recuperated from abdominal surgery. To make matters worse, all of our bedrooms were located on the second floor, so it was a lot of climbing stairs with a baby and a toddler. Not a good recipe for recovery. Looking back, it would have been a wise investment to hire help for the first couple weeks. I hope that my experiences with two young ones at home and not much assistance have helped me to be a better grandmother. However, I also more clearly understand why my parents didn’t help as I would have loved. Taking care of babies is hard in your 30s, but in your 60s and 70s it’s really tough; but that’s a topic for another day.