“Charlie and the Chocolate Factory”:

When Celebrity Attractions announced that “Charlie and the Chocolate Factory” was coming to Tulsa, I knew I wanted to take Joss! He really loved the movie at the time. And how could it not be a magical show? Of course, the pandemic delayed “Charlie” for at least a year. In the meantime, I think Joss mostly forgot about the Willy Wonka movie. But when we had a chance to attend the opening night performance, thanks to a couple media tickets courtesy of Celebrity Attractions, I said YES! 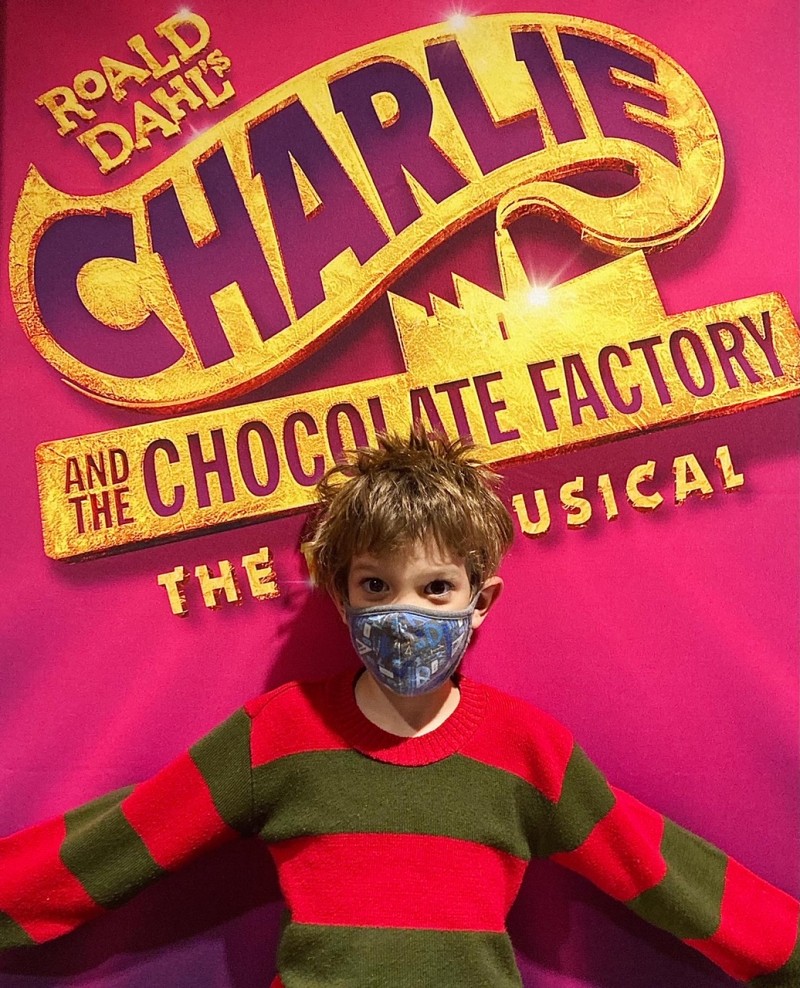 When I first told Joss, he wasn’t thrilled. So we watched the Gene Wilder version a couple times over the weekend, and he was reminded how fun the film is. His favorite character is “the I-want-it-now girl.” I spent several days hyping it up, along with reminders about how watching a stage show is different from watching TV at home. The main difference being that you can’t talk through it! He told a few friends (and a nurse at the pediatrician’s office) he was going to get to see “Charlie” on stage, and that they should at least see the movie if they weren’t able to go. So his enthusiasm had grown by opening night, thank goodness!

I was still nervous about him being too loud and wriggly. After all, it’s a full-length, nearly-three-hours production! It started at 7:30 p.m., aka bedtime. And I knew we wouldn’t get home until after 10 p.m. Thankfully, our tickets were at the very front – row A. Not only did this mean he got to peek at the incredible musicians before the show, it also meant we were right next to the giant speakers. So although he did whisper a couple times, the production was loud enough that I wasn’t too worried. (The last thing I wanted was a repeat of when we went to “The Nutcracker” a couple years ago, and he started singing about hot dogs during the performance!) 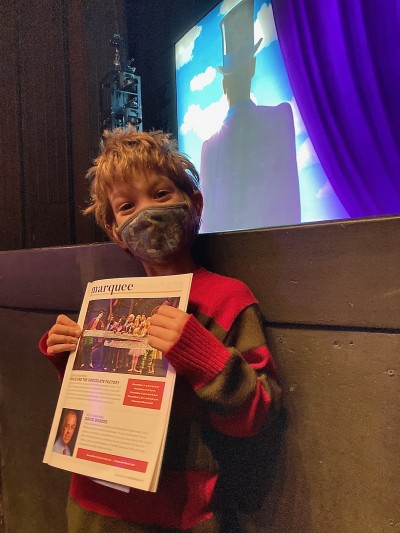 The wriggling was a little trickier. It’s hard to sit still that long, and Joss can have some dramatic reactions! But it was so much fun seeing him laugh throughout the show. I’d forgotten to grab a child booster on the way to our seats. If you’re going to “Charlie” with a young child, keep an eye out for the booster seats as you enter the auditorium. They can be very helpful. He sat on my lap part of the first act, which was fine.

We arrived about an hour early. It was cold and rainy, and because we had free tickets, I had no problem with paying the $10 parking directly across from the PAC. So worth it. Before the show, we walked around, took some photos, visited the bathroom, and chatted. Once we were seated, Joss enjoyed looking at the program and asking about the actors. So that’s another tip – definitely grab a program on your way in! 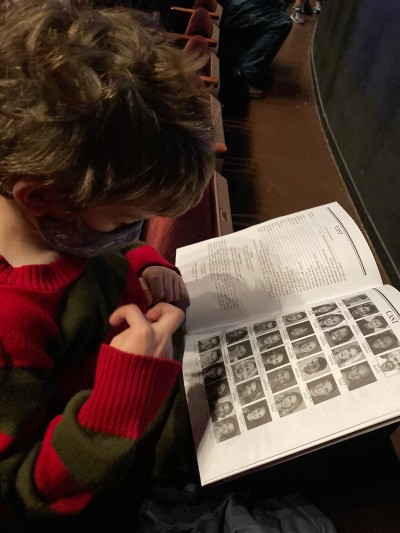 Joss loved “Charlie and the Chocolate Factory.” He was recounting his favorite parts this morning at breakfast. And we talked about how some of the special effects worked. Even at 2.5-3 hours, it held his attention the entire time. My favorite part about the show was Coleman Simmons as Charlie. In the Gene Wilder version, Charlie is pretty subdued. But this Charlie talks a mile a minute. The show really emphasizes his love of chocolate, too. So he doesn’t just want a golden ticket and some chocolate, you can tell from the beginning that he is destined to be a chocolatier. He has a notebook that he records candy inventions in, when he’s supposed to be doing homework! As a future inventor himself, I imagine Joss appreciated Charlie’s inventiveness and enthusiasm.

Cody Garcia as Willy Wonka was incredible, too. He had some facial expressions that were really reminiscent of Gene Wilder’s version. And no matter how selfishly Wonka was behaving, he remained pretty likable. 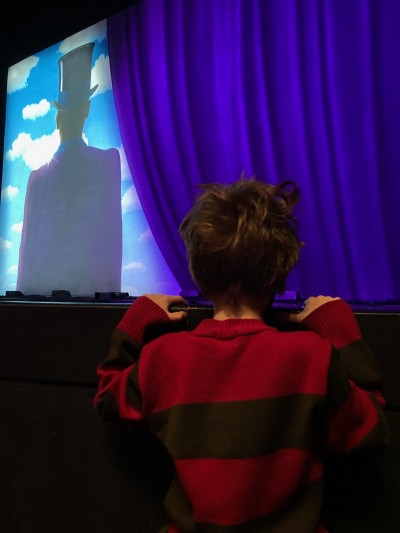 There are also some really fun effects! My favorite being the Oompa Loompas, but I won’t say more about that! They were a great surprise though, and I can only imagine how coordinated the actors playing them would have to be! There was also a scene on the chocolate factory tour where the actors had to pretend to move through an invisible obstacle course. That was very well done, and one of the parts Joss was still laughing over this morning.

If you’re taking younger kids, this version is slightly deadlier than the original! In the book and movie, all the kids end up stretched, blue, etc., but they walk out of the building okay. In this version, at least one of them is very definitely dead! I mean, Wonka says “glue will put her back together,” but…yeah, no. This didn’t bother Joss, although it was part of our discussion about special effects! How to make it look like someone got dismembered.

There are also a few “adult” jokes, but those definitely went over his head.

Grandpa Joe tells some war-related anecdotes that are played for laughs. But a couple of them made me cringe. Not sure if that’s me taking things too seriously. Or if you’re just supposed to come to the conclusion that even the “good” people in the show are kind of awful. After all, not even Charlie is overly disturbed by all the kids getting killed off!

Get Your (Golden) Tickets!

“Charlie and the Chocolate Factory” is playing through November 7. Showtimes are as follows:

If you’re going with younger kids, check out this article from our April 2020 magazine. Of course, it was published right as everything was shut down due to the pandemic! But it’s got some great tips on taking kids to the theater: tulsakids.com/tips-for-taking-kids-to-the-theater. My top tip would probably be to try watching the movie beforehand so kids know more or less what to expect. There will still be plenty of surprises, but they’ll also get to anticipate some of their favorite scenes. I think that definitely helped hold Joss’s attention.

Also, follow @bwaytulsa on Instagram. Joss and I watched their Story this morning. One of their cast members did a takeover yesterday, where she showed some behind-the-scenes footage. So that added another interesting dimension to the overall experience!

Did you see “Charlie and the Chocolate Factory”? What did you think? Do you have any other tips for taking kids to a live performance? Share ’em in the comments! 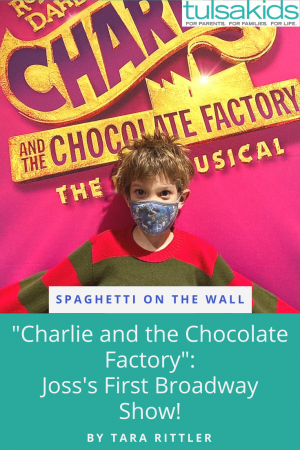