Looking back on my pregnancy and delivery.

In anticipation of the publication of TulsaKids’ annual Baby Guide (coming in early May), we have asked some of our bloggers to share their birth stories. Here is the story of Diane Morrow-Kondos’ grandson’s birth, written by his mother. Next week, look for Diane’s post about how birth has changed from the time she gave birth to the time of Callister’s birth.

I gave birth to my first child last June. I was 30 years old, I had been out of school for 3 years, and my partner and I had been together for 10 years. The average age of a first-time mother in the United States was 28 years old, but we were the first among our close friends to have a child. While we weren’t married, we were ready to be parents and the pregnancy was planned.

At the Saturday-long ‘birthing intro’ class they asked the parents-to-be what their biggest fears were. Most of the concerns were about the experience not going as planned, with the birth requiring interventions.  I expressed that my biggest fear was dying. Even the instructor laughed. While the concerns about the experience are certainly valid, the very real possibility of dying in childbirth was not a fear openly discussed by anyone at any point in my pregnancy apart from my conversations with my partner about my wishes in that event. Instead the class talked about epidurals and the ‘golden hour’ and what to expect with a C-section. My newsfeed on social media exploded with advertisements for cord blood banking and the benefits of eating your placenta. An overwhelming amount of information was at our fingertips; filtering out the pieces we found valuable was the challenge.

My obstetrician was chosen carefully on the advice of a family member, and I visited her for a routine visit before we started trying to conceive to make sure she was a good fit. Factors like insurance and delivering at the hospital close to our home were important, but I also knew whoever we chose would be our partner in making the first important decisions in our child’s life, and potentially some really tough decisions if there were any complications. A doctor who practices evidence-based medicine, keeps up with the literature, and offers me the information and gives me options were all criteria that I used in choosing my doctor. A short ultrasound was performed at every visit; the print outs of these images were a nice bonus and gave us something concrete to hold onto while we awaited our son’s arrival. At one of the later ultrasounds, we could even see that he already had hair. 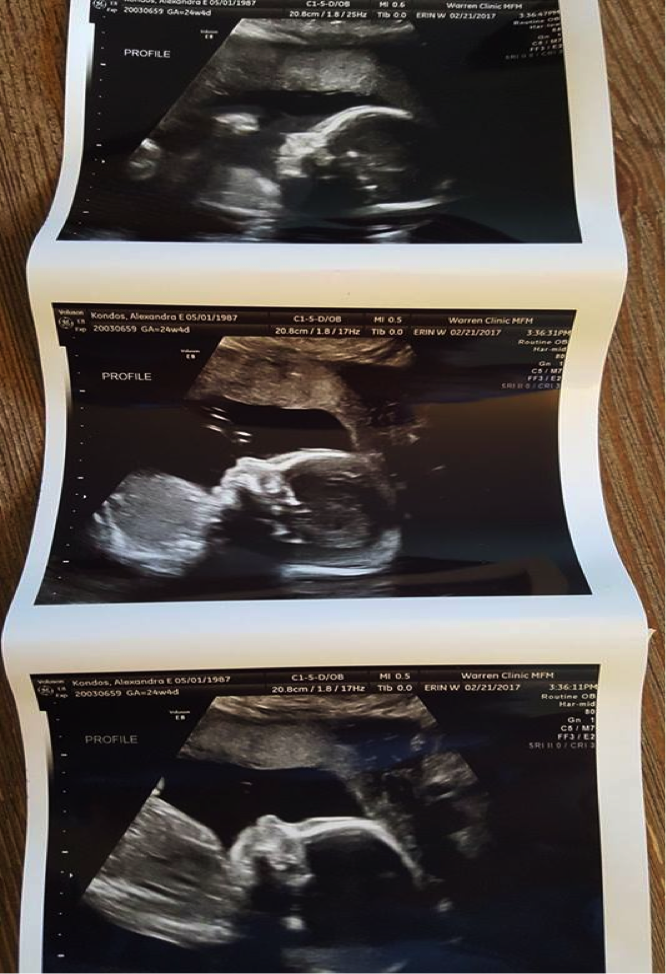 I announced my pregnancy to my co-workers before we told even our close family. I needed their help in limiting my exposure to radiation, anesthetic gases and physical harm from our patients. Management needed to make arrangements for my maternity leave. How long did I need or want? How long could I afford? I am responsible for the majority of my family’s income and all of our health insurance.  I looked over my FMLA and short-term disability paperwork and chose 8 weeks, starting a week before the due date. I worked full time (four days a week, eleven to twelve hours a day), my last day was June 1st, he was due June 8th and was born June 13th. My co-workers were great about helping me take precautions to keep myself safe, and they were understanding in not booking me any long surgical procedures when I found myself quick to overheat surprisingly early in the pregnancy.  Despite these accommodations the last 3 weeks at work were tough, I ended every day exhausted (the anemia I struggled with throughout the second and third trimesters didn’t help) and with very swollen feet and ankles. Overall, I was lucky to have a fairly textbook pregnancy with a fetus that read the book and developed on schedule.

We had our baby shower at my parents’ house. The party was not limited to women and we were lucky to have many friends and family join us to celebrate. And while I enjoy humor involving human feces and comments about my body size just as much as the next girl, we decided to skip baby shower games and just enjoy the food, Bloody Mary bar and the company of our guests. We also opted out of the currently in vogue ‘gender reveal’ party; without getting into social issues, it just isn’t our style. 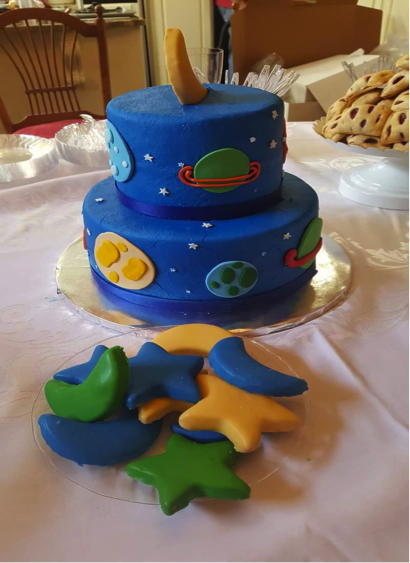 The cake at our space-themed baby shower

At our OB visit on his due date, she told us that we could discuss the possibility of induction at any point but as long as I felt ok and as long as he continued to perform well on the non-stress tests there was no rush. I didn’t have any interest in having my cervix checked either, as dilation is not a good predictor of labor anyway. The extra time gave us an opportunity to do some last-minute preparations I had been too exhausted to do while I was working, like pack a hospital bag and decide I didn’t really want to prepare a written birth plan. The morning of the 12th I woke up at 2 a.m. and found my water had broken. I used a phone app to time contractions, and we decided to head to the hospital around 8 a.m.

When we got the hospital, they verified that my water had broken and I was already at 5 cm, so they checked me in and notified my OB and got us set up in a labor and delivery room. They hooked me up to monitoring, and contractions continued to be consistent and increased in intensity as the day went on. I labored unmedicated until 5 p.m. or so when my OB came in to check on me. When she told me I was still just at 5 to 6 cm, I was upset and exhausted. My OB said they needed to start internal monitoring of contractions and also infuse artificial amniotic fluid and start IV antibiotics since there was meconium in the amniotic fluid. Also, he was positioned head down, but he was facing sideways so they needed to try to rotate him. His arm was also across his chest. At that point I requested IV pain mediation so I could rest while they got those things started.

They told me the IV butorphanol would just ‘take the edge off’ but I would still feel everything, but I quickly fell into a warm, comfortable twilight sleep that I was thankful for. I could hear everyone but could not really respond to questions. It was so nice and the first break I had really had since my water broke. They hooked me up to the internal monitoring, tried alternative positioning to get the baby’s head to rotate and infused the artificial amniotic fluid during this time. By the time this started wearing off I was close to 8 cm, and they told me I could not have another dose, so I requested an epidural. The doctor placing my epidural was so skilled, I didn’t feel anything after the prep and it was done so quickly I didn’t have time to be anxious about it. After the epidural things started to progress quickly, and it was time to push. At this point I could still move my legs but not really hold them up, so my partner held one leg and a nurse held the other. I could still feel when a contraction was starting. I pushed while the OB continued to attempt rotation. This went on for a little over 2 hours. She asked me at that point if I wanted to try the vacuum or if I was tired and wanted to go to C-section. I found energy and after 2 or 3 contractions with the suction he was born (30 minutes past midnight, making his birthday June 13th).

I wasn’t particular about my birth plan, but I had wanted two things: delayed cord clamping and immediate skin to skin. Due to the meconium in the fluid I wasn’t able to have either unfortunately. He had to be taken away to have that cleared out. My partner followed him and stayed with him and was able to hold him pretty soon after birth. I felt fairly informed and prepared for most of the process, but what no one warned me about was the shaking. As soon as he was delivered I started having uncontrollable full body tremors. They assured me it was normal. That did not stop until later when they laid him on me and we were able to have skin to skin. The hospital likes to keep babies in the room with their parents, but after holding him for a bit and letting him nurse we were exhausted and asked them to take him to the nursery so we could sleep. 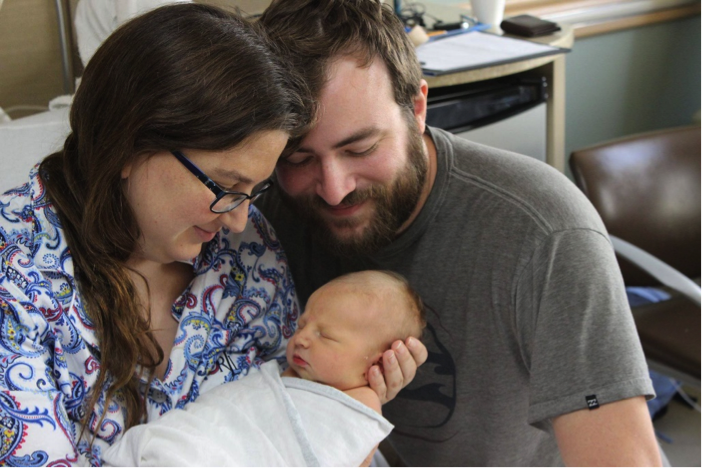 They knew I intended to breastfeed so they brought him to be every two hours to nurse. I met with two different lactation consultants while in the hospital, and after discharge we followed up with visits with the lactation consultant at pediatrician’s office. I joined online forums about breastfeeding. I messaged friends at odd hours asking for advice and reassurance. Despite a plethora of support breastfeeding remained a stressful experience for the duration of the months we kept it up- what I had hoped would be a great personal time of bonding between the two of us was instead an adventure of sterilizing pump parts, showing half of Tulsa my left nipple, and saying phrases like ‘Did one of the dogs eat my nipple shield?’.

We were discharged from the hospital the afternoon of the 14th. My doctor took me aside and asked how I was feeling and if I was ready to go home. The stay in the hospital was so nice, but I was afraid if I stayed any longer I would be overly hesitant to go home with him and start caring for him without all of the assistance they provided. I admitted that the feelings I had toward him weren’t instant attachment, instead I just felt worried about him and anxious about taking care of him. She reassured me that it was ok to feel that way and that I would grow more attached to him over time. She was absolutely right, and I am glad that she took the time to acknowledge my concerns.

I went back to work when my son was 7 weeks old. I had a tough time with the idea of leaving him to return to my job, and my last week of leave was emotional as I anticipated long hours away from him. Once I was back into the routine of work I felt like I really started to feel like myself again mentally and emotionally. I work 4-day weeks and more often than not he is asleep when I get home from work, but on my days off I can usually devote the day to spending with him.