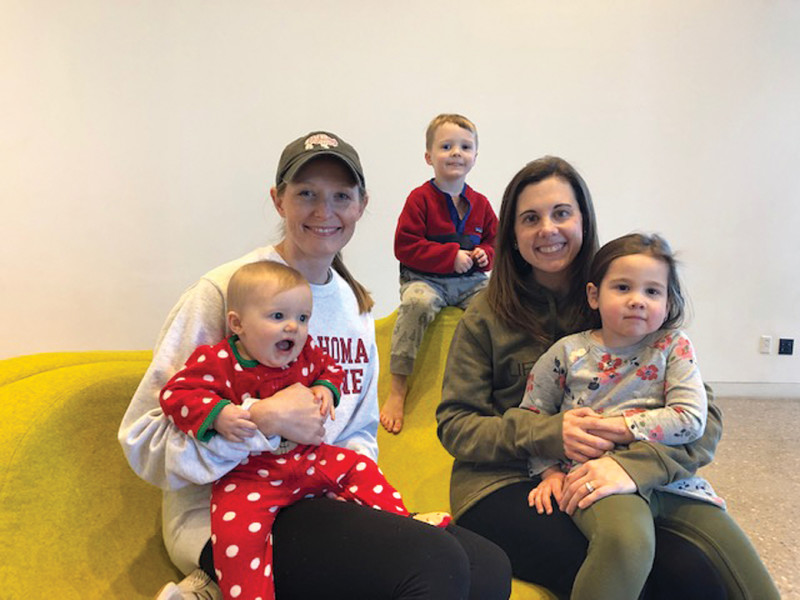 With four young children between them, friends and moms Kara Allison and Rachel Irwin were letting their children enjoy exploring Gathering Place’s outdoor attractions on a warm December day. We talked about their thoughts on young children and brain development.

“To the extent that I think about it,” Rachel said, “I think it’s about reading and talking conversationally to your child, even when they’re to young to talk back.”

Rachel has several teachers in her family as well as a son in kindergarten, so she has picked up information from her family and from what her son has been learning at school. She uses rhymes, singing, conversation and books to build a strong foundation for learning.

Kara also has educators in her family, including a mother-in-law who teaches kindergarten. She affirmed Rachel’s comments, but also added that she has learned from her mother-in-law that playing outside and giving children plenty of opportunities to use their imaginations are important for brain development in young children.

Regarding technology, both women acknowledged that screens are a part of their children’s lives, but they carefully monitor their use.

“Both of my kids, ages 3 and 5, have tablets,” Rachel said, “but we limit screen time. They don’t get very much. And whenever I see my son having behavior problems, I take them away completely.”

Rachel says she notices a big improvement in her son’s behavior, particularly impulse control, when he is not using screens.

Kara also noticed that Gunnar’s behavior deteriorated when he spent too much time on a tablet or watching TV. “He’s not as obedient,” she said. “He won’t do what he knows he’s supposed to do. He’ll want to keep watching TV or stay on the screen rather than eat. They’re definitely addictive.”

Both Rachel and Kara say they will monitor how much screen time their children get in school as they grow older, and will continue to limit screen time at home.

According to professionals, Rachel and Kara are doing things right.“One thing that researchers in child development talk a lot about is the importance of the first thousand days,” said Dr. Dian Horm, director at the University of Oklahoma’s Early Childhood Education Institute. “Brain development is rapid up to age 5, so that early progression lays the foundation for all future development.”

For parents, those early experiences or lack thereof can have a tremendous impact on not only the child’s brain development itself, but also connections and the experiences those children have with them as they grow older.

“I like to use the serve-and-return analogy,” Horm said. “You know, it’s like a tennis match in that it’s important for parents to be responsive to their child’s coos and overtures by repeating and expanding upon that. It’s this cycle of reciprocal interactions, and it’s particularly essential for teachers and parents.”

On top of simply being responsive, parents will also want to provide their kids with a set of engaging activities.

“These don’t necessarily need to be tied to the latest toy,” Horm said. “Sometimes a box or a safe kitchen utensil is all they need. Parents don’t need to spend a fortune. Honestly, it can even be as simple as pointing things out about the world around them – the shapes of the apples at the grocery store, for instance.”

Even with this degree of attentiveness in place, though, there are certain trappings parents will need to actively avoid.

“Most kids who grow up in average families end up doing fine,” Horm said. “That said, parents shouldn’t cause too much stress for too long. I mean, mild stress is good for us – it motivates us to go to work. What I’m talking about is toxic stress – the kind that makes the child hyper-alert and promotes negative behavior. It impairs good connections being built in the brain.”

The director referenced ACEs (Adverse Childhood Experiences/Events) and how they may be tied to health issues experienced later in life. Many clients who suffered child abuse or witnessed violence when they were younger, for example, died at a relatively young age or experienced chronic health problems.

“Going back to activities, you’ve got to strike that balance between outdoor and indoor play,” Horm said. “Make sure children have a range of experiences. In an age where it seems as though people aren’t really going outside, many schools are cutting recess. For some kids, that’s their only time of the day to run or use their larger muscles.”

Similarly, Horm recommended that parents promote a greater connection with nature. Let them take in the world around them – the trees, the leaves, the dirt.

“Being someone who studies infants, I’ve found that it’s a gradual process in terms of developing things such as impulse control and empathy,” she said. “We have a hard time measuring infants, but the root of things like empathy start to form in infancy.”

Horm noted that some parents may feel silly for talking, reading or singing to their infants – that they might just think “what’s the point? They don’t even know what I’m saying!”

“Even so, start this stuff at birth,” she said. “They may not know the actual words, but they are learning about language and when to take turns in a conversation.”

“Look at it less as them trying to get to you,” she said. “Maybe they don’t even know what the right thing to do is.”

Brain development doesn’t end at infancy, though. Indeed, it’s a lifelong process, but some of those foundations are certainly solidified throughout early childhood and adolescence.

“As kids get older, they want more authority, and parents can encourage that in positive ways,” said Dr. Amanda Morris, Regents Professor at Oklahoma State University. “Have those conversations that get them thinking, but don’t just make all of their decisions for them. You need to be their ‘frontal lobe’ and set those boundaries because their brains are not fully developed.”

In terms of what could inhibit an older child’s development, substance abuse was Morris’ immediate go-to. Additionally, if the child is involved in sports and experiences a concussion, then parents need to be aware of the potential long-term effects and act accordingly.

Just as it’s important for infants to have a variety of engaging activities, older kids and teens should venture outside of their own neighborhood – both literally and figuratively – and create new experiences.

Regardless of age, excessive amounts of screen time have proven to have an adverse effect on a young person’s development and academic performance. Additionally, parents will want to make sure kids get at least eight hours of sleep each night. Bedtime should be screen-free for everyone.

“Screen time is not always so clear-cut, though,” Morris said. “Some kids use technology for positive purposes such as staying connected with or learning more about the world around them. Obviously, though, you want to set limits and boundaries.”

Exercise, too, is a wonderful way to relieve stress hormones – again, regardless of age. That said, considering school can often demand higher-level thinking, physical activity is – in some ways – even more important for adolescents.

“Around the time kids hit age 10, you see them begin to think in more abstract ways,” Morris said. “When kids are little, parents help them regulate emotions. When they’re teenagers, parents provide support as a sounding board, but the idea of ‘I’m going to take care of all this for you’ isn’t really appropriate. As kids get older, you want them to be able to handle more on their own.”

Supporting the notion that child’s brains can be re-wired – at least to some extent – Morris likened the human brain to plastic.

“Of course, some patterns are kind of set as we get older, so the extent of rewiring is debatable,” she said. “However, kids are more susceptible to new experiences. That’s why drug use is so dangerous – that ‘reward response’ is so powerful.”

Even now, research is ongoing. Since 2016, the Laureate Institute for Brain Research’s ABCD (Adolescent Brain Cognitive Development) study has enrolled 10,000 children, the goal being to follow them from age 9-10 into early adulthood.

“We have 743 children enrolled just at the Tulsa site of this study,” Morris said. “There’s a ton of valuable research and Tulsa is really at the forefront of these studies.”

For more information about the study, visit http://www.laureateinstitute.org/abcd.html 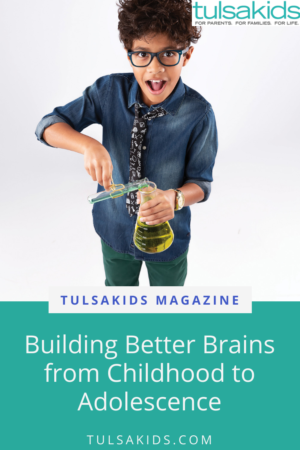