Noah Roberts, owner of The Water Co., sees young people as the key to cutting plastic waste in Tulsa.

With over 55,000 miles of shoreline in our state, it’s hard for Oklahomans to really comprehend how precious water is. For most of us in the United States, safe drinking water is just a tap turn away, but for the majority of the world’s inhabitants, it’s a scarce resource. Plastic waste in the form of disposable bags, straws, cups, lids and bottles threatens our water supply as it degrades, leaching toxins into our watersheds and soil. Noah Roberts of Tulsa’s The Water Co. wants to do something about it. He’s launching “Billion Bottles,” a campaign to remove single-use plastic in our city with kids as the agents of change.

“To remove plastic from nature and our waterways, you have to educate and inspire people to do so. The reality is people my age and older generally agree that it’s a good idea, but they’re not willing to put in the work,” Roberts explains. “In my experience, kids from grade school to high school not only think it’s a good idea, but they’re actually doing it. They’re walking around town with a smart phone and a reusable water bottle, so they’re already ahead of the curve. If we can inspire that generation, within their lifetime the problem could be solved.”

Roberts sees kids as early adopters whose actions can then motivate an older generation.

If kids give up disposable plastic, Roberts thinks their parents will follow. 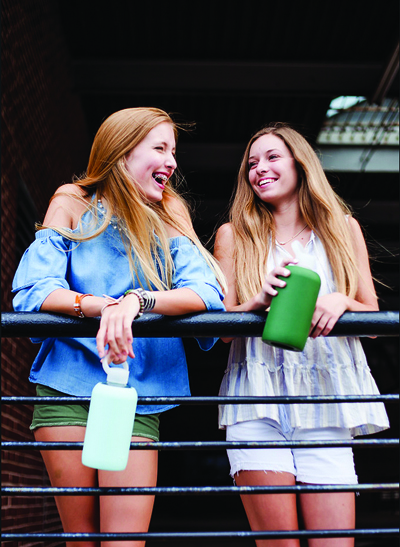 He keeps the message close to home.

The premise of Billion Bottles is simple. If 1.1 million residents in the greater Tulsa area each give up three disposable plastic items a day (a single-use bottle, cup, straw or bag, for example) that alone would save 1.2 billion pieces of plastic waste each year.

“I start with a single to-go cup. It’s a lid, a straw and a cup. That’s three pieces of non-recyclable toxic waste,” he notes. “There’s nothing that can be done with that cup other than go into the ground and leach, get into a waterway and break into micro-plastics that can’t be separated from H20, or be incinerated at our waste-to-energy plant.”

According to Roberts, the key to the campaign’s success is to make it fun and easy.

“It’s one thing to have a good idea that inspires people, but it has to be easy to adopt. It’s just very difficult to change human behavior. To get a lot of people to move in the same direction at the same time, it has to be fun,” he explains. “We’re not for bans. We’re all about inspiring better alternatives. If I give you a cool bag that’s full of 10 other bags that you can easily store in your car or bring with you, that’s a good idea. If I can share a to-go coffee cup, that’s a good idea. If we can inspire people and we make it easy to make the change, then yes, you have a chance of tilting it.”

Roberts has devised some simple ideas to make this work. For example, placing water bottle filling stations in Tulsa Public Schools will encourage the use of reusable water bottles. He’s partnered with Specialized, a company known for their bicycles that also produces “Purist” water bottles, to design a custom bottle. Proceeds from the sales of the bottles will be used to purchase and install the filling stations.

“For every 150 bottles that we sell, we can pay for one bottle filling station,” he explains. “We came up with really fun, useful, good-looking bottles. We’ve priced them where people can afford them, and then the goal is to let the kids do it.”

Roberts thinks sports teams, PTAs and classes will take on the challenge.

He’s also partnering with other local businesses and organizations to achieve a plastic-free Tulsa. Tulsa Tough and Hop Jam are working with Billion Bottles to eliminate their use of disposable water bottles at upcoming events, and local coffee shops are considering a plan to incorporate reusable to-go cups.

Fall Break Activities in Tulsa and Beyond