I don’t know if you’re like me or not. Coming from the understanding that most of us have more in common than we think, I’ll assume you are. At least a little bit.

I don’t want them to miss out on anything. I want them to have things I didn’t have as a child, and in many cases things I did have. I worry that if they don’t have extracurricular activities, go on vacations, experience art and music and have “quality time” with me that they’ll some how miss out on a meaningful childhood.

But what if they don’t have those things? Will they really miss out? What if we just stayed home on Saturday instead of running all over town looking for the coolest new activity? What if I just let them watch TV after school? What if we don’t go to the pumpkin patch this year? What if I don’t buy class pictures (or school t-shirt or support the book fair or buy school fundraiser cookie dough…)? What if quality time with me means sitting with me in my lap while we watch TV (through the antenna, since it’s free) instead of me scouring Pinterest for a week finding the latest and greatest clever craft so I can blog about it? What if I just let the kids eat chicken nuggets and canned corn tonight instead of spending all afternoon on unprocessed super foods that I’ll have to force them to choke down?

That big ole fat word JUST gets in my way a lot. I have a great fear of mediocrity. As a child I remember longing to be famous because I somehow thought my life would mean nothing if no one knew who I was. From a young age I’ve been driven to be more than “just” a normal person living life.

I’m a big believer that life shouldn’t get in the way of living. In the last five years of my life I’ve had a LOT of drama to deal with. Two kids 16 months apart, divorce, single motherhood and working full time while living with my parents, DATING as a single mom (terrifying), endless baby daddy drama, endless baby mama drama (don’t get me started), financial ups and downs, MAJOR job and life changes, stepmotherhood (and I thought being a single mom was hard), and the list goes on and on and on. In the midst of it all, I’ve been determined to not “just” be the sum of my own drama.

I’ve managed to achieve some pretty incredible memories in the midst of it, and according to most I have pretty smart and well behaved kids. I must be doing something right…right? I’m glad that I didn’t just lie down and take the blows life has handed me and I think I’ve grown because of my determination to succeed and enjoy life in spite of difficulties. But I think I’ve simultaneously set the bar really high for myself. In some ways I’ve exhausted myself and overachieved in such a way that I have a hard time sitting still and relaxing because it feels lazy.

You know what I haven’t done this year? I still haven’t signed the kids up for extracurricular activities (honestly can’t afford the expense right now). I gave up on the Tulsa Run, and working out really hard in general. I realized that for all the stress I’ve put on my body and my schedule, I’m still “just” maintaining my weight and not really making myself happy, so I threw in the towel and have opted for walking the kids to school and taking them to the park instead. I’ve given in to more “lame” dinners like casseroles and plain old spaghetti and I let the kids veg out and watch TV when they get home from school more.

And you know what? Life ain’t bad when you’re “just” living. In fact, I realize more and more JUST how good I have it. Without all the expectations of being more, I see all that I am and feel pretty confident just being me.

On that note, if you’re feeling bad about not having a fancy costume for Halloween tonight, or waiting till the last minute and seeing slim pickins at Wal-Mart, you’re in good company. I had high hopes of making the littles’ costumes by hand this year and have long since given up on it. And I’m pretty sure I’m dressing up as “just a mom” this year.

We never did make it to the pumpkin patch this year, and because we waited until yesterday to get pumpkins at the garden shop down the street, they gave them to us 75% off! Apparently it pays to slack! 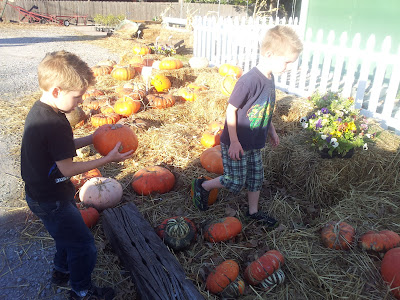 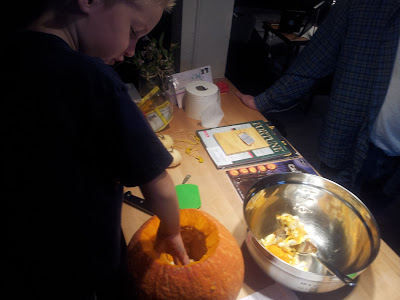 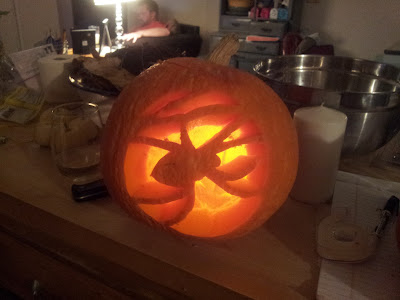 Those pumpkins may not have come with a pony ride, hay ride, corn maze or pictures with a camel, but they still carve just fine, and I think my kids are “just” as happy.

Here’s to mediocrity and JUST being yourself. Happy Halloween, friends!

See you around town,