In fifth grade, I had the privilege of being a “villager” in my school’s production of “Fiddler on the Roof.” My primary memory of this experience is the huge, hopeless crush I developed on Tevye, a senior (who happened to be dating Tzeitel…); rehearsing the Tevye’s dream sequence, which involved donning a white sheet and doing our best ghost impressions; and, in a rare moment of out-goingness, belting out all the words of “To Life!” on a small stage along with a handful of other extras while the pianist rehearsed before a performance. For a moment, doing my best to channel my beloved Tevye, I felt like the star of the show, and it was fantastic.

Also, my mom, a violinist, was the off-stage Fiddler, which was pretty awesome.

So overall, it was a great experience–one of my last positive, elementary-school memories before heading off into the horror that was junior high.

I was therefore excited when Celebrity Attractions offered me the opportunity to interview a cast member of “Fiddler on the Roof” before their run of performances at the Tulsa PAC, June 18-23. (TulsaKids is also giving away a Family 5-Pack of tickets to “Fiddler” as part of our Father’s Day Giveaway package…enter here  through June 11 if you’re interested!)

I ended up interviewing Maite Uzal, who plays Golde in the production. Uzal is originally from Spain and is a versatile actress who has done everything from dramatic roles to starring in a bilingual kids TV show called “Trash Bash.” She also has a law degree–but more on that later! Uzal has been touring with “Fiddler” since last October–rehearsals started in September, and I was so impressed by her dedication to and research into the role of Golde.

Note: I was typing out Uzal’s answers as I listened to her speak, so this might not be a verbatim transcript, but it’s close! (Thank goodnes for Mavis Beacon!)

TR: What do you enjoy most about playing the role of Golde?

MU: I don’t think I could tell you anything that I don’t like, actually; what I most like is I think it has every color you could play on stage—it has all the comedy and the drama and everything in between. I get to explore many different emotions, and I work with an amazing cast and crew, and that certainly helps Golde every night to do what she has to do on stage. So this combines everything; like when I did “Death of a Salesman” or…the kids’ show, I was staying so-to-speak within one color…but this combines everything. This role has every single color, or for me the most varied aspects of a human being that I’ve been able to play so far.

TR: I see in your “Fiddler” biography that you are dedicating this role to your mother. What does this mean to you? In what ways might your mother have been similar to Golde, or do you see her experience reflected in “Fiddler” at all?

MU: I wanted to honor her playing this role because I think that Golde has helped me [understand motherhood]…My mother and myself are living in very different times than what Golde lived in, but I think there are common traits to motherhood. She is “The Mama”—that’s how she’s introduced—not as Golde. The first thing you learn of her is that she’s a mother and what her duties are as a mother, not really as anything else. So [through this role, I’ve been] exploring what it means to be a mom.

I first wanted to honor my mother because I think she’s been a key element in me being where I am right now. I would not have been able to be where I am right now if it hadn’t been for all the hours she waited for me while I was taking ballet and piano lessons. In exploring what the mother means, I have come closer to her. That is something that’s been quite lovely about playing this role. This has strengthened our relationship because I’ve come to ask her questions that I wouldn’t have asked otherwise at this point in my life because I’m not a mom.

In playing a quintessential mom, I have to ask myself many questions that I’ve had to share with her, and that got us talking about things that have never been brought up otherwise. For example: I did ask her if she thought, for example, if the way she directs attention and the way her brain classifies priorities and even sees the world changed form the day before she gave birth to me and the day after. And she talked to me about lots of changes that your body goes through and your senses, like your most primary instincts go through once you have a child. And which for her were totally unexpected, and I’m guessing for Golde were even more so because we have access to more research now, and she was illiterate, so she didn’t have access to information. So to really try to understand all those changes.

TR: One theme in “Fiddler” is traditional and changing gender roles; set in 1905 and first produced in 1964—in what ways do you see this theme still being relevant today?

MU: Yes, I think that every mother or father or person in charge (in terms of being an adult in regards to other young people that they care about), …still remains in every single parent and caretaker in the modern world, even if they’re not as traditional as they were back in 1905. Those feelings of putting the other person first, gearing your energies toward their well-being, I think all those feelings are universal and apply. And I think the conflict between old ways and new ways, whatever those may be, are still relevant.

TR: Since “Fiddler” is coming to Tulsa in June, and we are giving away some Fiddler tickets as part of a Father’s Day giveaway, I wondered if you could speak briefly on fatherhood as portrayed in “Fiddler.” What do you think makes Tevye a good father and husband to Golde, and in what ways does he grow to be a better father/husband over the course of the show?

MU: Yes, Tevye definitely has a huge arc in terms of fatherhood and manhood, given that he also is “A Papa.” I think he goes through a journey of acceptance and “giving in”–fortunately not in a negative way–but giving in to love and to really looking into his daughters’ eyes. Until he actually comes to a point where the conflict is between his faith and his daughter Chava. And that’s where apparently…initially he cannot give in to that: choosing between his faith and his child. But even after the losing of that child, which is the equivalent of having a child die—both for me, for Golde and Tevye, they are in mourning over the life of a child. But even after that, I think he still [comes to] an even greater amount of tolerance and understanding and love, and that’s when he gives this answer to Chava that is hopeful, that not everything is lost. He has a lot to digest and process. He’s a dad, but he’s also a very religious man, and that’s part of being a father—studying the books, preserving traditions…and providing for the household.

TR: In light of the recent Tree of Life and California synagogue shootings, as well as other anti-Semitic activities covered in the news, what does it mean to you to be able to portray a story about a Jewish family facing persecution?

MU: We’ve been deeply saddened to hear that those events happened of course, and it has really brought us even more together in our sense of responsibility to tell the story and even more attentive toward the exploration of our characters. And I think it has strengthened and deepened everything we do in how we approach our characters and how we approach each other. Because when something like this happens, you have to love each other even more. And that’s just across the board: the cast, the company, and everyone involved in the touring experience. And the immediate response is, “How can we help?” And that responsibility just brought another layer of relevance to our story. Sadly.

TR: You also have a law degree. Can you tell me about balancing your work as a lawyer with your work as a touring actress? [I asked this question because we were planning to have a Parents Meet-Up with Dr. Meg Myers Morgan on May 22; Dr. Morgan wrote “Everything is Negotiable,” and one of her points is that women should quit feeling like they always have to choose between one thing and another–for example, to be a mother or get a degree. So I was curious if Uzal was able to balance these two different careers!]

MU: I was a corporate lawyer, a litigator, and at the time was a part of an amateur musical theater group. Since it was an amateur group, it didn’t matter if I skipped rehearsal. Being a lawyer, well, I guess you can do both [law and acting]; I don’t think you have to choose, but the matter of fact is that many, many actors have several jobs. But I don’t think that there are many actors who are full-time attorneys because that requires a lot of hours to be devoted to that. In my case I did choose [acting over law] because I didn’t study law because I chose to do so, it was for my family’s expectations. As soon as I could, I switched to acting because that was what I wanted to do. There are extremely smart and organized people out there who could do both. But specifically with law and acting, I’m not sure.

TR: Was your family supportive when you eventually chose acting over law?

MU: At the beginning, my dad was not, and I understand why he wasn’t because in his mind and his view of the world, that wasn’t a good choice to him. If you see your kids doing something you think is not good for them, I understand being opposed to that. But then eventually he did come around and I know he’s proud of me. around. He passed away five years ago. He would never tell me, but I know he was.

TR: I see you worked on a kid’s television show. Can you talk about that at all? How is performing for an audience of children different than performing for a more mixed audience?

MU: First of all, I think that sometimes we do underestimate what a child can understand. Sometimes they get things that we don’t get. We have established opinions about things, while a child is more free to enjoy the artistic experience. When we did the kids’ show, we had very specific objectives that we wanted to cover in terms of what we wanted to teach, so we geared the script and every part of the show toward that–Towards not being afraid of making mistakes, laughing at your own mistakes, using your imagination and all of that, so we did of course customize every part of the show. But aside from that, and obvious things like the use of language and the use of some of the artwork, we never thought, “Oh, they won’t get this, or they won’t get that,” and I actually think that the show that we put together was a show primarily directed to kids, but we wanted kids to be able to enjoy that with their whole family. But I think it’s very common that a good kids’ show will be enjoy with the whole family. 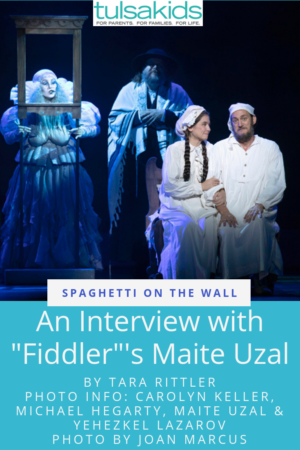 Holiday Guidelines from the CDC:

Saying Good-bye to My Best Friend

The Unspoken Truth Behind Thanksgiving