Back in Our Day…

Many aspects of child rearing have changed since I first gave birth 30 years ago.

I had to walk 5 miles each way, in five feet of snow, to get to school. A cup of coffee used to be a nickel. Back in my day, we raised our kids differently, and they turned out just fine. Yes, I’m getting older, but I don’t want to be one of those grouchy old people that is always talking about the past. It’s in our best interest to continue to learn and, even more difficult, accept the inevitability of change. Since my daughter gave birth to my first grandchild a month ago, I have been acutely aware of how child rearing has changed in the thirty-year lapse since I had my first child.

There are many practical and important changes in the realm of child care and safety. One of the more obvious is in the way we place babies to sleep on their backs now instead of their stomachs, a tough habit to break for many grandparents. This alteration in sleep position reflects scientific findings to help reduce SIDS. Another safety focused change is placing the child car seat in the backseat facing the rear. The American Academy of Pediatrics recommends they stay in a rear facing car seat until two or three years old.  The crib I carefully put away in the attic after my last baby reached toddlerhood can now be used for firewood as it no longer meets any of the safety standards. You can also forget the cute bumper pads, blankets and stuffed animals our generation of parents placed in our kid’s cribs. Despite how cute and stylish the cribs looked, we now know that to decrease the risk of suffocation or strangulation, absolutely nothing should be placed in the crib with the baby.  Pacifiers, once vilified for the possibility of delaying speech and causing possible dental issues are now thought to help reduce the risk of SIDS in early months of life. As I wrote in a previous blog, my husband and I attended a grandparenting class at the hospital and learned so much helpful information that helped prepare us for our grandson’s arrival. To read everything we learned, click here.

One of the other changes I’ve observed is more a reflection of changing social norms. When arranging a baby shower for my daughter and son-in-law, it wasn’t even a consideration that it be women only, as it was in our day. The baby has a mother and father excited for the arrival, and both parents were guests of honor at the party. There were a few grumbles of discomfort from the males of our generation regarding attending a baby shower, whereas my son-in-law and his friends thought it was the normal thing to do. When I accompanied my daughter and grandson to his first pediatrician’s visit I was pleasantly surprised to see so many men there. And they were not just tagging along with their wives, they were there with their children- without their wives. This was very rare thirty years ago. Women were almost always the primary caregivers, and men rarely did anything as mundane as taking kids to the pediatrician. It’s a positive sign of fluid gender roles, a beneficial change for adults and children.

Another very positive change I’ve seen is the help that is available for mothers that choose to breastfeed. Perhaps it was the perfect storm: a rural area, the era and the lack of Google and any social media that combined to produce a complete void in assistance when I chose to breastfeed thirty years ago. I lived in a very rural area in North Carolina, and when I told the nurses I planned to breastfeed they looked at me like I was an alien and replied,”We haven’t had anyone breastfeed in years; we have no idea what to tell you.” In fact, they started giving my newborn a bottle immediately despite the knowledge I was breastfeeding. I struggled through six weeks of attempting to nurse before giving it up in total frustration. Thanks goodness my daughter has had the complete opposite experience, beginning with lactation consultants visiting her in the hospital, her pediatrician’s office having a full-time lactation consultant on staff and the ability to chat with other breastfeeding moms on social media sites. It’s still not as easy as we’re all led to believe, and I certainly pass no judgement on whichever choice you make but it’s wonderful to have access to information, support and guidance! 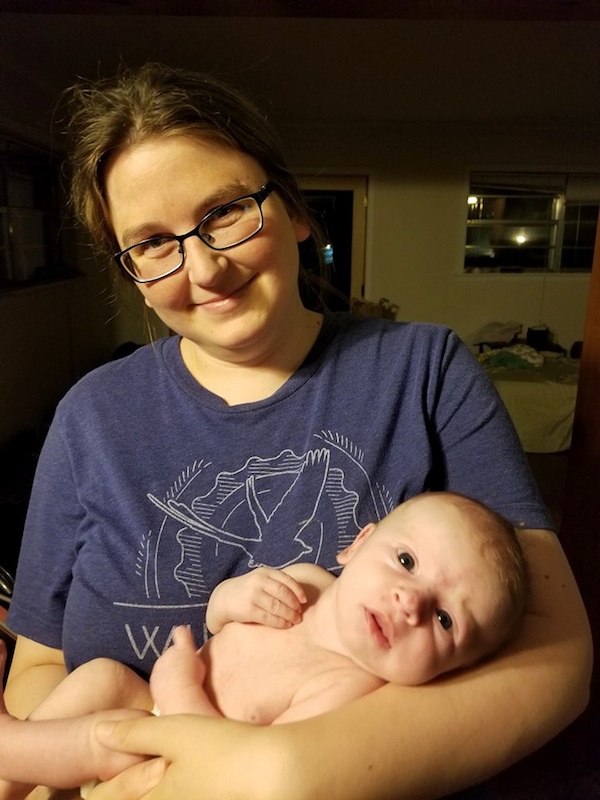 Sometimes it’s hard for grandparents to accept all the changes in parenting but it’s important to remember this is our children’s chance at parenting and we need to step back, refrain from criticizing (unless you feel your grandchild is in danger) and allow them to lead the way. In the four short weeks since my grandson has been in this world, my daughter and son-in-law have taught me many new things about child care. Rest assured, there are also many things that haven’t changed. The new parents need your assistance and your new grandchild needs plenty of cuddles and love!   Forget about thinking the old days are the best, progress is good, embrace the changes!