Arthur Thompson wears many hats: father, musician, teacher, author, entrepreneur and philanthropist.  His love of music began at a very young age while growing up in Tulsa. Although his musical talent led him on a journey to play in venues around the globe, it eventually led him back to Tulsa. Thompson’s passion and big heart are evident in his current projects that intertwine his love of music and working with children. 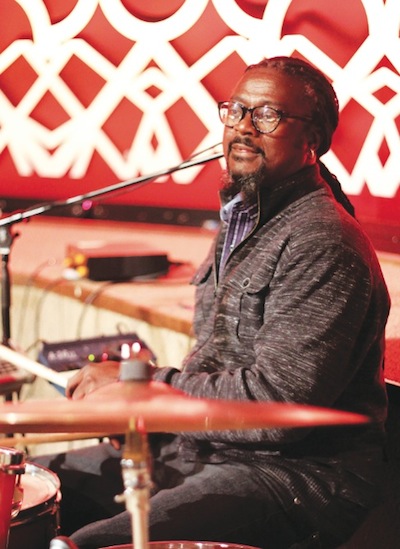 Thompson: It all began at the age of four. I would get my daddy’s wooden hangers and use them as drumsticks. I would play for hours on my mother’s pots and pans and on old paint cans. I would make up songs with my brothers. We always sang in the church choir and occasionally I would get to play the drums at the church when my older brother was away at college. At the age of 6 or 7, I was playing my drums at a church revival and it was there that I discovered my purpose in life was to be a musician. To be able to play in this manner, everyone — including myself — realized I had a true gift from God to play the drums.

TK: What did your parents think about your interest in music?

Thompson: My parents loved it and were very supportive. My mother always allowed me to practice my drums in the house, no matter how loud or how terrible it sounded!

TK: How did you embark on your music career?

Thompson: After graduating high school, I decided to attend The University of Tulsa. I quickly found out that college was not for me. So, I dropped out of college and continued to play at night clubs here in Tulsa. Shortly thereafter, I decided to take a chance and follow my dreams of becoming a professional musician. I bought a one-way Greyhound Bus ticket to Los Angeles. When I arrived, my father was waiting for me at the bus station. He looked at me and said, “What are you gonna do now?”  I told him I was going to get a job and pursue my music career.

TK: How did you start your musical tour?

Thompson: After securing a job in a warehouse loading trucks, I made a phone call to Renard Luke, a saxophone player my mother used to listen to while sitting in the park in Pamona, California. My mother had told him about me and we connected. Together, we formed a band called Monkey Meet.  After playing Hollywood Blvd., Sunset Strip, and colleges in the surrounding area, we decided to take the band on the road. Eventually we would spend 300 days on the road and play 280 shows a year for a period of six years. We performed in the U.S., Canada and Europe.

TK: How did you become involved in a group with Wayman Tisdale?

Thompson: Wayman and I knew each other as kids growing up in Tulsa. We would play music together at church and he would come over and play basketball in our yard. It wasn’t happenstance that we ran into each other at a George Benson concert years later in Tempe, Arizona. He and his wife Regina invited me over for dinner and that’s when he asked me to join his band called The Fifth Quarter. I began working for Wayman, not only as a drummer, but also as his personal assistant. At the time, he was still playing basketball for the Phoenix Suns. After retiring from the NBA, Wayman moved his music company back home to Tulsa.

TK: When did you discover a passion for working with kids? How did that change your approach to music?

Thompson: A few of my friends had young children who were interested in playing the drums. They asked me to teach them privately. During these lessons, I realized it was cool to pass on the language of drumming to others. So my approach to music changed as I began to articulate my drumming style and experiment with tuning and different ways to set up the drums in order to enhance my teaching skills. During this time, I began to create drumming programs the first of which was “Drums Speak.” I wanted children to have a way to relax, calm down, breathe and think positive thoughts. Over time, I saw how much this program helped others to transform their anger, depression and fears into something positive.

TK: How did your “Drums Speak” program evolve into co-founding the “Promises for Families Foundation”?

Thompson: I approached the Arts and Humanities Council of Tulsa with the (Drums Speak) program. We took this program to L.E. Rader Juvenile Detention Center and it was extremely successful. I was later approached by Camp New Hope, an organization that worked with the children of incarcerated parents.  I accepted this offer and it was life changing. While doing the Drums Speak program at Camp New Hope, I met Deacon Roland Rose from Midland, Texas. He asked me to bring the Drums Speak program to Promise Camp in Amarillo, Texas. I took the program to Amarillo and it was there I met my business partner, Katy Hoskins, and we started “Promises for Families Foundation.” This foundation also works with the children of incarcerated parents. Promises for Families is still in existence today and continues to serve families in Oklahoma, Texas, Colorado and New Mexico.

TK: You have developed various ways to incorporate learning through music including developing a special curriculum used by numerous schools and programs. What led you to develop your teaching curriculum?

Thompson: While giving private lessons, I noticed several of my drum students struggling to play rhythms that involved simple counting. I changed my approach and incorporated mathematics by changing music notes into numbers. I then began to develop my Math and Music Curriculum for students of all ages. The Math and Music Curriculum is designed to help kids learn math while incorporating repetitive auditory memorization by utilizing notes and scales.

TK: What are you currently working on?

Thompson: I am the Music Teacher and Band Director at Tulsa Legacy Charter School. I recently authored several children’s books, including The Professor Brown Series and my latest book Fables. I work with Power of a Nickel teaching my Math and Music Curriculum and sharing my Fables through storytelling to the children of Uganda. I am the drummer for Redeemer Covenant Church’s worship band. I continue to perform around Oklahoma with my trio Soul Cool.

TK: What is on the horizon for you?

Thompson: I am currently in the studio recording for my new project, Dr. Rhythm. I am also writing new Professor Brown books for the series and am trying my hand at writing a screen play.

To find out more about Thompson, where his band is playing, his musical curriculum, or non-profit organization visit:  arthurthompsondrums.com.