My Valentine’s Day plans this year were less-than-romantic, as Daniel had to work late, which meant hanging out with my favorite little adventure buddy instead! (Don’t worry, Daniel and I will celebrate soon!) This all worked out well because Discovery Lab was hosting a Members-Only Preview of their newest exhibit, Animation Land, on Valentine’s Day, so that made for some easy planning.

We did have an hour or so to kill between picking Joss up from school and the time the party started, which was the perfect excuse to head to the Tulsa Arts District for a sundae and egg cream at Ida Red. I mention this because it is one of my very favorite places to go for a treat, and the “soda jerk” working that evening was so kind to Joss, even giving him GOLD GLITTER on top of his sundae (which was very generously dolloped with whipped cream), an extra pretzel when he asked for it (which he enjoyed biting into different letter shapes), and a sample of orange-flavored cotton candy because he was more interested in the giant cotton candy machine than his sundae, to be honest. 🙂 So a huge thank-you to Ida Red and this particular employee for making our Valentine’s treat-stop extra special…and a word to the wise, if you want to leave your barista a tip at Ida Red, you’d better either have cash or let them know BEFORE running your card, as they don’t have a Square-type set up that lets you add a tip on afterwards. :*( 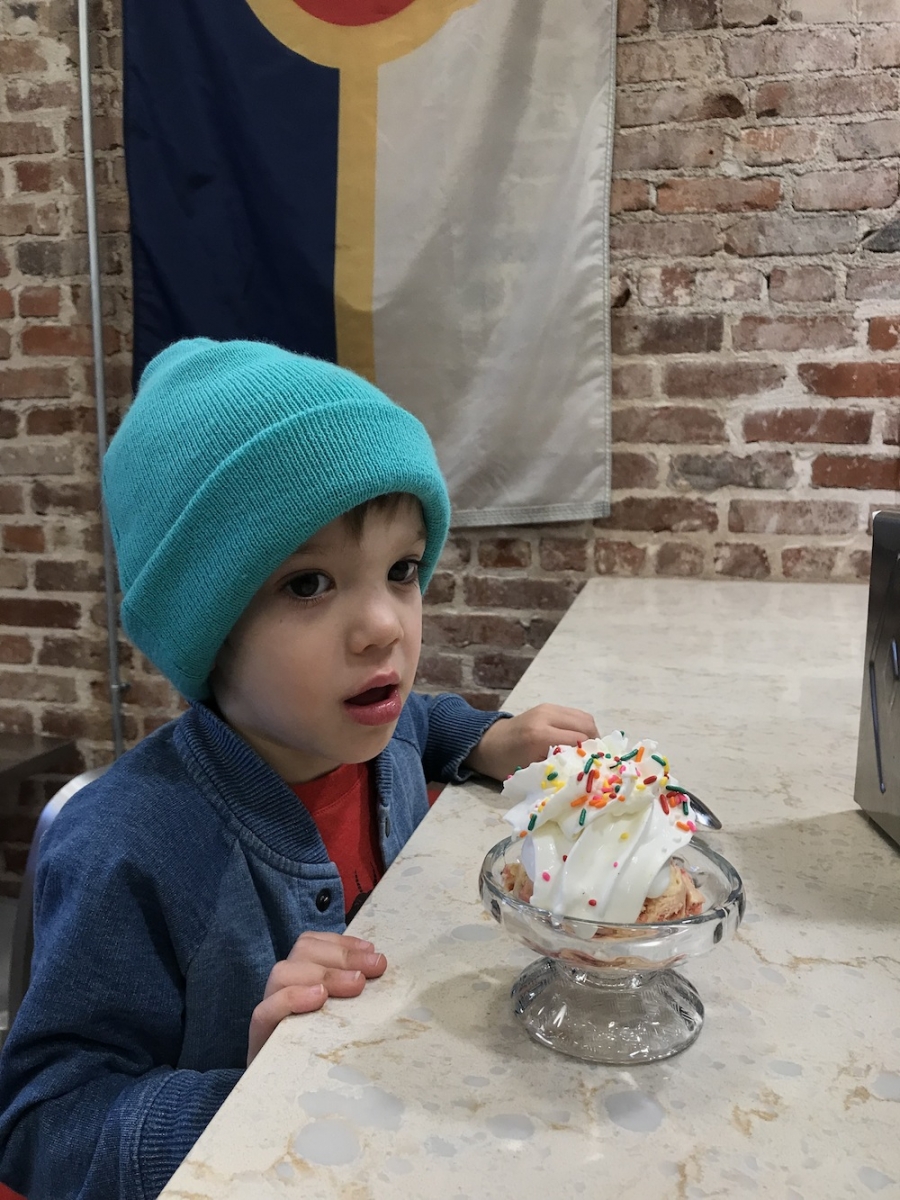 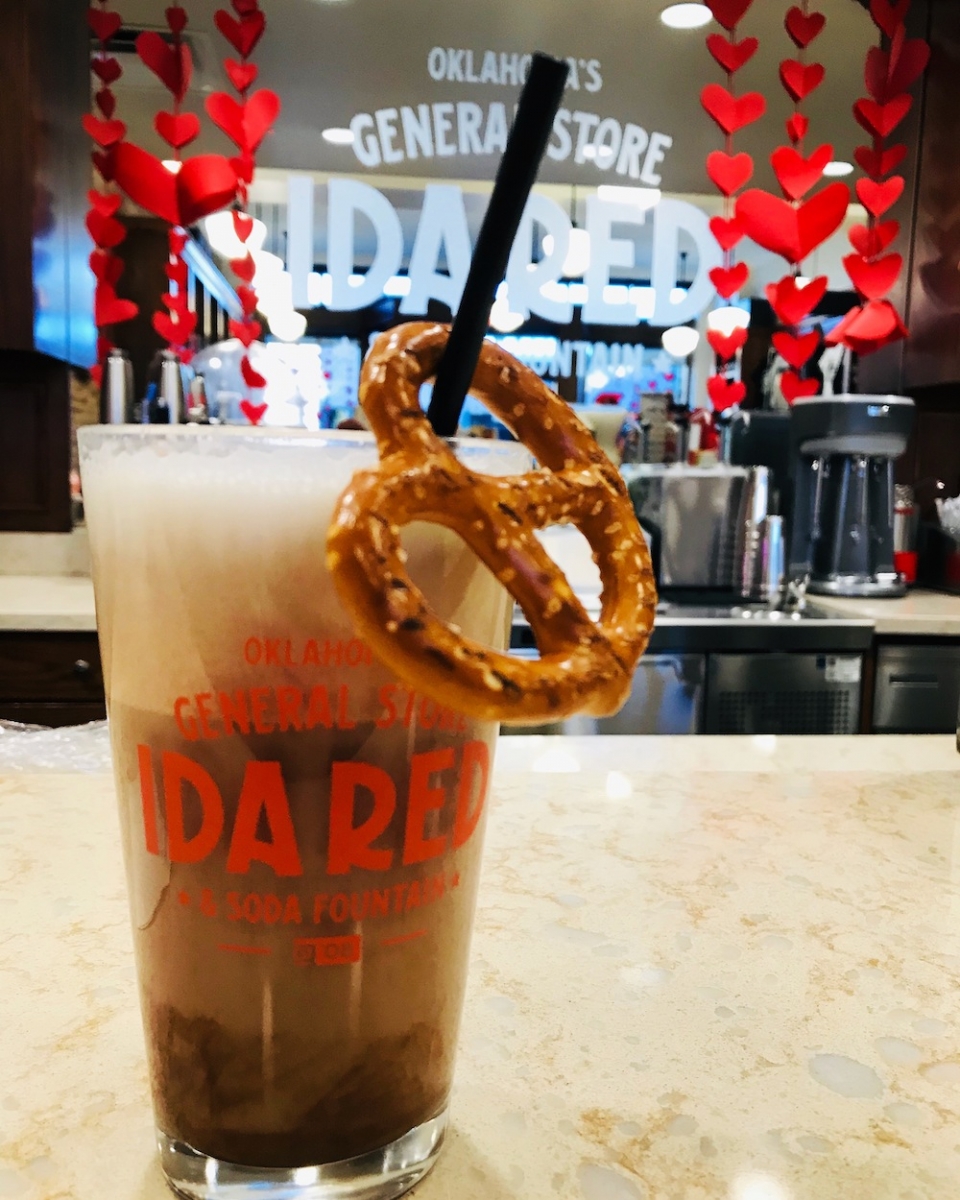 After fueling up on sugar, we still had some time to kill so enjoyed running around Owen Park for a bit, where the sky was looking particularly gorgeous that evening. 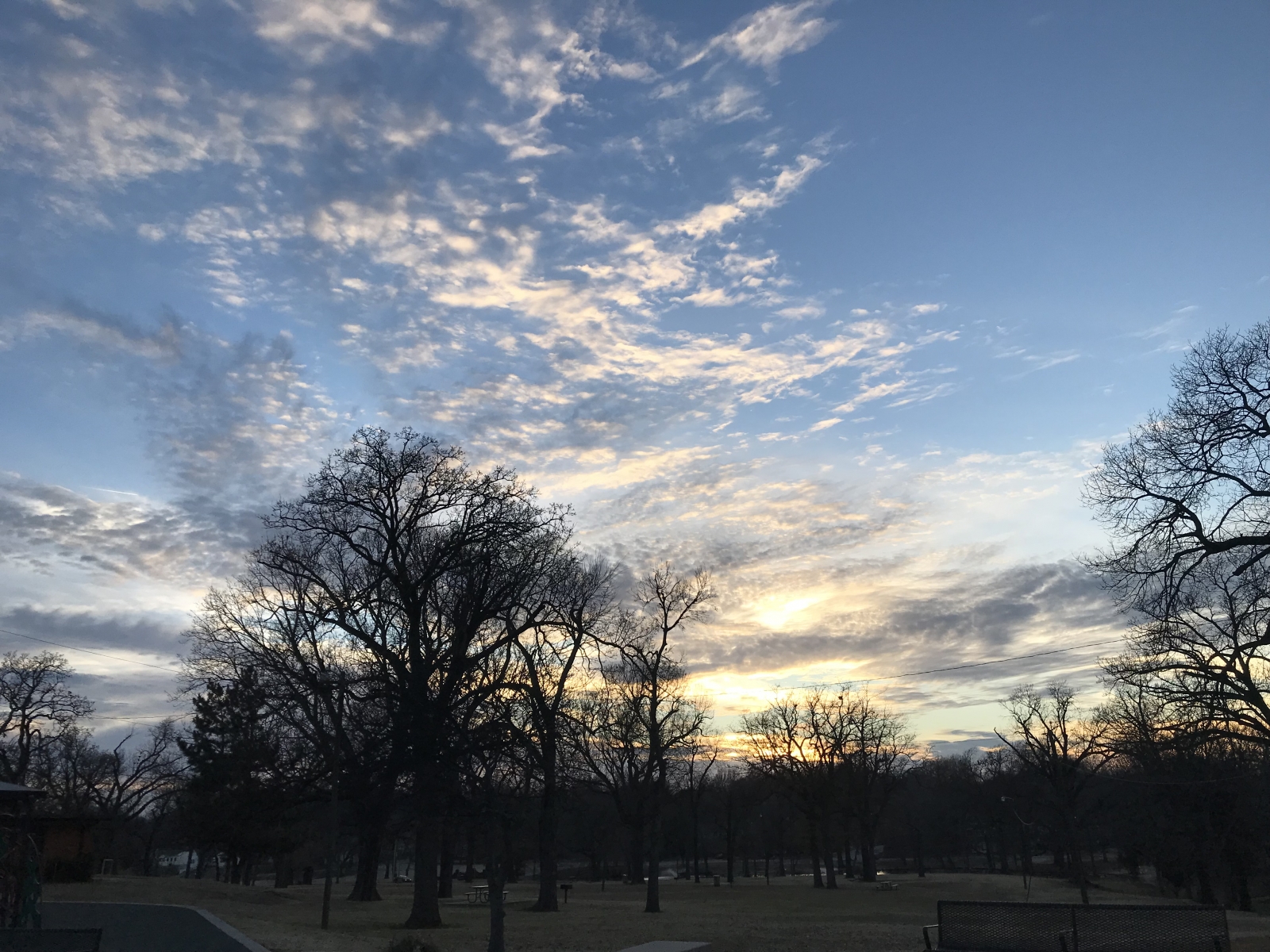 Finally it was time to enter the museum! Joss has been on a “bug kick” lately, reading and re-reading books about monarchs, stag beetles and ants, so our first stop was not to the new exhibit but to Backyard Bugs, which we’ve explored a few times now. There was a very helpful Discovery Lab employee in this section who invited us into The Workshop for cookies and to explain the various Workshop activities available for the evening: a giant sheet of paper you could draw on, which was being recorded as a timelapse video; a zoetrope; and make-your-own thaumatropes. All of which were related to the new Animation exhibit. Joss was mostly interested in the cookies. When he had finished, he took the employee to the bug room to introduce him to his favorite insects.

Eventually, I convinced Joss to go look at the new exhibit–which, thankfully, he also loved! It is bright and colorful, and I felt like the activities were good for a wide range of ages. For example, Joss enjoyed making some simple stop-motion videos that didn’t make a lot of sense, but older kids (and even adults) would enjoy the challenge of really planning out their video and creating a cohesive sequence of events. 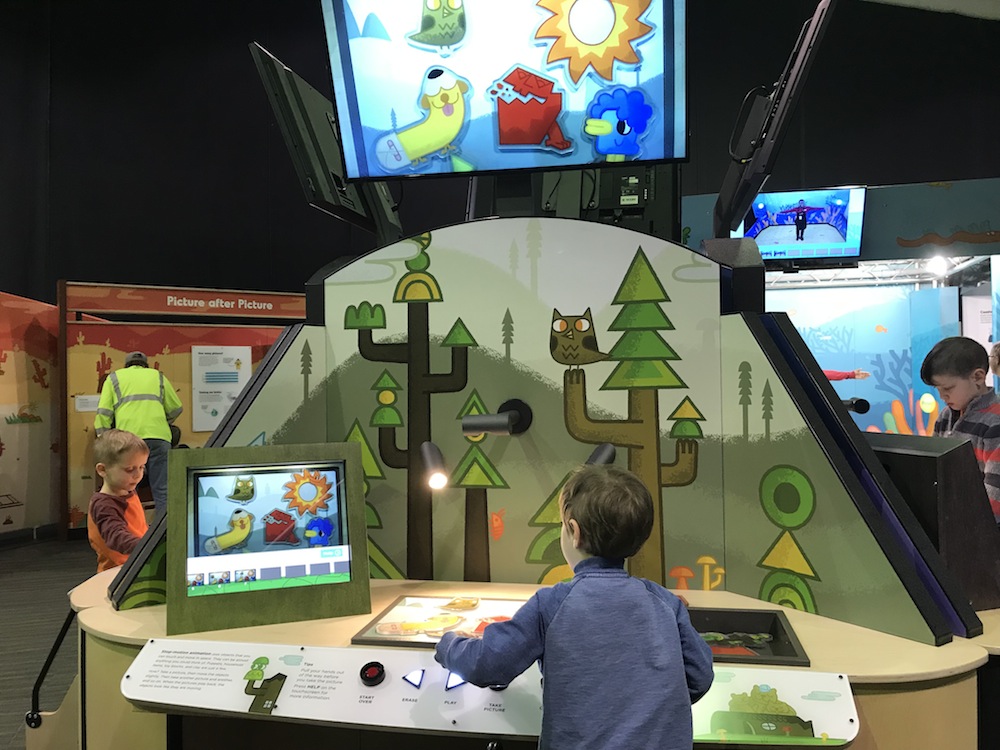 Joss at work at one of the stop-motion design tables.

One of my favorite parts of the exhibit, although we didn’t really get to explore it fully because it was a little busy, was the “Be a Foley Artist” station. It was set up with a panel of sound effect-producing items, such as a leather drum and xylophone, and a screen on which was playing a simple animation. After pressing the start button, you could watch the animation, which would prompt you to use the correct sound effects at the right time. Afterwards, you could press “play” to watch your completed animation, sound effects included! 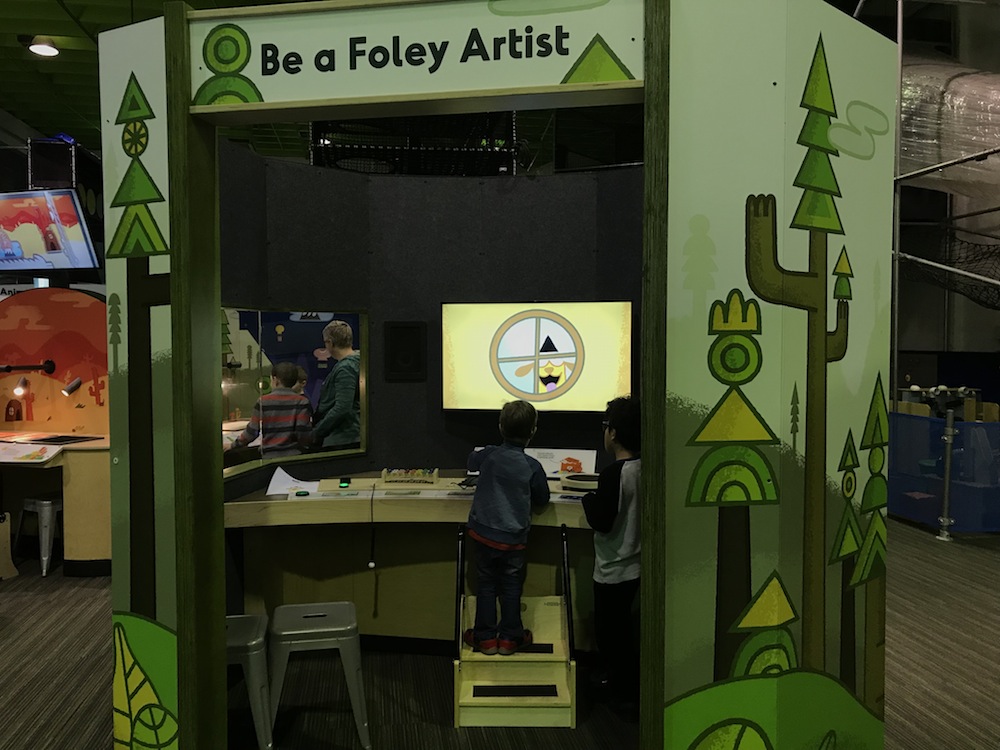 There was also a tracing station, where kids could trace character designs (Animation Land is populated by a group of characters, some bearing resemblances to animals, others looking like natural elements like a volcano), and then hang them up for display. 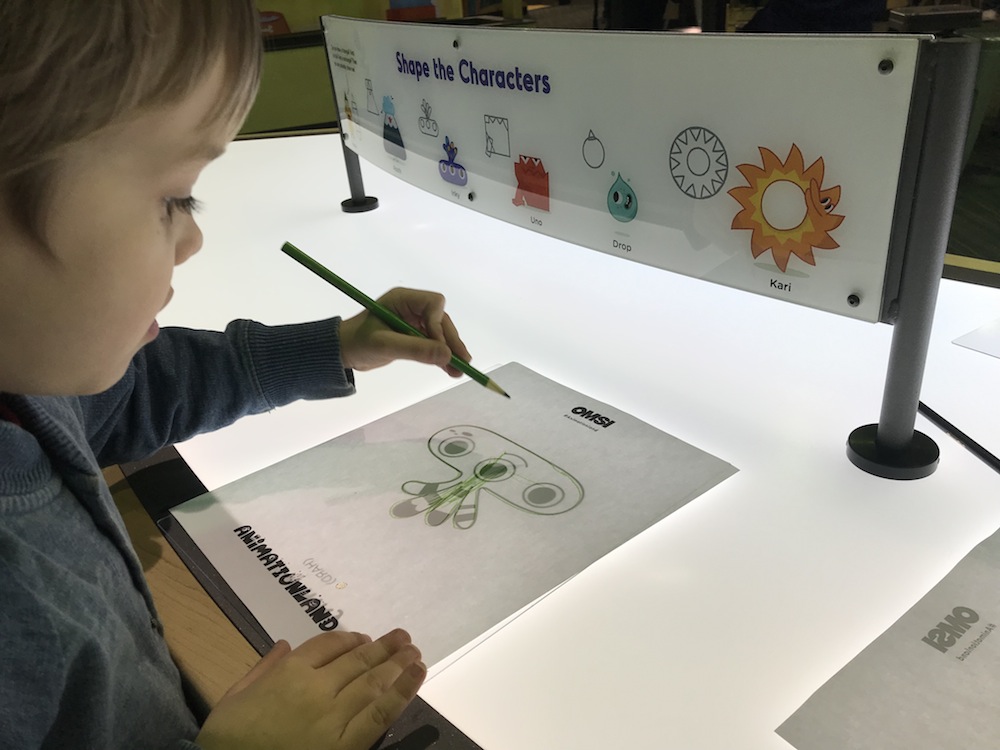 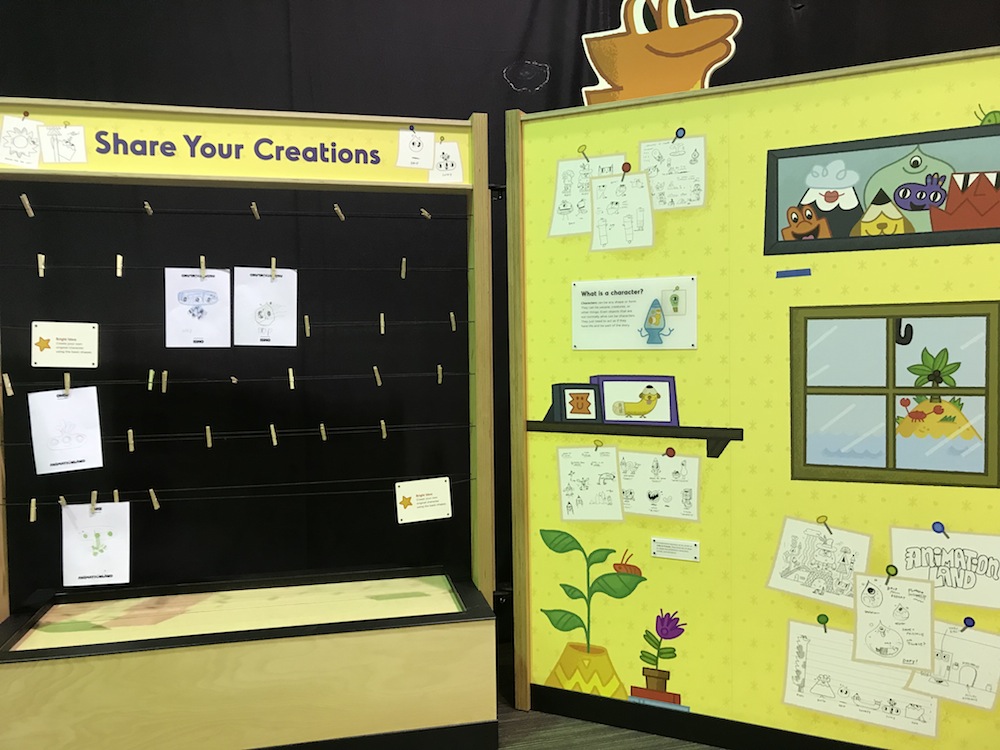 Next to the drawing tables was a Storyboard activity, which had 10-12 cards to choose from that you could arrange in a series of 8. These communicated with the Storyboard computer to create a video using your sequence of events! Again, this was something that was easy enough for Joss to do but that older kids would have fun with as well. 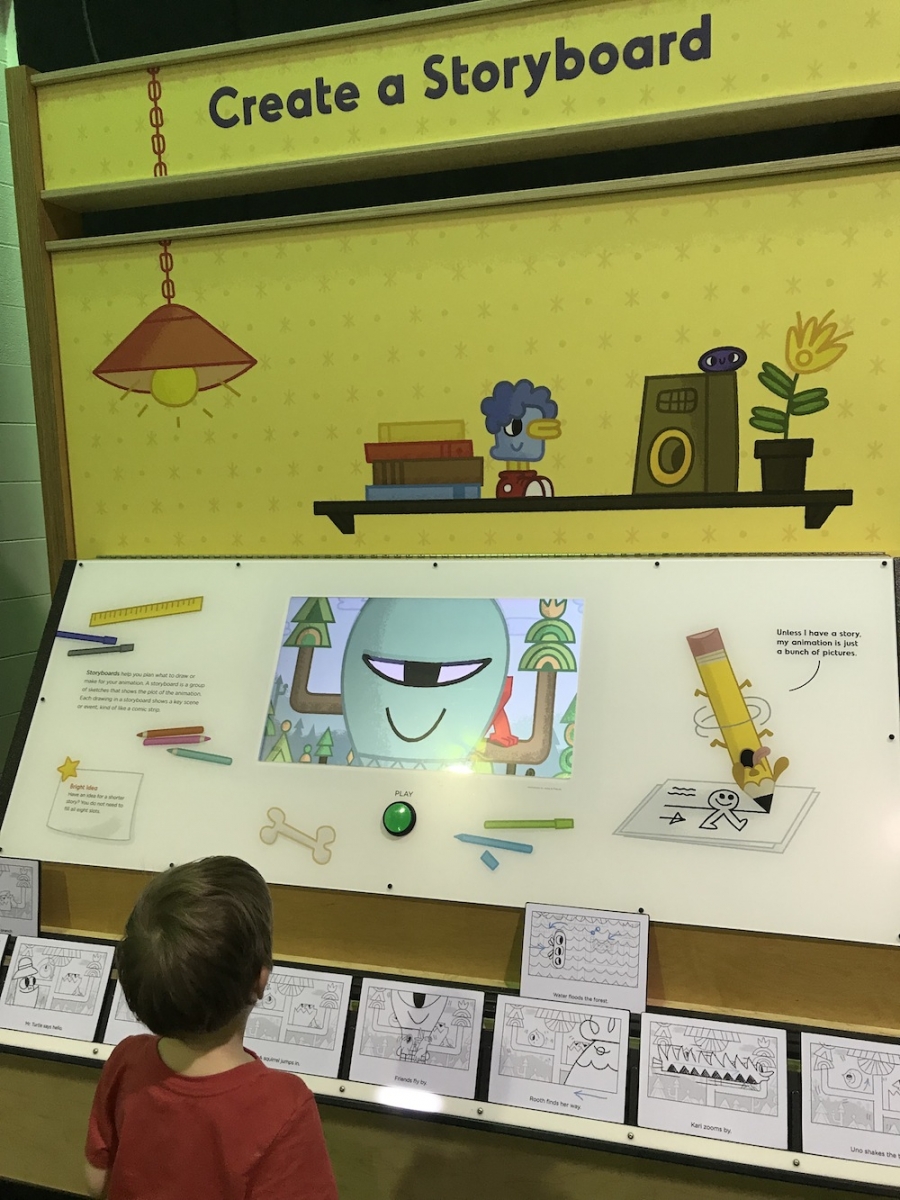 Of course, even with all these fun new activities, Joss still spent most of his time in the toddler section or on the tape slide! The toddler section is for ages 3 and under, so he’s about to age out (although I frequently see older kids in there when it’s not too crowded…). But for now, he still loves the magnetic gears, busy board etc. 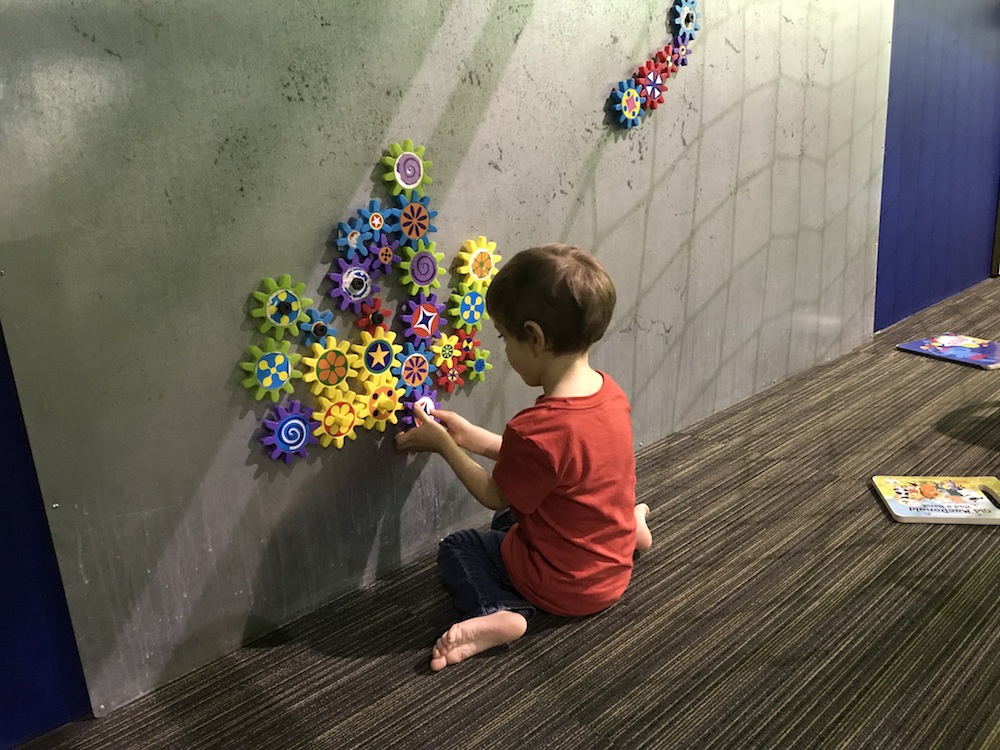 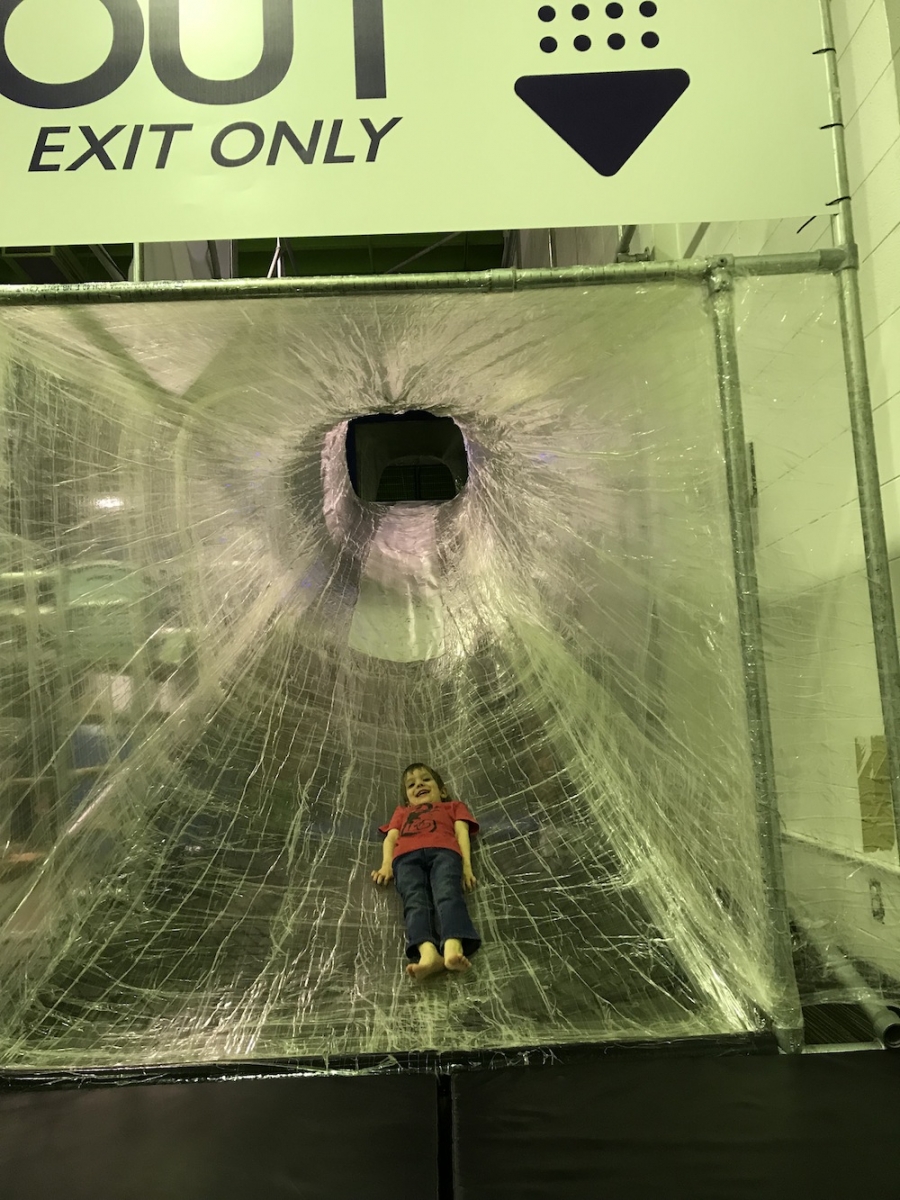 One final note: If you haven’t been to Discovery Lab in the last month or so, they’ve built a cool new entrance to the tape tunnels that involves climbing over moving barrels and hanging ropes! I made Joss hold off on trying it out since it was busy enough I figured he might get overwhelmed by himself–and narrow enough that I didn’t want to attempt climbing over those barrels with other kids around! Looked like a lot of fun though. 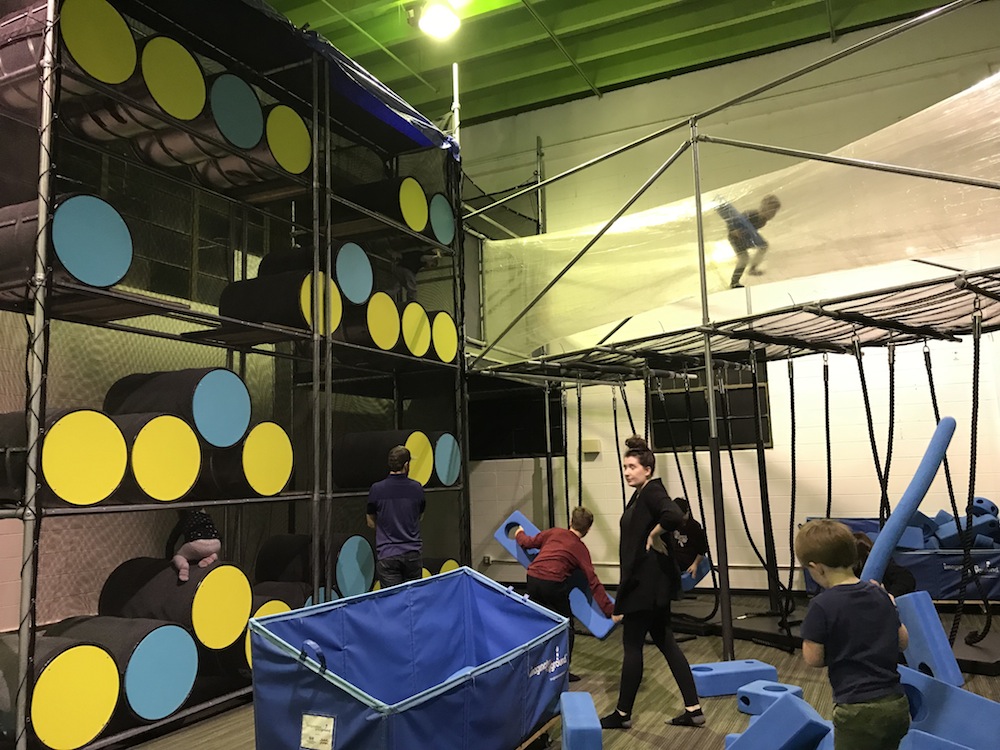 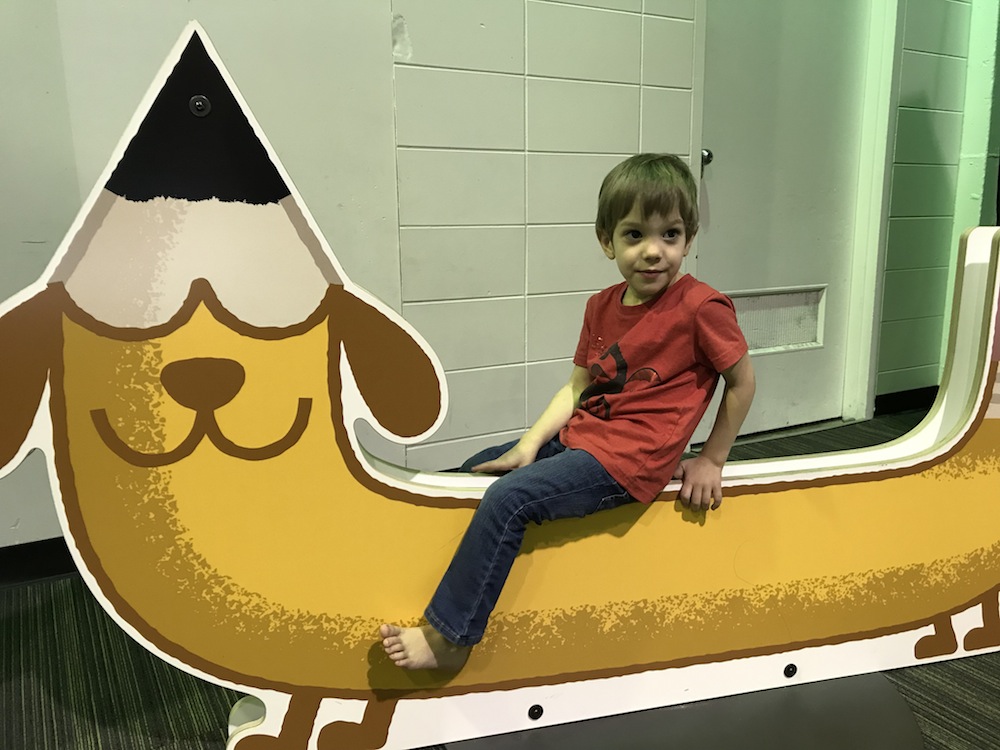 One last photo of one of the Animation Land characters. I believe her name is Tracey 🙂 I’m not sure if you are supposed to sit on her.

Animation Land is going to be at Discovery Lab for about three months, if I remember correctly. So plan your visit soon! 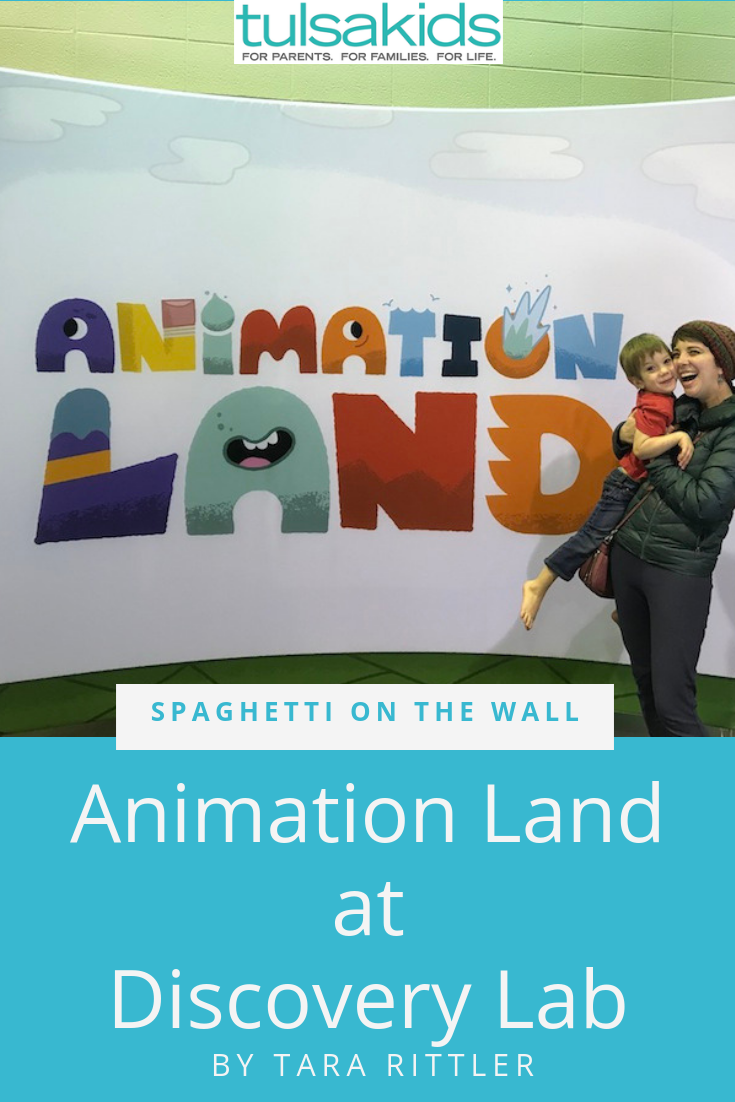