A parent crowdsourced ideas for April Fool’s Day foods in a Facebook group, and I thought – I have to remember this! Growing up, we always greeted April Fool’s Day with rag pancakes (small pieces of rags camouflaged in the middle of pancake batter). Salted apple juice was another classic. And of course, on the non-food side, short-sheeted bedsheets. Apparently, April Fool’s Day foods are now kind of a big deal, thanks to social media. So if you’re wanting to get in on the fake-out food train, here are some fun ideas.

Of course, this does remind me of the time we convinced a cousin that a bowl of pureed beans was chocolate sauce before she poured them over her ice cream. She didn’t think that was funny, at all! But you know your kids and what they’ll find amusing. And the best part is that these are all actually edible, and should be a big hit with the kids.

These recipes all appear to be either sweet or savory, when they’re actually the opposite! 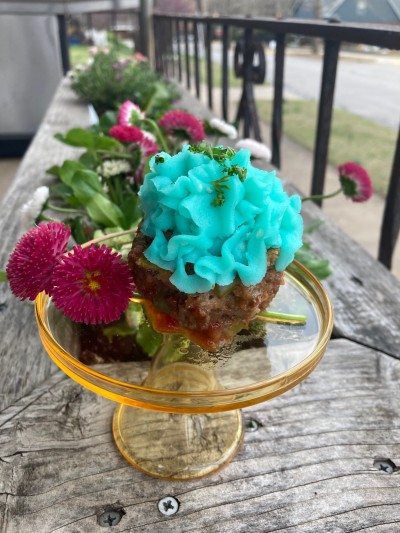 Bake meatloaf in cupcake liners. When finished, top with mashed potatoes! The illusion comes through best if you can pipe it on with a large piping bag, so it looks like frosting. Add food coloring to the mashed potatoes to really throw the kids off! Garnish with bacon bits, broccoli leaves, etc. I used this recipe, slightly modified (extra green peppers instead of onions, garlic powder instead of garlic, and added a little apple cider vinegar to the sauce. Oh, and instant mashed potatoes for the win!) They were delicious. 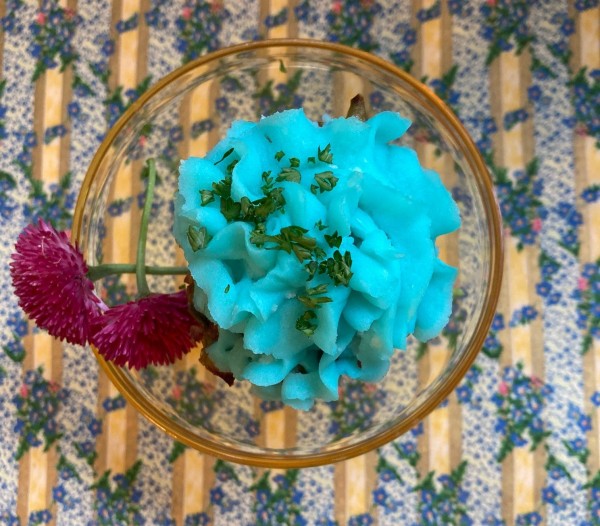 If you want to take it a step further, check out this Meatloaf Cake for Two from Taste of Home.

This is a super-cute idea from superhealthykids.com. Slice peaches about 3/4″ thick so that there’s a hole in the center of each slice once the pit is removed. Freeze peach slices for 30 minutes. Remove from freezer and dip into yogurt – vanilla, or whatever kind you like! Place yogurt-dipped peaches into a pan lined with wax paper. Top with nuts, sprinkles, cinnamon-sugar, whatever your favorite doughnut toppings are! Freeze for ten more minutes. Ta-da! 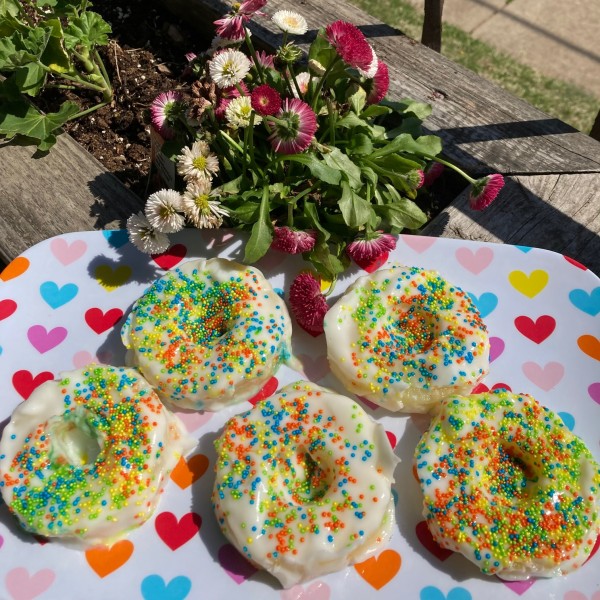 Because peaches aren’t in-season yet, I tried this with sliced canned pineapple. Just stack two slices on top of each other to get the desired height. Happy to report that these fooled both Joss and Daniel! And while Joss didn’t care to try one, Daniel was a fan. Plus, he doesn’t love peaches, so using the canned pineapple was actually a benefit. 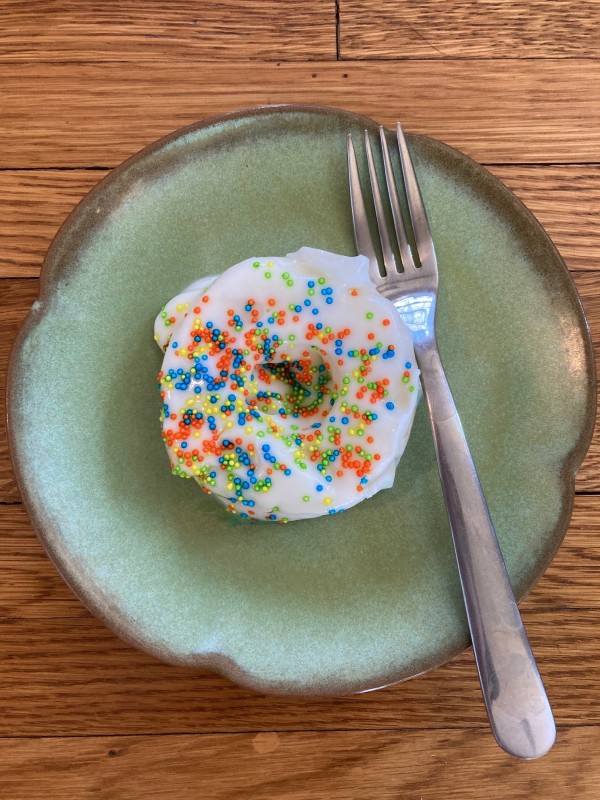 This recipe takes next to no effort, but the results are pretty spot-on, in terms of tricking the eye! Simply take thawed, frozen tater tots. Place them on a greased waffle maker in a single layer. Season as preferred, and cook until golden brown. Recipe from damndelicious.net. 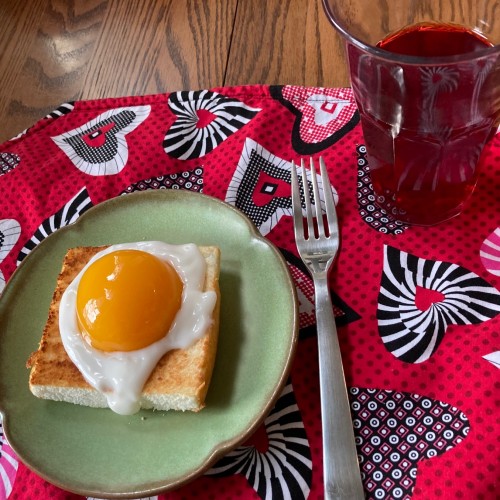 Bonus idea: Jello-in-a-cup! Looks like juice, but you can’t drink it! 🙂

Butter a slice of rectangular poundcake or angel food cake and toast in a skillet. Place on plate. Spoon vanilla yogurt over the cake so that it resembles egg whites. Top with half of a canned peach (the yolk). (Recipe here.) 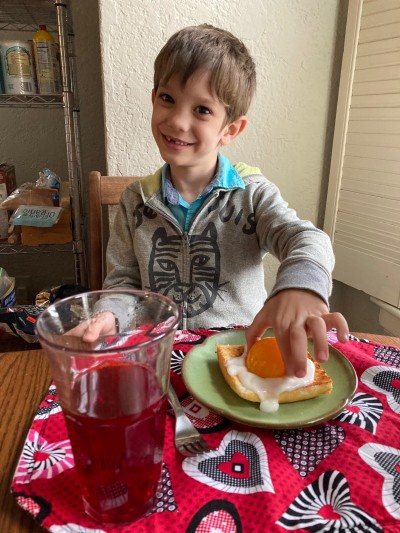 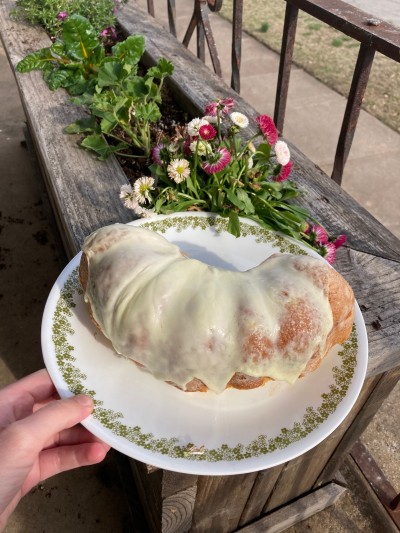 Several of these ideas come from tasteofhome.com because they have a couple of fun lists. I’ll link them below for more inspiration! But I had to give this one a try. 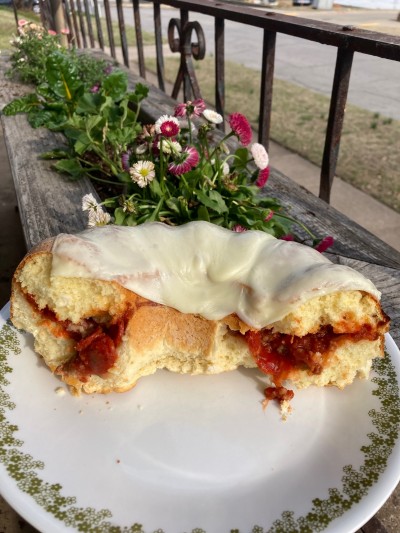 This biscuit layers were pretty thick. But I didn’t use all of the filling in the center because I was worried about overfilling. So it was possible to just spoon the extra filling on the side. It would be nice to think about a lighter savory bread that could be used instead of the baking mix. 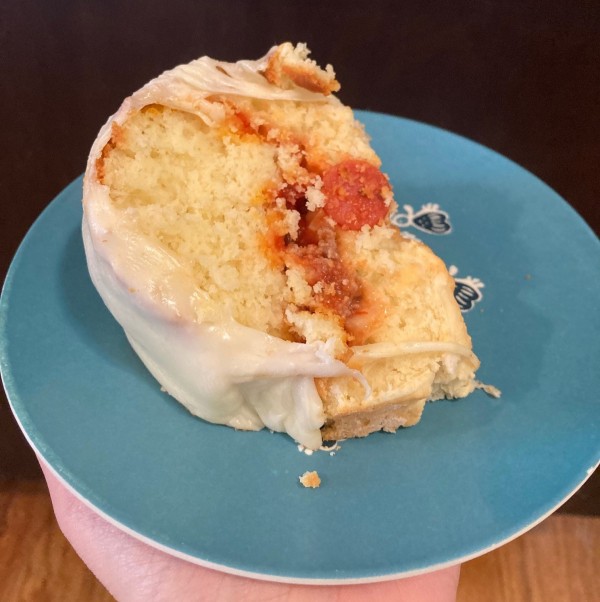 I love apple fries. To be honest, I’ve probably only had them one time, at the Tulsa State Fair. But that was after two years of wishing I hadn’t eaten so much already by the time I got to the apple fries booth. Since they look so much like regular fries, they’re the perfect April Fool’s treat! Try this recipe from Foodnetwork.com.

I have to include this because we actually made it the other day! Joss watched a YouTube video where they made candy sushi and had to give it a try. Use rice krispies treats for the rice, a green fruit-by-the-foot for the seaweed wrapper, Swedish fish and other candy for the inside. Warning: These are SUPER sweet treats! And also, although these are foods to fool your kids with, they might have a lot of fun helping make these! Watch this video for step-by-step instructions.

Recycle your Halloween treat ideas for April Fool’s Day! Here are three sweet and savory ways to make foods that look like fingers. And here are some other fun ideas for monster-eye meatball subs, spider pizza and monster teeth apple treats.

More Ideas From Around the Web

Do you have any ideas to add to this list? I’d love to hear about them! The thing I love about these recipes is that, even if they fake your kids out, they should still get eaten at the end of the day. Everything sounds pretty tasty! 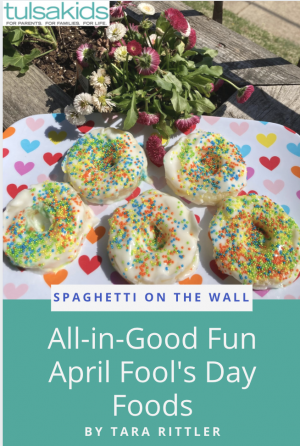