A View from the Capitol: Lost Play

Play is the first form of learning. By whimsically exploring our environment, we learn the boundaries and possibilities in our world. We should never stop playing no matter our age, because it’s one of the best ways our brain processes information. Late in September I attended an interim study on play-based learning hosted by State Representative Jacob Rosecrants. We spent two hours listening to experts talk about how play stimulates brain function, promotes social-emotional development and love of learning.

We also heard from early childhood teachers who talked about their own frustrations with the standards. They feel pressured to promote rigor and content to such a degree that it crowds out the old games and activities they used to use. State Department officials countered that. Play is in the state standards, but sometimes teachers get curriculum that crowds out play with extraneous content. For whatever reason, our classrooms seem to be changing.

“The reality”, said Becca Waggoner, director of the University of Oklahoma Early Childhood Institute, “is that play stations are being removed…We have gotten so far over to the standards side that we can’t see the play anymore.”

I was a high school teacher for 25 years before I became a legislator. I valued games, simulations, debates and other free-form activities as a cornerstone of my method. But then, I spent most of my career trying to dodge standards and directives from on high. This generation of teachers may not be so lucky. From my vantage in the Oklahoma State House of Representatives, I see the way standardized testing is linked to state report cards and tens of millions of dollars awarded to educational consultants. I can see why content and rigor now call the tune. But ask yourselves: Would you rather learn through a curriculum that included play or one focused entirely on test preparation?

I look at my own child, a sixth grader at Edison Middle School. He receives dozens of assignments every week in his virtual learning program. Dozens. When teachers are handing out and taking in assignments at that pace, there’s no room for play, for accidental discoveries or for taking advantage of off-topic opportunities for discussion. In the interim study, Horacio Sanchez, president and CEO of Resiliency Inc. and author of “The Education Revolution,” talked about the difference between the early engineers who worked for NASA in the ‘50s and ‘60s and the newer corps that came in in the ‘70s and ‘80s. The newer workers came from excellent schools and were great at calculation. But they had a harder time solving unexpected problems because they weren’t trained to think about the unexpected. In the classroom, when you set up a space for play, you are really giving young minds the permission and freedom to explore the unexpected and deal with the unanticipated.

I think we need to rethink how our system works. In this age of big data, we rely on test scores, attendance records and other inputs to determine how well we are doing. We are getting very good at keeping track of all this information. But in observing the phenomenon of school, we run the risk of changing the way young minds think in unfortunate ways. We may raise a generation of kids who know how to comply with directions but have forgotten how to play. And that’s not something teachers, parents or students signed up for.

John Waldron is an Oklahoma State Representative, husband, former teacher, and a dad to son Van. 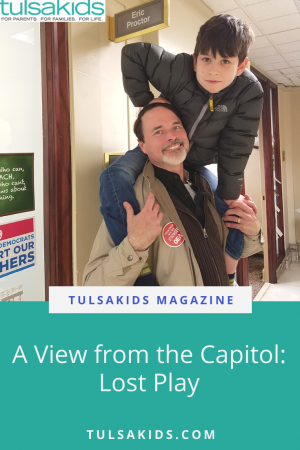