When she was 4 years old, Lesley Hemphill told her parents she was going to “adopt big people one day.”

The journey of becoming a family began when Lesley took a job at Life.Church’s South Tulsa campus and was charged with discovering local mission opportunities. Two weeks into the job, a man tapped her on the shoulder and said, “You’re new on the missions team? I’ve got something you’ve got to see.” Later that week, he introduced Lesley to the Tulsa Boys Home, a residential care facility in Sand Springs for boys who are either placed by the child welfare division of the Department of Human Services (DHS) or placed by parents or legal guardians in the Substance Abuse Treatment Program.

An Answer to Prayer

Lesley immediately felt a connection, and a few months later, she became a mentor. In September 2013, she was paired with Dakota, a 15-year-old who had endured 12 years of trauma and abuse before being placed in group homes by DHS.

“I felt like I butchered the first impression,” Lesley said of their initial interaction where she asked him his favorite subject in school (P.E., of course).

Dakota didn’t know it at the time, but this conversation was an answer to prayer. Jeff Johnson, the youth minister and volunteer coordinator at Tulsa Boys Home, recently asked Dakota if he believed in Jesus.

“I said, no, I have no reason to,” Dakota recalls. But, with Jeff’s encouragement, Dakota said a prayer: “‘God, you’ve got exactly seven days to send someone who cares. And if not, then you’re not real.’ In exactly seven days, he sent her.” 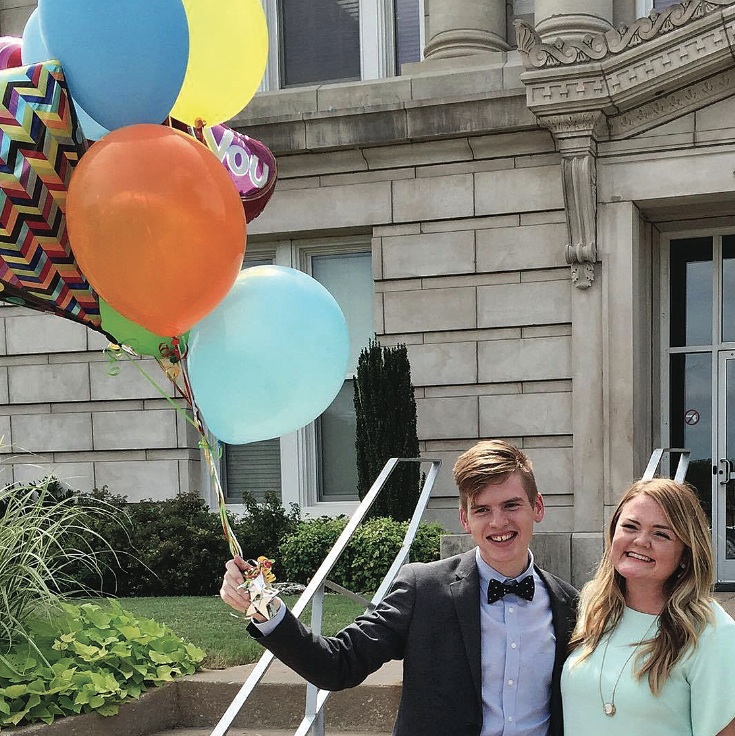 Dakota and Lesley began spending an hour together each week, often walking around the track at the Tulsa Boys Home. An hour led to a few hours a week, which led to daily visits. Although she didn’t begin the mentoring thinking about adoption, by late December, Lesley said she “started to think of Dakota as a son.” However, if adoption was the right path, she wanted his counselor, therapist and lodge manager to approach her about it.

“In March, I got a call from his therapist,” Lesley said. “She said his caseworker had visited, and they believed I would be the best placement for him in the state of Oklahoma and would I consider adopting him. I froze. This was exactly what I’d been praying for. I was kind of spooked.”

The adoption was actually Dakota’s idea. When a DHS representative talked with him about the possibility of sending him elsewhere, he told them his mom wouldn’t like that. Since all parental rights were terminated, the representative was confused.

After four days of weighing the pros and cons, consulting with her family and close friends, and receiving about 15 cards from Dakota with messages like, “I really want you to be my mom, but, no pressure,” Lesley filled out adoption paperwork.

The process was anything but smooth. Because of their age difference, DHS initially denied the adoption. However, Lesley said they reached a turning point when Dakota had a forensic evaluation. The evaluation confirmed that Dakota’s first maternal attachment, which normally happens in infancy, was to Lesley when he was 15 years old.

“At the end of her evaluation, [the counselor] recommended three things: if DHS and the court would approve the adoption, she recommended counseling, which we still do; as well as gradual transition into the home, and we did that,” Lesley explained. “And her third was that if they didn’t approve the adoption, they would need to take responsibility for the greatest trauma of Dakota’s life. It was really at that point that the judge and DHS said, ‘Absolutely, we’re all on board.’”

On August 12, 2015, the adoption was finalized. Dakota became a Hemphill.

“Grace has been a massive lesson,” Lesley said. “Grace from him—I’m learning how to be a mom in my twenties to a teenager. And I’m showing him grace as he learns how to be a son.”

Lesley said having a supportive community has been vital.

“There are just so many layers of people; the phrase ‘it takes a village’ is so real for us.”

“Once we said yes [to adoption], he said yes, and we became a family that instant,” Sherry said. “No turning back, no way will we abandon him. The surprise of the adoption process and procedure was how comfortable we all were together. The five of us are a family, period.”

Dakota is a student at Union High School and hopes to work for the Bixby Police Department one day. Although he has experienced much in his life—beatings, abandonment, losing his brother in a gun accident—Dakota is now experiencing some sweet firsts like owning a pet, vacations and being part of a true family.

Fostering Hope: How Your Family Can Serve Kids Through The Foster Care System

I Get Too Attached:

A Foster Mom's Reason Why