I am so excited to get to talk to you about a subject I know is the hot topic on everyone’s mind these days — homeschooling! OK, maybe that is a bit of a stretch considering homeschoolers only make up about 3 percent of the population, but bear with me. I believe the ideas behind the why and how of homeschooling are issues all parents have to confront at some point along the way. For me, homeschool came into the picture when I needed to advocate for and assist my children in a way no one else quite could. This idea, and others tenets of the homeschool experience are what I hope to connect with all of you on in this column. But first, I thought you might like to get to know me by hearing a little of my homeschooling journey so far…

My first encounter with the idea of homeschooling came 18 years ago in the form of a cute, rebellious, blonde boy. I’d not known a single homeschooler before then. When I met my husband and observed his symbiotic relationship with education I was intrigued. It was nothing like that of my peers. There was a sense of personal responsibility for education that I didn’t fully recognize then, but would now say is one of my favorite byproducts of homeschooling. Now, granted, his life was unorthodox in many facets, school being just one of them, but years later I can see that the entrepreneurial spirit I admired in him was partly formed by his parents’ choice in how they educated their children.

When I welcomed my own child, I had a vague image of homeschooling in the back of my mind as a dreamy, institution-free way of life, but when kindergarten age approached, I wiped the clouds from my eyes and put that boy in school! Now, it wasn’t just my lack of confidence in going off the grid that weighed in that decision at the time. We had been traveling almost nonstop since Ezra was born, and I felt like it would be nice for him and for me to put down roots and make some friends, and it was! Plus, I had happy, magical memories of my own public-school upbringing and didn’t want to deprive him of any of that. So, with that, we spent three happy years in a great local public school and all was well.

Then I had a fourth baby. And my husband hit the road on tour. I was beginning to feel torn between my role as good little baby mom, and good school mom, and good wife and keeper of the family morale. We were doing OK, but not awesome and not as well as I felt we could. Still, we hung in there a little longer and all seemed right until child number two joined the ranks of school goer. If you met my second child, you would never in a million years pick out her to be the one to have school struggles. She is bright, well-spoken, and, in many ways, mature beyond her years, so it too me a long time to accept  that she had inherited the disease of Einstein and Richard Branson — dyslexia.

We didn’t know exactly what we were dealing with at first. It was just a constant stream of uncharacteristic stress and tears from my bright, beautiful girl, and I was at a loss. I tried to talk to her teachers to get more of an idea of what they were seeing and how best to work with them to help her, but in our case, this just wasn’t enough. Now, I don’t blame the teachers for being unable to solve all of our problems. Yes, this was a public school and the classroom was large, but she was also displaying coping behavior in school and not giving them much to clearly work with.

I really felt something deeper was going on, and some of it had to do with me. I had a big family, a husband with a weird job, and I came to the frightening conclusion that if I was going to succeed with my family the way I hoped, I was going to have to think outside the box. We finished school that May, and as I pulled out of that car line for the last time, I didn’t know where we were going, but I knew we weren’t going back. The road to homeschool was beginning to pave itself in front of me. 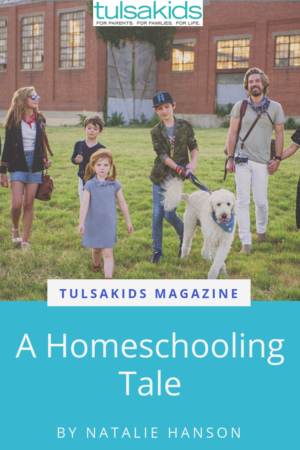