I wish I had a written record of my grandparents' stories and childhood memories; with this in mind, I've started keeping a "Grandmother Memories" book for Callister.

My dad loved to tell stories of his youth, his days picking cotton, his years in the Civilian Conservation Corps and later, living in Washington D.C and attending an inauguration parade for Franklin Roosevelt. His favorite tales were of his days in Africa while serving as a cartographer in the Army Air Corps during WWll. I remember stories that involved a terrible bout of malaria, witch doctors and riding camels. In retrospect, this all sounds fascinating, but I’ll admit, (with the appropriate amount of shame) there were times I was tired of listening to his stories and tuned out. How I would love to hear them again and share them with my children and grandchildren! Realizing my memory has blurred and in some cases erased the details of his stories has motivated me to leave a written legacy of my life for my children and grandchildren. I feel narcissistic thinking anyone will ever care to read about my fairly mundane (albeit happy) life yet my overriding thought is every life is important to loved ones. 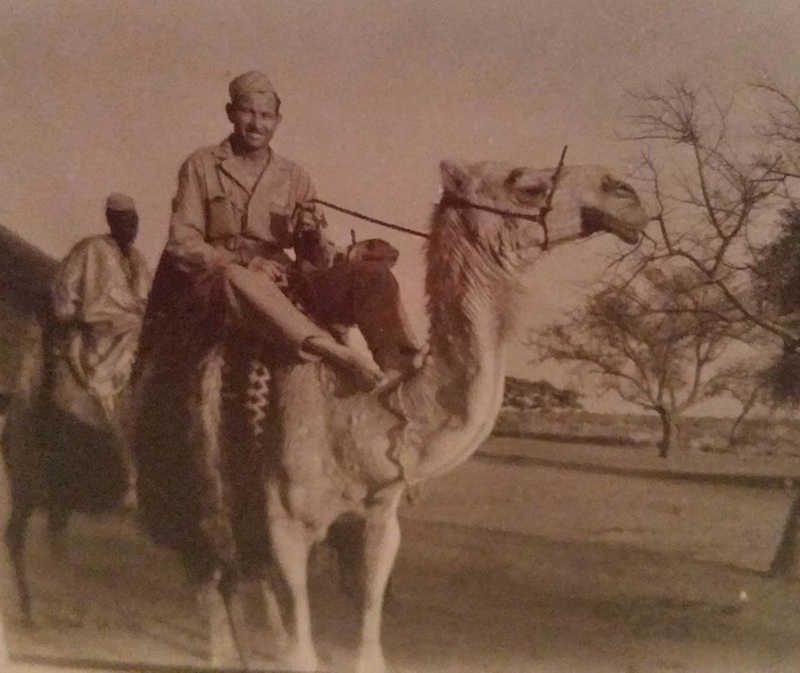 My father riding a camel while serving in the Army Air Corps in Africa.

A couple of generous friends gave me “Grandmother Memories” types of books as gifts when my grandson was born. These books make it easy with fill-in-the-blanks questions including topics such as the grandmother’s parents, her childhood and adolescence, world events during those eras, marriage, family traditions, the grandchild’s parents’ birth and childhood and the grandchild’s birth. In both versions of the grandmother books I received (I was thrilled to get two because I’m hoping to have two grandchildren and will give each child their own book!) there is also room for photos at the back. If you’re more of an independent thinker and writer you could design your own format and write a brief life history for your grandkids. Including some pictures ramps up the interest level and makes a nice visual impact, especially some pictures from your youth so they will be forced to believe you were once actually young. Although a video recording sounds desirable, I’m not going to recommend it because of rapidly changing technology. In the early 90s I undertook a project to help elders record their life stories on my trusty cassette player. I wonder if those tapes ended up in the trash now that the cassette player is practically obsolete. In my lifetime, we’ve gone from silent black-and-white 8MM films to VCR tapes, then DVDs and now online videos. Thirty years from now there will certainly be a technology we’ve never dreamed of, but a book lasts forever.

What should you cover in the book? To answer that question, I thought about what I wish I knew about my own grandparents. By the time I was thirty, I no longer had any grandparents, so my memory of them has faded considerably. The one grandparent that is most vivid in my mind is my maternal grandmother because she wrote long, chatty letters to me, often mentioning experiences she had in her youth. Reading about her life made her seem more “real” to me and helped me envision her as a person distinctly separate from her role as my grandmother. I would have loved to have heard more about her experiences being a child of divorced parents, an extremely rare occurrence in the early 1900s. I wish I knew more about what it was like to help her husband run a farm while raising four children and how they survived the depression. What experiences have you had that were important in forming your life?

My paternal grandmother was born in the 1800s and came to Oklahoma on a covered wagon during the Land Run! She died when I was very young, so I can only imagine the stories she could have told about her part in that historic event! You may think you don’t have historically significant tales, but step back and think of the things you have experienced in your lifetime: the assassination of JFK, technology changes, Oklahoma City bombing and 9-11, the passage of Title IX, and how these changes affected your life personally.

I’ve started filling out a “Grandmother Memories” book for Callister, but I have a long way to go. In addition to the form questions, I’m planning to add a letter every year on his birthday so he will always know how precious his life is to me. It may seem overwhelming and as I said before, a little self- centered, but your grandchildren will know you on a more personal level through reading about your life.  I hope they will feel a connection with their heritage and find a sense of continuity and security in the history of traditions through reading about their grandparent’s life. We like to think we’ll always be around, but the reality is one day we won’t be. My children and grandchildren may tire of hearing repetitive stories about my glory days and tune me out (sorry dad) but years after the sound of my voice is forgotten, a written history will stand as a legacy of love!