Thoughts about Meg Myers Morgan, PhD.'s, 'Everything is Negotiable'

I first read about Dr. Meg Meyers Morgan through Nancy A. Moore’s interview with her in the Green Country Grown-Up article of TulsaKids’ Sept. 2018 magazine. The interview focused on Morgan’s new book, “Everything Is Negotiable,” which was just released this month, I believe. What stood out to me from the interview was Morgan’s answer to the question, “Why do you think women need help in achieving the life they want?” She said,

“Women have perhaps been taught to see each thing they want in life as being in direct opposition to all the other things they want in life. I’ve had women say they couldn’t pursue certain career goals because they want/have kids, and I’ve had women say they wanted to get married but feared it went against their independence. We have to stop steering into this line of thinking. All the wants in your life don’t contradict the others; they complement them. Think of all your wants as instruments and assemble a symphony.”

While this was intriguing, it wasn’t until I missed her speech at Magic City Books–and saw friends posting about it, or posting about how sad they were to miss it–that I thought, “Huh, this sounds like a pretty big deal! I should probably read this book!” (Not that I ever need a lot of coaxing when it comes to a good book.) Thankfully, Betty had an advance reading copy of “Everything Is Negotiable” in her office, which she leant to me. I think I finished it over the next weekend.

The subtitle of Morgan’s book is “The 5 Tactics to Get What You Want in Life, Love & Work.” While I feel generally happy with my life, etc., I know for sure that I’m not a negotiator and that it took me an awfully long time to finally find a job/career path that is fulfilling and challenging. In other words, I knew going in that I would probably come away with some applicable advice (whether or not I actually apply it? The future will tell!). One fun thing about this book is that the 5 tactics are inspired by her girls–she credits them for teaching her the fundamental ideas of the book, and it’s pretty cool to read a mom’s perspective on how much you can learn from your kid, if you’re paying attention.

The following is some reflections on each of the 5 tactics–What I found most interesting and personally relevant.

Morgan begins this chapter by talking about the common perception that women are competitive with one another, and argues that we aren’t truly competing because NO ONE WANTS EXACTLY THE SAME THING. Rather, she says, we are comparing our lives with those of other women, “And that’s a much more dangerous thing because comparison sets arbitrary metrics for our life and often creates random deadlines for when life experiences should happen” (p. 5).

I think I’ve talked about my favorite children’s book on here somewhere, “Ping and Pong are Best Friends (Mostly),” a book about a penguin who eventually learns to stop comparing himself with his talented best friend, and to accept himself as he is. And I may have mentioned that this is my favorite book because I really struggle with comparing myself to others sometimes, mostly in terms of how outgoing and socially adept other people are, and how awkward I usually feel. So the idea that we don’t have to compete because we all have a unique path in life is pretty great. And the reminder that comparing ourselves to others only distracts us from our unique desires, path, etc., is a good one.

Tactic 2: Choose All That Apply

At the beginning of this chapter, Morgan writes, “It is crucial to understand that your life and career are not hanging on one substantial choice, but they are made up of countless smaller choices” (p. 60). Although I’m as guilty as anybody in the office when it comes to hemming and hawing over where we should eat lunch, I don’t think I spend a lot of time agonizing over choices or overthinking them (correct me if I’m wrong? Anybody?). I did think that I might give up on grad school after Joss was born (I was only three classes in at that point), but am eternally grateful that my advisor called to offer a GTA position, allowing me to continue grad school and make an income mostly working from home for the next two years. This alone convinced me that, as Morgan says, you don’t have to see having kids or going to school as competing desires. You can choose both. (At some point, I don’t remember if it was this chapter, she does mention that some of these things take a certain amount of privilege, and that’s true–it’s definitely going to be easier for some to, for example, go to grad school while having kids, or even go to college in the first place).

So one of the most relevant things, to me, in this chapter was “Choosing means asking.” Morgan recounted a story about a class who came to her (she’s the head of a department at OU-Tulsa) complaining about their professor, in particular, unreasonable expectations about a certain assignment. It wasn’t until after they’d turned the assignment in that one of them finally wrote to the professor, asking them to consider making changes in the future. The professor was happy to do so, but wasn’t sure why they’d waited so long to ask! I can definitely see myself falling into this cycle of complaining about something but being too afraid to approach it directly. Of wanting help but not asking for it. Actually, I probably already have. Ugh! Are there any areas in your life that fit this pattern?

Oh, yes. This is the one where Morgan talks about “Owning Your Narrative.” Perhaps you can tell, if you’ve been reading my blog for awhile, that I’m at least a little ashamed of having worked “in food service” for several years after graduating from college, rather than getting “an adult job.” (And yes, I know that’s a super snobby thing to say! But it was so hard during those years not to feel like I was wasting my life, and I still look back and wonder what else I could have done.) No doubt most of this embarrassment comes from that good ol’ tendency to compare myself to others, and I’ve got plenty of successful family members and friends with which to compare.

In a section called “Don’t Just Be the Hero,” (by which she means, be the narrator as well as the hero of your own story), Morgan recounts how she fell into a habit of trying to downplay her accomplishments, which included being a new mom, a doctoral student and part-time teacher, fearing that others would judge her as trying to do too much and being a financial burden on her family. Eventually, she realized that she knew neither of these things was true, so she was free to own them and say, “Yes, I’m doing these things, and it’s great.” Just as I am free to look back on my years of food service work and “own them”–to focus on what I learned, friends I met during that time, and the fact that somehow it all led me here to TulsaKids, which I’m so grateful for!

Tactic 4: Never Give Your All

One of the things Morgan discusses in this chapter is criticism: “Even still, criticism sucks. Embrace that it sucks and try to remember that some things are simply unavoidable. Some critiques will be outliers; some will be helpful; perhaps all of them will be hurtful. But in the end, all you can do is be the best you can, learn when you can, and let the rest go” (p. 197). The thought of criticism terrifies me–and I have a tendency to see criticism even if that wasn’t the intent (for example, I remember employee meetings from my coffee shop days in which I came away feeling like everything I was doing was wrong. In reality, 1) I should have been confident that I was doing a good job, because I was and 2) If you’re leading a meeting and everyone comes away feeling two inches tall whether or not they should, maybe you need to change your communication style. In any case, I can imagine how being less sensitive to criticism could lead to an increased confidence and growth. Because if you can’t embrace the critique enough to calm down and look for truth within it, you can’t grow from it.

Along with this, Morgan writes about how you should also be aware of the kind of criticism you yourself give. “I try to resist making catty comments, behind-the-back remarks, or mean-spirited gossip….I reserve criticisms for when I know the person is open and asking for feedback, and then I try to make it helpful and constructive” (p. 197). Uhhhh I wish I could say I do this, too, but…the fact is, it’s a lot easier to complain to a third-party friend about someone I’m having trouble with than to address a problem openly, respectfully and in-person.

Tactic 5: Get Out of Your Way

This chapter addresses perfectionism, and the ways in which perfectionism can be both positive and negative. Positive, in that it can encourage the perfectionists toward greater success, but negative, in that it can lead to a lot of self-criticism. I’ve always been a little proud of the fact that I’m not a perfectionist. I’m much more “get it done, and get it done quickly,” which has worked out pretty well so far because I’m pretty good at working quickly. But along with this caution against perfectionism, Morgan says “Realize that being perfect is not a goal, Imagine what you could be if you strove for excellence, instead” (p. 280), and I don’t know that I could honestly say I strive for excellence in all things. I’d say I strive for efficiency, staying ahead of deadlines and doing good work, but excellence? Could always do better.

Our January 2019 Hip Mom column talks about choosing a theme for the new year rather than making resolutions. I’m thinking one of my themes could be Excellence. To quit putting off doing things that I know would make improvements in my job and other facets of life.

I hope this blog post doesn’t read like too much of a downer; if it does, that could mean I don’t love self-reflection and/or that this book has messages that I–and presumably others–need to hear! Even if I don’t sound immediately empowered, the messages of “Everything Is Negotiable” are empowering. We CAN change the way we see ourselves and interact with others. It’s OK to ask for what you want out of life and to dream big. 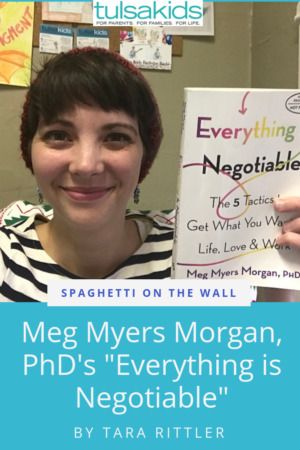